Well, it has been a while since our last post but here we are with a follow up to our study of the CPR pile trestle near Thalia, BC at Mileage 102.7.  This bridge was rebuilt several times over the years and we are modeling it with reasonable accuracy for the 1949 era.  We provide here some drawings with a few details and comments on how we built this miniature, focusing today on the bridge deck.  In preparing this post it must be said that it is not an easy thing to describe the construction of the model or the prototype and this is partly why we have taken so long to get to it.  As it is, this article will have to be broken up into several posts as it has already passed 2200 words.  Another reason for the long delay in posting is that we have been going through a major building boom on the layout with developments by the B&B gang, and the scenic and Rolling Stock departments.  And we assisted in making a motion picture of our operations which we will present eventually.
Much of the information presented here can be applied to other trestles of course, but this one has several features that are not usually found in the model railroad press: approach fills; a prototypical curve; a non-standard span to cross a roadway.  For this reason we will give some detail on its construction from actual CPR engineering documents and our model-building techniques.  To start with here is a photograph of our interpretation in HO scale of the Bridge at Mileage 102.7 on the Princeton Subdivision. 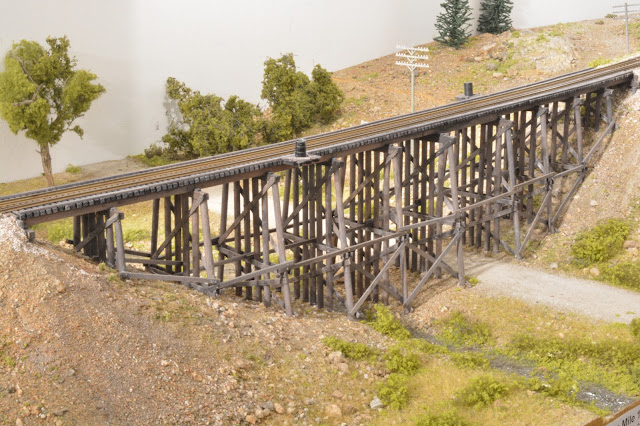 In considering a location for this bridge on the layout, we decided to make a small compromise in the overall length and number of bents.  There were14 bents in the photos and plans that we have presented earlier.  For the model, we felt that reducing that number to 12 would not seriously affect our reproduction in miniature.  All other dimensions and details are accurate.  Bridge Mi. 102.7 was one of numerous crossings of the Otter Creek between Tulameen and Brookmere which the VV&E and the KVR bridged with pile trestles for the most part though sometimes a frame trestle was constructed.  We count fifteen of them listed in Joe Smuin's book, KETTLE VALLEY RAILWAY MILEBOARDS.  They varied in size, some being a mere 30 feet long to the large one at Tulameen which is 334 feet long.  The subject of our study is some 200 feet in length but on the Kettle Valley Model Railway it has been shortened to 170 feet by eliminating bent Nos. 4 and 11.

We did retain the obvious features of the road and creek that pass under the bridge which we found to be very desirable in that they suggest there is some civilization in the area.  For the most part, the Kettle Valley Railway traversed a landscape that was fairly remote and unsettled.


Unfortunately, our model plan of the Thalia bridge deck was rendered illegible during its construction but we can offer some prototype drawings and descriptions of the process.  Here is part of the drawing which was presented in a previous post on June 10, 2015.  The construction of the bridge deck was typical for our era for both frame and pile trestles.  This drawing shows a straight bridge deck but most of the detail applies to the curved trestles as well. 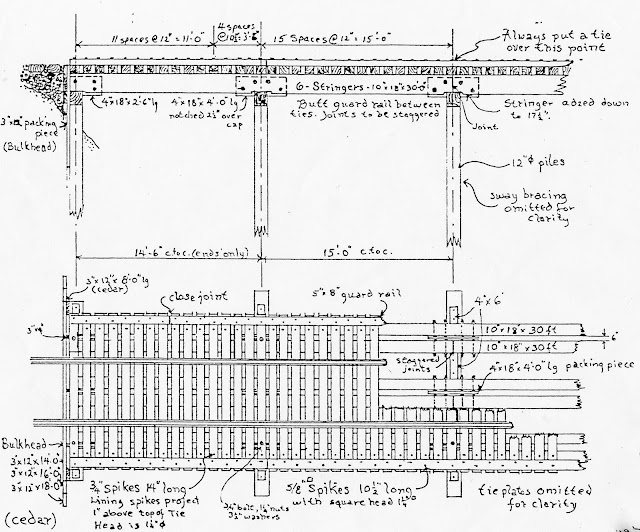 Next is a detail from an actual CPR drawing issued on September 3, 1957 which shows how the stringers are laid out for a curved trestle.  The plan for the "E-50 Loading" seems to match the drawings for other KV Trestles in our collection.  For the sake of clarity, the stringers have been coloured.  The pink stringer (A) is the longest one at the standard length of 30' and it is beveled a little at the ends as are all the stringers.  On the full plan which follows, a table is provided which gives the lengths of the other stringers according to the curvature of the track.  For a curve of 8 degrees, Stringer "B" is 3/4" shorter than "A" at 29' - 11 1/4". Stringer "C" is shorter again.  However, in building our model we did not use these measurements.  We simply placed the model timber directly on the plan and marked the cut line with an X-acto blade and then sawed it to length.  The slight bevel on the ends of the stringers was made with a file.  On the drawing below, note how the joints are staggered and spacers placed as illustrated.  These spacers were made of wood for the model version.  Also note that stringers are butted to each other on the centre of the 12" bent cap so that they each have 6" of bearing.

Here is the full page of the CPR trestle plan issued on September 3. 1957. 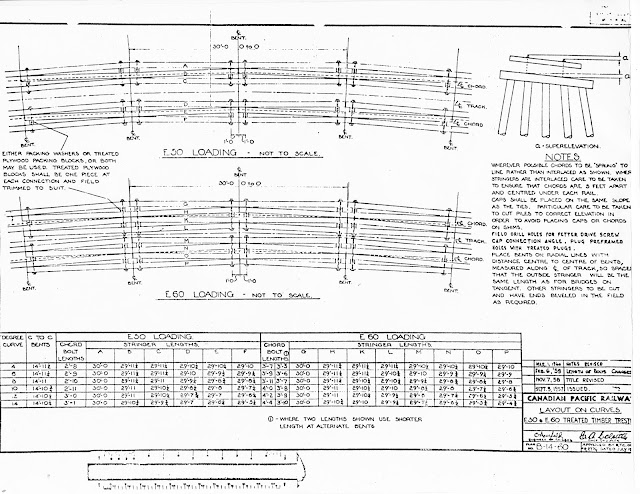 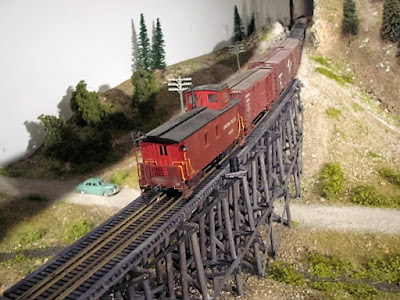 As an added challenge to our modeling efforts, the engineering drawing in our previous post (and see below) calls for a superelevation of 2 1/2 inches for the eight degrees of curvature in the track as it crosses the bridge.  This, we are pleased to say, was accomplished in the model.  It is evident in the photo to the right that the caboose is listing somewhat and the cars ahead of it are progressively straightening to the upright position as the rails are easing out of the superelevation and of the curve.  Standard railroad practice for superelevation is accomplished by lifting the outer rail while maintaining the inner rail "at the established grade line".  This practice can be followed in our miniatures as well but this really is a small detail that some modelers might determine to be not worth the added complication, especially if the viewing angles render it not so noticeable. 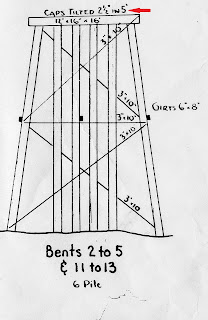 In a future post we will treat of superelevation in more detail.  For now we will point out the basic principle that as the curvature of track increases, the amount of superelevation increases and this applies to all track whether on a grade or on a bridge.  One other factor in determining the amount of elevation is sometimes called the "design speed".  This is simply the average speed of the different trains which use that track whether passenger or freight.
For our trestle, the plan calls for a curve elevation of 2 1/2" in 5 feet (see red arrow) which according to a table in one of our engineering books suggests that the design speed is 22mph.  The Kettle Valley was not renowned for its land-speed records. 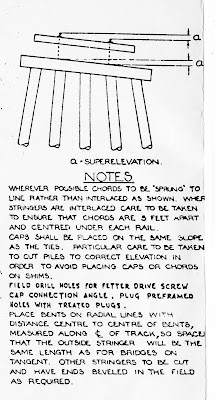 Taking another example from the same table, we note that a sharp prototypical curve of 12 degrees (in HO about 65" radius) and a design speed of 22 mph, the outer rail will be 3 7/8" higher than the inner.  This would be quite noticeable.  However it is likely that a curve of 12 degrees would have a permanent slow order of about 15 mph, so the superelevation would be reduced somewhat.
One further point to add is that a transition from level rails where the tack is tangent, to the full superelevation is accomplished gradually through the curve easement (aka spiral easement; transition curve; or tangent lead-in).
To the right is a blow-up of the "NOTES" in the upper right hand corner of the general plan given above.  In the figure is the letter "a" which is the amount of tilt or superelevation.  The word "sprung" suggests to us that it was preferable to bend the timbers or use their natural bow on broad curves rather than use a bunch of spacers.  This would not apply to stringers in sharp curves as in our case study.

We will continue soon with another post on the construction methods we used in building our model of Bridge Mileage 102.7 on the Princeton Subdivision.

Good to be back;