Our post today makes this the fourth in a series on CPR Pile Trestles and specifically, the Bridge at Mileage 102.7 of the Princeton Subdivision of the Kettle Valley railway.  They are unexpectedly long posts and there are still at least two to go.  This is a surprise to us as we only envisioned two or three maximum.  Here follow some interesting details which could apply to many railroad bridges and trestles.

Barrel Platforms: In each of two places on the 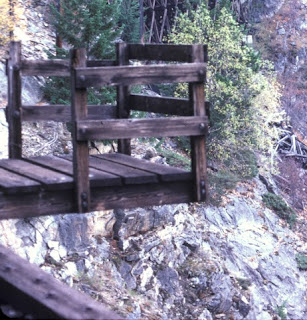 deck of our trestle, 3 ties were omitted to allow for construction of the water barrel platforms.  The three empty tie spaces were fitted with 8" x 8" x 17 foot long ties to support the platforms.  Upon the tops of these ties were placed five or more planks for the platform itself. Our observation is that the platforms were placed on alternating sides of the bridge and in the case of Thalia trestle, they were located such that they were roughly equidistant from the ends of the bridge and from each other.
We provide here a CPR drawing which is taken from the set of plans dated September 3, 1957 but there are some minor differences from earlier construction practices to note.  One factor in considering these dimensions, is that by the date of this plan, 1957, specifications for bridge ties on trestles had reduced the lengths of bridge ties to 10 feet in length from the earlier standard of 12 feet.  But the size of the platform was (thankfully) increased so that the platform ties were still 17 feet as specified in the drawing.  This later version is seen in this photo by Dave Love.  The barrel is long gone as the Carmi Sub had been inactive for some time by the date of the photo.

First a few words of explanation of the abbreviations.  The "S4S" note means that the railing boards were surfaced (i e planed smooth) on all four sides.  The abbreviation "Rgh." for the platform floor boards stands for "Rough" which means that these boards were not surfaced thereby affording some measure of grip for work boots.  These platforms are called refuges in other places.

One feature which this drawing from the 50's and the photo above reveals is that the platform had safety railings.  This was not the case for bridges from earlier times where the specifications made no allowance for them.  (One surmises that old timers were a hardy bunch with an acrobat's sense of balance.)  The arrangement in this case can be seen in one of the detail photos, two 2' x 4" boards being placed in a "V" to prevent the barrel from falling off the platform.  Nothing else.  Old timers must have gripped the barrel (with white knuckles?) if caught out on the bridge as a train approached.   But the structural support of the platform is the same in both eras.  Here are two views of the model. 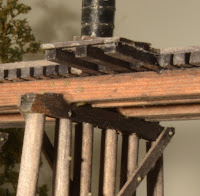 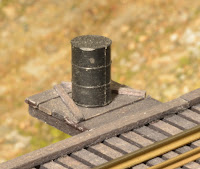 The barrels seem to have been the standard steel drums of 55 gallons capacity with a cover, although some photos show them uncovered.  In earlier years the barrels were made of wood.
We provide here some interesting excerpts about these platforms from an engineering book of the Pacific Great Eastern Railway Co. issued in 1939.

The book is entitled: MAINTENANCE-OF-WAY Rules and Instructions.

398. ...Those [barrels] at the ends of bridges and trestles must be placed 12 feet from the structure, and those along the deck must be secured to platforms outside of the outer guard rail.  A four gallon pail, in the bottom of which two small holes have been punched, must be placed inside of each barrel, and each barrel must be provided with a cover and kept covered.

As to barrels situated at the ends of CPR bridges, there seems to be some correlation with the PGE practice, but only in some cases. In the example of the 100 foot long girder bridge at Brodie there is only one barrel and that is located at the west end as can be seen in this shot from 1989.  In photos from earlier eras, no barrels are evident.  Early photos of other bridges show barrels buried in the ground with only a foot or so showing above the grade.  As to trestles of the 1940's through the 70's, the only barrels we have observed in photographs are those placed on the platforms.


The next component for the wood deck is the outer guard rail which by the 1950's was called a "Tie Spacer".  This was made of 5" x 8" material.  We substituted 4" x 8" boards which was the later practice and the closest commercial size available.  It is also advantageous to have this plank a little lower than the railheads to allow cleaning of track without scraping it.  Been there; done that.

N-B-W's: A few nut-bolt-washer castings could be added to the ties that are situated over the bent caps.  They are barely visible in the overhead shot of the previous post.  In that same post, the close-up shot shows the n-b-w's applied to the Main Stringers.  More on these items in the next post on the construction of the bents.

Rails: We use Floquil solvent base paint to give the rail a rusty look.  Rail Brown will do or in our case we mix equal amounts of Rail Brown and Rust.  Fortunately, we acquired a goodly amount of these paints shortly after the announcement that Floquil paints was ceasing production.  There are alternatives available.  The tops of the rail are cleaned off in preparation for installing the rail to the bridge deck.  The main rails are code 70 and the inner guard rails are code 55.
Four or five squares of masking tape are placed on the bridge deck and the position of the main and inner guard rails marked out.  Slots are cut in the masking tape the width of the rail base to guide in the positioning of all four rails as they are glued down.
To affix the rail to the ties, we use Pliobond glue which is a solvent-based contact cement.  Walther's Goo or standard construction contact cement will work as well.  A generous coating on the bottom of the rail is applied and allowed to dry.  This can be a messy job in that the glue will easily smear on the sides of the rails.  We did manage one or two smears even though there was no need to hurry the job.  Normally contact cement is applied to both surfaces but a coat on one surface will do here because by applying heat from a soldering iron to the top of the rail, and working slowly from one end to the other, the rail bonds with pressure to the ties quite well.  It can be reheated and adjustments made soon after or even months later.  In our case over the years, we have had to make a few adjustments due to movement from seasonal expansion.  Once or twice we have had to work a little fresh glue into the joint.
The spacing of the main rails was done with standard rail gauges.  Our preference is Precision Scale Co. # 4958 but the rail spacing must be critically checked with NMRA gauge after placement.  The inner guard rails are spaced at 2' - 5 1/2" on centres according to CPR specs.  For these rails we cut a short block of wood as a guide at .310" which is close enough for the distance between the code 55 railheads in HO.  These rails are centered between the main rails.

Here is a photo with measurements. 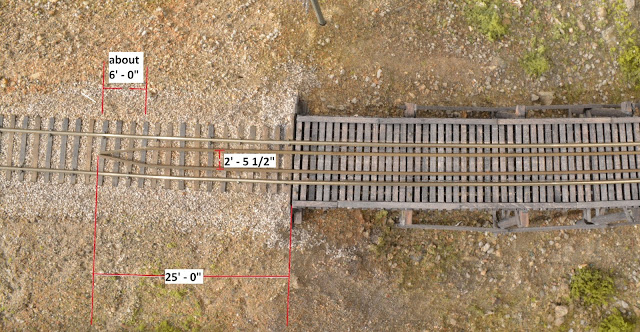 And part of the CPR drawing. 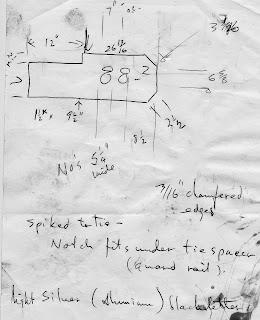 Mileboard: One final detail for the bridge deck is the mileboard which can be seen in the crop from a photo in our collection which also shows the barrel platform.  This is the bridge near Portia at Mileage 33.9.

To the right is a sketch with some field measurements of a sign long forgotten; perhaps from the Myra Canyon.  The prototype is cut from a 2" x 10" plank for outside measurements of about 1 1/2" thick X 9 1/4" wide X 39" long.
We made our tiny model on a Word Document along with many other signs and mileboards.  It can be seen in a photo above.  The paper signs are cut out and affixed to a piece of styrene for strength; one for each side of the styrene.  These mileboard signs seem to be placed on the  engineer's side of the track when facing East.  This is not necessarily a CPR specification but simply the consistent observations we have made on various bridges in the field and from photos.  On the other hand, it could be that the signs were placed on the same side as the telegraph poles where the regular mileboards were posted.

Whew.  Glad that is done.  Questions to clarify things are welcome.  More to come on the bent construction in a week or two.