We continue our study of the curved trestle at Mileage 102.7 on the Princeton Subdivision with a description of some of the techniques used in constructing a model of it for the benefit of those readers who may be considering building a curved trestle of their own.  As is often the case in construction, curved structures are ten times more challenging than straight ones.  But in the case of this bridge, the roadway span introduces a further complication.  Trying to describe the process is a challenge of its own.

Here is a bird's eye view of the bridge deck showing its eight degree curve and the oversize roadway span.  You can enlarge it by clicking on the photo or by using your computer ctrl and + keys.

Layout: The actual Thalia trestle was built on an eight degree curve which in HO is about a 98 inch radius.  No, that is not a mistake - slightly more than eight feet.  In O scale the radius would be 14' - 10" and in  N scale about 54".  For our model, we made an accurate plan starting with a centre-line and marking out the position of the bent caps and laying out the stringers.  To obtain the centre-line, an arc was drawn on a large sheet of paper to this 98 inch radius using trammel points and a long stick.  The photo to the right was downloaded from the internet to illustrate what we mean.  To repeat, this arc would be the centre-line of the bridge when laying out the deck and locating the bents.  The paper was then permanently mounted on a flat softwood board as a working surface on which to build the bridge deck.  A wood template of the 98" radius was also cut and trued up to assist in aligning the bridge ties later on. 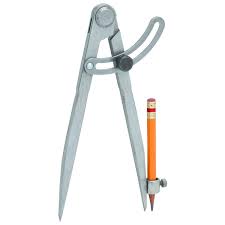 Once the arc was drawn, the main tool for accurately laying out the placement of the bent caps and the stringers is a compass or divider set. In order to locate the bent caps, we simply draw perpendiculars to the arc at about a scale 14' - 10" on centre.  Of course, the span over the road is larger requiring centres at 19' - 10" apart.  Perpendiculars to an arc are erected in the same way as perpendiculars to a straight line if you remember your high school geometry.  Here is an edited description and drawing from an old trades publication.


To Erect a Perpendicular to an Arc of a Circle, without having Recourse to the Center. – In the figure, let A D B be the arc of a circle to which it is required to erect a perpendicular. With A as center, and with any radius greater than half the length of the given arc, describe the arc x x.  With B as center, and with the same radius, describe the arc y y, intersecting the arc first struck, as shown. Through the points of intersection draw the line F E. Then F E will be perpendicular to the arc, and if sufficiently produced will reach the center from which the arc A B is drawn.

Stain: Before we go too far we should interject here that all scale lumber was soaked in a pot of stain, specifically Hunterline's "Creosote".  We wish that the stain was a little more concentrated so that occasional darker results were possible without having to soak them several times.  It is easy enough to dilute a stain but strengthening it is not so simple a process.  Most components had been cut to exact or rough size beforehand and after soaking, allowed to dry thoroughly.  We should also add that no progress photos were taken as solving the unique challenges of this particular project required a fair amount of concentration and experimentation.  With the arc and perpendiculars drawn in, we turn to the actual construction outline as much as we can remember it.

Layout continued: These perpendiculars are the centre-lines of the standard bent caps which are specified as being 12" x 16" x 16 feet long.  There are two larger caps for the bents flanking the road which are 14" x 18" x 18 feet long.  Using dividers set to a scale 8 feet, we set one point on the intersection of the arc and the perpendiculars with the other point/pencil marking out the two ends of the bent caps (9 feet for the larger caps).  The scale lumber for these bent caps was cut and would be placed in position on the drawing.

The next paragraphs and photo deal with the allowances that must be made for this particular trestle with its non-standard roadway span, so the reader may want to pass over them for now and jump to "Superelevation" for a plainer outline of a normal curved trestle.


At this point, some full length temporary shims needed to be inserted under the standard caps to account for the oversize timbers of the roadway span.  There are two factors here.  One is the 6 inch difference in the stringer depths. This difference can be seen in the photo that follows.  It is noted in the elevation drawing in the previous post. There is also a 2 inch difference in the thickness of the bent caps; for a total height difference of 8 inches.  These shims were tack-glued to the underside of the bent caps.  The purpose of these shims is to bring the tops of the stringers level for placement of the bridge ties.  Keep in mind that when the bents are built, those flanking the roadway will have to be this same 8 inches shorter than the standard ones.  Finally, a permanent shim needed to be placed on the larger bent caps in order to bring the standard stringers even with the heavy ones spanning the roadway.  This shim is 6" high x 6" wide x 11 feet or so in length and was positioned over half of the bent cap that flanks the roadway.  See the photo below.

In addition, one can reference Dave Love's photo of the prototype (published on the June 10th post) which clearly shows the difference in elevation of the caps of bents 8 & 9 compared to the others.  The shim in the above photo shows what is only a best guess as there are no specifications on hand for this part of the bridge and the original was destroyed some time after abandonment.

Superelevation: For any trestle built on a curve, a tilt is specified in the engineering drawings.  To produce the tilt called for in the drawing, all caps were elevated on the outside edge with temporary scale blocks of 8".  This is close enough for a 2 1/2" superelevation in 5 feet.  It was important to build the tilt into the deck as the components were being assembled and glued so that the deck would sit naturally on the bent posts without twisting or distorting.  The caps were held in place on a flat board by pins and/or spot glue.

As mentioned earlier, the varying lengths of the stringers were marked with an X-acto knife after placing them in position directly on the plan.  The stringers were all glued to the caps and to each other and to the spacers in accordance with the colour-coded drawing in the previous post.  Except for the larger span over the roadway in which case the six stringers were laid parallel over the span.  Common white glue was used for all wood joints.

Bridge ties:   As mentioned earlier, bridge ties had been previously cut to length and then treated with "creosote" and left to dry thoroughly.  Mount Albert Scale Lumber was the choice for the 8" x 8" x 12 foot long ties.  Note that one tie is placed directly over each of the bents.  These critical ties were placed with care and allowed to set hard before the rest of the ties fitted in between at about 12 inches on centre.  To aid in alignment of the edges of the ties, we employed the aforementioned template of 98" radius.

Now that the deck has had the ties placed we will cover in the next post some interesting details that give the bridge deck a lot of character: water barrel platforms, rail and guard rails, mileboard and a few nbw's.  We welcome comments and questions.