The Bridge at Mile 102.7 is an interesting example of a C.P.R. Pile Trestle.  The example shown in the accompanying photos by Dave Love is the most modern version, the bridge having been rebuilt several times since first constructed in 1914.  We see the standard 15 foot spans but there is a unique twenty foot span towards the centre that crosses a country road.  Unfortunately, the span is somewhat obscured by the foreground trees but it is still a useful shot.  Regrettably, the trestle is no longer standing, as some cruelly irresponsible vandals torched it about five years after the rails were lifted in 1990.   Another interesting photo taken by Dave when the bridge was still in service was shown in the last post 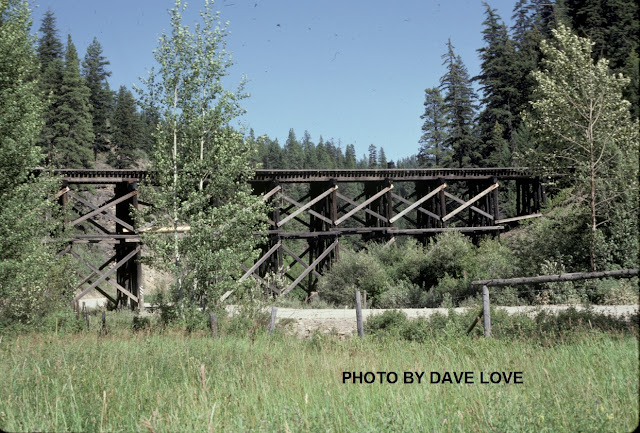 The road runs from Princeton to Merritt; however, on our earliest drawing it is identified as the Nicola - Princeton Road.  The winding gravel road is still in use today for business and recreation.  Occasionally, cattle are seen wandering along the road as there is significant ranching conducted in the area.  There is also a small watercourse running beneath the trestle called the East Fork of the Otter Creek.
Next we see the other side of the bridge.  The creek is on the left of the road and we are looking roughly south.  Immediately apparent in this view is the extra wide span to accommodate the gravel road. 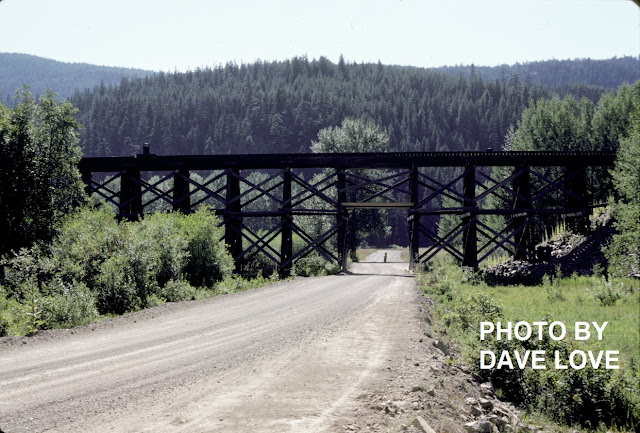 We had the good fortune to ride over this bridge in the way freight shortly before abandonment in 1989.  There was a permanent slow order here due to some bad track in the long curve leading to it.  The train crew said that this was the only bad track on the whole 177.8 miles of the modern era Princeton subdivision.

Here is the original Station Ground Plan with some identifying labels inserted by us.  The original was drawn in the plan office of the V. V.& E. likely around the time of construction.  The Trestle is identified as BRIDGE No. 543.
Numbers refer to features as follows:

Next is a close-up of the bridge area from the drawing.  V. V. & E. practice was to show two lines for the track whereas CPR practice was to draw only the centre-line.  The original bridge was a Frame Trestle of 15 Bents according to the drawing.  Later rebuilds possessed only 14 Pile Bents as will be seen in later drawings.  When the fill approaches were originally done it appears that the creek underwent a diversion or "channel change".  The trestle was built on the 8 degree curve .  Note the Section House which was standard Great Northern design and its outhouse.  Ironic that the outhouse was designated a "W.C." (water closet) when of course there would not have been any running water within.  The remains of a small structure are still to be found in the high grass in this area.  This looks to us more like a root cellar built partly into the hillside which was common enough in the early days before the modern convenience of refrigeration.  Joe Smuin, in his book, Kettle Valley Railway Mileboards states that the house was removed sometime before 1953.  Note also the Flanger signs either side of the Bridge. 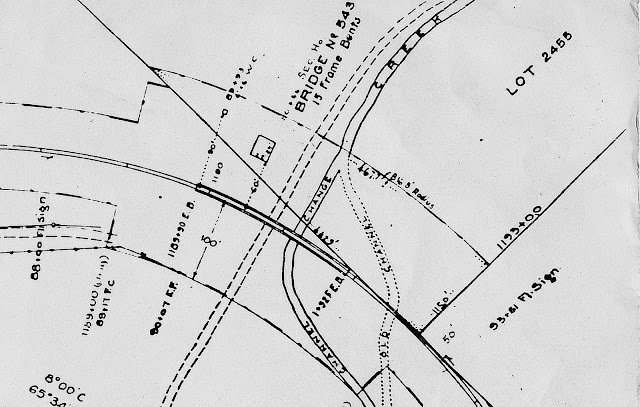 We include another drawing which is not essential to modeling but may be of passing interest to readers. This is a small portion of the Grade Profile Roll from a much later era which shows the bridge in question. 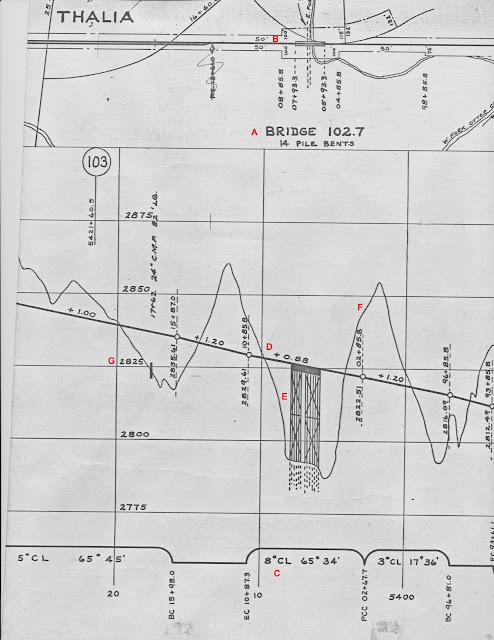 We will try to interpret some of its features.  Typically, the centre portion has the vertical scale exaggerated for clarity.  First we see the identifying label: A BRIDGE 102.7 and 14 PILE BENTS.  At the top we see a straight line B with the bulging section depicting the unfolded plan view of the bridge.  The line is straight but directly below at the bottom is the indication C 8 CL that the bridge is on a curve of 8 degrees left (when looking West).  The grade at
this point is 0.88% rising westward to Brookmere.  In the middle is a sloping line D, and a schematic drawing E of the bridge showing the 14 bents.  The "X" marks suggest the longitudinal bracing and the bridge has two stories.  The wiggly line F crossing and recrossing the sloped Grade line is the original grade of the soil as found on the centreline of the track when the railway was first built.  Of course the high spots were brought low or cut through and the low spots were filled in.  On either side of this trestle, long fills were placed at the approaches.  The low point to the east of the bridge schematic may have been the original bed of the Otter Creek which we know from another drawing was filled in and a new channel for the stream dug near the road.  At G is a number (2825) and line which represents the elevation in feet above sea level.  The short heavy line nearby represents a culvert designated 24" C.M.P. which could be a 24" Corrugated Metal Pipe.  The circle with the number 103 is the milepost measured from Penticton.

This next drawing is presented in two parts and should be very helpful for modeling purposes.  This view shows the profile of the bridge.  It is dated 1956 and 1962.  The E-60 inscription denotes the Engineering standard of this bridge which is heavier than an E-50 which was more typical of the 30's and 40's.  There are more piles per Bent and heavier bracing.  Stringers may be heavier as well.

Note that the bents are numbered from east to west which is the usual engineering practice for the CPR.  The twenty foot span requires heavier timbers for the stringers.  The increased depth of the stringers (26") is accommodated by setting adjacent bent caps lower by 6".  The adjoining standard stringers (20" high) are shimmed up with 6" packing pieces to make up for the difference in depth.  We do not posses a photo that shows this clearly.  The longitudinal bracing of the elevation drawing crosses alternate bent spaces but the photo at the top from modern times shows every bent space braced.  To the lower left are found the details of the Ballast Wall or End Bent. One photo from the 1940's shows an even different bracing pattern.

Here is the second part of the drawing which shows each of the other bents in greater detail and the title block. 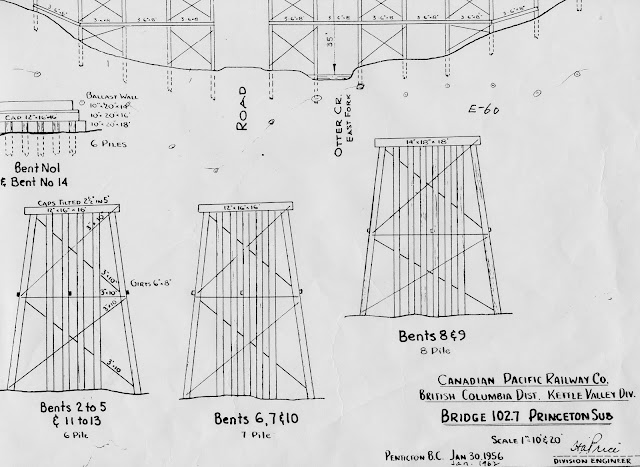 Note the tilt of the bent caps to provide for the super-elevation on the 8 degree curve.  This is a challenging but effective modeling detail to incorporate if possible.  Bents 8 & 9 have 8 piles to give extra strength for the twenty foot span.  The placement of the 6" x 8" Girts and 3' x 10" cross bracing are shown here.  Not shown is the table of "Penetration of Piles".
From this drawing and a few photos we built a fairly accurate model which will be presented in our next post.