Train Nos. 45 & 46 ran daily between Penticton and Vancouver.  They first appeared in the April 27, 1947 Timetable but were discontinued when the September 1954 Timetable was issued.  These trains were always steam powered.  Engine 5212 was the last steamer to run in scheduled service on the Kettle Valley railway.  It ran Penticton to Vancouver as No. 45 on September 26, 1954.  The typical consist of the Penticton trains to 1949 is presented here with a note on changes in 1950.

No. 45, the Westbound is drifting downgrade past the Coquihalla Mileboard with a 5200 on the point.

The 5200's were very new in 1949 having been converted from N2 class Consolidations and many were assigned to the southern route.  This model was not rebuilt out of an N2 Consolidation but from a USRA Mikado by Athearn with extensive modifications to the superstructure, a snowplow added and a new tender.  A Tsunammi sound decoder was installed.  Some further details are still to be added because this locomotive was rushed into service before completion for an impending operating session.  And we will have to tone down those flashy side rods a tad.

We begin again with mention of the head-end express boxcars which were used for  "PASSENGER MERCHANDISE SERVICE" in passenger trains in the 40's and 50's.  As described in the previous post, they carried express lcl freight to and from customers in the major towns across Canada.  Each car in a train could be destined for a particular city or two such as Nelson, Cranbrook, or Penticton.  They were boxcars randomly taken out of the series 226000-228799.  They were originally built in 1937 and when selected for the new service were assigned a number in series 29019-29094.  They were "EQUIPPED FOR PASSENGER TRAIN SERVICE" with passenger-style cut levers, steam and signal lines.  Their paint scheme was modified by painting the roofs and ends black.  They retained the flat panel roof and square corners, 5/5 dreadnaught ends, Canadian ladders and wood roof-walks.  The basis for this model was an Intermountain Railway Co. model kit (40799) with these specific features added.  I believe Red Caboose once offered this model kit. 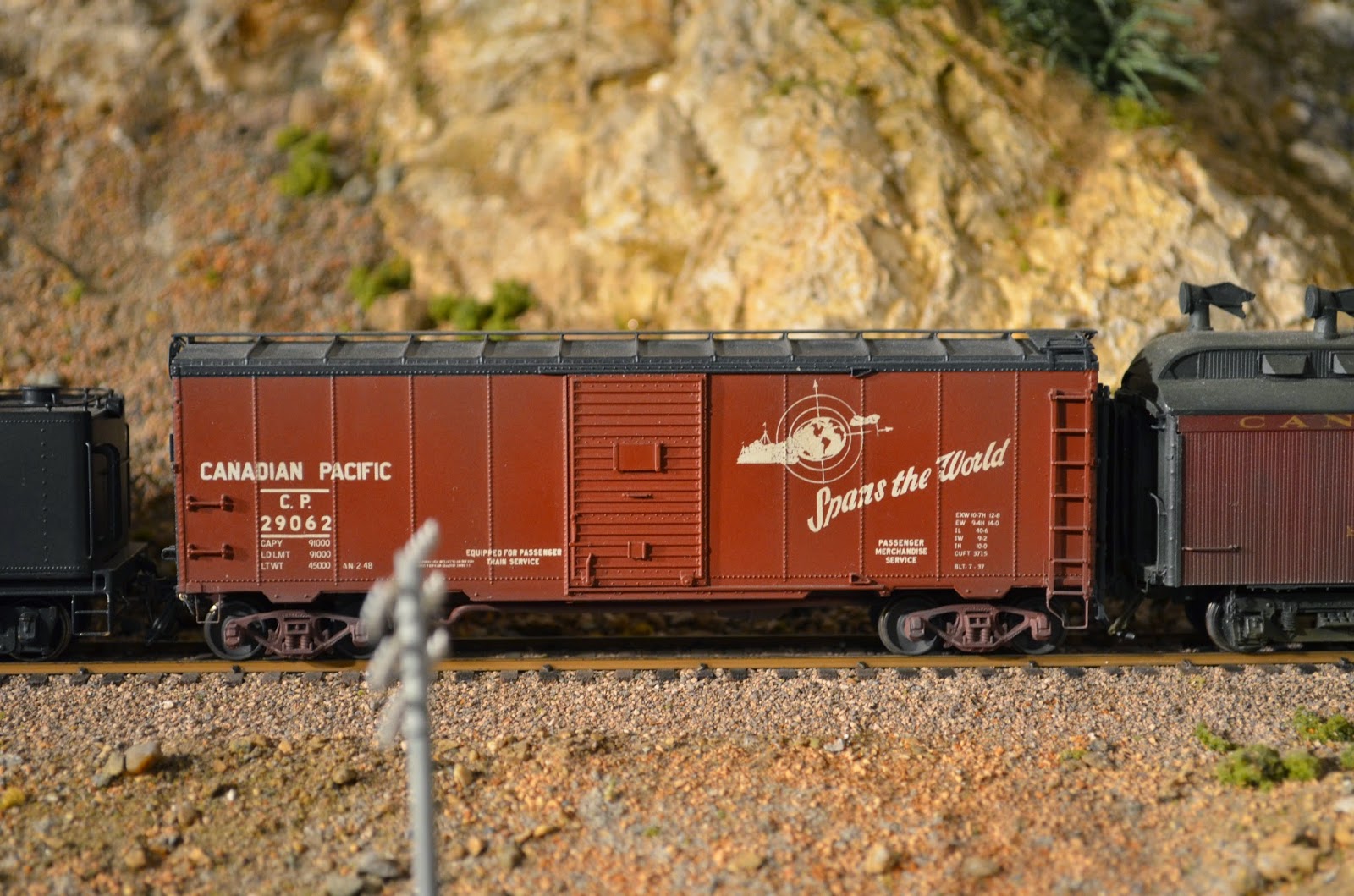 On the trains originating in Penticton, there were various ways of shipping the seasonal fruit.  Here is a wooden baggage car adapted to carry fruit (in addition to express & baggage?) with roof mounted vents for circulating fresh air through the car from end to end.  It was often referred to by the railway men as a "Blower Car" .  Express reefers and freight reefers would also carry the fruit.  This one was exquisitely crafted by Andy W Scale Models: http://www.readytrain.com/catalog/index.html

Here is a Heavy Weight Baggage Car built and finished by The BGR Group: http://home.cogeco.ca/~bgrgroup/  This car was often run on Nos. 45 & 46 and sometimes on Nos. 11 & 12 in late steam years.

The next car in the Penticton trains were the coaches.  Sometimes a smooth sided 2100 series coach was assigned but often it was a heavyweight as pictured here.  Number 1436 was built in the mid 1920's and there were 45 cars in its class.  It had seating for 72 passengers in the main room with seats in the smoking room for 8.  Model built and finished by BGR.

There was a sleeper assigned and it was usually a 12 & 1 as described in the last post.  This model carries the old-style lettering in gold.  This was eventually changed to the so-called "dulux gold" which contrasted more strongly and nicely with the deep maroon body colour.  Another BGR-built car.

For the first years of its existence, Nos. 45 & 46 advertised a Sleeper with 1 Drawing Room and 4 Compartments.  In the M.P.-14 for 1950, it was called a Buffet Lounge Compartment Sleeping Car and was named after Canadian Lakes such as our "Lake Windermere".  At the non-vestibule end of the car was a Buffet Kitchen and 3 or 4 dining tables as well as a few lounge chairs, hence the long name.  They seemed to vary somewhat in layout and there is one preserved in the museum at Squamish, "Lake Megantic".

The Lake car and the 12 & 1 sleeper were the last cars in the train and either could bring up the rear.  If the Lake were last, I presume that it was oriented such that its vestibule end would carry the markers.

In September 1950, the Penticton trains no longer listed dining or buffet cars in the Public Timetable and I cannot say what passengers did for meals.  Along with that change there was another: the "N" or "S" 12 & 1 sleepers were replaced with "R" sleepers of an 8, 1 & 2 configuration which means 8 sections, 1 Drawing room & 2 Compartments.  These were usually the "modernized" versions with wide windows, the interiors being decorated with plastic laminate, chrome, and painted - so 50's.  No more of that dreary Mahogany stain with gold inlay!  One day we will produce an "R" such as Ravenscrag, Ripples or Ruby Creek but it will be the original body style with paired windows and antique interior.

Occasionally, a unique car may have appeared in the consists of any of the K V passenger trains we are discussing.  It shows up in diesel days for certain.  It was called a Baggage and Express Car in the M.P. -14, but I believe it is also called a "Through Baggage" at least informally.  It was converted from a "Silk Car" after the CPR no longer needed them for transporting that commodity in the speedy trains across the continent.  They were 45 feet long, of all steel construction and were built in 1925-27.  Specific Nos. are 4447, 4452, & 4457.  Usual position was at the head end right after the PMS cars and reefers.  This superb model was built in a limited run by Andy W scale models. http://www.readytrain.com/pages/intro.html

Another passenger coach that was commonly seen on the Kettle is a Combine which ran for many years on the "Jitney", a mixed train on the Merritt Subdivision, Nos. 805 & 806.  It also ran weekly in a mixed train on the Coquihalla Sub prior to September 1949.  This very nice model was again built by Andy W Scale Models.  Early Gold Lettering.

This concludes the memorial tribute to the inestimable Dave Hanas who will be buried from Saint Peter's Church in New Westminster on Friday.  Goodbye my friend.  Your models will continually remind us of your passion, your humour and your goodness.