COAL ON THE KETTLE: COAL GONS

In considering the movement of coal on the Kettle Valley, an aerial photograph of Penticton yard in 1948 presents useful evidence for a modeler of the Southern Mainline in steam days.  The website is Vintage Air Photos and if the specific item does not immediately come up, try keying in "Penticton Saw Mill" in the Search box.  http://vintageairphotos.com/bo-48-3540/  The photo is a fantastic source of information for us modelers as we can zoom in for close examination of the detail as well as get a big picture of the railway in the late steam era.
On one of the Penticton yard tracks we see a string of six coal cars and two more on the service track of the coaling plant.  These latter two are definitely hopper cars - most likely they are Twin Hoppers.  There appears to be one Triple Hopper car and a Twin on the yard track and 4 low gondolas.  In addition, there are several other coal cars in the tracks beside the string which on close examination, also seem to be Twin Hoppers.  By the heights of the loads, it could only be coal as no other mineral is piled so high in an open top car.  It is also very neatly trimmed, which suggests a major coal shipper.  It is doubtful that the coal is going East, so we can speculate with some degree of certainty that it is going West, having  originated at a large mine in the Crowsnest area.  Whereto is an open question.

In the 1949 CPR equipment register, the M P - 14, there is a classification called "Gondolas - Coal" or in earlier M P 14's a variant: "Gondolas  (Coal Sides)".  These are the other cars in the string already referred to in the aerial photo.  There were several types used over the years and for our modeling era we present 3 models of the 4 most common prototypes.


The oldest car in the late steam era was probably what some modelers call the "Low Otis" which hauled many, many tons of coal into the early 40's. Built in 1906-12, only a few survived to 1950 and many of those only in cinder service. Railroad Model Craftsman carried a thorough set of articles on the prototype and the model in the Dec 1987, Jan '88 & Mar '88 issues. Ken Goslet wrote the prototype articles and Eric Clegg built the model and wrote about it. Clegg extracts statistics on the "Low Otis", stating that there were 500 in service in 1945; 174 in 1948; 43 in 1958; with 19 hanging on till 1964. Number series can be perused in the article. In the 1953 ORER page reproduced above, only one can be positively identified and matched with the roster list in the RMC article: CP 345685. But from the teens to the early 40’s these cars were abundant; over 2500 being built. For our layout, we have two intended for OCS but as yet only one finished. The bodies were cast in resin under the brand, Scale-Craft Models, 20 years ago or so by Mr. Don Hough, a local model-maker. Here is one of them:

Here is a fine model representative of the "Big Otis" drop-bottom, composite cars with 8 doors each side.  This model was produced by Overland Models and is of brass construction.  The brass trucks were not functional and have been replaced with Bowser plastic trucks: PRR 70 ton Crown.  A wonderful model of an important car.  There should be more of these models in our roster and we may add a few using the resin kit by Funero And Camerlango: http://www.fandckits.com/HOFreight/6280.html.  Though built in the 1920's with wooden sides, there were still 1199 of these cars in service in 1949; with 697 functioning as late as 1965.  The listing for these 350,000 series cars will be found underneath the red line in the ORER page reproduced below.  see Riddell p. 80.  see CFRG  http://freight.railfan.ca/cgi-bin/image.pl?i=cp351214&o=cprail

In 1937, another composite car was produced and it is pictured here in a poor photocopy reproduction of a prototype photo in my collection.  I cannot remember where it was taken - possibly Brookmere - and how I got it.  Not much doubt about the cargo being coal as the trainmen are helping themselves to a bucketful for their stove.  Probably better coal than what the CPR supplied.  Going by the built date appearing on the car side, I suspect the photo was taken between 1937 and '39.  It is listed below on the ORER page.  Another series is listed on the page: 352000-352169.  This seems to be identical and Riddell supplies colour photos of them on pages 82 & 83.  Total numbers then are 370 built.  These lasted a long time, the Riddel photos being taken in 70's.  No model produced, but it is tempting... 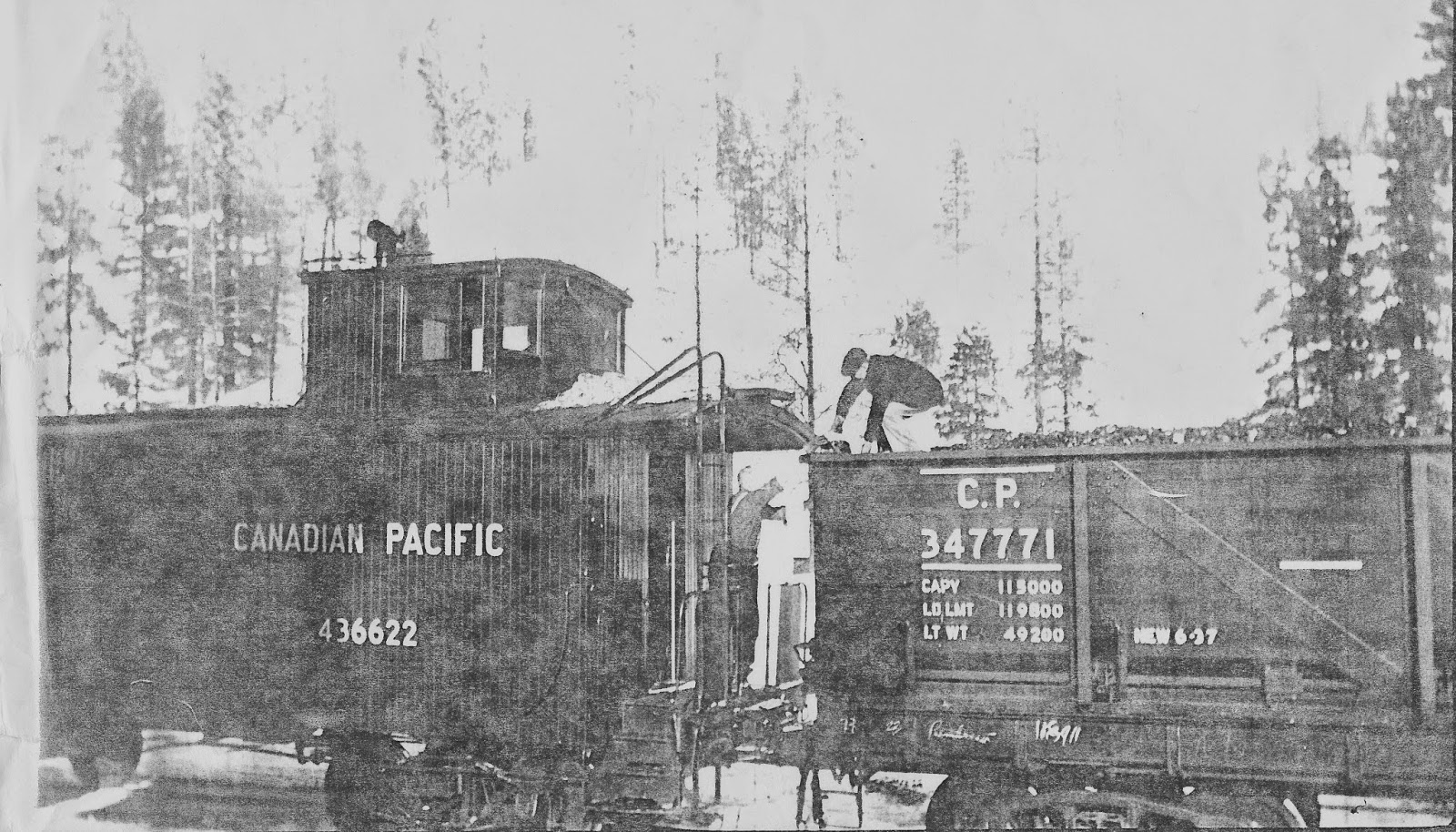 Next is the 348,000 series of drop bottom gondolas which fast became useful in Western service.  They were used for coal but more-so for transporting copper concentrate to the smelter in Tacoma.  For our era, the concentrate came from the mill at Allenby on the Copper Mountain Sub.  As noted in a chart below, our scale reports show that in the 60's, concentrate was shipped out of Greenwood to Tacoma.  Before these cars came on line in 1948, it would seem from photos of Allenby concentrator, that the concentrate was moved in box cars.
This model is really a stand-in as there is no commercial version that is even close to the prototype.  Perhaps a rendition could be manufactured with the new technology known as 3-D Printing.  This stand-in is made of two MDC gondolas cut and spliced to give the high sides it needs although the vertical ribs are lacking in detail and placement.  The horizontal joint is somewhat visible.  A set of 7 was built from 14 body shells cut up on a table saw.  Basic dimensions are given in the M P 14 but the ORER has more detail which is advantageous for duplicating or approximating in scale.  The overall dimensions of this model are close so that the original ribs could be removed and more accurate ribs fabricated and rivet decals applied.  One of these days...  see Riddell p. 81,82. see CFRG  http://freight.railfan.ca/cgi-bin/image.pl?i=cp348697&o=cprail

Here is the upper part of the relevant page from the ORER for CPR Gondolas with the 348,000 series underlined in red.  Looking up to the column headings one can obtain critical dimensions. 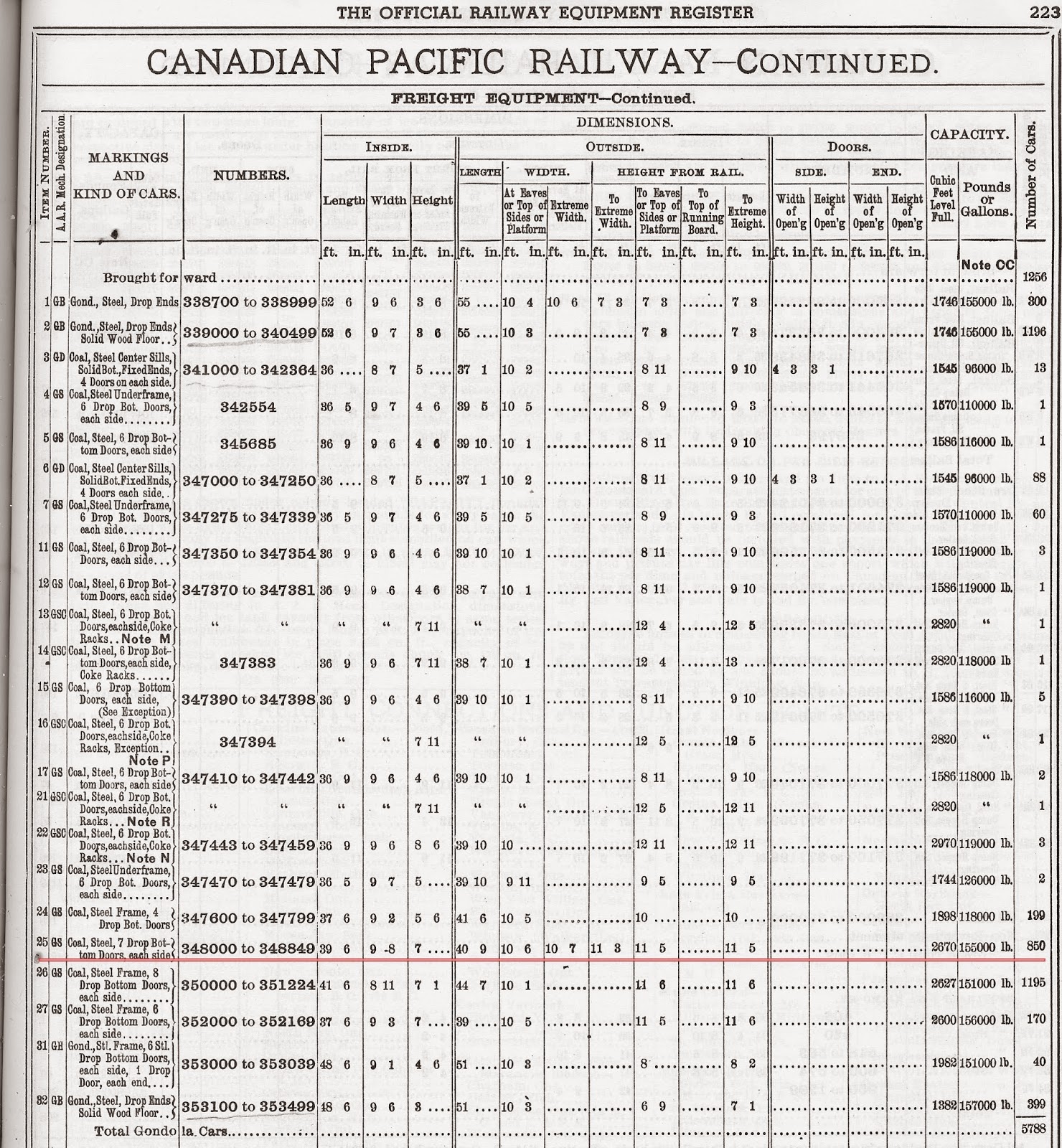 Besides the M P 14 and the ORER mentioned in this and the previous post, we have in our possession a copy of the daily scale reports of the Penticton track scale for the entire year of 1961.  This "book" provides some helpful insight into the on-line origins and far-flung destinations of freight cars and their respective loads.
In 1961, 150 carloads were shipped in the Big Otis and the High Steel Gondolas Westward.


There were no Eastbound carloads weighed and no coal loads at all weighed in Penticton.
Some car numbers repeat as many as 5 times appearing in near consecutive months such as Car CP 348922 being weighed once each in June, July, August, October, November.  Most cars appear only once.

In conclusion, it seems safe to say that:


Due to my personal schedule, posts will normally be done on Fridays as with this post.  Next Friday is the beginning of our annual Trains convention at Cameron Recreation Centre. The week after that we will treat of Mill Gondolas.   The Kettle Valley Model Railway is a participant in the show.  Might see you there.