COAL ON THE KETTLE: HOPPER CARS

Analysis of the CPR's national roster for 1949 reveals that hopper cars comprised a mere 4% of the fleet and gondolas a little more at 7%.  However, we suggest that their representation on the Kettle Valley was significantly more due to British Columbia being rich in mineral resources.  According to a current B C provincial website, "The province is Canada's largest exporter of coal, largest producer of copper and only producer of molybdenum. B.C. also produces significant amounts of gold, silver, lead, zinc and construction aggregates, and a variety of industrial minerals."

B C coal and minerals were also significant in the twentieth century and in addition, there were many mines in Southwestern Alberta which, we hypothesize, shipped a portion of their output Westward along the southern route.  In 1960 Port Moody became the terminal for Crowsnest coal but before that we have not determined a destination on the west coast.  Despite this historical uncertainty, we are sure that modelers of the KV need a goodly supply of Hoppers and Coal Gondolas to transport this cargo across our layouts.  For our layout, we also have need for a few coal cars for the smaller mines of the Tulameen valley.  By the time of our modeling era, the mines of the Merritt region had played out or were considered low value coal and not worth the investment of extracting.  Coalmont had been a significant shipper of high grade coal from Blakeburn Mine until its closure in 1940.  A few years later coal mining did resume on a smaller scale and by 1947 Coalmont was shipping "15 to 18 cars of coal per week from" to Princeton for the Granby power plant.  15 to 18 carloads is a fairly significant output for a modeled industry and we can only aspire to match that in our operating sessions.  Various other mines operated in the Princeton area intermittently over the years of interest to us.

Thus, there were local requirements for coal cars as well as greater numbers of them to cope with the shipments from the mines of Coleman, Canmore, Natal/Michel, and Fernie.   It seems from photograph evidence that both Hopper Cars and Coal Gondolas were in abundance in the yard at Michel and so might they be in our Westward trains over the KV.  (see photos in J.F. Garden:  The Crow and the Kettle, p. 92ff and Adolf Hungry Wolf: Rails in the Canadian Rockies, p. 131.)  On the other hand, it must be admitted that photographs of trains in the transition era show Coal Gons frequently and Hopper Cars not so much.  But we have the latter on hand and a only few Coal Gons which are a little more expensive or challenging to produce.

An interesting website on the economic history of the Crowsnest can be found at: http://www.crowsnest.bc.ca/contents.html  Regarding coal and coke shipments, this site reports that "in 1922, after the closure of the smelters at Grand Forks and Greenwood only 61,497 tons of coal or 11 percent of production was made into coke."  Thus, coal dominated the carloads shipped out of the Crowsnest area.

In our comments about the various coal cars we will regularly refer to a valuable resource book for the modeler: Canadian Pacific Color Guide To Freight and Passenger Equipment by John Riddell.  Published by Morning Sun Books in 1998.  The prototype photos are invaluable for modelers.  An on-line reference is the Canadian Freight Railcar Gallery (hereinafter CFRG) at: http://freight.railfan.ca/  Direct links to on-line photos for specific cars will be given as well.  Another site of interest to Canadian modelers: http://www.nakina.net/ 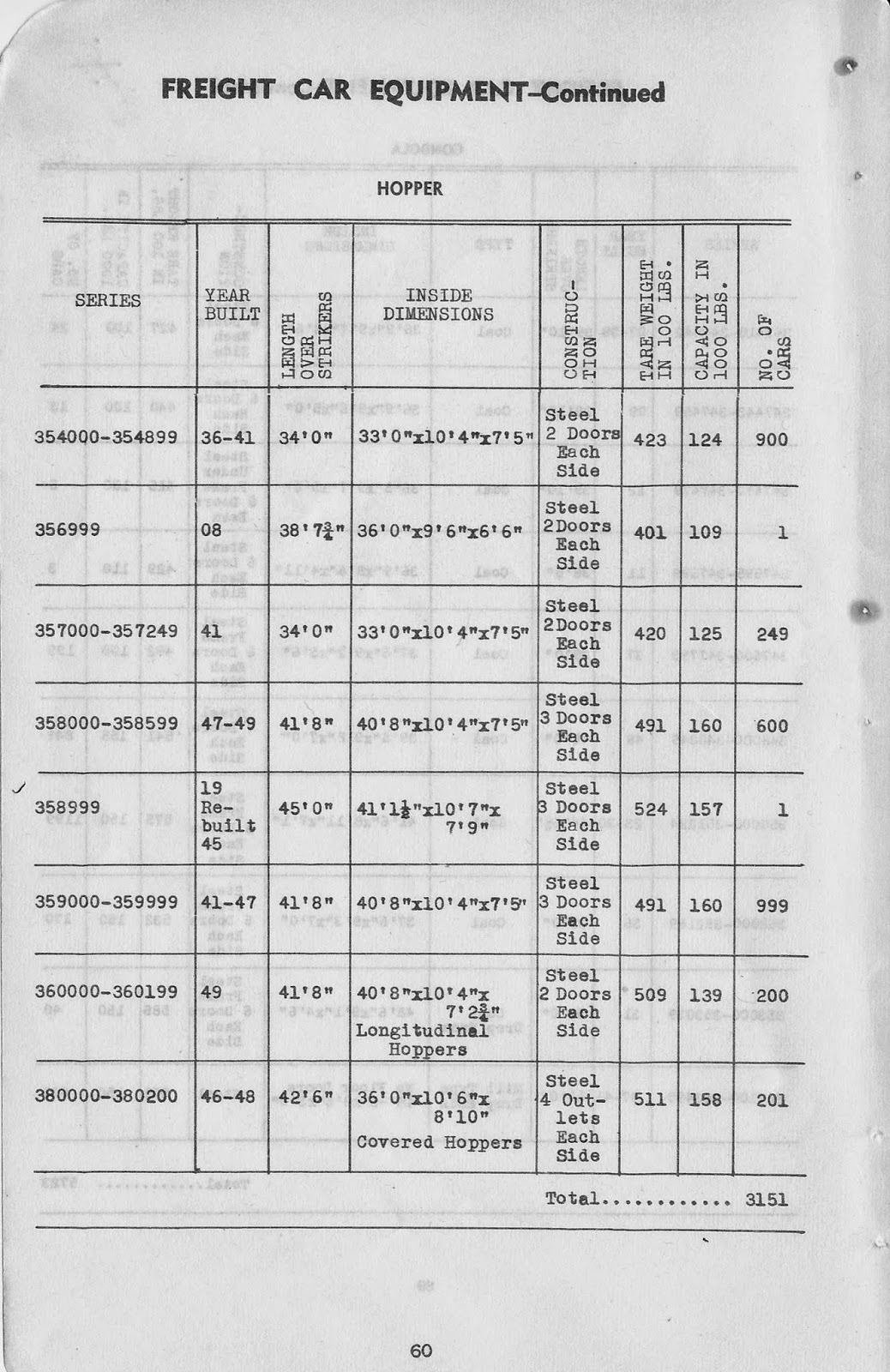 In the case of Hopper Cars, there are two major types: the Twin Hopper (HM) and the Triple Hopper (HT).  Two other hopper car types were present in much smaller quantities: the Covered Hopper (LO) and the Longitudinal Hopper (HK), the latter being mostly used On Company Service for gravel and ballast.

In the case of Longitudinal Hoppers and Covered Hoppers their numbers slowly but steadily increased over the years garnering a larger share of the roster as the Twins and Triples held steady and the Box Car numbers declined.  See the graph in the previous post.

Here is a photo of two of our Twins.  On the left is a modified Athearn car with wire grab irons, brake detail and the trainline.  The car is a good starting point.  On the right is the amazing Kadee product.  We marvel at their engineering to produce this car with fine detail.  Both are fitted with our layout's standard Accurail trucks, Intermountain semi-scale wheelsets and Kadee "scale" couplers (#158).  Both are painted Warm Black and lettered with CDS dry transfers.  see Riddell pp. 65,66. see CFRG http://freight.railfan.ca/cgi-bin/image.pl?i=cp357156&o=cprail

Both of these models are somewhat light in weight when run as empties and thus more prone to derailments.  We have added weight in several ways to improve their tracking.  In the case of the Kadee car, we have applied a weight made by Juneco Scale Models specifically for the Athearn Twin Hopper which are sometimes available at hobby shops and through web-sites.  It is triangular in shape and fits perfectly into the space between the hoppers.  The Athearn car has a simple fishing line lead weight squeezed to shape and added to the same space between hoppers.  This car has also had the slope sheet weights replaced with sheet lead cut to size and shape.  Note the brass or stainless steel screws used for truck and coupler box securement.   These and all other steel components are replaced with non-magnetic items to avoid unintended movement over magnetic uncoupling "ramps" which are employed widely on the layout.  Sometimes styrene/plastic bolsters are stripped of their thread and will not hold a machine screw tightly.  A simple but effective solution is to insert a dab of Walthers Goo or Pliobond glue into the bolster hole being careful to not get any glue on the outside to contaminate the bolster pin and truck.  The Goo holds it from loosening well enough but still allows it to be purposely unscrewed for maintenance purposes.

Here is one of our Triples, a Bowser (originally Stewart?) product that has received the detail of Tichy stirrups, wire grabs, trainline, cut levers, brake detail and removable coal load.  Weights were added between the hoppers and to the slope sheets to bring the empty car closer to NMRA recommended weighting.  The lettering is Bowser's with one digit of the number changed to represent a car of the 1940's.  Bragdon Powders for weathering.   Car kits available at Central Hobbies in Vancouver.  see Riddell pp. 66,67.  see CFRG: http://freight.railfan.ca/cgi-bin/image.pl?i=cp358910&o=cprail

Besides the M P 14 and the ORER mentioned in this and the previous post, we have in our possession a copy of the daily scale reports of the Penticton track scale for the entire year of 1961.  This "book" provides some helpful insight into the on-line origins and far-flung destinations of freight cars and their respective loads. While we are very glad to have acquired this document, we would have preferred a slightly earlier version to better dovetail with the era we model.  Another limitation of the document is that it records only those cars weighed at Penticton.  Cars originating from the Kootenays would have been weighed at Nelson or Cranbrook or perhaps at a track scale closer to the mine itself.  Cars originating west of Penticton and heading westward would be weighed elsewhere.  Yet, what it does give us is, for example, a record of 108 carloads of silica, quartz and rock shipped out of Oliver in the year 1961 to Vancouver, Washington and Portland, Oregon.  Not sure of the receivers and no record of coal movements.  The cars used were 1 Twin Hopper and 107 Triples.  No hopper cars shipped Eastward.
In summary, the following cars in 1961 were used in Westbound service:


For period modelers like myself, it becomes important to observe which cars were in service for the chosen era.  In fact, the choice of era to model can be influenced by the rolling stock we prefer to model.  Here is a small table of Hopper cars and their build dates.

A final comment on the prevalence of home road hoppers and coal gons on the Southern mainline, is that it was likely over 99% CPR in the 1940's and '50's.  I only know of one foreign hopper appearing in one of the many photos I have seen - published and unpublished.  It is a Northern Pacific hopper on a yard track in Nelson BC, in the '50's: page  251 of Riegger's, The Kettle Valley and its Railways.  The car was not carrying coal.

To be continued next week with a look at the drop-bottom Gondolas used in coal and ore service...