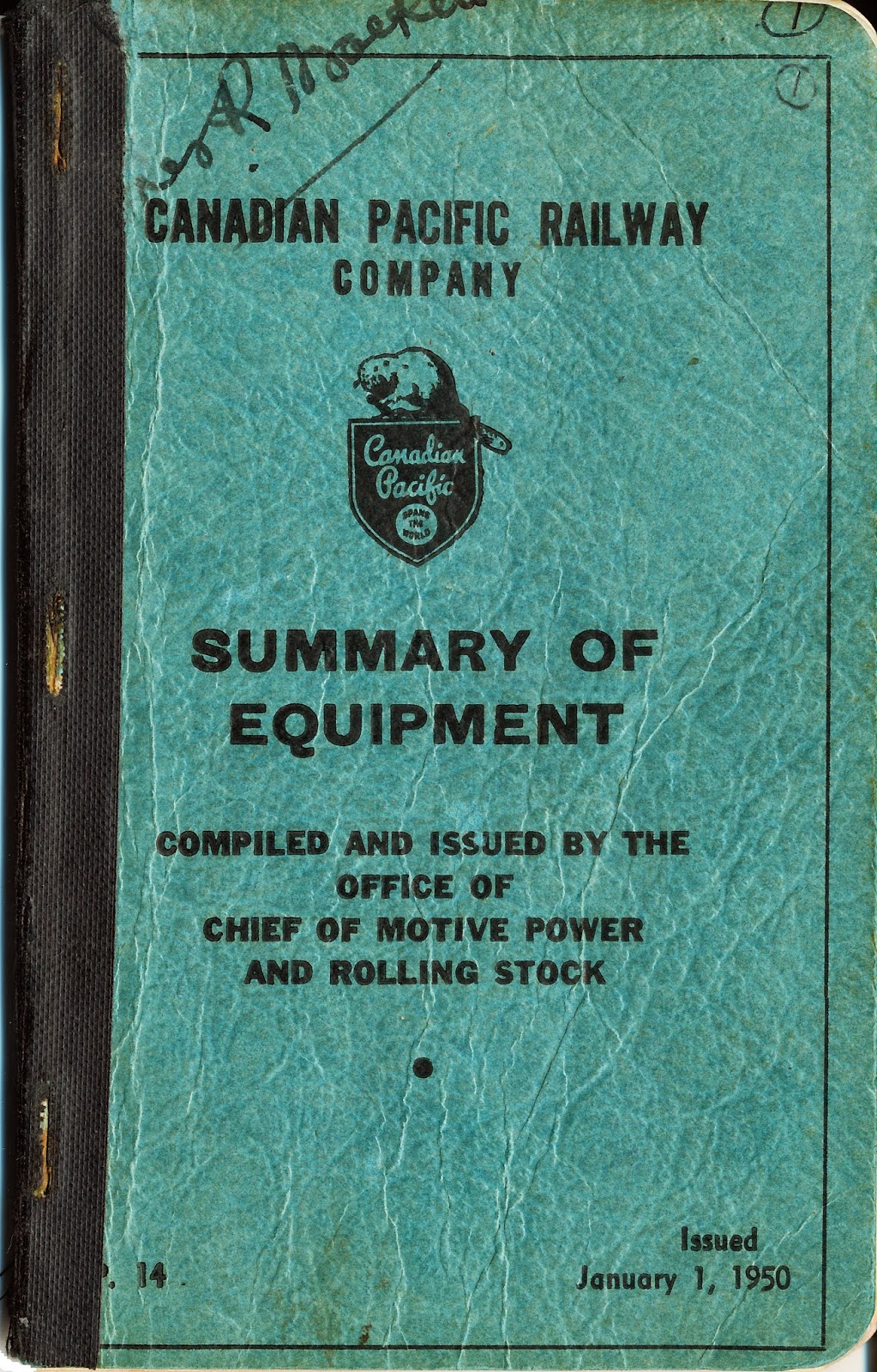 Choosing which freight cars to buy and build and in what proportion to successfully represent a particular railroad or even a particular subdivision is a problem that not a few of us prototype modelers have wrestled with for the last 20 years or so.  I first became aware of it through reading the publications of Robert Schleicher: Railmodel Journal and its predecessor, Model Railroading which contained many good articles on the subject.  And of course, it just made sense to think about it before spending the meagre funds allocated to our hobby budget.  As I became more and more focused on modeling the CPR and later the Kettle Valley, it was natural to buy and build representative car kits for the era that I was more specifically considering.  When I acquired a roster book for the CPR which listed all its equipment for my era, I hit on the idea of compiling a roster of freight cars in a strict proportion to the listings for the whole of the CPR system.  This book was called an M.P. 14 for short and its cover is reproduced here.  Photocopies of the books are available at train shows and I acquired a set covering 1938 to 1956. 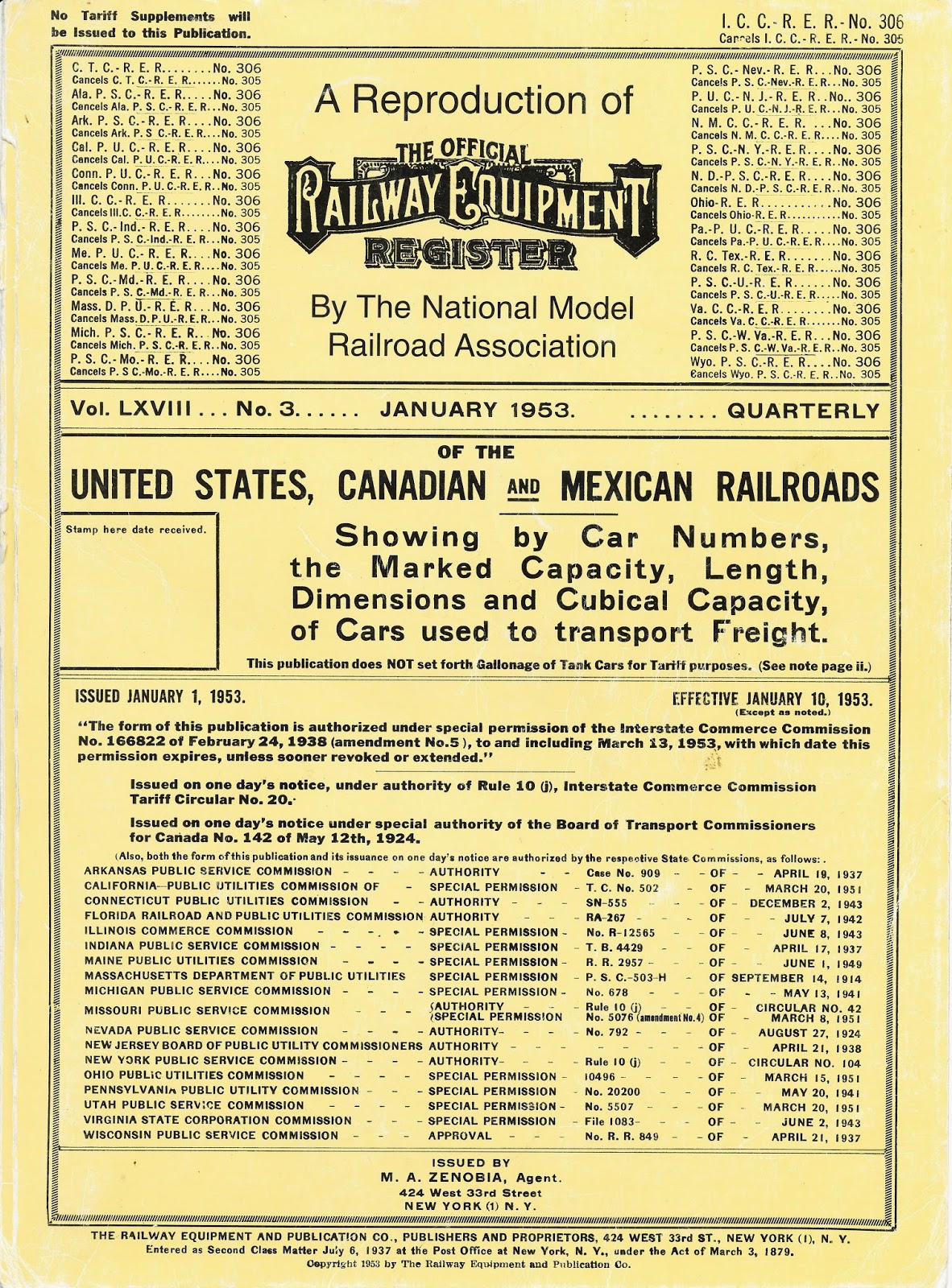 Another valuable resource for freight car rosters is The Official Railway Equipment Register (ORER).  This particular issue is a complete reproduction by the NMRA of the book published in January 1953.  It contains a comprehensive listing of all freight cars traveling in revenue service throughout North America.  In it are listed the equipment of railroads such as the 191,639 freight cars of the Pennsylvania Railroad (PRR) and that of private car owners such as the 2 tank cars owned by Canadian Breweries Limited (C.B.X.).  It has other interesting sections.  This 1953 issue has 826 pages.
One or the other book is valuable but having both is better to work from.  For example, the M.P. 14 contains build dates for each group of cars which are not to be found in the other.  Perhaps more importantly, the M.P. 14 contains a listing of all the CPR locomotives, passenger equipment and service cars that the ORER does not.  Sometimes photocopies of specific pages - such as the rosters of CPR or CNR or PGE - for various years are also available at train shows.

From these resources, I compiled a table of freight car rosters for the CPR from 1938 to 1972 which is presented here.  The highlighted row is that of my chosen era.  The percentages reflect the number of a specific class of cars out of the total fleet.  This is an interesting study in its own right - at least to a few of us fanatics.

It is strikingly apparent that box cars are dominant in the national fleet at 66% for my era and the years following.  There were proportionally even more box cars in the fleet in the years prior.  After some thought and looking at some prototype statistics and photographs, I realized that it would be better to try a different tack.  So, I looked at the car spots on the layout and placed appropriate cars on them, trying to fill them to the maximum and then removing some to come up with a sort of typical average for each spot.  The result is that in the current configuration of the layout, there are 69 car spots and on average, 45 of them are filled.  Then I assessed numbers of each car type for the average distribution of cars on the layout.

I reasoned that these cars would need doubles as they would in an average operating session be switched out and replaced with a similar car.  There was one exception to this: only one of the two log spurs would see 4 cars switched out in a session.  On the other hand, Merritt town and its industries were located off the layout in staging with on average, 9 cars traded in a session.  So in the end, I needed 94 cars with box cars comprising 31% of the total - less than half the national fleet.  Here is the sum of cars needed for on- line and off-layout industries.


Eventually, I realized that this part of the roster reflected the specifics of the British Columbia scene with its proportions matched to our resource industries.  Flat cars for logs; flats and box cars for lumber; hoppers and gondolas for coal and other minerals; stock cars for cattle; and reefers of fresh fruits and vegetables.  And then tank cars for importing the much needed oil products to grease the wheels of the provincial economy.

I reasoned on.  The total number of freight cars needed for the layout was about 164.  This included:
Subtract the 94 cars calculated above from the 164 grand total and we get 70 cars for through trains.  Weight these toward Box cars, Hoppers and "Oilcans" with a few others and we get an interesting fleet.  To date, we have a fleet that is a bit low on the box car end and heavy on foreign road cars.  But we are getting there.

The calculations outlined above are complemented by more than a few observations and comments and info I picked up from various sources: veteran railroaders over the years, photo evidence and some company documents including Penticton scale reports for the entire year of 1961 and Train Sheets for the 1950's.  The KVR was a unique railroad in many respects and quite different from US roads.  It was even different from the parent company I think due to its being primarily a resource railroad and not serving a large metropolitan city such as Vancouver.  Rather it served numerous smaller cities and towns scattered along its lengthy mainline.

For further reading may I direct your attention to a most excellent and interesting blog site, that of Tony Thompson: http://modelingthesp.blogspot.ca  where he deals with the subject in more detail but geared towards his beloved Southern Pacific.  His excellent series of posts can be accessed by typing in: choosing a freight car fleet in the search box at the top right.  Or you can start here: http://modelingthesp.blogspot.com/2010/12/choosing-model-car-fleet.html

We will continue with one or two more posts (with pictures) on the specifics of the freight car fleet as it is modeled on the Kettle Valley Model Railway.