We begin a series of articles on Trestles as used on the KVR and CPR.  We will treat of a few trestles as originally built for the KV and, in addition, some rebuilds of the 60's, but most of our posts will concern trestles of our modeling era of the 1940's and 50's.  There were significant differences in the construction of Frame Trestles in particular through the decades of the twentieth century.  On the other hand, the details of pile trestles did not change so much and these will be our focus for this post.  And again it must be stated that we write from a modeler's perspective.

Pictured here is a pile trestle of more recent vintage as it existed late in its service life.  This fine shot was taken by Dave Love who has kindly allowed us to post it.  Sadly, some local vandals burned it down shortly after the steel was lifted.  Some of the charred pilings are still standing but little else remains.  This is the bridge at Mileage 102.7 of the Princeton Sub. 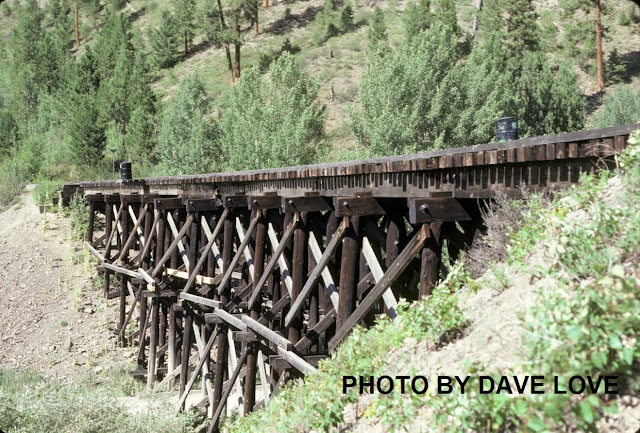 Pile Trestles take their name from the Piles or peeled logs that were driven by a pile driver into the ground until bottom was found or sufficient penetration was accomplished to satisfy the Engineers that they would not move.  These piles were 12" to 14" in diameter and of course somewhat tapered as nature designed them.  They were a high grade of log and normally peeled of all bark and then saturated with Creosote.  When all the piles of a Bent were driven, the tops were cut off in line and pins were driven into the tops of the piles.  A Cap with mating holes for the pins was placed on top of the piles and the whole bent braced.

Next is a close-up of a different pile trestle, some details of which are identified to illustrate further the drawings which follow.  The Bulkhead timbers are nailed to the pilings of the End Bent or Ballast Wall and to the stringers to contain the fill material and ballast of the track leading up to the trestle.  The timbers are 3" x 12" s stacked on top of each other in progressively longer lengths though there appears to be a fourth 3" x 12" whereas the drawing shows only three.  Stringers were set in pairs over the Bent Caps, there being three pairs in all.  Each Stringer was 30 feet long so as to span two bents.  For each pair of stringers, the joints were staggered over every second bent.  A Spacer separated the two stringers of each pair and Bolts passed through the stringers and spacer.  The Bridge Ties were nailed to the outer stringers with 14" Lining Spikes.  In addition, 3/4" Bolts were passed through some Ties, through the space between the outer pair of Stringers and through the Bent Cap.  The (Outer) Guard Rail is a 5" x 8" timber which is spiked to every Bridge Tie in an alternating pattern.  In later construction a galvanized iron flat bar became the norm. 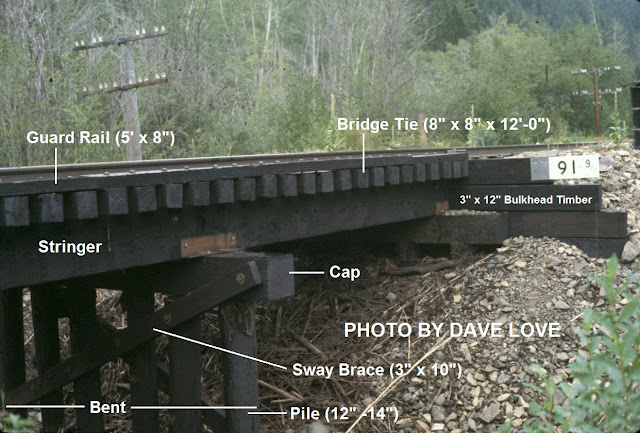 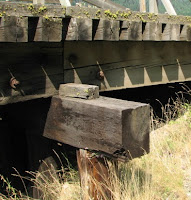 To make an important distinction, there is an Inner Guard Rail that is the extra pair of rails which run the length of the bridge.  These rails keep derailed wheels from wandering too far, hopefully preventing the cars from leaving the bridge.  The metal Connector Plate that ties the Stringers to the Bent Cap is a "modern innovation" to replace the 4" x 6" blocks of the earlier style construction.  These blocks were still in use on the Tulameen bridge shown here and in the first photo above.  The through bolts tying the stringers together are visible here.

The Mileboard Sign is attached to the end bent which is not the usual practice but this is a very short bridge - only 45 feet long.  Normally, the mileboards were placed in the centre of the bridge on the engineer's side when facing east.  The bridge timbers and the Creosote look quite new at the time this photo was taken and we speculate that his bridge was built in 1972 according to one of the notes on the grade profile drawing.  According to this drawing, it seems that before this short trestle was built, a culvert and fill was in place here from at least 1963.  But there are several erasures and notes at this location on the drawing and we cannot be definitive about our interpretation.

On the extreme right is the edge of a Water Barrel available for emergency fire protection.  Placement on the bridge approach was the practice when trestles were short.  On longer trestles, a refuge and Platform were constructed at intervals along the bridge itself as seen in the first photo above.

Here is part of a plan that we drew from original C P R drawings which dated from 1941.  It is a lighter construction and Engineering Standard than the one in the photo with one less pile per bent.  The more piles the higher the rating of the Bridge in terms of load bearing.  This was the standard of the day.  One other item to point out is that pile trestles of the 1950's and later, for the most part had their outside piles "Battered" i e, sloped outwards whereas the 1941 drawing specifies that the piles were only battered on trestles over 20 feet in height.  Both trestles pictured above have this feature. 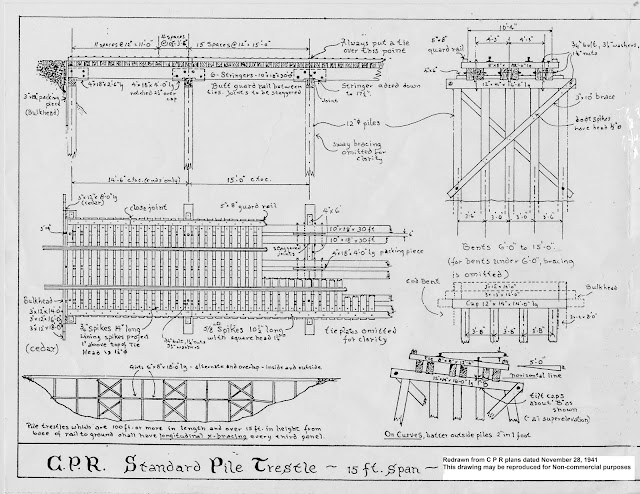 Here is the other part of the plan, showing the bent construction. 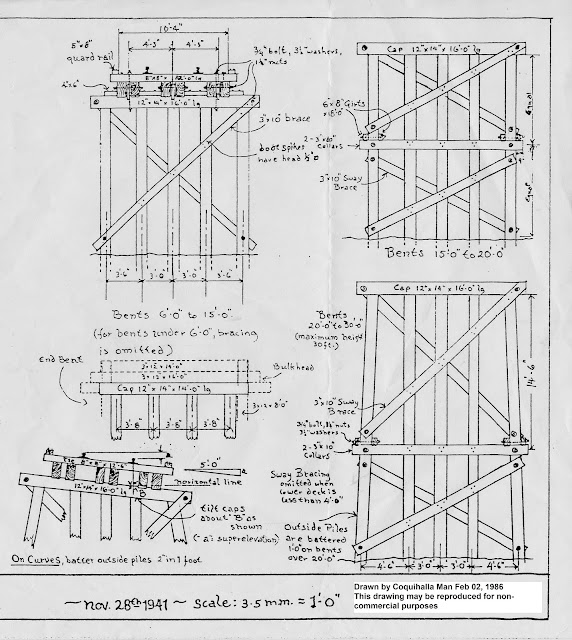 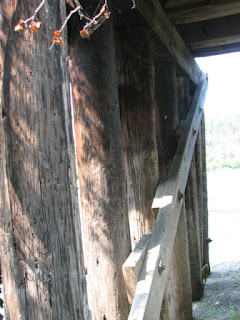 When driving piles, they do not necessarily go in absolutely straight and plumb.  Sometimes adjustment must be made for this and for the piles being somewhat thinner or thicker in diameter at the top where the cap is placed.  These irregularities are accommodated by shims and notches as shown here in detail shots of the Tulameen trestle. 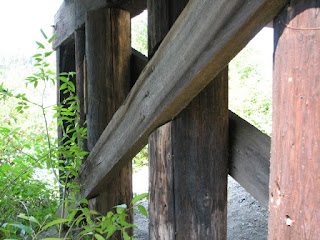 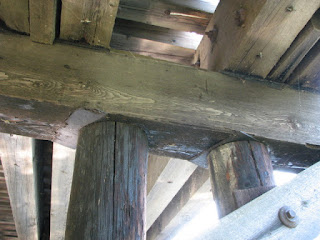 These two photos show the Sway Braces that most bents possess.  They always run diagonally from the 2 o'clock position to the 8 o'clock position on each face.  They are cut from 3" x 10" planks and are through-bolted at least at the ends and often on each pile.  Or the sway braces are simply nailed to the intermediate piles.

And sometimes the Bridgemen do not cut the pile tops accurately enough so that shims must be placed between the top of the piles and the caps.

Next post will deal with an interesting example of a Kettle Valley Pile Trestle.