JULIET STATION (with some Explanations)


Juliet was a Station on the Kettle Valley Railway at Mileage 9.8 of the Coquihalla Subdivision.
This post contains more than a little technical data on this area.   We also offer some explanations of the engineering nomenclature as applied to the station Ground Plan of Juliet which is a typical station on the KVR.  We have some valuable information on Juliet but nothing of note in the way of photographs.  Several images have been published in books and pamphlets and we will note them below.  We do have some interesting official CPR drawings of the station ground plan and a grade profile which should be of some interest.  We will take this opportunity to explain some of the symbols on the drawings for the benefit of readers who do not have experience or training in interpreting engineering and building plans.  The author has some knowledge of this after a career in spent in building construction and one student summer as part of a survey crew with the BC Department of Highways - a long time ago so memory is not 100%!

To begin with here is the full Station Ground Plan which shows the overall track alignment and location of the buildings.  The track alignment is roughly north-south although in railroad parlance, it is east-west.  The "Rule" at the bottom is imported from the margin of the original and is scaled at one unit equals 100 feet.  The original plan was drawn at 1":100'.  The plan was reduced when the original was scanned/photocopied and placed on microfiche.  We were fortunate to obtain direct copies from the microfiche. The original drawing was made in May of 1934 and updated in June 1953.  The update seems to be simply the addition of a private road crossing for Sovereign Construction & Engineering Limited.

Examining the plan more closely in the following crop we will explain the terms and numbers.  To begin with we must make it clear that CPR engineering drawings follow the convention of "reading" from east to west.  This is similar to mileages which are often referenced to an eastern division point or terminus.  The mileposts and measurements on this particular drawing are referenced to the eastern division point of Brookmere which we have treated at some length in previous posts beginning here: http://kettlevalleymodelrailway.blogspot.ca/2014/12/brookmere-early-railway-years.html.  Thus, distances are calculated from right to left on the drawing with the railroad east to the right.  North to South lines seem to be referenced to their  respective Northern division point as is the case with the Osoyoos and Copper Mountain Subs. 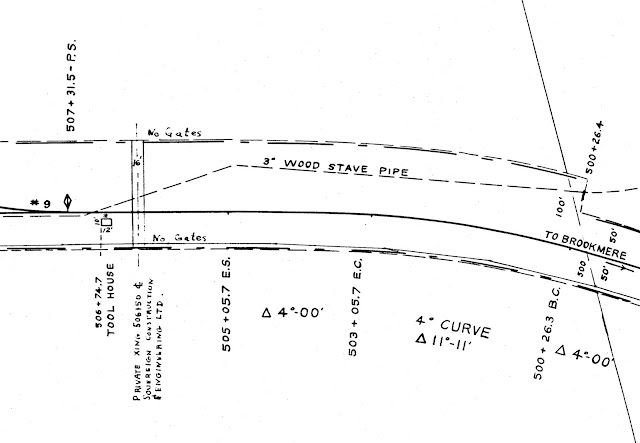 The "Delta"  ⃤   sign tells us how much the curve rotates in degrees - not to be confused with the "degree of curvature".  Modelers use the term "radius" whereas the prototype uses the term "degree of curvature".  In this case, the 4ᐤ curve turns through an arc of 11⁰ 11". To illustrate with some examples to make this clearer: an exact semi-circle of track would turn 180 degrees or   ⃤  = 180⁰; a quarter circle of track would turn through 90 degrees or   ⃤  = 90ᐤ.
In the case of the eastern approach to Juliet described above, the total arc of the track turns through 4ᐤ + 11⁰ 11" + 4ᐤ  = 19⁰ 11".
The total length of the arc is 200' + 279.4' + 200' = 679.4'.
How is this length determined form the drawing?
Look at the number 500+26.3 B.C. which is on the right and somewhat vertical.  Look at the next vertical number 503+05.7 E.C.  Subtract the first from the last (ignore the + signs) and you get a difference of 279.4 according to my calculator.  That is the length in feet of the curve proper.  Again look at the next vertical number 505+05.7 and you can see that the difference between it and the number to the right is 200 feet which is the length of the spiral.  This may well be a standard length of a spiral easement for a 4 degree curve on the Kettle.

Next is the figure 506+74.7 over "Tool House".  Look above the track centreline and see the figure 507+ 31.5 P.S.  Subtract the former from the latter for a difference of 56.8 feet and you get the distance from the tool house to the point of the switch for the passing track.  The switch stand is located there and is denoted as a diamond   ⃟   with the letters P.S. (point of switch).  The nearby symbol #9 refers to the number or size of the switch with reference to the angle of the frog.  Number 9 switches were fairly standard on the KVR but in the late 1950's, some major passing tracks were receiving an upgrade to Number 11 switches.

The simple dashed line --- --- ---  represents the wood stave pipe that supplies water to the Water Tank and to the Section House the latter probably a simple outdoors old-fashioned pump or perhaps they had the luxury of an indoor water pump.  But often in those days, there was no interior plumbing.  The water source was north of the station, perhaps from Murray Lake.  See Smuin.
The complex dashed lines ---- - ---- - ---- above and below the centreline indicate the borders of the right-of-way owned by the Railway.  In places they are 50 feet from the track and in other places they are 100 feet from the track.

To aid the modeler we reproduce part of the drawing showing the key structures of the station with essential footprint dimensions for the modeler: Tool House, Bunk House (for the section men), Section House (for the foreman & family), Water Tank and Telephone pole line. 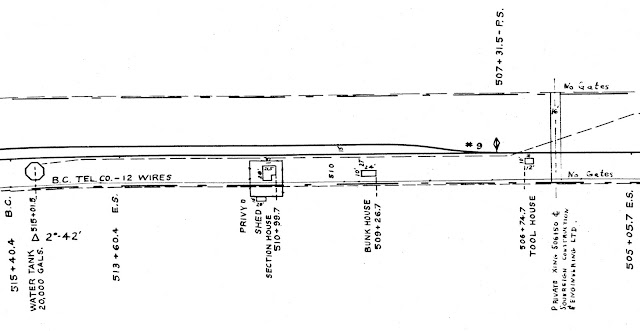 In the centre is the Section House with dimensions 21.5' at the front and probably 26' front to back.  The latter dimension is indecipherable but seems to be 26 feet.  This standard number 3 section house was originally 21'-6" x 17'-6"!  At some point an addition (8 feet long?) was made to the rear of the house as was common for the section houses throughout the Kettle Valley Railway.  It was a vast improvement over the original six room two-storey box and usually housed a kitchen.  Again, in common with most section houses throughout the system, in 1950 or so the house was probably clad in insulbrick siding to keep the family warmer in the winter.  The drawing indicates that the house was surrounded by a fence presumably to keep the deer from ravaging the garden.  There was a shed at the back of the property and a privy - well away from the living quarters!  The reader can calculate relative distances between the buildings at Juliet using the numbers on the plan.  In a future post we will present information on the Section Houses of the KVR of which there were many Standard No. 3's.   A grainy photo we have shows an exterior staircase to the second floor.  This suggests that snowfall was considerable in the winter.

Here is the west end detail.  The telephone poles carry 5 CPR Tel wires and 12 BC Tel Co. wires.  The line is just inside the dashed line of the right-of-way at the bottom.  The location of poles is indicated by small dots along the line.  There is a derail at 425+62.4 and a triangle symbol ◄ on the passing track to represent it's position which is 175.1 feet from the point of the west switch.  Milepost 10 is shown as a pointed stake.  The figure "15" between the track lines on the drawing  (near the derail symbol) tells us that the track centrelines were 15 feet apart.

Here is a small portion of another drawing for Juliet called the Grade Profile.  It has a plan view in the upper portion and the sloped line is the elevation or side view of the track grade.  Note the layout of the buildings and other items that correspond with those on the previous Station Ground Plan but the main track is drawn as a straight line which is the customary practice.  The grade varies to a maximum of +1%.  Missing from this scan of the Track Profile is the bottom line which shows the various curves and spirals.  They are missing because of size constraints of our scanner.  The 100 foot Through Plate Girder Bridge over July (Juliet) Creek is shown in plan and elevation. 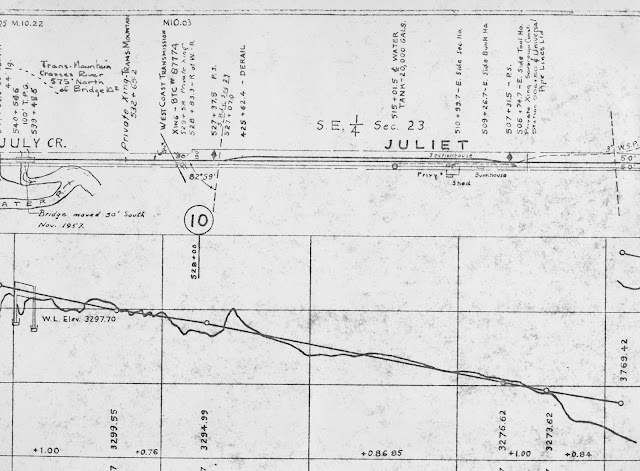 Photos: Barrie Sanford's book, Steel Rails and Iron Men contains a nice photo on page 72 which includes most of the buildings at Juliet although the Tank is out of sight.  Joe Smuin's KVR Mileboards has a smaller version of the same photo on page 3-12 along with some other facts about the station.  Two other photos of Juliet appear in Hal Riegger's book The Kettle Valley and its Railways on page 220.  The upper photo shows Train No. 12, Engine 5211 traveling over the west switch of Juliet with some background scenery.  The lower photo shows No. 11 waiting in the siding for the meet.  Wm. O. Gibson took the photos in September 1952, the last full season of steam on the Kettle.  He was positioned on the passing track side.  Here is the relevant Timetable showing the meet was scheduled for Romeo at 12.05, so No. 12 was probably running late and the Dispatcher would have fixed the meet at Juliet with a Train Order so as not to delay No. 11.

Joe Smuin's  KVR Mileboards on page 3-12 provides a nice drawing of the right-of-way with respect to the current Coquihalla Highway.

Industries: there were two spurs into a gravel pit about a mile north of Juliet which was in use up into diesel days as we recall from viewing a film of the operation.  There were HK class Ballast Hoppers on one track and a crane with clamshell bucket loading the cars (on the other track?).  Unfortunately, memory is a bit fuzzy but all we have for this detail.  There seems to be some evidence of the gravel pit along the old right-of-way which is now called Juliet Drive.
In addition, Joe Smuin reports in his Milebaords book that there was a logging spur (or spurs) off the passing track at Juliet at some point in its history.  Logging activity still continues in the area to this day. 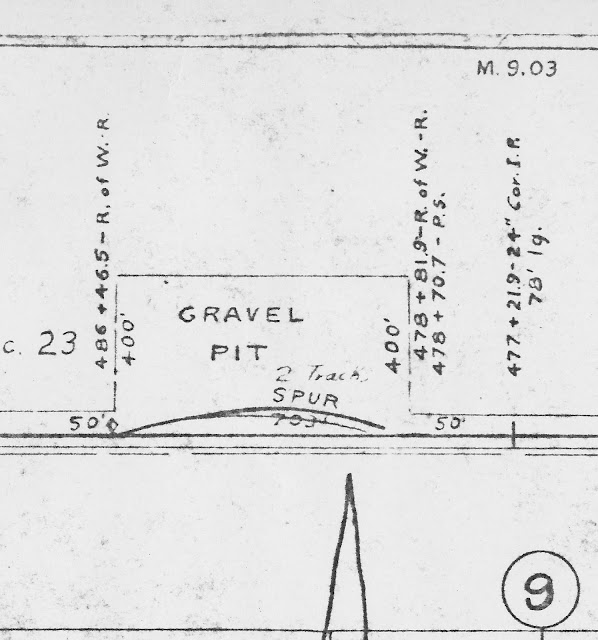 Well, that is a lot of information - probably more than anyone needs - but due to readers' responses, there is more to come on the stations of the Coquihalla!  1900 words - whew!
Coquihalla Man
Posted by Coquihalla Man at 15:53