We continue our study of the One Hundred Foot Through Plate Girder Span that is still in place at the former Kettle Valley Station of Brodie.  In the last post we looked at the standard plans for this type of bridge when built new and on tangent track.  We will examine the specifics of the very similar Brodie bridge which was built to replace an existing wooden Howe Truss Span and was located on a 12 degree curve.  In HO, that is a curve of about 65 1/2" radius and in N scale it would amount to 36".  We hope that this post will be a help to modelers trying to erect their miniature versions of these interesting engineering marvels of the early 20th century.

A photo of the underside of Brodie bridge provides a perspective on how the various members were fitted together. 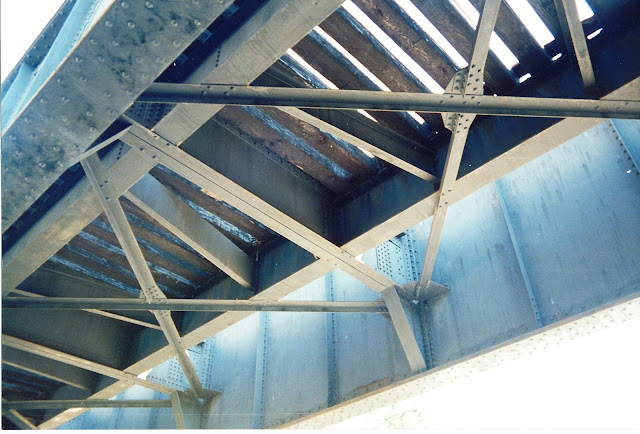 And herewith is seen the aforementioned divergence from the
standard plan, namely; the floor beams sit on triangular corbels the

effect of which is to lift the bridge deck higher with respect to the main girders than the standard plan shows.  Normally, the floor beams would intersect the main girders at their bottom flange instead of sitting on the triangular corbels.  Looking at the end/section views reproduced here and comparing them to the photo one can see that the top-mounted triangular gussets connecting the main girders to the floor beams are missing from the Brodie bridge being replaced by these underside triangular corbels. The standard plan would give a dimension 6'-0" from the top of the ties to the top of the main girder. At Brodie that dimension is 2'-10" according to our field measurement.  Thus the height of the corbel would be the difference: 3'-2".

Two other items to note in this and a second photograph are: 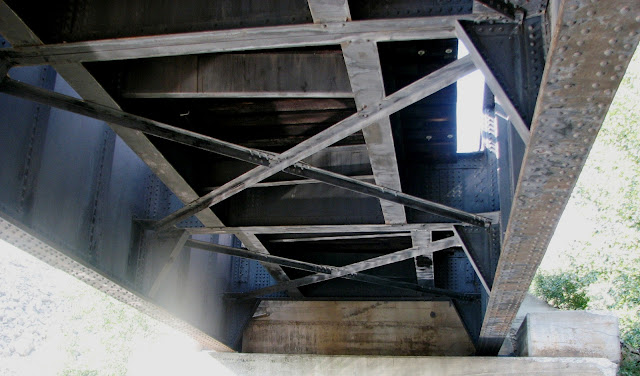 These two features are also seen in the plan view below taken from the drawing published in the previous post on Brodie junction.  Note also how the centreline of the curved track is located on the bridge and how it intersects the straight centreline of the bridge.

To summarize the differences between the CPR standard plan and the Brodie plan (and to suggest an explanation), they are:
We will briefly note some details. 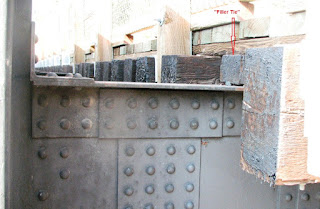 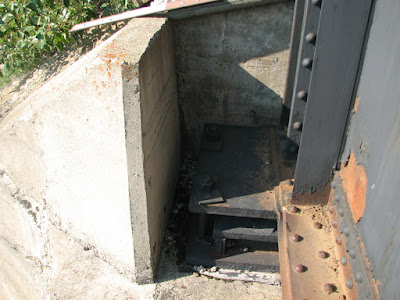 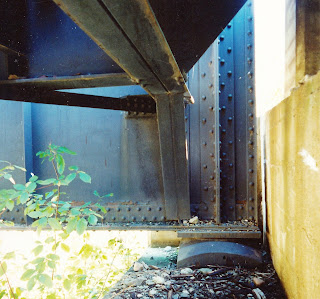 In the previous post on Brodie, we erred in the date of the issue where a drawing that Patrick Lawson had made of this standard bridge was published in the Mainline Modeler magazine.  A correction has been made there and we repeat here that the issue is that of October 2003.

One final thing to note is that there is a noticeable tilt when viewing the bridge and abutments from several angles.  It would make sense that curve elevation would be designed into the Brodie loop at least since the abandonment of the Coquihalla subdivision and possibly before that.

The net effect of the research and organization of the material in this presentation is that Coquihalla Man cannot long postpone the building of a miniature version of this important bridge for the benefit of the trains and crews that work the Kettle Valley Model Railway.  Sigh...