Today we consider part of the operating procedures for Brookmere yard as it was worked in later steam days.  This is what we try to replicate in our operating sessions every month or two and we are pleased to report that a good time is usually had by all.  The description that follows is in part information for the crews who attend our sessions on Saturday afternoons - especially those new to the layout.  Today we will examine the movements for a freight train arriving at Brookmere from Penticton.  We are guided in this by information supplied by several KV veterans over the years, gleaned in particular from the conversations surrounding the display of the layout at the annual reunions about which we have written in the previous post.

Our photograph shows a train headed by Engine 3639, arriving in Brookmere with 7 cars in tow - a shorter train than normal for brevity and clarity in our illustration.  It is Fourth Class train No. 93 with its schedule highlighted in our Timetable reproduced below. 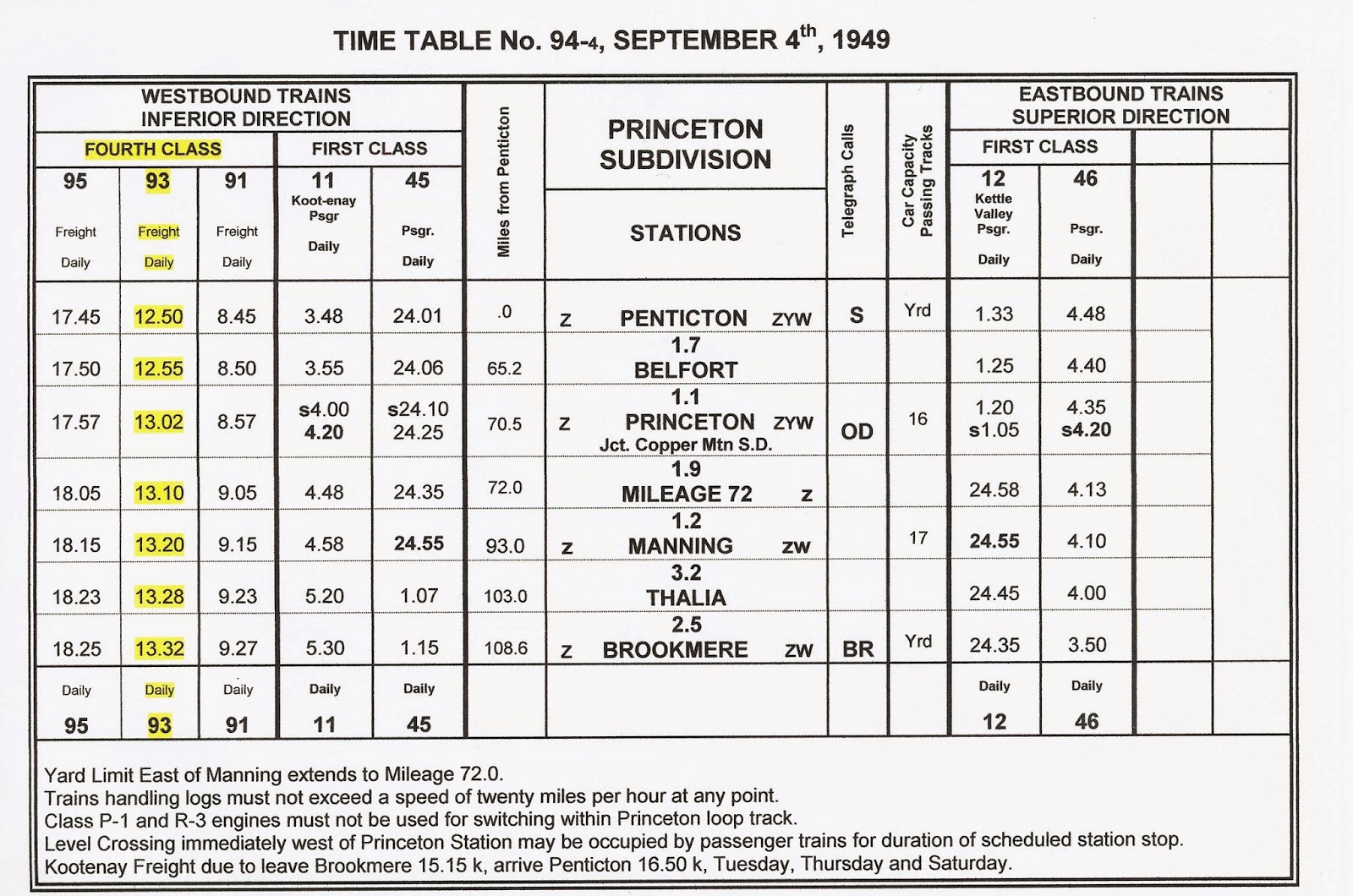 In prototype terms she has 3 loads and 4 empties - the caboose always figuring in the car count as an empty.  This car count would have been supplied to the Dispatcher by the Conductor through the Penticton Operator which is the Initial Station for this train.  She is taking the main track, arriving at Brookmere in the early afternoon. As a scheduled fourth class train, even though she has right, she approaches at Yard Speed in anticipation that the main track may be occupied by another train or engine.  These latter are permitted to occupy the main without protection within Yard Limits (see Rule 93).  By the way, YARD SPEED is defined as "A speed that will permit stopping within one-half the range of vision."

In the case of our No. 93, the crew needs to know what to do with the cars in our train because the cars are going somewhere.  In order for these cars to be expedited to their intended destinations, they will be set out on the appropriate tracks in Brookmere yard. Those intended destinations are stipulated in the Waybills that accompany every freight car on a railroad.  For the model layout, we use a set of Waybills that is fairly standard for operating layouts.  They are accompanied by "car cards" that are somewhat of a substitute for a switch list.  We are considering developing a more prototypical looking set of Waybills and even a Switch List.  See Thompson's many posts one of which is here: http://modelingthesp.blogspot.ca/2014/09/waybills-part-34-one-piece-waybill.html

Here is the set of (model) Waybills (attached to Car Cards) for the train under consideration.  On the top right is the Locomotive Card with a brief description of its work and how to do it written on a Train Card.  In this case the back page of the Train Card specifies that No. 93 arrives in Brookmere on the main track and will spot its caboose on the [Princeton Sub] Caboose Track East and then yard the rest of the train.  On the top left is the Car Card and Waybill for a Pacific Fruit Express Refrigerator Car, PFE No. 62265.  The colour of the heading and text reflects the actual colour of the model car and its lettering, in this case an Orange car with black lettering. This feature is very handy for setting up consists before operating sessions and finding particular cars.  It is also meant to help our train crews. 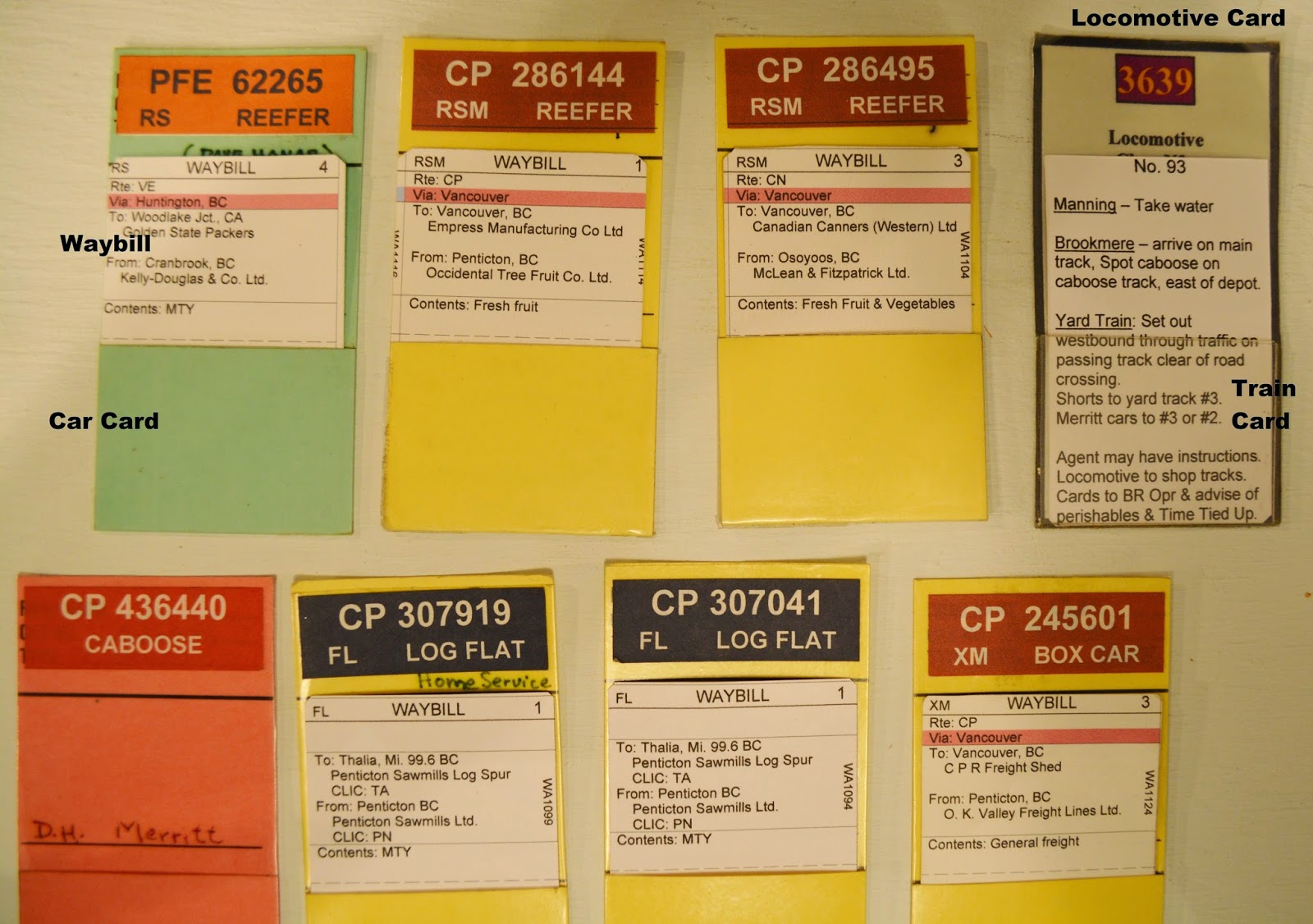 The red stripe and text on the waybill states that the car is headed for California via the interchange at Huntington BC.  It is an empty (MTY).  In the pressure of the operating session, the red stripe is a quick and convenient way to establish where a car must be spotted in the yard.  In this case it is going to the Westbound through freight track along with 3 other cars (which also have red stripes on the waybills).  Two empty log flats have no stripe which means that they are "shorts" bound for a local shipper/receiver on the modeled part of the layout.  In this case they are destined for the log spur at Thalia.  On the prototype, the conductor would have a complete set of waybills in his caboose.  From the waybills, the conductor or a yard clerk in his originating terminal would make up a Switch List or Train List with every car entered on it with a few details about lading, consignee, shipper, weight and possibly special handling instructions.

This is the yard plan for Brookmere with the names of the tracks labeled.  This view conforms to the physical orientation of the layout with the roundhouse immediately in front of the viewer and East being to the left.  We have chosen to retain the currently modeled numbering of the yard tracks.  Our westward train, No. 93 is arriving on the main track from the left.

According to the KV men, the movements would be as follows (summarized on the Train Card):
Here is the sequence in photos. 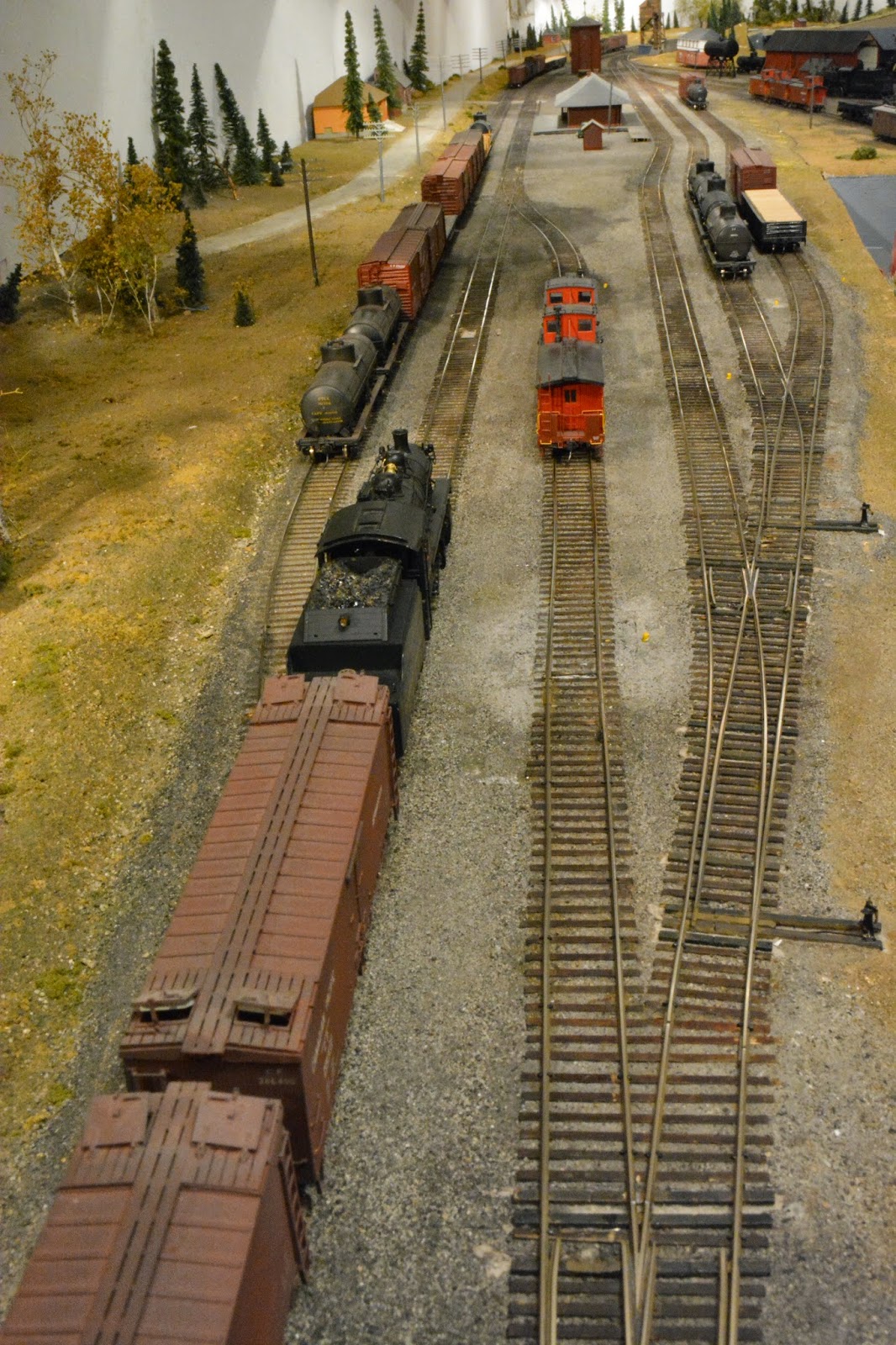 No. 93 is occupying the main track and approaching the station.  Bell will start to ring as it gets closer continuing in all the back and forth movements needed to set out the caboose on the nearby Princeton Caboose track.  Once clear of the station the bell ringing can cease (Rule 30).

Cars on the left were set out by an earlier train from Penticton.  They will eventually be combined with our cars for a trip down the Coquihalla to Ruby Creek.  There a mainline crew will take the cars to Port Coquitlam and other points west.

On the right are some tank cars on Yard track #2 awaiting an Eastbound through freight.  Cars on Yard track #3 are "shorts" which will be delivered to various on-line customers to be served by the appropriate wayfreights for the Princeton Sub, Coquihalla sub, and Merritt sub.

All in all, today there are quite a few cars headed west but not too many for the east.


Setting out the caboose.  Note the yellow pin which is not to be found on the prototype.  This pin marks the centre of an uncoupling magnet.  No "picking" necessary. 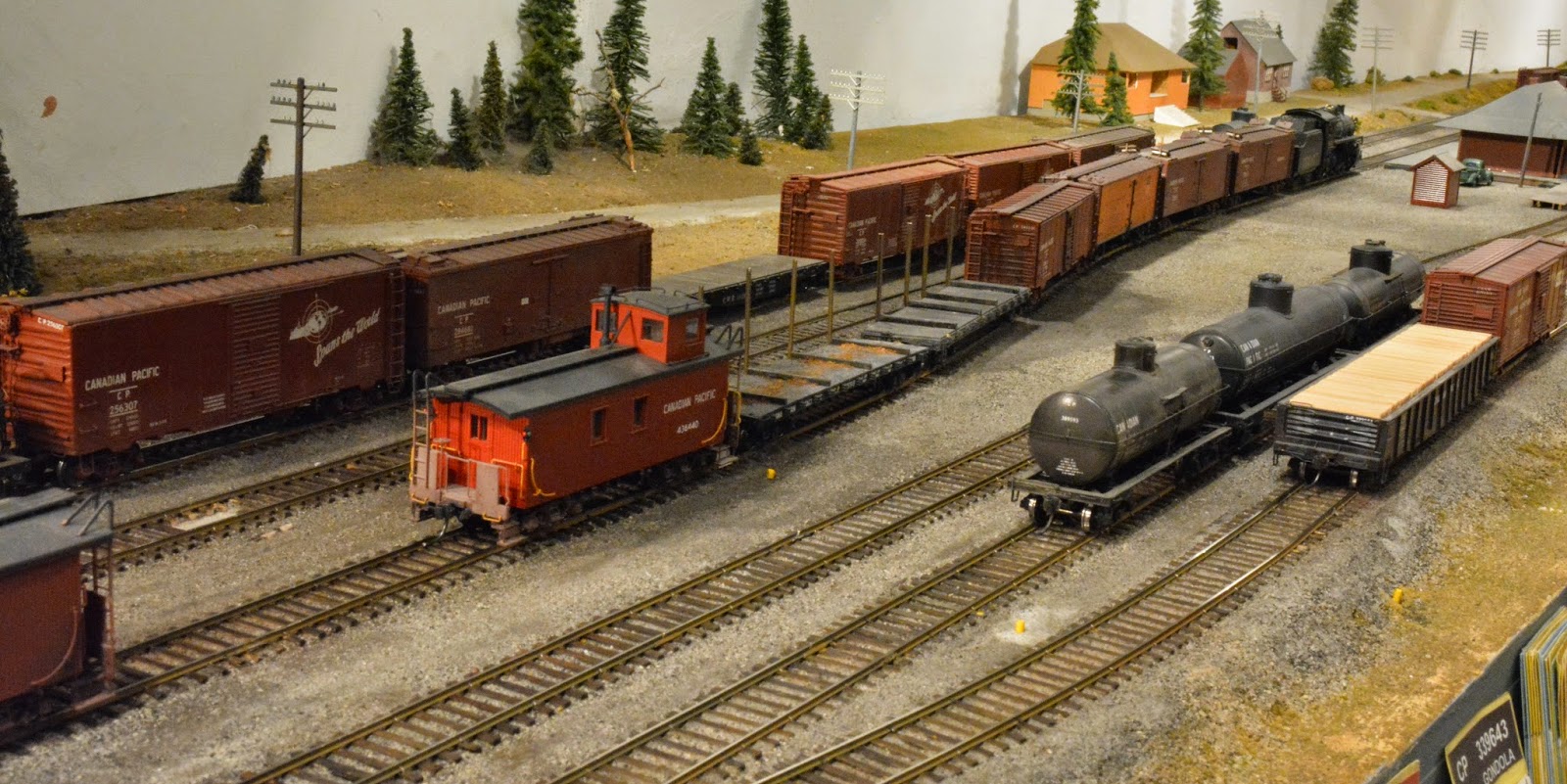 Real life Conductor "Kettle Valley Gus," who appeared in the last post, advised that the real life operation of setting out the caboose would not involve a backing movement of the train.  Rather, the conductor would pull the pin "on the fly" thereby uncoupling his car from the rest of the train as they approached the station and employing the handbrake to arrest their movement clear of the switch points.  The brakeman would detrain and throw the caboose track switch, after which, the conductor would release the handbrake allowing the caboose to roll on its own into the caboose track where it would be brought to a stop again with the handbrake.  There was a good enough grade east of the station for a car to roll away on its own.  (see grade profile here http://kettlevalleymodelrailway.blogspot.ca/2014/12/brookmere-early-railway-years.html)

No. 93 continues on the main track to the west end of the yard where it will stop to cut off the last two cars of the consist which are destined for the "shorts" track in the yard proper.  The other four westbound cars are now taken forward over the road crossing, bell once again ringing and a 14L being sounded on the engine's whistle (rule 14 L).

The four car cut is  backed into the "passing siding" which is not used at all for passing.  The cut is coupled up to any standing cars already there and brakes applied.  Derail is reset.  There are no model brakes and no model derail installed yet but perhaps one day the latter. 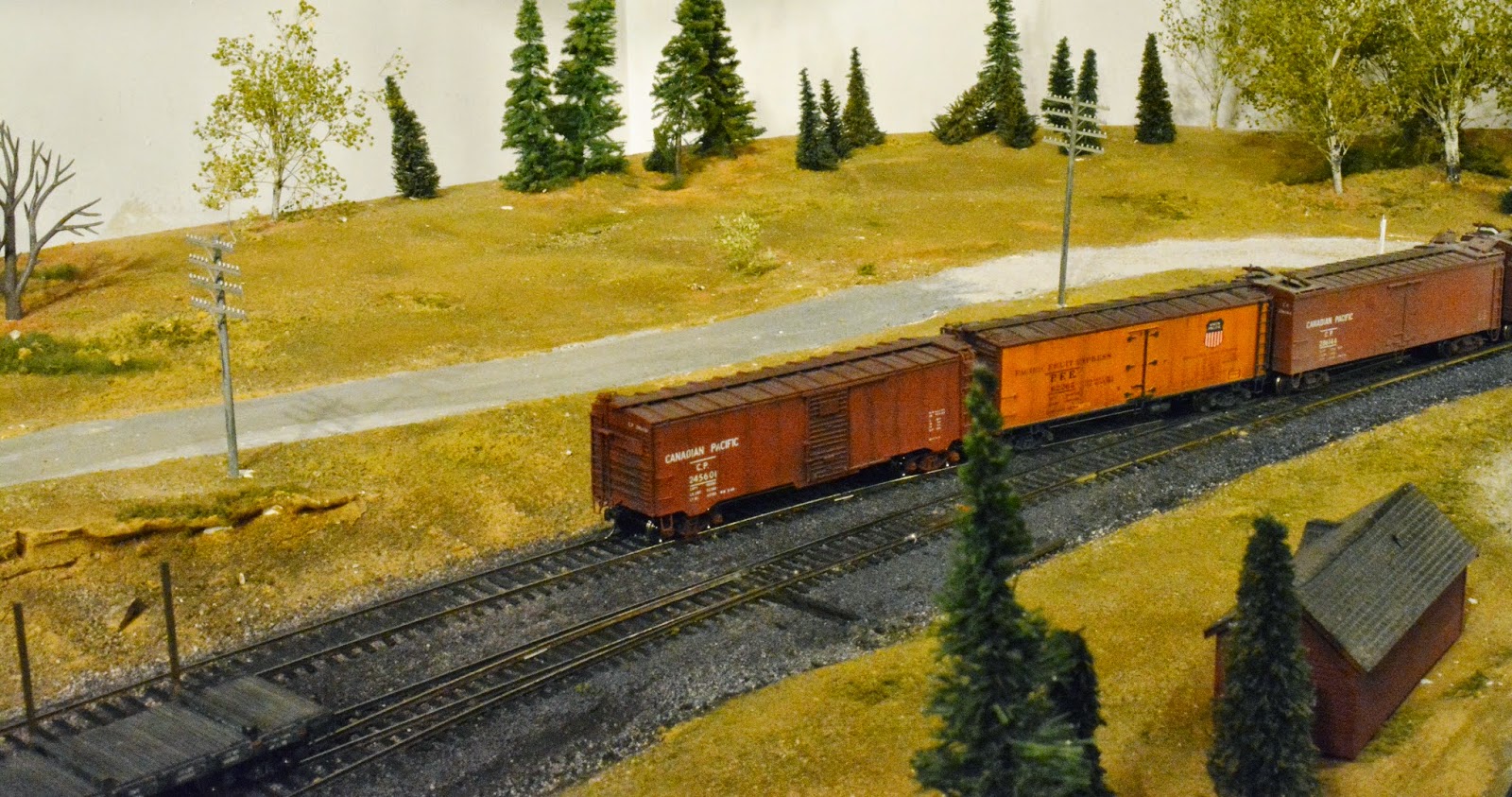 Engine 3639 cuts off the westbound cars and couples back on to the log flats destined for Thalia.  They are pushed back onto the Yard lead and will be set out onto the Yard Track #3.  Now clear of the road crossing, the bell ringing is finished.

Spotting the log flats on Yard Track #3, coupling them onto the other two cars already there.  The pin for the uncoupling magnet is just visible.  As to the use of the yard tracks on the prototype, it seems that cars were actually set out on any track available.  We have had to adopt a standard practice of assigning cars to tracks 2 and 3 due to the "busyness" of the model yard in an operating session.  Realize that we do in four hours what the prototype did in 24.

Having completed our work, Engine 3639 is parked on the shop track.  This is somewhat preferable to parking in the roundhouse where repairs and servicing were carried out.  The near shop track was normally left vacant for access to the turntable and the cinder-pit seen in the foreground.  On the layout, we have installed an electrical "isolator track and switch" allowing the newly arrived engine a respite from any electricity flowing through its veins.  This mutes the engine's decoder, thereby extending its life.  This view also illustrates that normally, a break was left in the parked railcars both in front and behind the station to permit access by the employees and public. 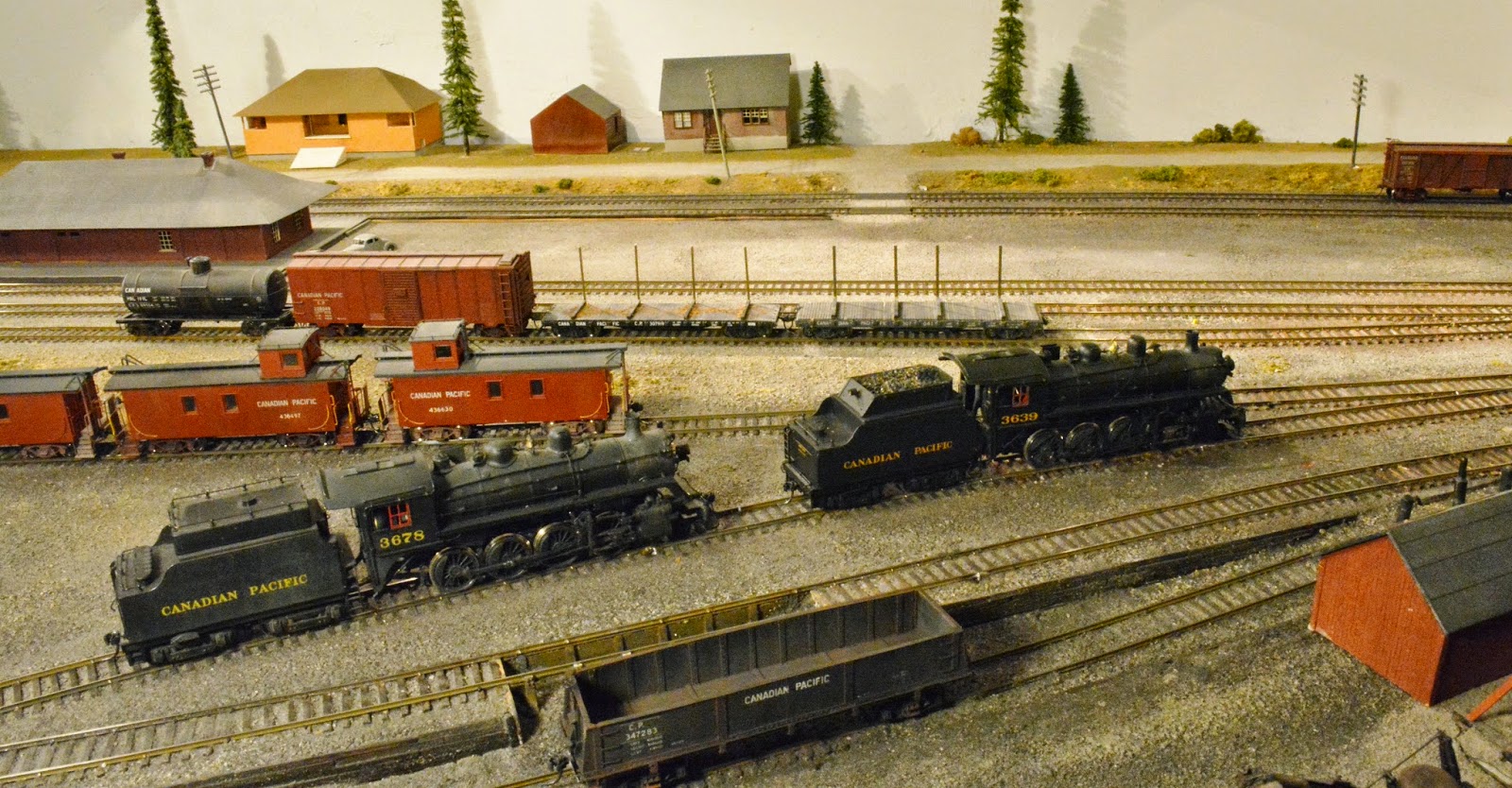 Now to book off, returning the Car Cards and Waybills to the Agent and advising him of the 2 cars laden with perishables that we have just set out.  Ready for another assignment?