Kettle Valley railroaders and their families held an annual get-together for many years on the second weekend of August - usually in Brookmere.  I was happy to attend most of them beginning in the late 80's but I felt like an intruder at first being a "model" railroader.  Many professionals do not have much time for rail-fans and modelers who try to show they know a lot about railroading or have too many questions.  One has to hang around without being annoying.  After a while I was tolerated and some of my questions did seem to elicit a considered response.  Eventually, I started to bring along models that I had worked up as accurate reproductions of the structures and equipment these men had worked with.  Comments and corrections were offered by them and they saw that I was sincere in my quest for historical and mechanical accuracy and perhaps they saw that here was an opportunity for the preservation of their little corner of history.  They were an interesting bunch that one of their number by the name of Alan Palm, eulogized in his poetry:


Yet back through the haze I remember with awe
We were the best damn railroaders this world ever saw.

I was very fortunate to meet and talk with trainman Alan Palm at the one Brookmere meet he attended as for most summers he had other family commitments.  He was the perfect resource for a modeler with a great love of his job as a railroader on the Kettle Valley and a keen mind for detail which he was glad to share.  I pumped him for all I could get.  He wrote an interesting monograph of his days on the KV  that used to be available through the Penticton Museum.  I have read it many times.  It is well worth acquiring if still in print. 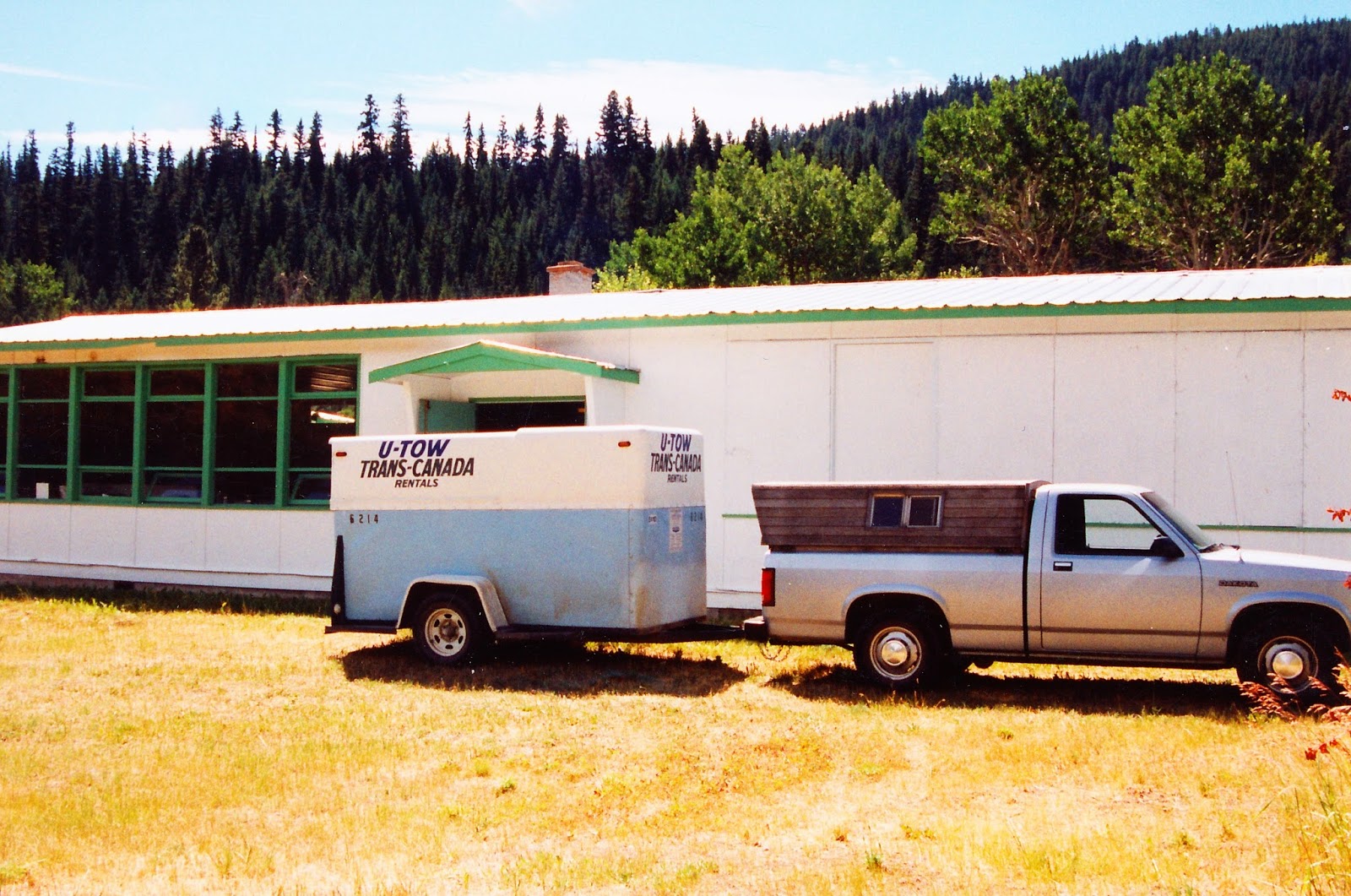 As progress on my home layout developed to the point of being presentable, I hit on the idea of taking the entire model of Brookmere rail-yard all the way to Brookmere itself.  I believe this was 1990.  With the help of my friend Colin, the layout was transported in a trailer and was set up in the old school which had become the village meeting place.  Here is the trailer in front of the school as we reloaded the display for our return home.  My version of Brookmere (and most of the rest of the layout) has been built in demountable sections of  6 to 9 feet long.  For this trip, only 3 of the 4 sections were ready.
It took a lot of time to set up but the effort and cost of the trailer rental was well worth the investment as it turned out.  The response was all I could hope for with many people coming for a look and staying for extended discussion (and not a few friendly arguments).  I had a small tape machine going and managed to get some of the conversations recorded.  The following year, I took all 4 sections up and got the same response and the information that was flowing.  Unfortunately, nowhere near enough was recorded or noted in writing.

A few photos taken by my friend Colin, of the first display are here presented.  As you can see, the interest of those gathered is tangible.  But the lighting was not at all flattering for the layout.

An overview of the layout which is only 3/4 present, the western end remaining at home.  Many structures are not represented or are unfinished.   The layout was operational although the visitors were not all that interested, preferring to talk about this or that adventure.  In the narration would come out a detail that I could ask further about. 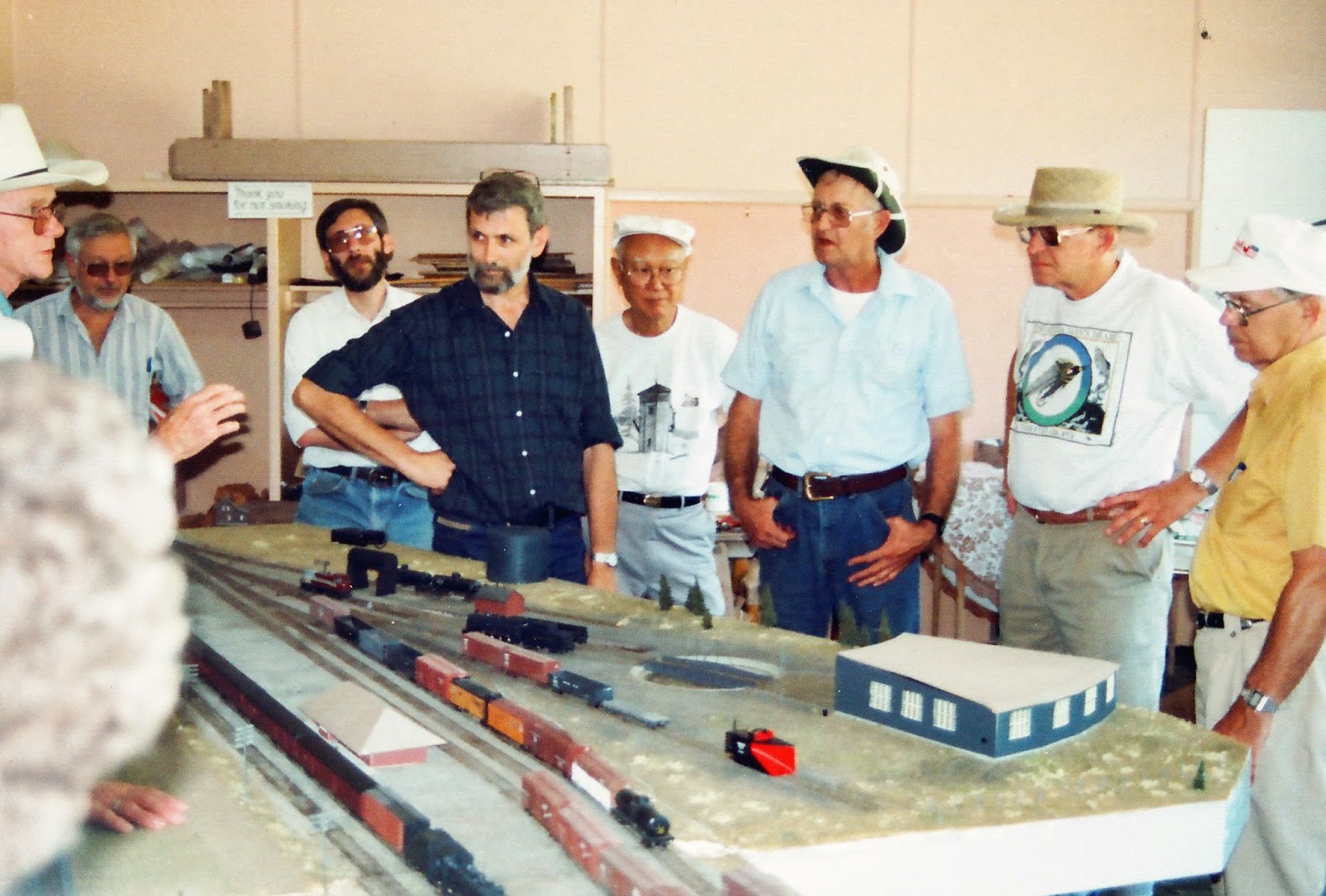 Can't remember this particular discussion but obviously everyone is listening.  Several men commented on the inappropriateness of the snowplow because it was a mainline single wedge plow.  A friend loaned me the model along with the passenger cars sitting in front of the station. About the plow, I did not know any better but the criticism was just the sort of thing I needed to know. 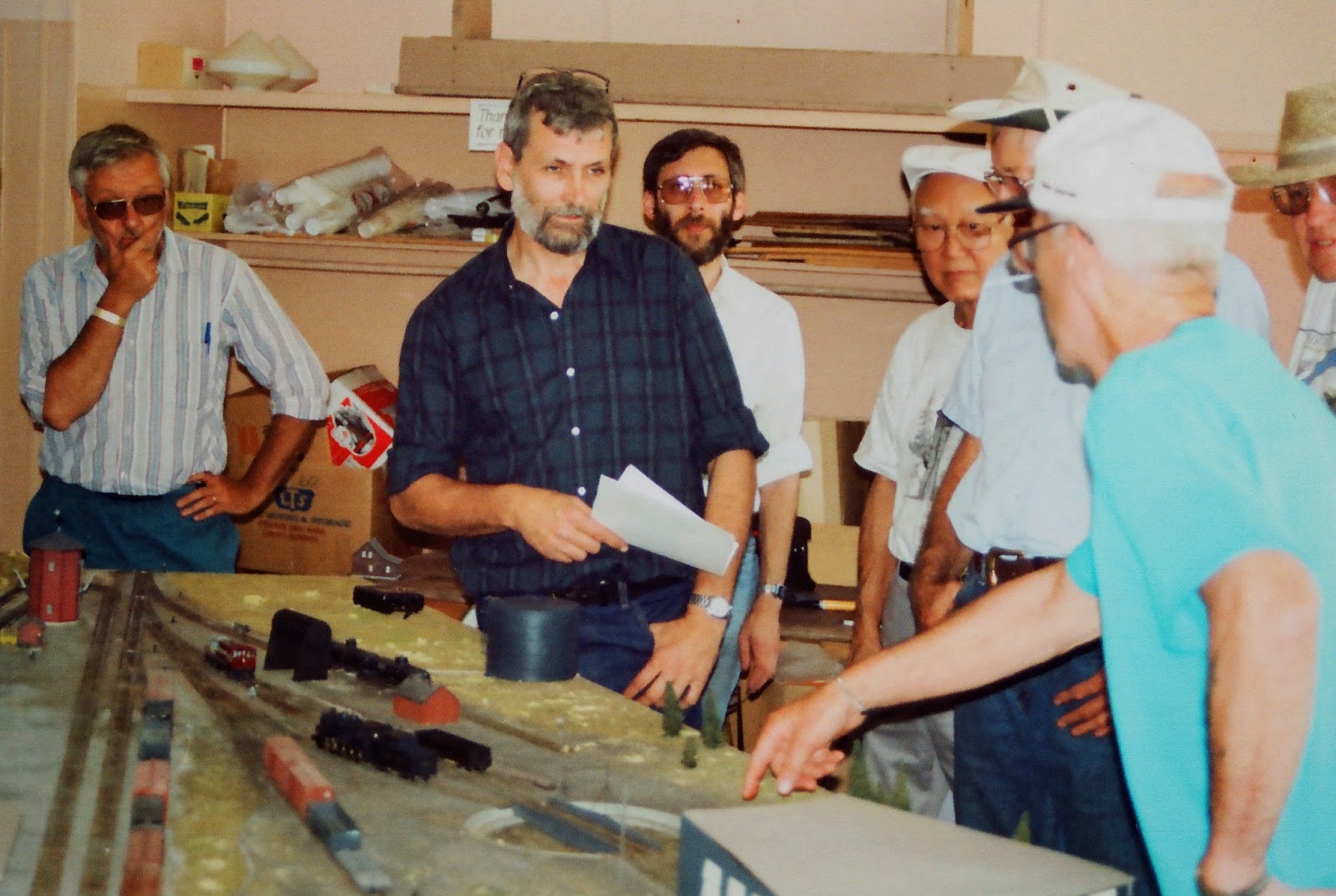 I did learn about the turntable's unique qualities and and then how one of the inexperienced hostlers drove some brand new GP-7's through a set of doors on the roundhouse.

Many of my rolling stock models were generic  at that time and I was not particularly proud of them.


Here I am asking about the ashpit; specifically did it still exist in 1949?  Answer was that it was gone by late 1950.  One more reason to choose 1949 as my target year since it is a nice feature to model.  This from the fellow in the cowboy hat who was the young hostler mentioned in a previous post.  The one who sent three freight cars on a freewheeling trip down to Brodie.  Engineman Tubby Moore in the red cap argued with Conductor Gus about a few things in good fun but both were very informative about how they worked the yard.  Fireman Wilf (blue cap) had a few stories to tell and provided music on his accordion at the nightly campfire.  My recorder is in hand.  Hope I turned it on for this conversation. 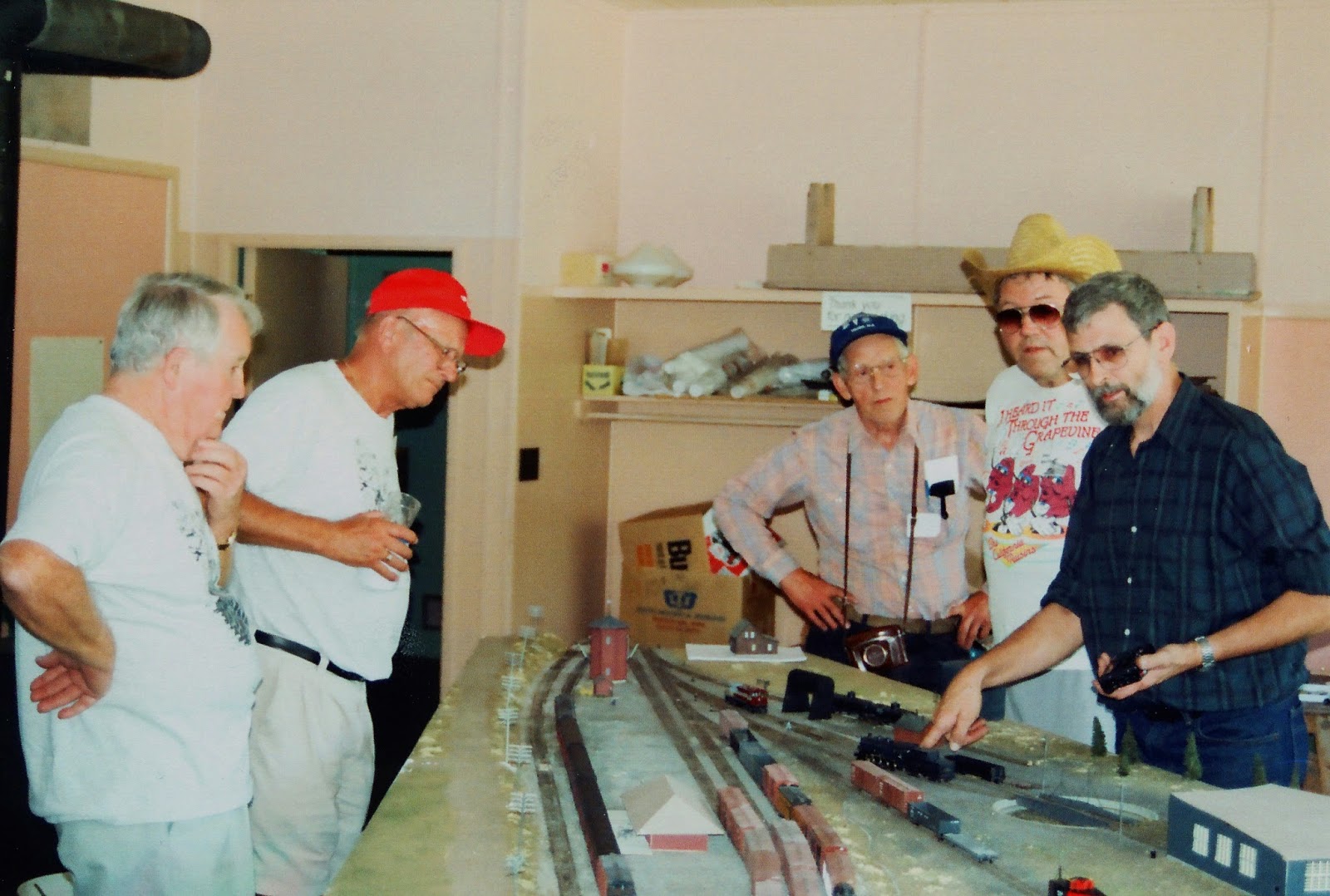 Here are Wilf and Evelyn discussing things about life in the small railway village while looking at old photographs.  Evelyn grew up in Brookmere and had things to share about her childhood activities, one of which we will get to.  Wilf fired engines up and down the Coquihalla for three years or so.  Being a handy, mechanically-inclined fellow, he maintained the stationary engine for the hoist on the Coal Chute when it was situated on the main track in addition to his duties as a fireman.  To one of my questions he affirmed that his engines on occasion, did indeed run light down the Coquihalla sub for a push back up.  He quit in 1944, choosing to pursue a career in automotive mechanics. 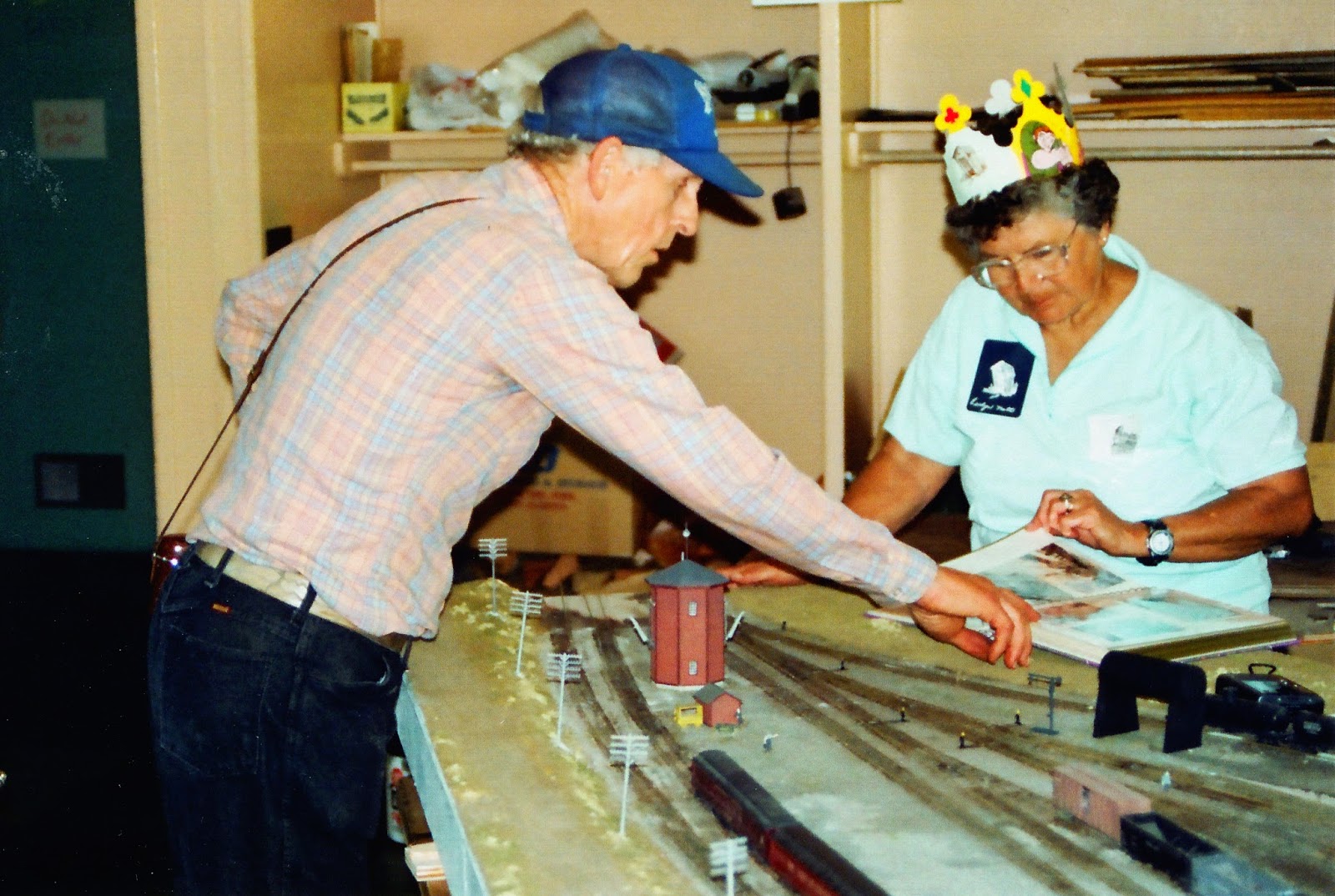 On the second trip, the layout looked more complete but unfortunately, we have no photos of it.  Several fellows did a lot of taping and one of them made a short documentary of the Brookmere Campout experience with a short feature on our modeling efforts.

Next up will be some information on how the crews worked Brookmere railyard and how we work the model version.  Until then...