SOME OF THE BELLS AND WHISTLES


It is apparent that only a few model railroaders are familiar with the rules concerning the use of bells and whistles by train crews.  Perhaps this is a result of sound-equipped locomotives only becoming available in the last few years.  In an attempt to further enhance our enjoyment of model operations, here are a few of the basics according to our reading of the rulebook.  We do not seek perfection in these details nor are we totally consistent in our use of the Train Signals.  This is partly due to the short distances of our mainlines which necessarily require just as much compromise and moderation as in our other modeling efforts.  Ever seen a fully working brake system in N-scale or working cut levers in HO?

These "motion pictures" are for illustrative purposes only.  They are not meant to present an exiting rail-fan experience so the quality of the images is mediocre due to a camera rated at a mere 6 Megapixels.  My thanks to Engineman Green who patiently followed the grumpy director's instructions on many takes. 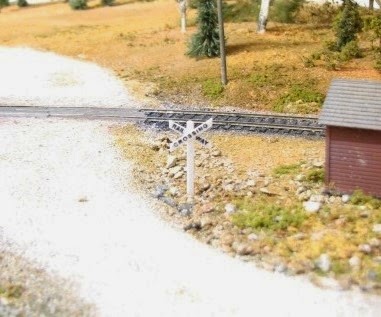 Probably the most familiar signal to railfans and model railroaders is the "Fourteen L".  This is the signal used at public grade crossings which are guarded by white cross-bucks.  Rule 14 (l) describes this signal as --- --- o --- meaning that two long blasts are followed by a shortish toot followed by one long blast.  This signal is sounded 1/4 mile from the crossing and is "to be prolonged or repeated according to the speed of the train until the crossing is occupied by the engine or cars".  Other occasions for the use of this signal are "where the view is limited" by such things as the curvature of the track or when approaching a tunnel.  In these situations, there is usually a whistle post planted at an appropriate place on the engineman's side.  Our first cinematic spectacular illustrates the use of Rule 14 (l).  Here we see No. 806, a third class mixed train, a k a the "Jitney" from Spences Bridge and Merritt "powered" by dinky little Engine 443.  Note the use of the bell which must also be sounded "until the crossing is passed" (Rule 30).

In the next sequence a train is approaching a station. Rule 30 again applies:  "Engine bell must be rung... while moving about stations."

Also note that a long blast of the whistle was sounded on its approach.  Admittedly, this is a great deal shorter than the stipulated "one mile from stations, watering and fueling points, junctions...and railway crossings at grade." (Rules 14m, 31) But a scale mile is hard to model and operate.  On the other hand, we could say that this engineman is being extra safety conscious.  And it does help our Station Operators to hear of a train's approach.

In this next sequence, the same train is leaving the station.  The bell is rung "when an engine is about to move..." (Rule 30)  And in this case the train is also about to enter a public crossing at grade so another clause of the same rule 30 applies as well (requiring the sounding of the bell until the crossing is passed).
The sounding of the whistle of two long blasts means "Release brakes. Proceed" (Rule 14 b).  And if a trainman, porter or passenger is lingering on ground, he/she better climb aboard pronto. The grade crossing is being guarded by the head-end brakeman as the engine begins to enter the crossing.  He is hard to see but he is there - at least he should be.

I hope you have enjoyed this cinematic experience.  There is more to come.  Our camera and train crews spent many hours on location and will continue to edit the many hours minutes of film in our studio.  Next up is a Way Freight sequence.  See you next week.