On our version of the Kettle Valley, we earnestly try to emulate the prototype without losing sight of the whole purpose of an operating session.  And it needs to be said that the purpose of an operating session is to have a good time in pleasant company.  As with any game, there are rules which serve to define and enhance the play.  Railroad rules and standard practices are adapted to the models for realism and enjoyment.  Basically, we indulge in a role-playing game that somehow connects us to the men and the machines that in some undefinable and mysterious way appeal to us for a variety of reasons.  Many of us have had the passion for trains since we were young and while it may subside for a while such as when we were getting our family and/or careers started, it often reappears later in life when there is a little more time for leisure activities.  Certainly that is my situation and I know I am not alone in this regard.
We could hang out at the local hobby shop or join a club, attend periodic train shows and conventions or help a friend on a regular basis build his layout.  And these are all good and valid ways of participating in the social aspect of the hobby.  For a number of people, an operating session is another way.  In this post, we will look at some basic terminology that can help to enhance one's enjoyment of the operations experience.  Rule book references are included.

Our main reference work is a 1951 issue of the Uniform Code of Operating Rules for the CPR shown at the top.  We also have a 1949 version and the 1962 Revision.  In effect, we borrow from all three books for several reasons which we will eventually discuss but for the most part, there are only minor differences between them.

An on-line copy of the CNR rulebook is published here: http://cnr-in-ontario.com/Rules/index.html  It has the same date of publication as our reference work for the CPR and on first glance seems to be identical.  This resource could be downloaded or bookmarked.

For American Railroaders, try this link for an on-line version of the rules used on the Great Northern and Milwaukee Railroads in 1959:   http://www.westportterminal.de/download/rule-book.pdf  There are a some differences in the USA version but it is largely the same as the Canadian versions.  For example, Bell-ringing as laid out in Rule 30 in the USA is the same as that in Canada.

It should be noted that all of these UCOR books have been obsolete for many years now.  Dispatchers are called RTC's (Rail Traffic Controllers) and modern Computers and Communications have led to the extinction of Train Orders and Operators.

A Few Basic Definitions and Rules from the Rulebook  Comments are written in italics.

Train—An engine or more than one engine coupled, with or without cars, displaying markers.  [ordinarily caboose markers.  Markers are displayed on the rear of the tender when an engine is running light and forward] 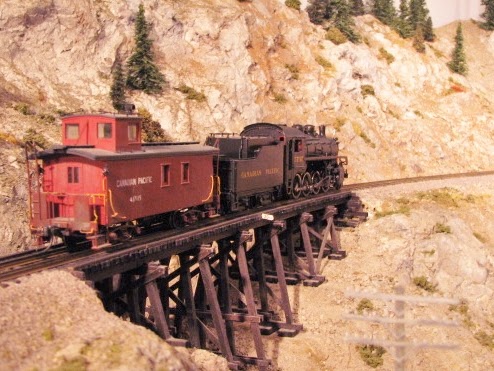 This is a train.  Without those little kerosene lamps, it would not be a train!  It is an extra train as evidenced by one of two flags just visible on the engine's boiler front.  Extra 3747 East.

Superior train—A train having precedence over another train. 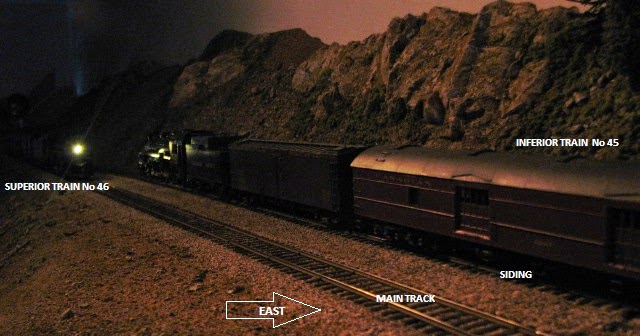 Two first class trains meet at Romeo at 2:45 in the morning.  No. 45 has taken the siding for No 46 because it is inferior by direction to the oncoming No. 46.  The Timetable specifies Eastbound trains as superior to Westbound trains of the same class.  CPR practice for passenger trains was to issue a train order for the meet even though it was scheduled.  This added another level of safety.

Main track—A track extending through yards and between stations, upon which trains are operated by time table or train order, or both...[yardmasters/crews have no jurisdiction over the main track within yard limits but can use it under certain conditions]

Siding—A track auxiliary to the main track for meeting or passing trains.

Yard—A system of tracks provided for the making up of trains, storing of cars and for other purposes, over which movements not authorized by time table or train order may be made...

Time table—The authority for the movement of regular trains subject to the rules. It contains classified schedules with special instructions relating to the movement of trains and other important information. 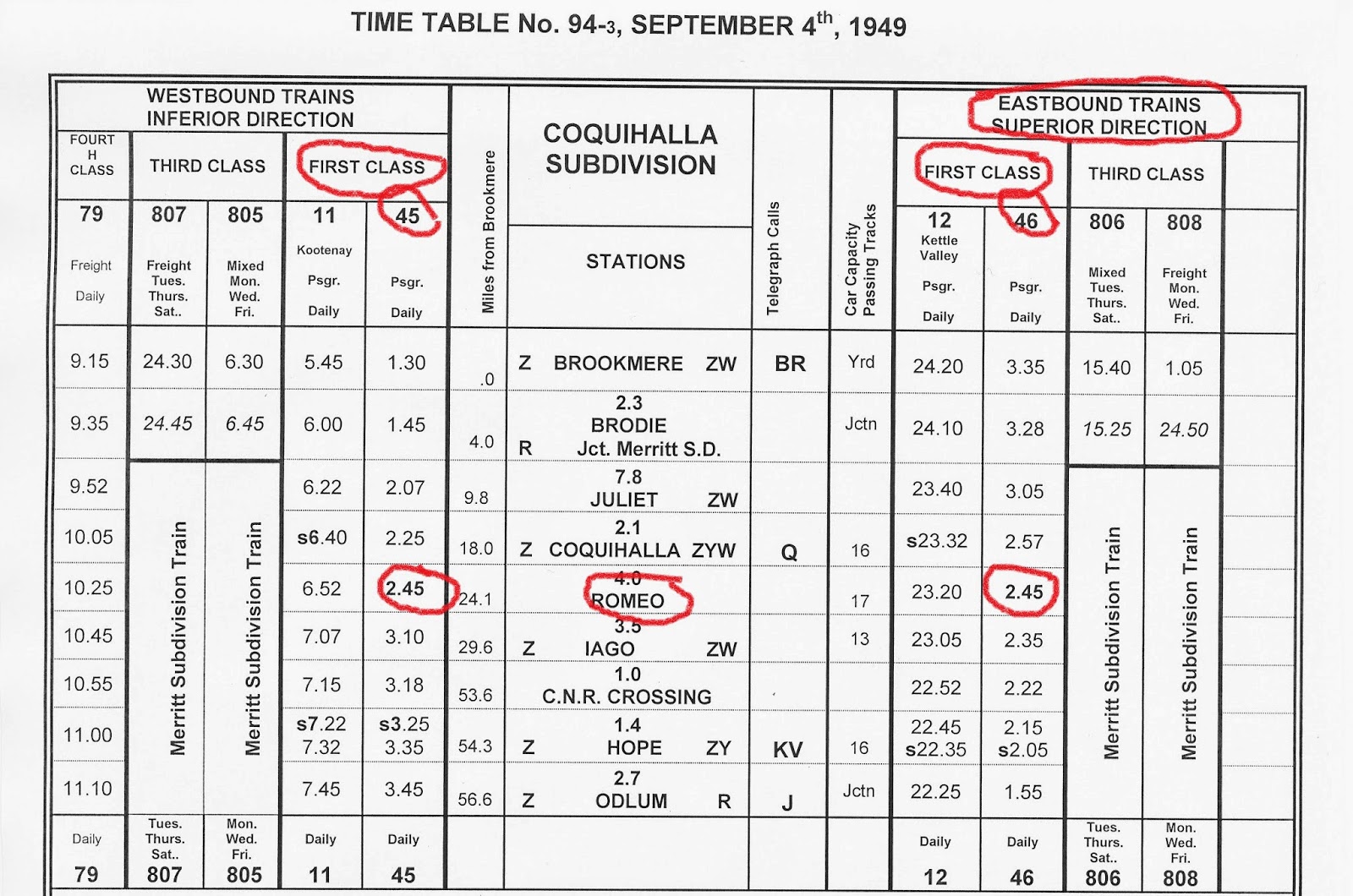 A page from our "Employee Timetable" highlighting the meet pictured above.  Class and direction are specified.  Any of these schedules can be annulled or superseded by a train order. Note that the time, 2.45, is in bold print in both columns to denote a meet.

71a. (Single track) Direction is superior as between trains of the same class.

72a. (Single track) Trains in the direction specified by time table are superior to trains of the same class in the opposite direction.

Note how the word "permission" is not used.  The dispatcher does not give permission, he confers "right over" to a train through train orders.

An interesting illustration of this was that on the KV, it was not unusual for a Dispatcher to confer right on a lowly drag freight to continue the struggle up a steep grade uninterrupted while a first class passenger train was made to take the siding.  The passenger train could easily make up any time lost with her relatively light consist whereas the freight could have trouble getting under way again after taking the siding, thereby tying up the line.

Until next week, when we will possibly include some "movies" to further illustrate operations on the Kettle Valley model Railway.