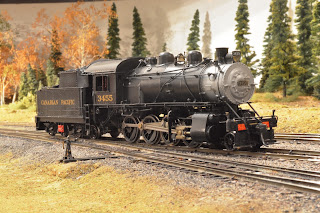 A beautiful brass model steam locomotive was bestowed on the KVMR by way of three estates.  It is a model of the CPR M 4 class which was treated of in a previous post on Kettle Valley Consolidations. It can be found here: http://kettlevalleymodelrailway.blogspot.ca/2014/06/kettle-valley-consolidations-part-1.html

When it came to us, the model was covered in a very poor paint job which only obscured the exquisite craftsmanship of the original builder; a man by the name of Doug Murray who lived and worked in the Vancouver area.  Apparently he was a VSE stock broker and his hobby of building brass models was a therapeutic release from the pressures of his profession.  Among other things he built a detailed model in brass of a pile driver.

Major components of the 3400 were scratch-built and fitted out with several commercial castings.  The only other commercial items seem to be the under-frame, cylinders and drivers.  The rivet-work is of a very high quality, perhaps a little oversize in some cases but very clean and precise.  We will describe the craftsmanship in greater detail with pictures and the work we had to do to get the model running smoothly.

Boiler  It appears to us that the boiler was rolled by the builder.  A friend of ours disputes that but the boiler courses were at the very least modified in length and with rivets and other details added, then reassembled.  The running boards (which are often a challenge to fabricate and mount) conform closely to photographs of the prototype.  Here is the left or fireman's side of the model after sandblasting.  The cross-head guide rods were masked off from the abrasive. 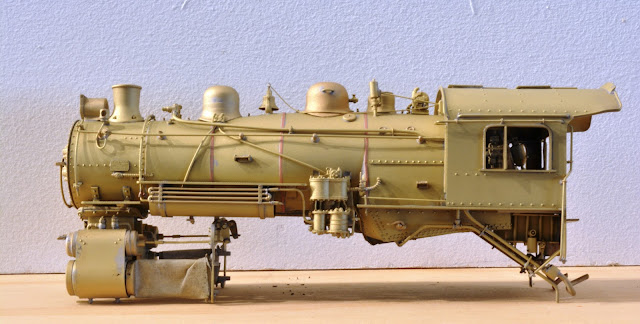 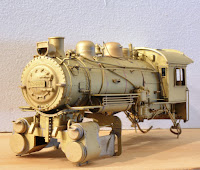 It could well be that the cab was scratch-built or at least heavily modified from a commercial model.
The boiler front is perfect and had an etched number board bearing the digits 3400.  Curiously, according to photographs of the actual number 3400, she did not have the running board configuration that the model was given and differed in two other major details: 1.  Number 3400 and many of her sisters had a step in the running board on the right side under which was located a second air tank; 2.  The placement of the bell varied. It could be located as in the pictures or alternatively it could be attached to the check valve behind the smoke stack. In this case, the sand dome was moved further to the rear.  Below is the right side or engineman's side with the straight running board.  One other major detail variant in the 3400's was to re-position the headlight to the center-line of the boiler front.  This was the standard practice of the late steam era on the CPR but many older locomotives retained their high headlight to the end. 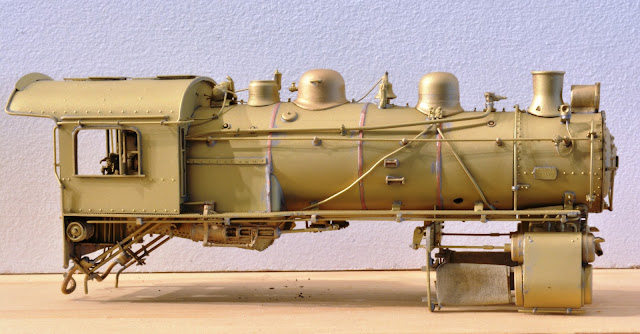 To match the model to a Kettle Valley locomotive in our late steam era (number 3448) we considered changing the right-side running board, adding the second air tank and re-positioning the bell and dome.  However, we found a photo of a prototype match to number 3455 parked beside the Penticton roundhouse in 1938 so in the end we chose not to change these three significant details on Doug Murray's beautiful model but give her the number 3455 which would not be too far from historical reality.


Chassis  The chassis received a serious modification by Doug to the driver slots to achieve the appropriate spacing for the drivers which was uneven.  The overall dimension from the first axle to the fourth was correct as supplied.  But the spacing of the middle two axles was different.  Doug filed the front faces of the middle two axle slots and added brass fillers to the rear of these two slots in order to bring the second and third axle forward and to provide a larger spacing between the third and fourth drivers.  By doing this, he achieved a closer match to the prototype as can be seen in the following CPR diagram.  It would seem that the chassis was originally designed and built for somewhat larger drivers with even spacing.

Drivers  The model ran very poorly and after considerable labour spent on the chassis and drivers, we found that one of the wheels on the gear axle was loose.  So, it would run for a few minutes but would soon develop a mild stutter and eventually a severe bind to the point it would not move.  Accordingly, all drivers were re-quartered and the loose one eventually affixed with "Thread-Locker".  In tuning the chassis and drivers, we had to shim the slots to reduce the amount of play between the slots and the axle bushings.

Gearbox  The original drive gear was exposed on the bottom by lacking a cover plate.  This is considered a deficiency that would only invite problems as time went on by attracting foreign material into the gearbox and its lubricant.  A new NWSL gearbox was installed and the motor remounted. Model airplane fuel line was used as the universal to join the gearbox to the original Mashima motor.


Tender  Here is a photo of the locomotive with its switching tender.  These tenders had a back-up light mounted on a stand for night work and large foot-boards fitted on the rear.  The model tender is mostly scratch-built with a few commercial castings and the trucks added.  Very, very nicely done. 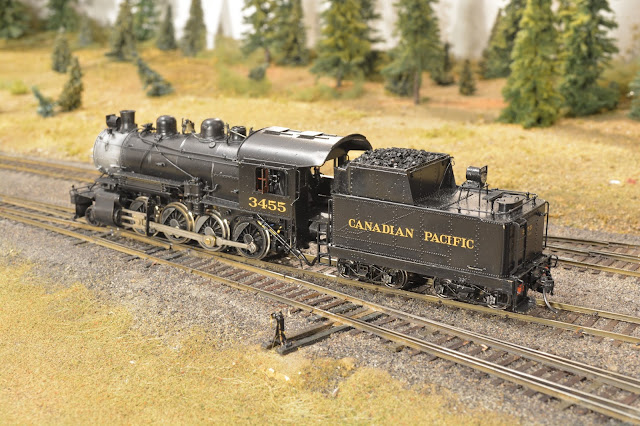 Unfortunately, the coal bunker extensions had to be modified for our tight model curves by cutting notches in the front corners.  Otherwise, there would be a direct short between the extension and the cab roof on any track curve sharper than 60" or so.  But the notches are hardly noticeable and seem to pass as prototypical.  It is most desirable to couple the tender as close to the cab as possible.

Decoder  A Tsunami Heavy Steam decoder was installed in the tender.  Our standard Mega Bass speaker made by Soundtraxx was fitted out with a cylindrical lead enclosure held together with Capton tape.  This was mounted right forward under the coal bunker in order to maximize the height of the speaker enclosure on the principal that the larger the speaker box the deeper the sound.  The decoder was placed behind the speaker and the wiring connected.  Two plugs were used between the tender and locomotive.  One two pin connector carried the blue and white wires for the headlight and the three pin plug carried the red wire for the loco pick-up, and the grey and orange wires for the motor leads.  It was a squeeze to get the wires routed into the cab and around the motor properly.  The lead speaker enclosure adds significant weight to the tender thus providing good electrical contact between the rail and the tender wheels. 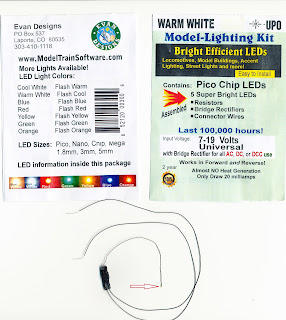 Lighting  We favour the LED lamps made by Evan Designs: http://www.modeltrainsoftware.com/  They are very tiny and have a built in bridge rectifier and appropriate resistor.  They can be connected directly to the lighting outputs of the decoder and are not polarity sensitive.  Here are the front and back of the package together with one of the LED's and the wires.  The actual lamp is indicated by the red arrow.  Very small indeed and a very bright light is produced.  Care must be taken to mount these so that the wires do not scrape the metal of the boiler to short out.  They are fixed in place with white glue which helps to insulate them from the bare metal.  Some heat shrink and a two pin plug can help too.  For more info on working with these amazing lamps see the October issue of Model Railroad Hobbyist: http://mrhpub.com/2016-10-oct/online/


Painting and Lettering  The model was blasted with 220 grit Aluminum Oxide Abrasive.
Painted with Scalecoat I Paint: http://www.minutemanscalemodels.com/  CN Sig warm black is our preferred colour of which we have a dwindling supply.  Scalecoat I - Graphite And Oil was applied to the smokebox.
The decals are by Black Cat: http://www.blackcatdecals.com/product/cpr2345-dh-steam-engines-in-dulux-gold/  Black Cat provides the warning placards on the footboards both front and rear that are added according to photos of CPR switchers as well as the fire hose decal for the box under the tender.  One day we will weather the model but for now we like her in her pristine outfit.

A final note on her use on the layout.  The prototype Brookmere did not have an assigned switcher as far as we know.  Only Penticton had one.  However, No. 3455 fits in well with our operating scheme and works the east end of Brookmere during our operating sessions.  This has worked out well as a good yard crew can efficiently manage the east yard.  In reality, road crews would do their own terminal switching but in practice on our layout, an assigned yard switcher has been found to expedite things better in our compressed operations format.  Glad to have this exquisite model grace our layout.