Sometime in the early 1950's someone took this photograph which eventually ended up in the possession of the Penticton Museum and Archives.  They have kindly allowed us to publish this fine view which looks railway west (roughly geographical south) down the passing siding of Coquihalla station.  The Water Tank is prominent and the Operator's Shack is seen to the right of the track beyond the siding switches.  The Penticton Archives staff are particularly accommodating to serious researchers and have a wealth of information and photographs on the Kettle Valley Railway. But not all of their wealth is accessible, there being so much of it.  Funds for clerical help from interested donors would be most welcome I suspect. 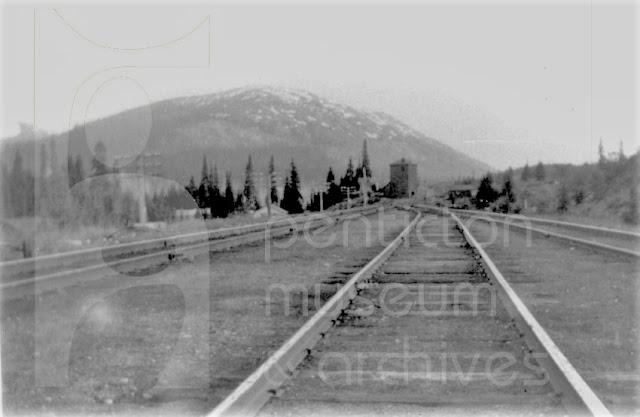 We present here from other sources, some vintage photos for modeling purposes and for your enjoyment.

The late Lance Camp was an avid railfan, railway photographer and model builder.  He was very generous to me and I am sure he would be most pleased to share the following photos with you.  The first is a look railway east where we see the cottages of the Company workers.  Again the Tank is prominent with the section house nearby.  The section house is not yet clad in Insulbrick so that also suggests a date before 1950.  The whitish roof of the fishing Lodge is just visible in the distance.  And note the velocipede in the foreground - a sort of rail-cycle. 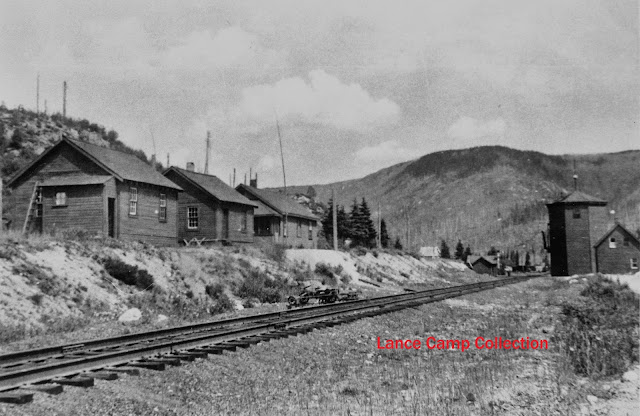 Another photo from Lance's collection shows their backyards of which the film provides even better detail.  Perhaps Mr. Jackson took this still as well. 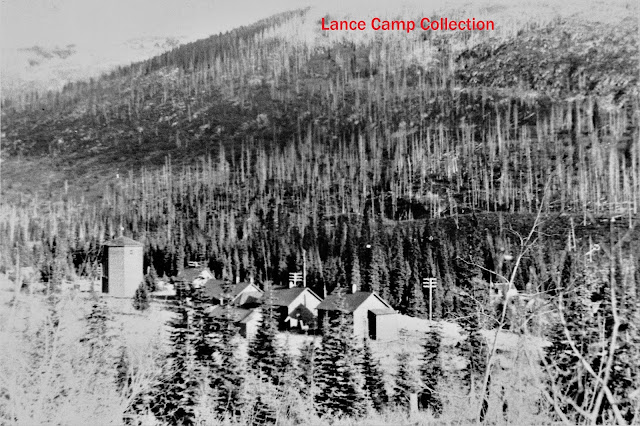 A final shot of buildings is given here to show the best we have of the Lodge itself.  This one will be very useful to your blogger when he attempts to give the passenger trains of the Kettle Valley Model Railway a reason to stop at the station. 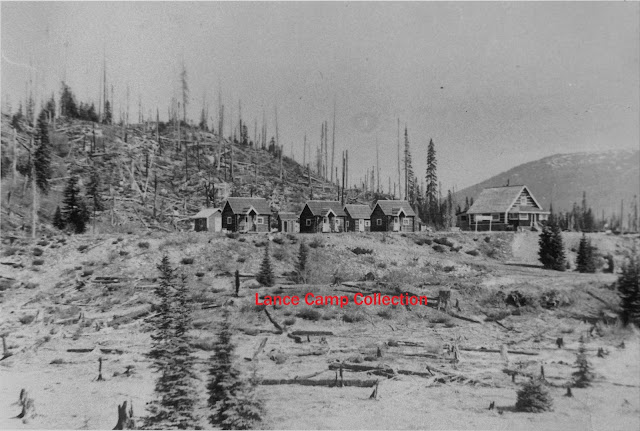 Now we turn to some interesting shots from an airplane.  The provincial government of British Columbia had an aerial photo taken of our subject and a close crop is presented here.  It was taken sometime after 1954 as the extension to the passing siding is evident.  One can only speculate as to what the circles and other marks on the photo represent.

An even closer crop from the same photo is now shown of the station area.  It clearly shows the various buildings including the private dwellings which do not appear on the CPR drawings.  The structures are labeled as follows:  SH section house WT water tank  TH tool house SS station shelter BH bunk house ML main lodge C cabins  What is mainly visible are the shadows of the buildings cast by the bright sunlight of the day. 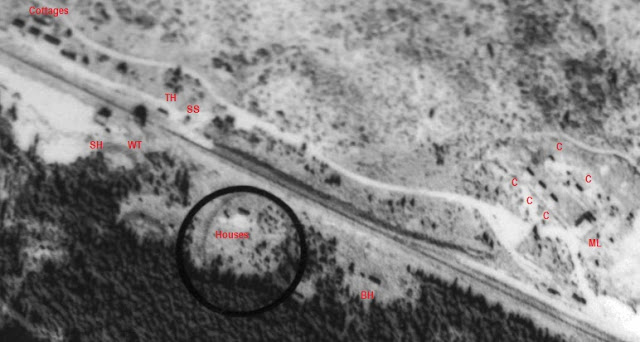 There is interesting detail of this area in the aforementioned film that was recorded by Mr. Joe Jackson.  The film shows passing trains, the railway workers, lodge guests and hosts with some good shots of their buildings.  It also shows an eastbound freight powered by two 3600 locomotives slowly passing by the water tank.  The film was released on YouTube by the Royal British Columbia Museum archives and here again is the link: https://www.youtube.com/watch?v=gw85LKz6dQo
The Lil-Joe lodge building that is depicted in the film is somewhat different from the one that appears in later still photos.  Whereas the film shows a frame building, the later shots suggest a much larger two-storey log building. Neither do the guest cabins appear in the film.  But the fish were biting.

Here is a more recent view of our current area of interest taken from a position close to where the cottages would have been.  Looking down at the approach road which occupies the former right-of-way we see the entrance to the modern day lodge which is situated by the lake unlike that of Joe and lil Jackson which was up on the hill off to the left of the photo.  The flat area where the dump truck is parked is the approximate site of the old water tank and section house.  The Coquihalla highway is seen on the left at the top of the embankment. 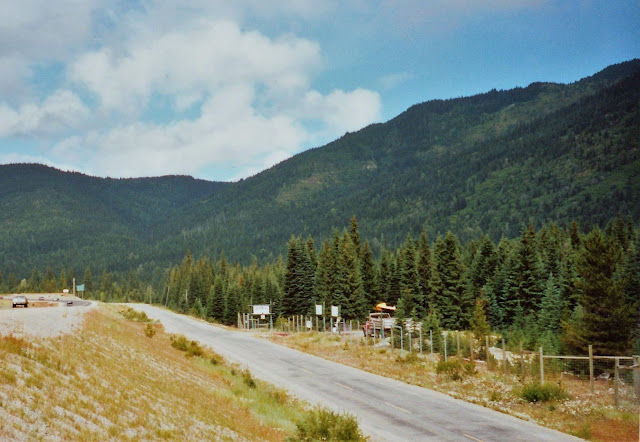 A note about present day accommodations in the area:
We will finish our presentation on the Coquihalla station with some photographs of steam trains in action.  The first shows a hard working pusher on the tail end of an eastbound extra freight.  It seems that the road engineman has just eased off on the throttle as he approaches the summit which lies a few feet ahead.  No doubt the hogger on the pusher will sense that is the case and ease up on his own throttle too. 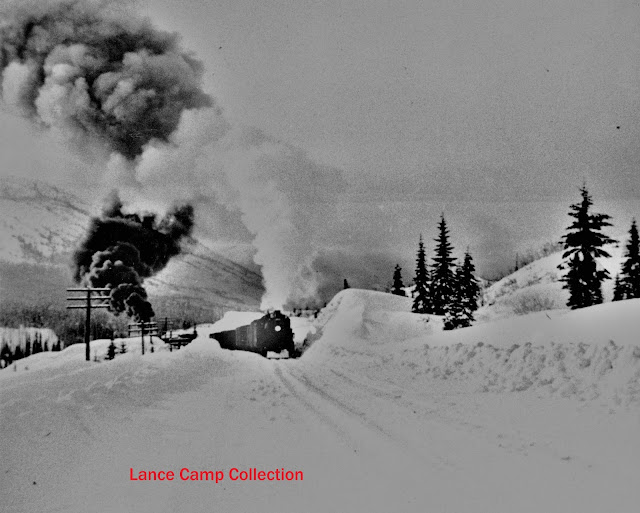 Here we see another eastbound freight with one (or probably two) 3700's on the point passing through what could well be the same cut that appears in the previous photo.  This shot has been published before in Turner's Steam on the Kettle with a credit to the Dave Wilkie Collection.  A curiosity is that neither engine displays extra flags so it is possible that this is No. 80 and the date is the Spring of 1953.  (Is that snow on the ground on the left?)  For many years only westbound freights ran with schedules whereas the issuing of Timetable No. 101 in April 1953, brought a major change.  The CPR ran a schedule east on the Coquihalla Sub as No. 80 and abolished No. 79 for that period and running extras west.  The date is certainly after 1950 as the first boxcar in the train sports a "three step" lettering paint scheme which were first applied in that year.  And the 3700's were only common after that date.   Very interesting...
In the bottom right hand corner can be seen a local lad who is looking at the camera man as he trips the shutter.  The walkway in the foreground near his head suggests that the cottages are immediately to the photographer's right.  The pusher is again working hard in the rear as evidenced by the heavy smoke she is producing.  This scene with steamers would be impossible by the end of 1953 when dieselization was nearly complete. 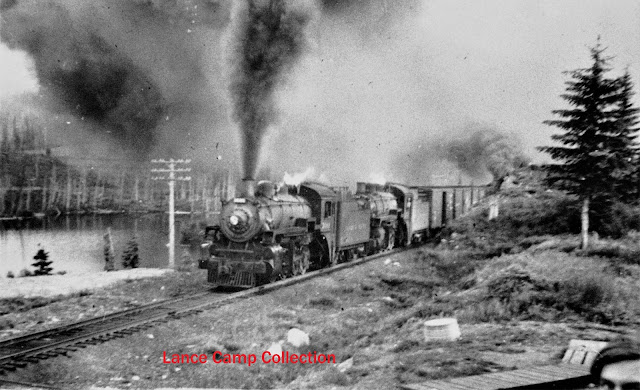 A nice shot of a westbound freight on the main track through Coquihalla and it is likely Number 79 or even second 79 as there are no signals displayed.  This shot was provided by KV veterans, Dick Broccolo and Alan Palm who were very supportive of my technical interest in their railway.  Going by the shadows it is probably mid-afternoon either side of winter.  The Canadian Pacific consolidation No. 3742 came late to the Kettle so it is again likely the waning days of steam on the railway.  The track is dead level here and she is not showing any smoke so she could be easing to a stop for the crew to set retainers before descending the hill.  Somewhere down the hill there will likely be a meet with an opposing extra but not at Coquihalla today as the westbound would be standing in the siding already unless the Dispatcher has fixed the meet for them at the summit. 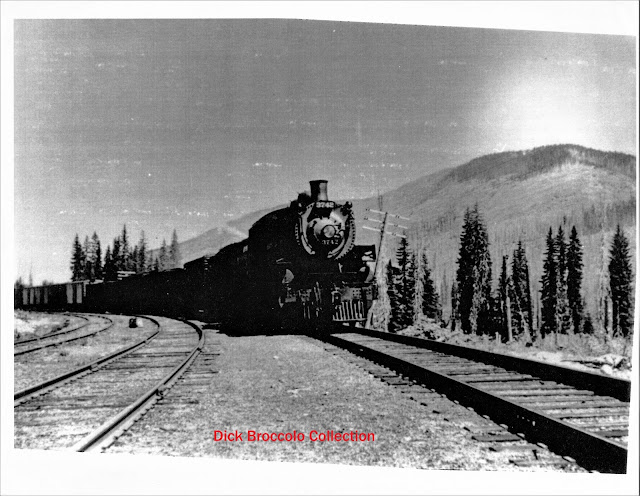 In the following shot, it looks like the Dispatcher has indeed fixed a meet.  Both "boards" are down for the "middle order" which would have required No. 79, engine 5169, to hold for the Extra 3629 East which is in the process of taking the siding.  Kindly dispatchers were sometimes inclined to help a heavy freight struggling up the hill to not have to stop for a meet on the steep grades of the Division.  Once the superior train was by, restarting the train on the 2.2% ruling grade could be a challenge for two or even three locomotives.  I was told that the dispatcher would sometimes hold a passenger train for a freight if he could time it well.  Passenger trains could easily make up time downgrade whereas a stalled or stalling freight could tie up the mainline for some time. 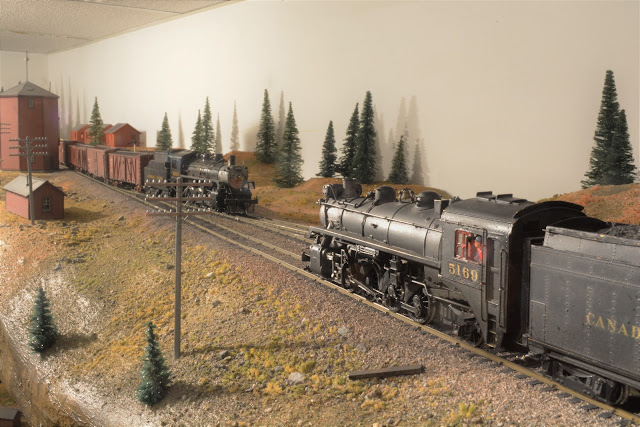 Well, once again there has been much more commentary to share than expected so this post is of considerable length and has taken a good bit of time to compose.

The next few posts will be in answer to two readers about other stations on the KVR, notably Hope and Tulameen which they are considering as modelling subjects.  But there are so many more items to write about: locos, boxcars, DCC systems, decoders, scenery, trackwork, operations, bridges, buildings.  The subjects for the KVR modeler are seemingly endless.  Till next time;

Update: The photo of a freight leaded by engine 3742 was incorrectly called an eastbound.  A reader caught the mistake and it has been corrected to read westbound.  The rest of the train identification is appropriate in suggesting that the this is No 79 or Second 79.