The practice on the Kettle Valley Railway regarding Station Mileboards will be treated here and a few suggestions as to their fabrication in miniature.   Our first photograph is of a typical Mileboard on the Kettle Valley; this one for Rhone on the Carmi subdivision.  Dave Love would have taken this in the 1970's before abandonment and track removal in 1979.  The track looks a bit shiny so this photo may even predate the last trains in 1973. 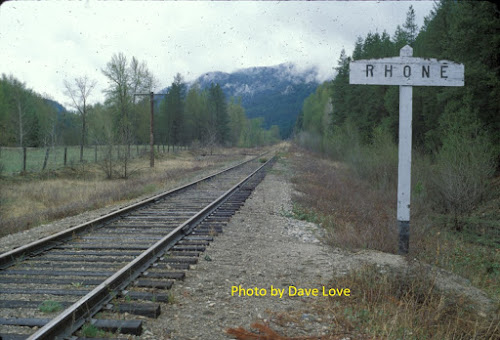 As might be expected, a Mileboard sign was erected about one mile distant from a station that was listed on the Employee Timetable whether that station had a physical building or not.  Theoretically the distance was one mile from the centreline of the station or from the centre of the passing siding.  The purpose of the Mileboard was to advise the engine crew of the distance to the station which seems to have been more than one actual mile of 5280 feet.

This is our conclusion after an analysis of Grade Profiles in our files of CPR documents.  In the following portion of the Grade Profile of the Coquihalla Subdivision, the reader can see that the west Mileboard sign was located at about Mileage 19.2 whereas, Coquihalla station was located at Mileage 18.0.  Hence, the distance from the Mileboard to the station is actually closer to 1.2 miles.  The vertical lines on the drawing are spaced 1000 feet apart in the original scale of 400 feet to the horizontal inch.  The original vertical scale is 20 feet to the inch so as to more explicitly illustrate the grade and sundry right-of-way details.  The circled number 127 which is crossed out represents the mileage from Penticton set up in 1916.  The new mileages starting at Brookmere were adopted in April of 1940. 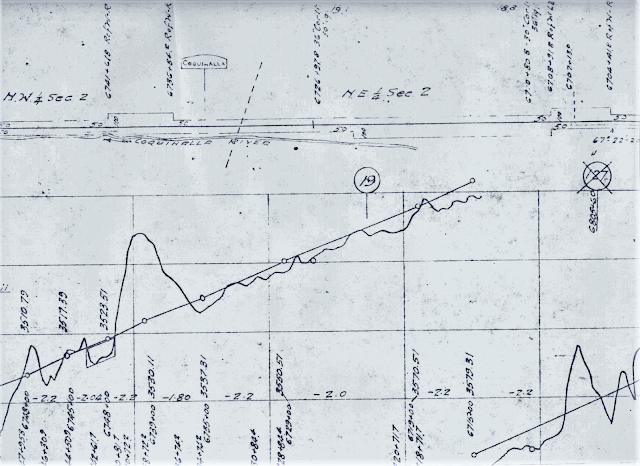 There were two other reasons for the Mileboard.  A very important purpose was that the Mileboard served as the Yard Limit sign according to what was told to the author by two KV men at the annual Brookmere camp-out some years ago.  Even though the CPR had a standard yard limit sign, there is but one "living" example of it to be found in the Midway museum.  Other than that there is little photographic evidence to contradict their statements.  At this time we are not persuaded either way on the use or non-use of the Yard limit sign.  But we digress...

Where there were yard limits for a station on the CPR, third class, fourth class and extra freights would slow to restricted speed because there could be another train within the yard limits.  This was not the case for the KV station of  RHONE because the Timetable did not indicate that there were yard limits as seen in this excerpt from the Timetable of April, 1949.  Rhone simply had a passing track of 35 car capacity.  No other operational symbols to note. 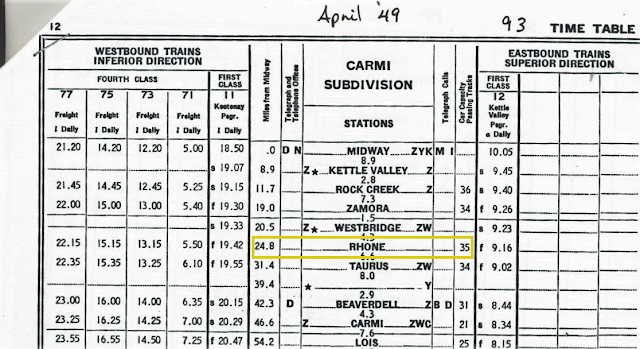 Unlike RHONE, the next station to the west, WESTBRIDGE, did have yard limits, the letter "Z" appearing on either side of the station name.  No doubt, the yard limits were designed to allow for wayfreight switching of the local industries which were mostly shippers of forest products.  According to Smuin, WESTBRIDGE had a station building and an agent to handle the local business.  Even though an agent was assigned here, the station did not rate a call sign and thus no train order board.  The agent would still be in communication with the dispatcher by telephone and and be able to offer telegraphic service to the local community.  The Timetable also shows that a water tank (W) was situated there.

Further down the list, is the station at BEAVERDELL at mile 42.3.  This station had an Agent for the local customers who were mostly in the lumber business and the Highland Bell concentrator whose loading ramp is off to the right.  We dealt with Beaverdell in a previous post here: http://kettlevalleymodelrailway.blogspot.com/2014/05/beaverdell-and-highland-bell.html

The tiny building also served as a Train Order station as indicated by the call sign "BD" in the Timetable as well as by the Train Order Board in front.  The photograph was taken by David Davies in 1966 whose vast collection was acquired by the University of Northern BC.  It is well worth a visit.  https://search.nbca.unbc.ca/index.php/david-davies-railway-collection 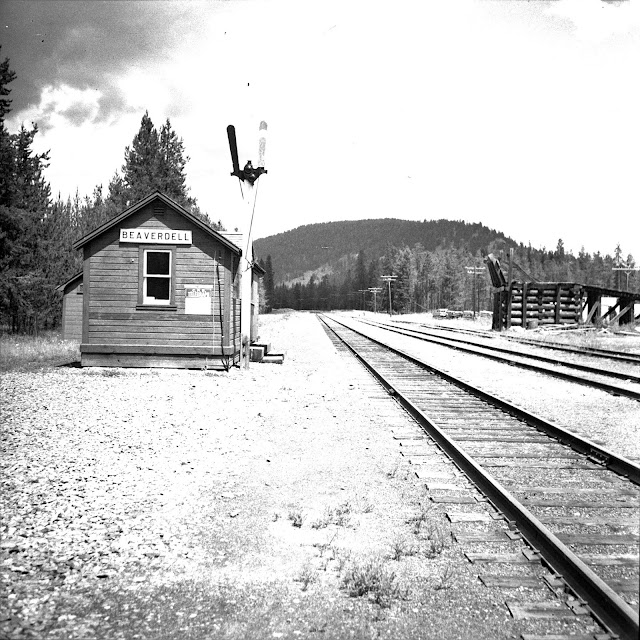 Note on the left side of the Beaverdell entry on the Timetable, the letter "D".  This establishes that the Operator was on duty only during the "DAY", i e, normal business hours.  The fact that BEAVERDELL was a Train Order station has meaning and relevance to the Station Mileboard - even in model operations.   RULE 14 (m) specifies that a long blast of the whistle must be sounded "one mile from train order offices..."; consequently, an engineman would sound the signal at the station mileboard.  This signal would alert the agent to the approaching train (should he perchance be "resting his eyes") and he would turn out to "PK" the train as it passed his station.

Regarding the specifications of the Mileboards we reproduce here the reproduction by Just IMAGINE Printing of the CPR standard drawing for the Station Mile Board.  It is far more legible than the original in our files.  Thank you Just Imagine Printing. 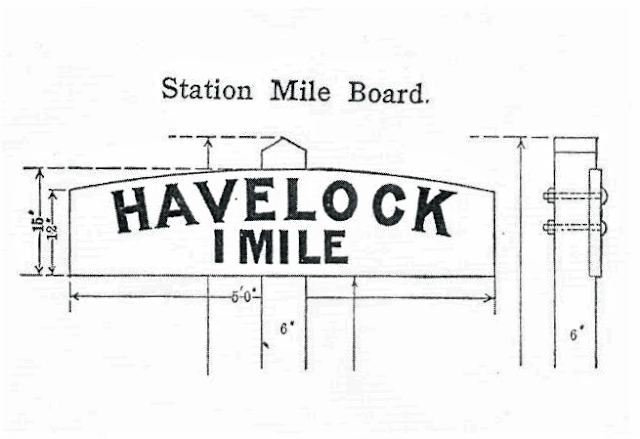 Here are our field notes for the Jessica Mile Board which has been preserved at the Hope Museum.   The measurements mostly correspond with the official drawing.  Other field measurements confirm that the boards were about 64" long even if the name was a mere 4 letters.  It was mounted on a post 6" square or sometimes a 6" or 7" round post.  One more specification; the sign would be located 10 feet away from the nearest rail and on the engineman's side of the right-of-way. 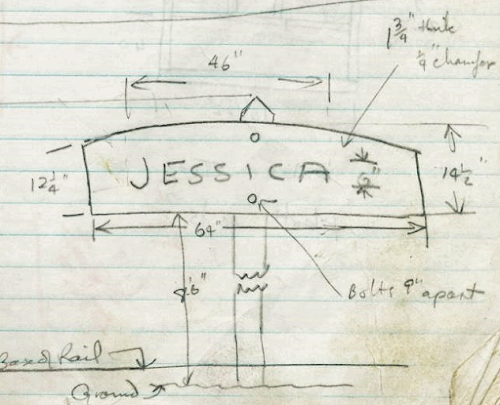 Here is screen shot of the JESSICA Mileboard in service in 1957.   The film by Dave Wilke of happy memory, was taken during the fan trip up the Coquihalla and was posted on YouTube by his son,  Mike Dunham-Wilkie.  It is available here: http://youtu.be/RiONq7ktj80  and here:

Thank you Mike for your generosity in publishing your late father's films.  More Coquihalla films and videos are linked in the YouTube site. 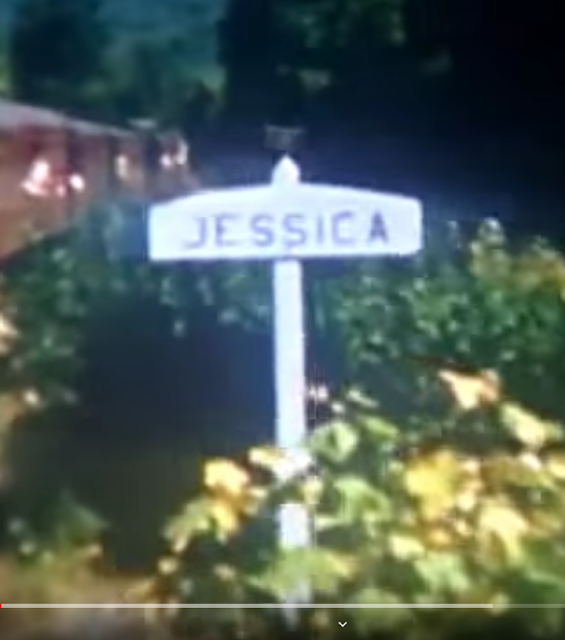 Notably, the lettering of the official drawing differs from the field sketch and the photos.  This discrepancy is due to the elimination of the wording "One Mile" from the sign as time went on.  Presumably these two words were considered redundant.  Photos of Mileboards from the teens and twenties show the lettering on the drawing but Mileboards in photos from later years usually contain only the station name such as this screenshot of the west Mileboard for COQUIHALLA from the same movie.  Originally, the board color was a light silver but later on this specification was eliminated and the boards were painted a basic white.  It almost seems that there are traces of the original silver showing through the white paint in this example.  Also note how the lettering is more compressed for the longer name. 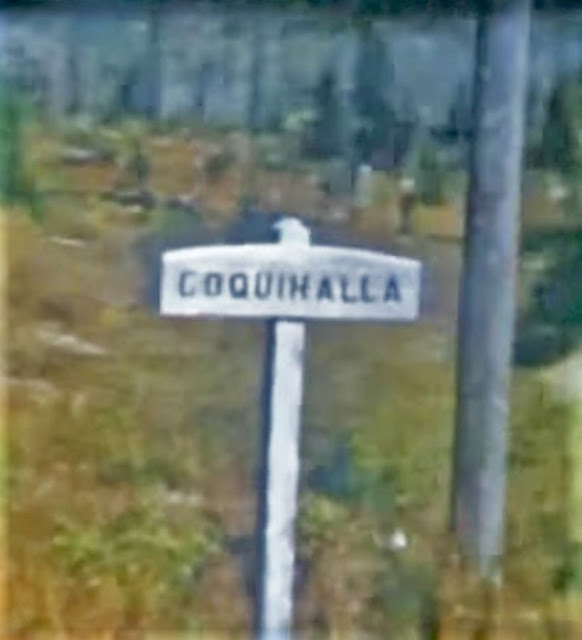 We first fabricated some HO scale Mileboards in wood and card-stock which were quite presentable.  The board itself was printed on card-stock using the Arial Narrow font at 8 point. The arc describing the top of the Board was inserted using "shapes" and bending the arc until close enough to the eye.  The sign was cut out and glued to a scale 6" square wood post painted white. The creosote black bottom was simulated with Grimy Black paint.

These models lasted a few years but were often snagged and bent out of shape or broken.  We resolved to one day make new ones that were more robust.  That day arrived a few months ago and brass was the chosen material.  Here they are: Top row are brass; Bottom row are the wood and card-stock versions. 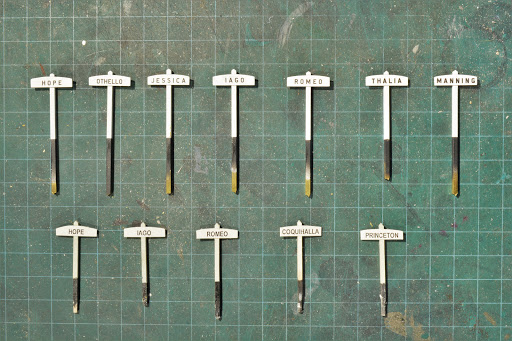 Unfortunately, the progress shots of these did not turn out well so here is a finished Mileboard contained in the jig to illustrate how the boards were secured for soldering.  In this case grooves were cut into a piece of plywood but a similar jig could be fabricated with wood strips instead of grooves. 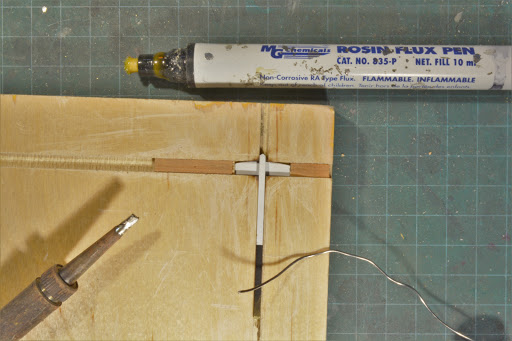 Finally, here is a shot of an eastbound extra passing the west Mileboard for Coquihalla Station on a Kettle Valley Model Railway.  The engineman would at this time sound a long blast on his whistle to advise the Coquihalla Operator of his approach.

This is a most interesting detail to add to the right-of-way on our model railroads.  On our layout, we place it about a "smile" from the station. 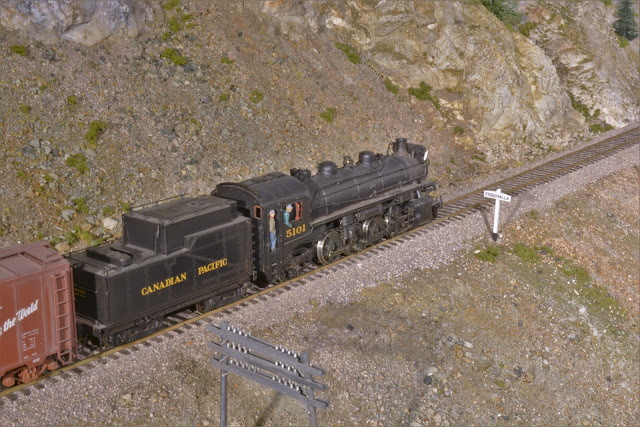 Whistleposts and Flanger signs are in progress.  So, more to come next month.