BROOKMERE: TRANSITION TO THE DIESEL YEARS

With the coming of the diesels in 1953, Brookmere's physical plant continued to undergo development.  New diesel fuel facilities were built so that for a few years both steam and diesel structures were standing together.  But the steamers were fast disappearing once the process had begun.  The changeover in locomotive power was accomplished in most of one year: 1953.  Some of the steam locomotive facilities were removed after only being installed a few years before.  By the mid 50's the Bunker "C" service tank and standpipe were gone as was the huge unloading shed.  The ashpit was filled in and its service track removed about 1950.  The  sandhouse and coaling plant came down in 1960 according to Joe Smuin's book.  Thankfully, the picturesque water tank remained.  The not -so-picturesque Bunker "C" Oil Tank also remained and both stand to this day.

We provide here an aerial photograph from the diesel era when Brookmere yard and engine facilities were not seeing much use at all.  Nevertheless it is a good reference along with the drawings.  Note the absence of the Bunker "C" Oil Unloading Shed which stood for only a short time.  The track serving it has been shortened and converted to a diesel fuel service track which was connected to the new diesel fuel storage tank.  This latter tank is situated at right angle to the track and was painted silver. 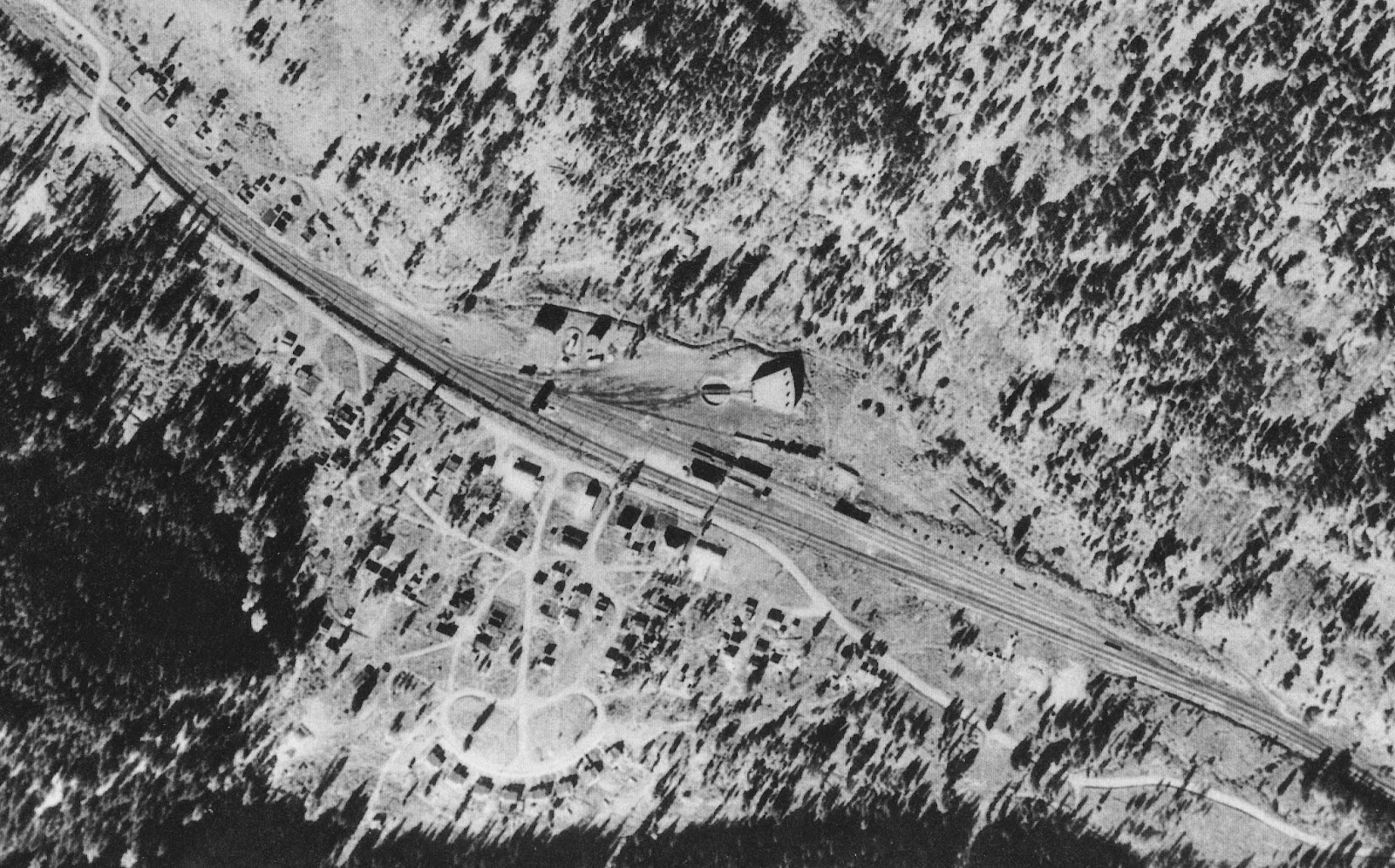 This photo should be compared with the drawing below which shows the railyard as it was after the installation of the Diesel fuel facilities. The long shadows make it a little difficult at first to interpret.  Still standing are the Water Tower, Enginemen's Bunkhouse, the Bunker "C" oil tank, diesel fuel storage tank surrounded by the berm, Engine House and Turntable, Depot, Houses (including those for staff of Trans Mountain Pipeline) and School.  A few cars sit on the service track near the Engine House and 6 more in the yard.  Perhaps it is a lonely caboose that sits at the east end of the yard. 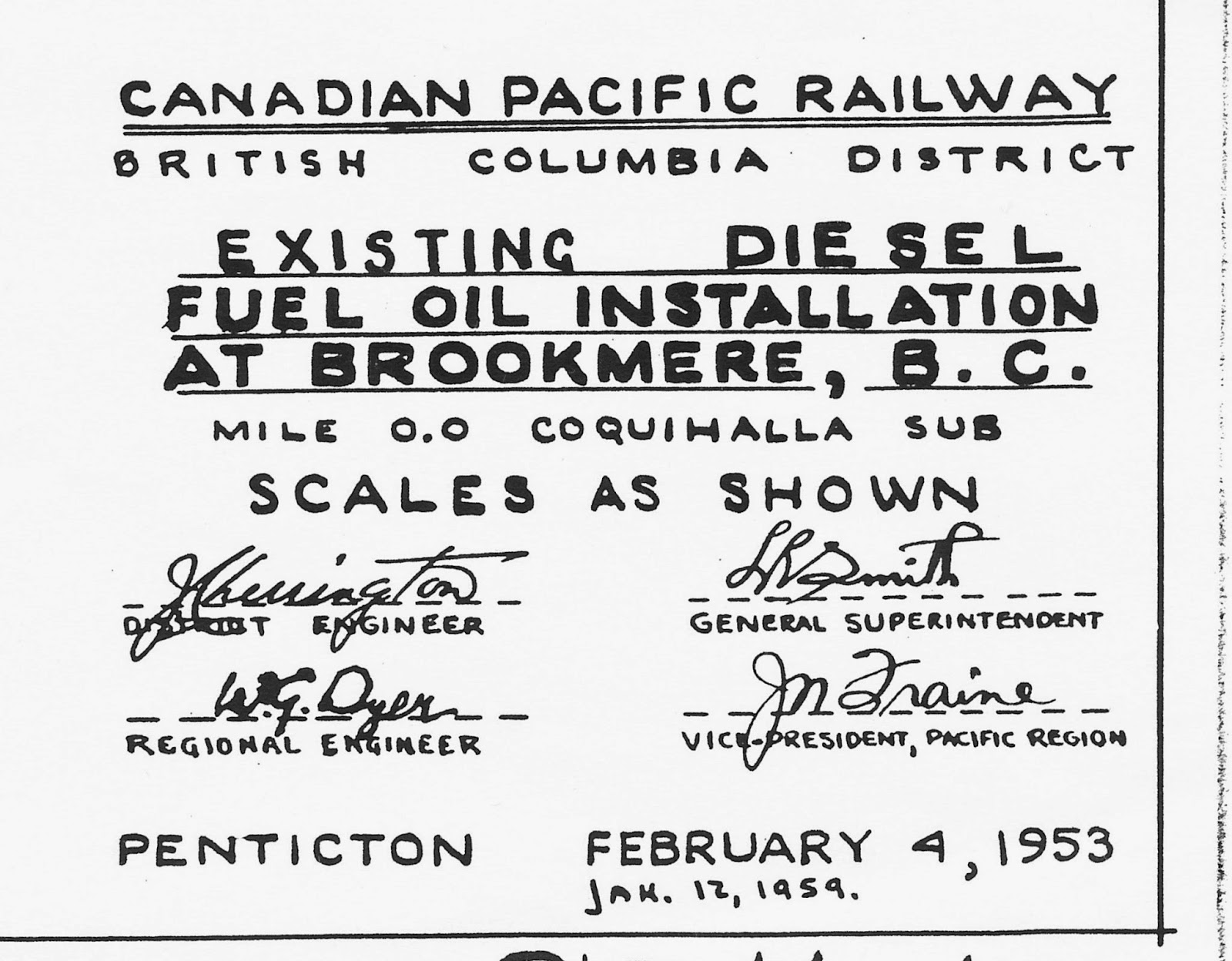 Here is the title block for a plan originally drawn up on February 4, 1953 and revised to show the "Existing Diesel Fuel Oil Installation" as of January 12, 1959.  Note the slightly different hand of the word "Existing" that suggests that it has been inserted after an erasure of the word "Proposed" along with possible corrections to the drawing itself to more accurately reflect what was eventually built.  The drawing itself is presented below in two parts.  The first part is the plan view with specifications. 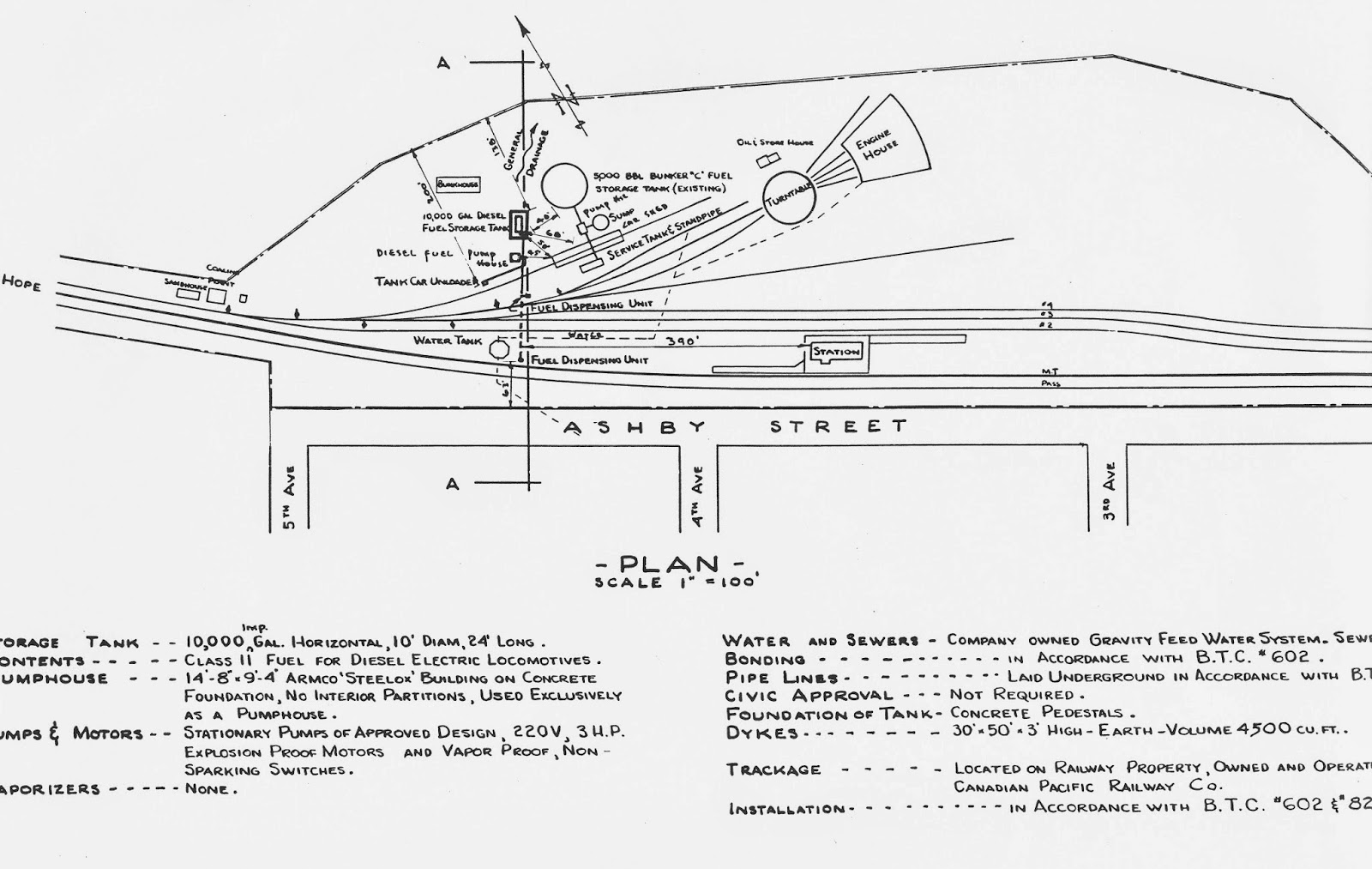 This part of the drawing is an elevation or section at A-A, showing details of the installation.  Very helpful for modelers.  The Unloader and Dispenser can be seen in one of the coloured photos below.

Here are a two low level aerials from a later time; perhaps the late 60's as the Engine House still stands.  The Trans Mountain houses with their families are gone but the other residents soldier on.  Looking West, only the main track and passing track are bare.  The snow covered yard tracks show little sign of life.  Is that a box car on the right? 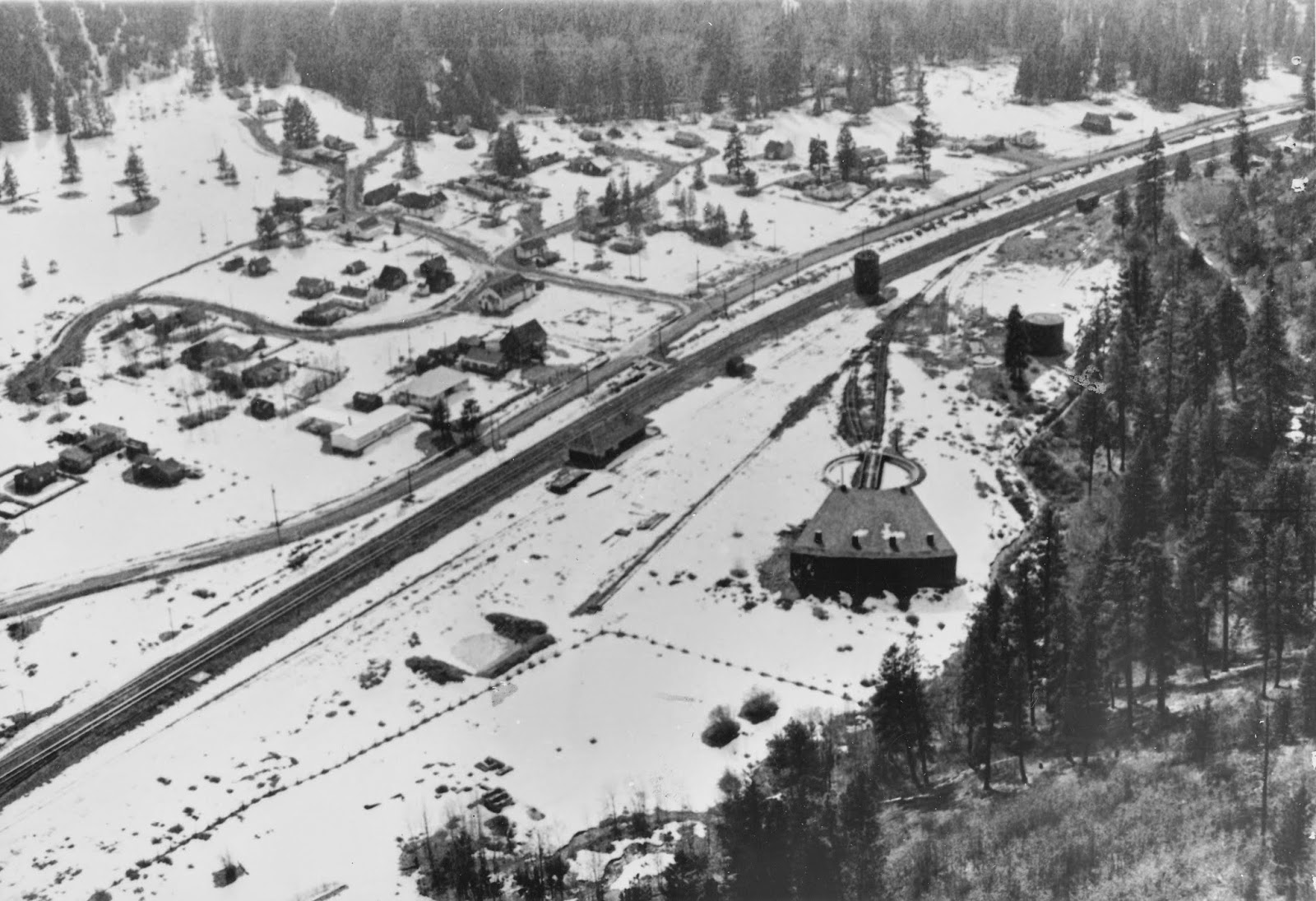 Looking East, the topography is evident. 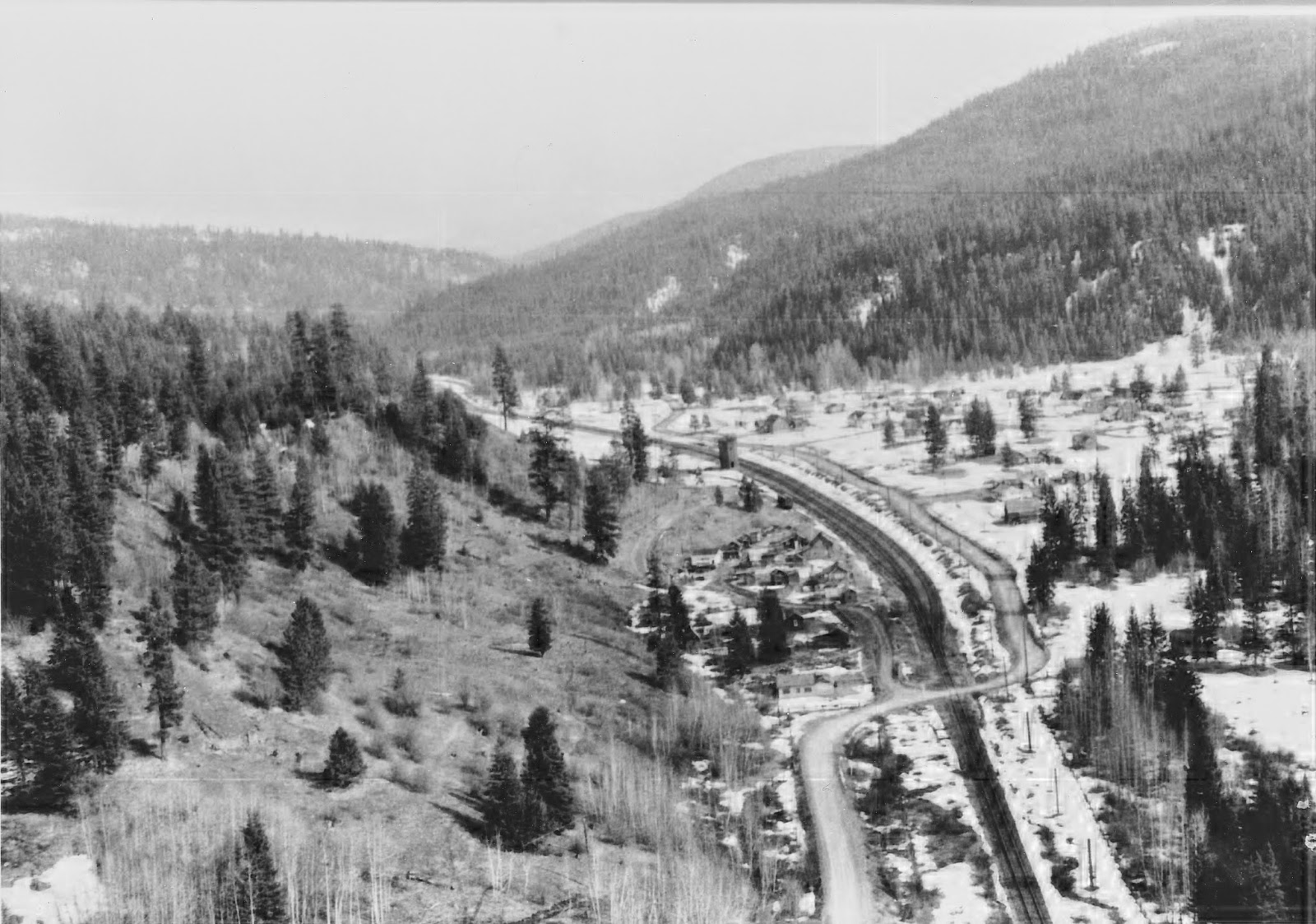 Three photographs follow which were obtained from my friend, the late Glenn Lawrence who visited Brookmere in the fall of 1968 under a very blue sky.  This trip was his second, the first being in 1954 when he took a few shots of the yard in black and white.   This time he took a lot more and in colour.  My copies were printed from slides by London Drugs and the colours are decidedly on the blue part of the spectrum.
Here we are looking west from under the eaves of the Depot and all visible structures are no longer in use.  From right to left we see the Engineman's Bunkhouse, the pumphouse and stands for the diesel fuel service, and the Water Tower.  Missing is the Diesel Fuel Storage Tank.  Just out of sight to the right would be the large Storage Tank for the Bunker "C" oil which is still standing today. 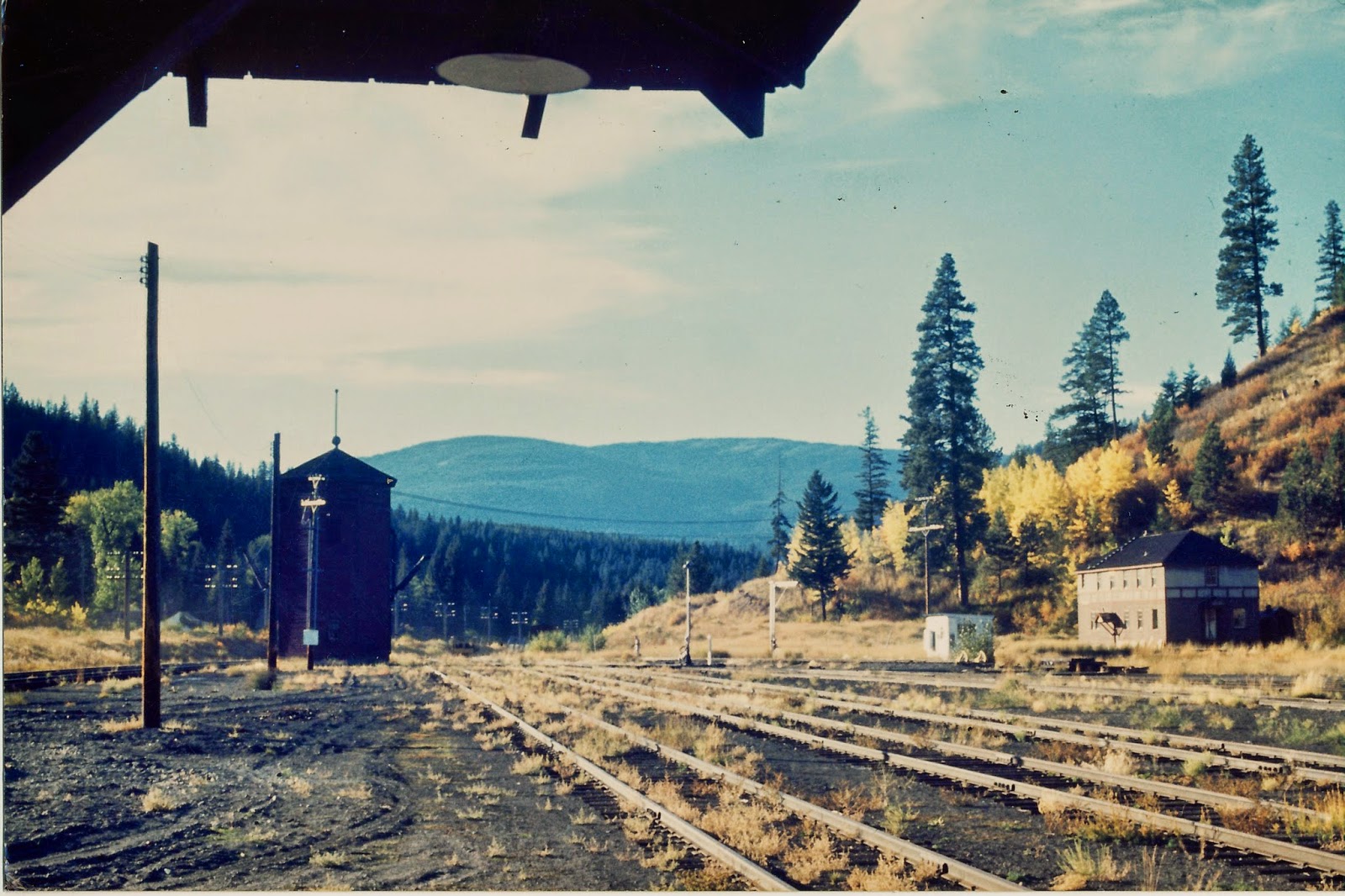 Looking East, we see the Engine House, the Depot, and south of the water tower, the front of the "new" school.  Note that several switches have been removed leaving only the one yard track on the north side of the depot in service and one lead to the turntable.  They would soon be lifted along with the rest of the yard and service tracks. 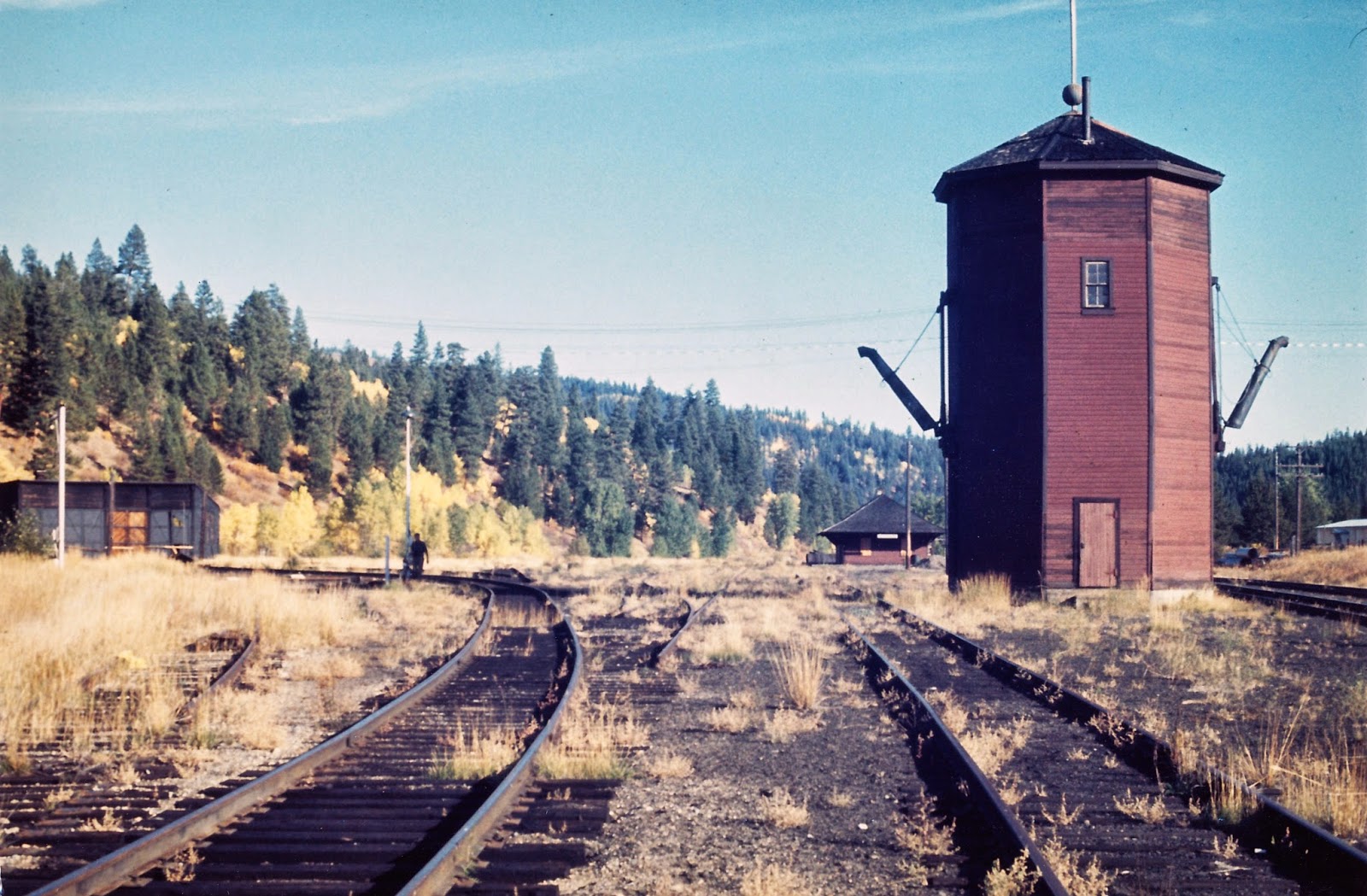 A third shot by Glenn shows us the Engine House and Turntable.  Fortunately, Glenn took many more photos that day which provide great detail for us modelers and these we will post eventually when we treat of the individual structures of Brookmere. 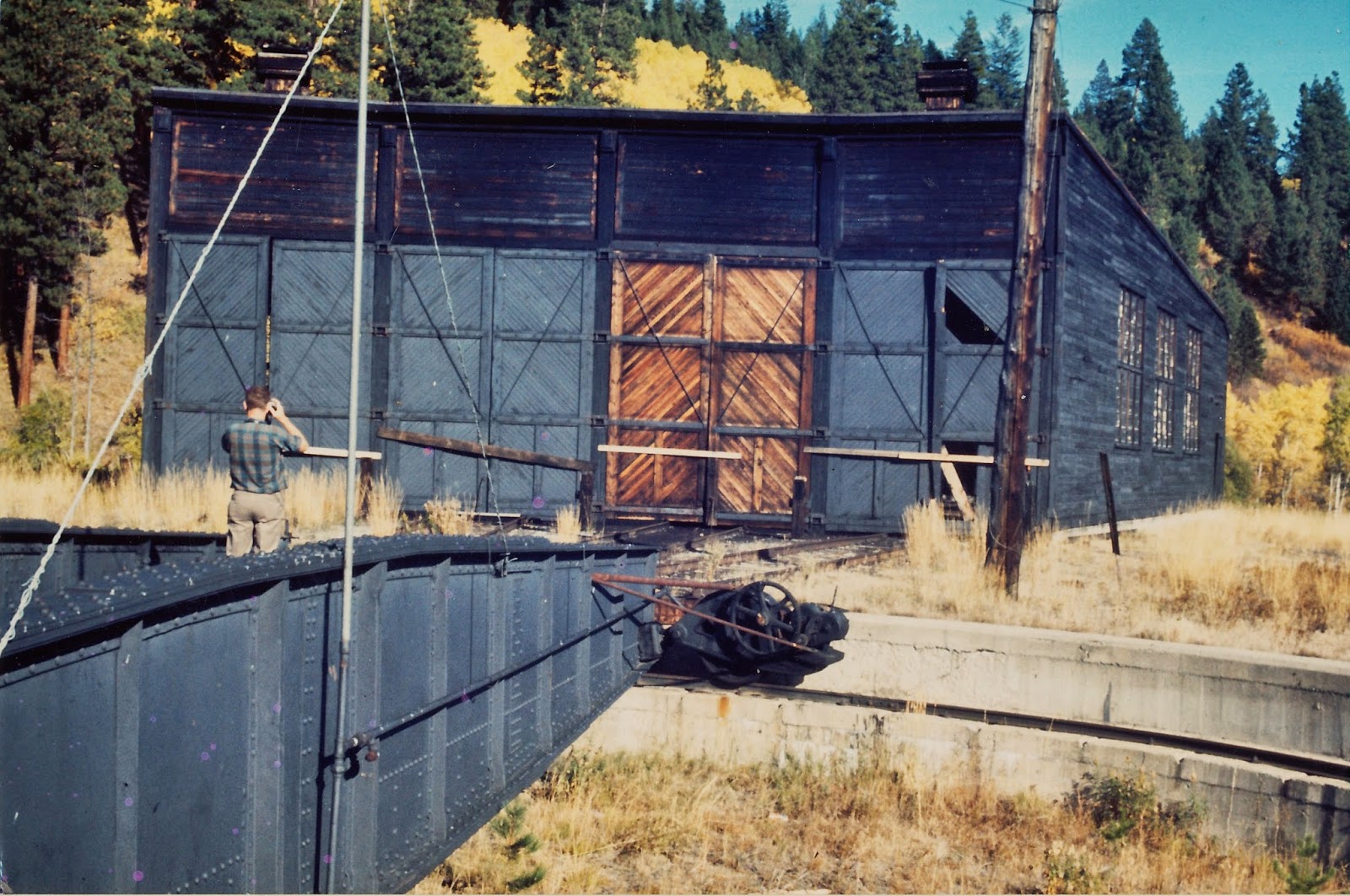 I have been exceptionally busy with work since I unretired last November and went to work at the Vancouver airport (YVR) working much overtime and Saturdays as well.  Now that is finished and I am out of "recovery".  But, I do have more work in February.  Hopefully, I can get some work done on the layout and tell you about it.   Until next time.