There was a cluster of buildings at the Coquihalla summit for the various section men and other railway workers plus a family or two.  These included the water tower, the station shelter, the section foreman's house, a standard bunkhouse, a double tool house and three cottages.  In addition there were other dwellings below the grade on the geographical east side.  On the west side of the track there was a fishing lodge comprised of a main building and 5 cabins.  This photograph of our model shows the layout of the cluster near the water tower.  There are a number of major and minor details missing from the model structures but all of the originals are represented here with only moderate linear compression. 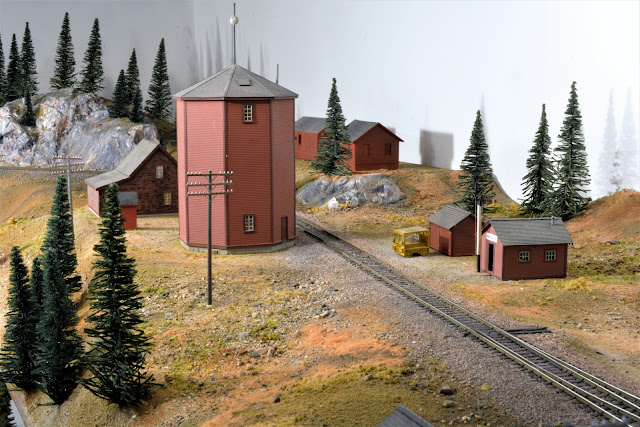 The above photo can be compared with the following crop from the plan of the west end of the siding.  Basic measurements follow for the benefit of modelers who cannot discern the measurements on the plan. 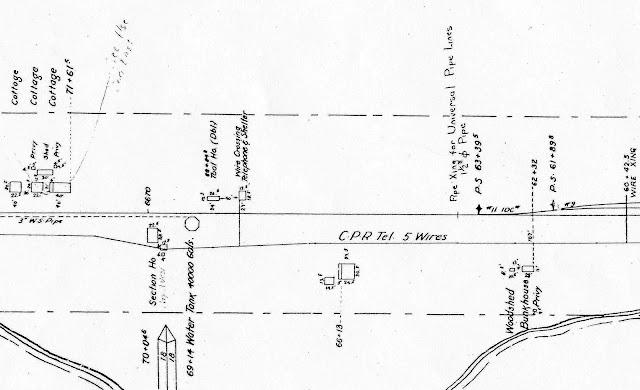 In this 1955 plan, the shelter or operator shack is on the opposite side of the track from the water tank whereas in earlier drawings (see previous post) it was situated on the same side.  The telephone wire drop to the shelter is shown at right angles to the pole line.
The shelter had a train order signal which in earlier days was on a wooden bracket affixed directly to the front wall.  In later years the signal was mounted on a post. A train Order Operator was stationed there only intermittently but especialy in the winter to assist in the movement of plow and other work trains.  When the Operator was not needed, the boards were covered up or the blades were removed.  Sometimes the station was designated as having a regular operator with the Employee Timetable showing the letter "Q" listed next to the station name as in this excerpt from the 1954 Timetable.

The other numbers and letters in this crop from a Timetable are: 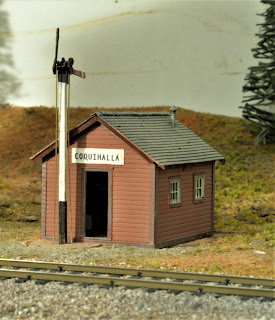 During operating sessions on the Kettle Valley Model Railway, an Operator is regularly "stationed" at Coquihalla with access to working train order boards.


A very good photo of the prototype shelter and its physical context is found in the Morning Sun book: Canadian Pacific Steam in Color on page 123.  Unfortunately we cannot reproduce it here but will comment on some interesting details to be noted.  This photo, in wonderful colour, shows that the winter snow is in retreat with locals in shirtsleeves and the right of way quite bare.  The Train Order board is down for the westbound passenger train just as our miniature version displays in this shot of the model.  The original photographer was shooting from the rear of  No. 11 on May 5, 1953 as it passed the shelter.  A train order Hoop is lying on the ground and the Operator is about to retrieve it after "hooping up an order on the fly" to the passing train crew.  Local youths are assisting the Operator with items that seem to have been unloaded recently from one of the trains.  A bed spring rests against the shelter wall.  A platform is built onto the roof for the benefit of the signal maintainer for his weekly refilling of the kerosene lamp of the train order board.  Close by on the shelter are nine 45 gallon drums and an electrical cable spool.  The fishing lodge is seen in the background showing detail that will be helpful in modeling them.

Another photo on the same page of the Canadian Pacific Steam book was taken moments before and it shows the head end of the Eastbound, No 12, in full view on the main track.  On the point is the road engine, a class P1n Mikado locomotive, No. 5261, which is assisted by the pusher cut in behind.  This engine is identified in the caption as 3639.  Besides the minimum 5 coaches in the consist, there are five PMS boxcars and one refrigerator car all of which together absolutely required the assisting engine on the Coquihalla grades.

This series of posts is a direct response to a reader for information as an aid to building a set of Free-mo modules depicting the Coquihalla station on the KVR.  http://www.free-mo.org/standard

In the next post we will present a few historic photos of the buildings for all modelers and railfans.  Eventually we will offer some plans for the standard buildings which were located at stations all over the Kettle Valley Railway including Coquihalla Station.  In the meantime here is an interesting film of life at the summit in 1946.  https://www.youtube.com/watch?v=gw85LKz6dQo