Otter Summit arose as a settlement a few years prior to the First World War.  Its name was officially changed to Brookmere in 1915.  Kettle Valley Railway tracks had reached this location from the west in 1911.  From the east, tracks were laid by the Vancouver Victoria and Eastern Railway and Navigation Company (V V&E, a Great Northern Railway subsidiary) and the rails joined in October, 1914.  It became a Division Point for the Kettle Valley Railway some time after the establishment of regular freight and passenger service.  Engine terminal facilities were built and housing for the operating and maintenance staff as well.  Private houses followed most of which changed hands many times over the years as railway employees came and went.
Brookmere came into being because of the railway, eventually acquiring in addition to the railway facilities, a hotel, a community centre, a school and a store with a gas pump.  In steam days it was a busy place.  In the early '50's, Trans Mountain Pipelines built homes for maintenance staff and supplied them with electricity from a generator.  With dieselization in 1953, CPR train crews were greatly reduced and after  a few more years Trans Mountain pulled out, all the homes being removed and the staff relocated.  Through trains on the Division were abolished in 1961 and the railway business further declined.  Local section crews were also reduced.  With the closure of the railway agency in 1966, only a few Kettle Valley veterans continued to reside there as retirees.  And so the town's permanent population dwindled to a hardy few.  But, with the Coquihalla highway providing easy access to civilization, summer and winter recreation in the area became increasingly popular and the village acquired a number of seasonal residents and other retirees as well. 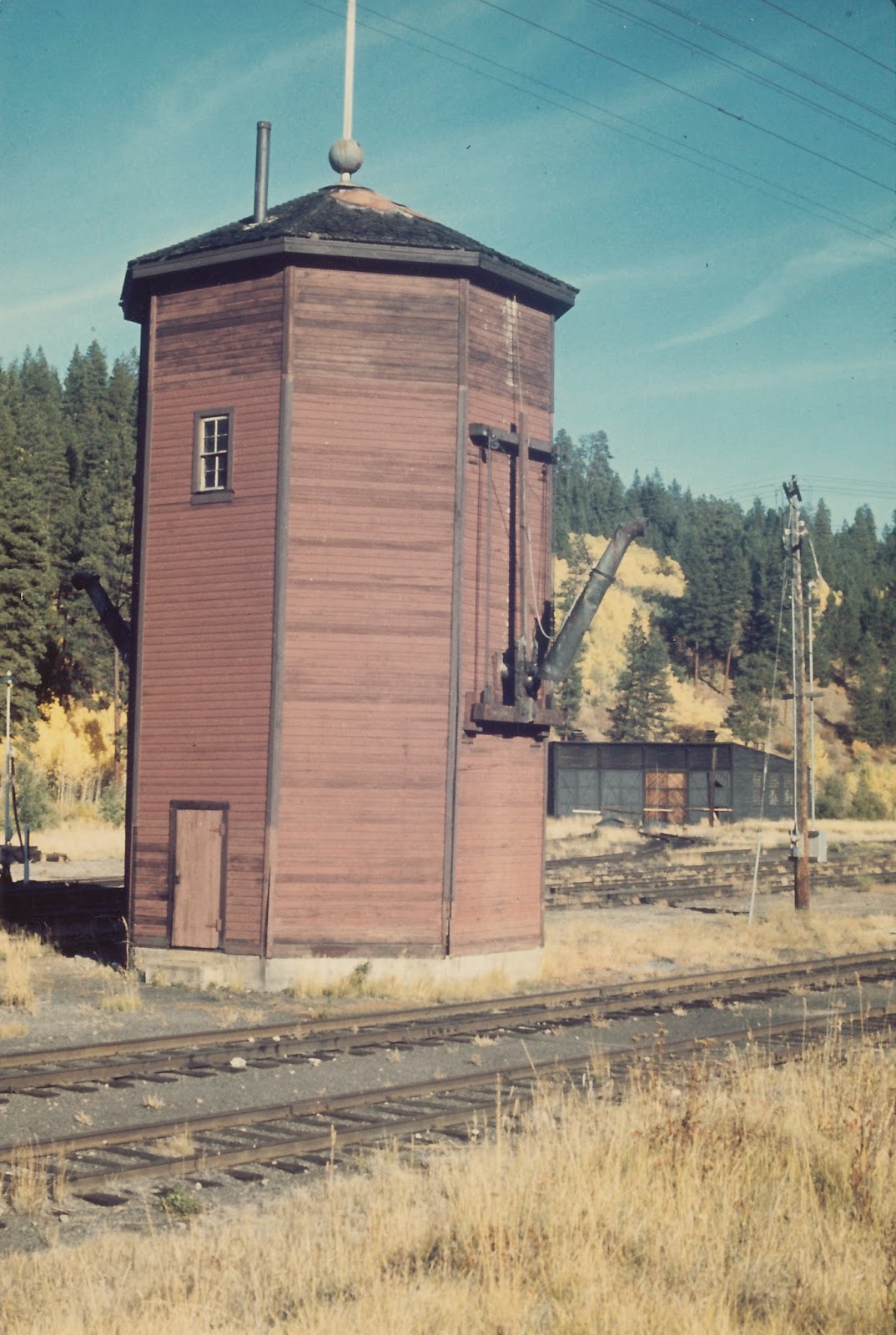 Our post today presents several track plans with photos to show Brookmere through the earlier railway years.  The drawings were acquired from the CPR Engineering department in Vancouver very shortly before it shipped out its copious filing drawers full of plans old and new to a basement somewhere east of the Rockies.
Brookmere is a peaceful place with a few surviving relics of the town's railway past, chief of which is the old water tower.  This is quite appropriate in that the water tower would have been one of the first permanent structures erected in the town.  Just about every traveler passing by takes a photograph of it.  Joe Smuin in his book, KETTLE VALLEY RAILWAY MILEBOARDS, states that the water tower was built in "late 1914 or early 1915 and rebuilt in 1945".  So, it could be officially classified as an antique, being 100 years old.  Or is this a case of the proverbial hammer whose head has been replaced a couple of times and the handle several more.  This photo was taken in the 1960's by my friend, Glenn Lawrence.

Our first plan is a copy of an original by the V.V.&E.  Unfortunately , the title block is missing but I would suggest that the drawing dates from 1915 or shortly thereafter as the station is named "Brookmere" with Otter Summit in brackets.  It shows the KVR track in a bold line from the left and the V.V.&E. track coming in from the east or right as a finer line.  Note the "V.V.&E. Jct" label where the two lines connect on both the plan view and the profile.  The lot 659 is/was owned by L. H. Brooks who gave his name to the station.  He was the original homesteading pioneer in this area.  The water tower is denoted by the dot near the junction switch and the first "depot" which was a KVR structure.  Naturally, it faces the KVR track.  According to Smuin, it burned in 1917, being replaced by a new station building that lasted until 1986 when it also burned.  The KVR track ends right at the property lot line.  As yet there is no yard trackage, nor engine house but the turntable is in so that engines could be turned for the return trip to Merritt and points west.  The Great Northern style of signifying headblocks (the long switch ties on which switch stands were mounted) is with a round dot in contrast to the CPR style which used a diamond symbol.  The letters "H.B." also designate the headblocks.  The circle with the number 241 designates the VV&E mileage from Marcus in Washington state (Smuin p. 2-30).  On the grade profile on the lower left of the page will be seen the crest of the grades from east (-1.1%) and west (+1.0%).  This short stretch of track in front of and to the west of the depot is the only level track for many miles in both directions.  Of interest is the stream that divides into Otter Creek to flow east toward Otter Lake at Tulameen and Summit Creek to flow west to the Coldwater River.  The westward flow was later called both Pass Creek and Brooks Creek.  From it a 3" wood pipe fed the railway's water tank and town's residences.  The curve approaching the station from the west has a curvature of 2 degrees. 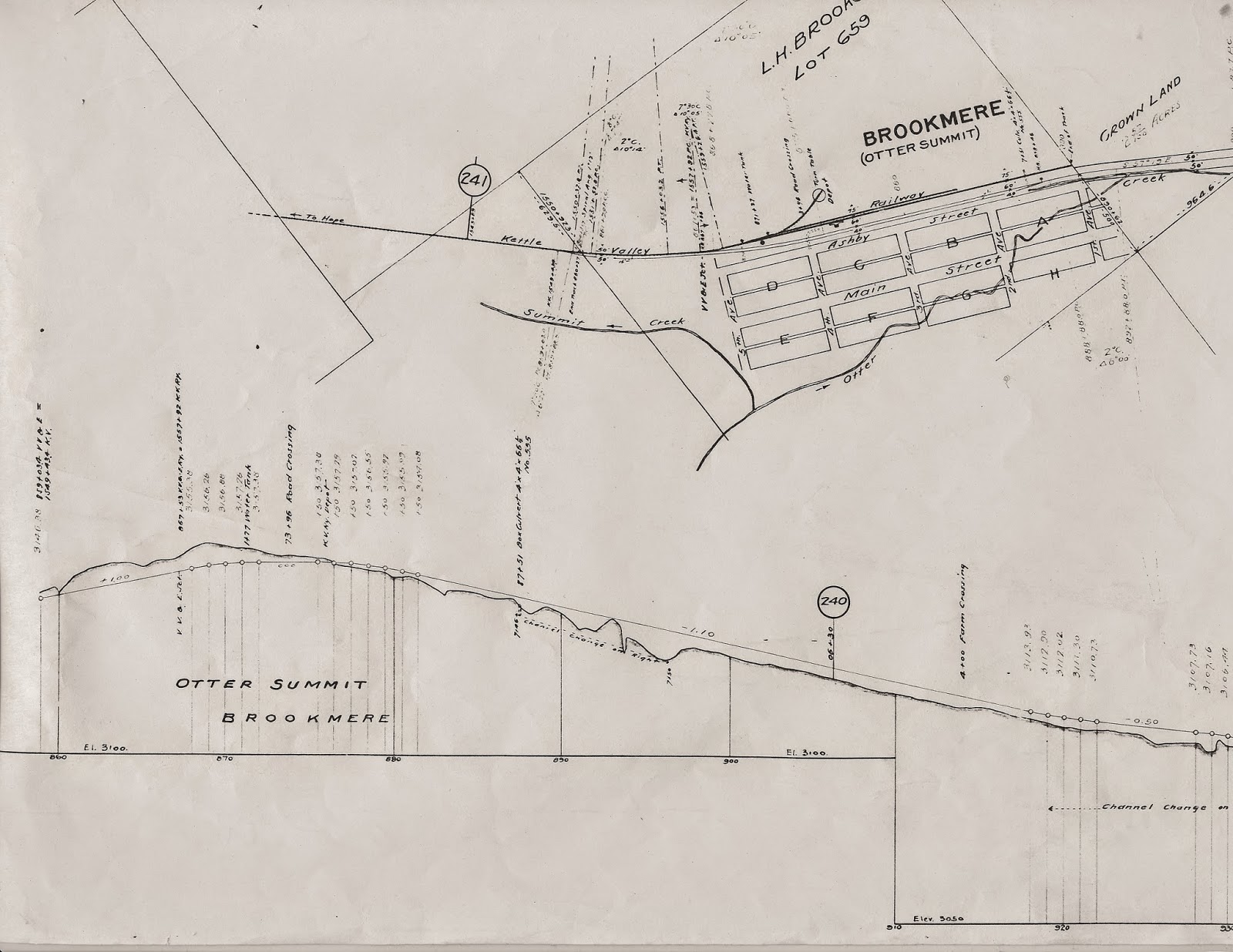 The next drawing was done by the CPR and dates from 1933 with emendations to 1943.  We must present it in three parts to provide enough detail.  I was told by a veteran that the single ended yard track 3 was elevated but cannot really understand why unless it was built level as the rest of the trackage sloped eastward.  Because of the yard sloping at both ends, derails were required to keep rolling stock from rolling away.  Two are noted on the plan.
This brings up a story to illustrate how important derails can be.  A gentleman who worked as a hostler in Brookmere, told me that one very dark night in 1950, a freight crew was performing terminal switching in the yard.  Unfortunately, they left three freight cars standing in the path of the hostler who was moving an engine in the darkness to the water tower (I can attest to how dark Brookmere can be in the wee hours).  On the night in question he ran into those three parked freight cars sending two of them careening down the four mile grade to Brodie where they jumped the tracks on the sharp curve near the section house.  The section foreman had been alerted to throw the junction switch to keep them from going further on the main line.  The young hostler quit his employ soon after the investigation. 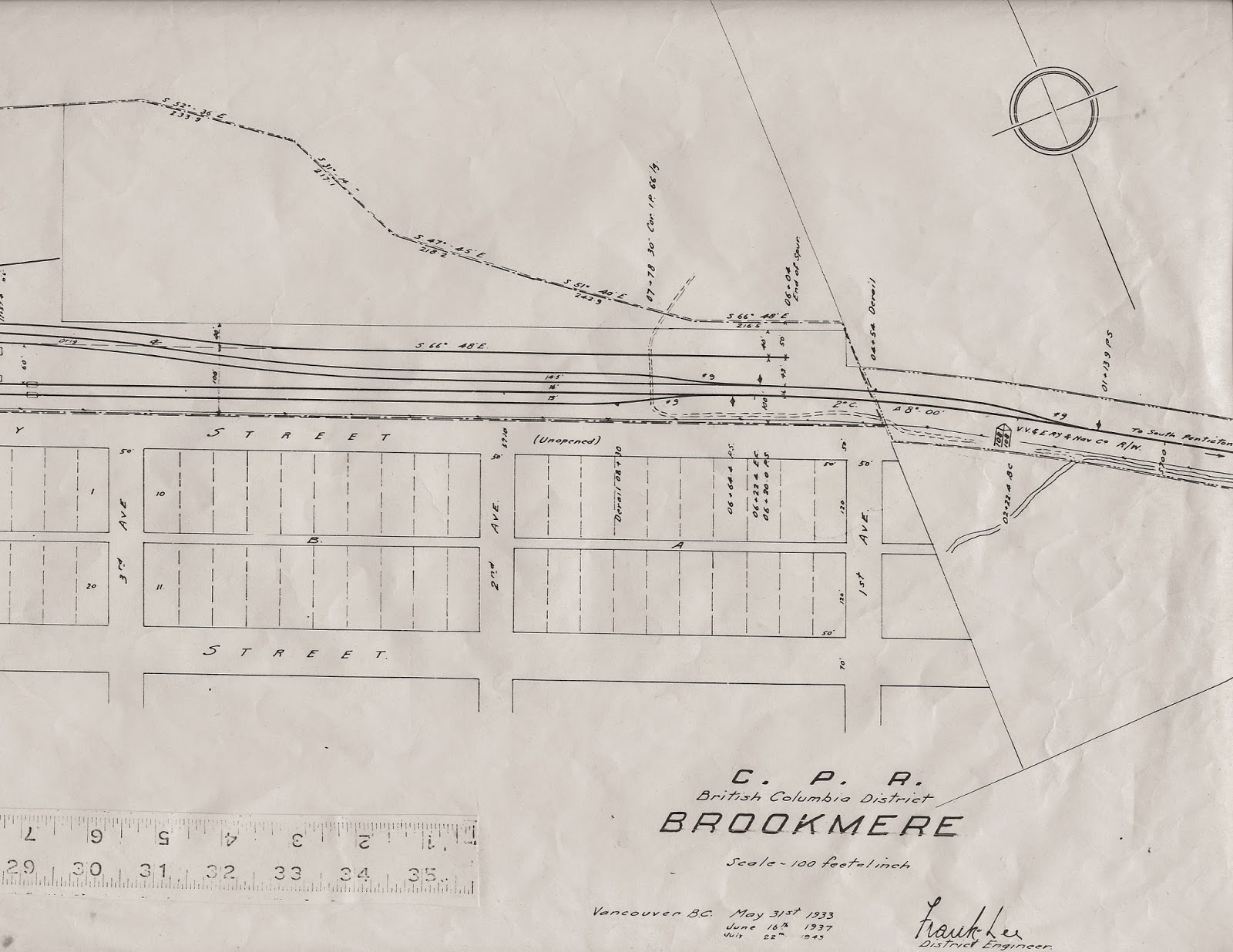 Here is the west end of the yard in 1933-43.  This trackage was changed soon after 1943 to extend the yard tracks and the yard lead.  The 1944-49 plan will be presented in the next post.  The curvature on the mailine west of the station is now 1 degree, 30 minutes.  That is greater than a 45 foot radius in HO scale. 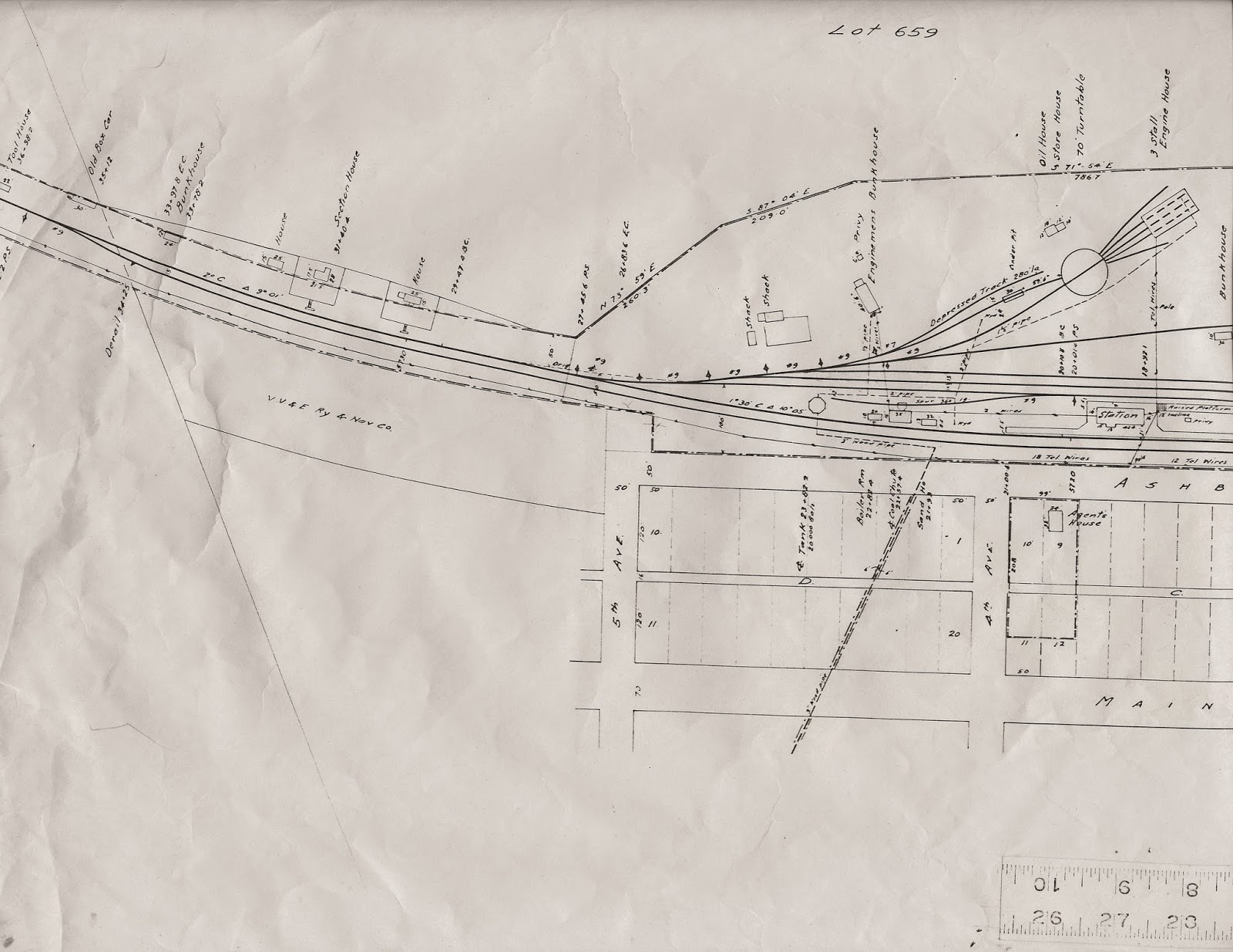 Here is an enlargment of the heart of the plan for clarity.  From this one should be able to discern the dimensions of buildings and spacing of tracks among other things.  Note the three stall Enginehouse and the location of the Coal Chute and Sand House on the main track.  To the west of the Coal Chute is the Boiler Room which powered the bucket hoist for the coal. 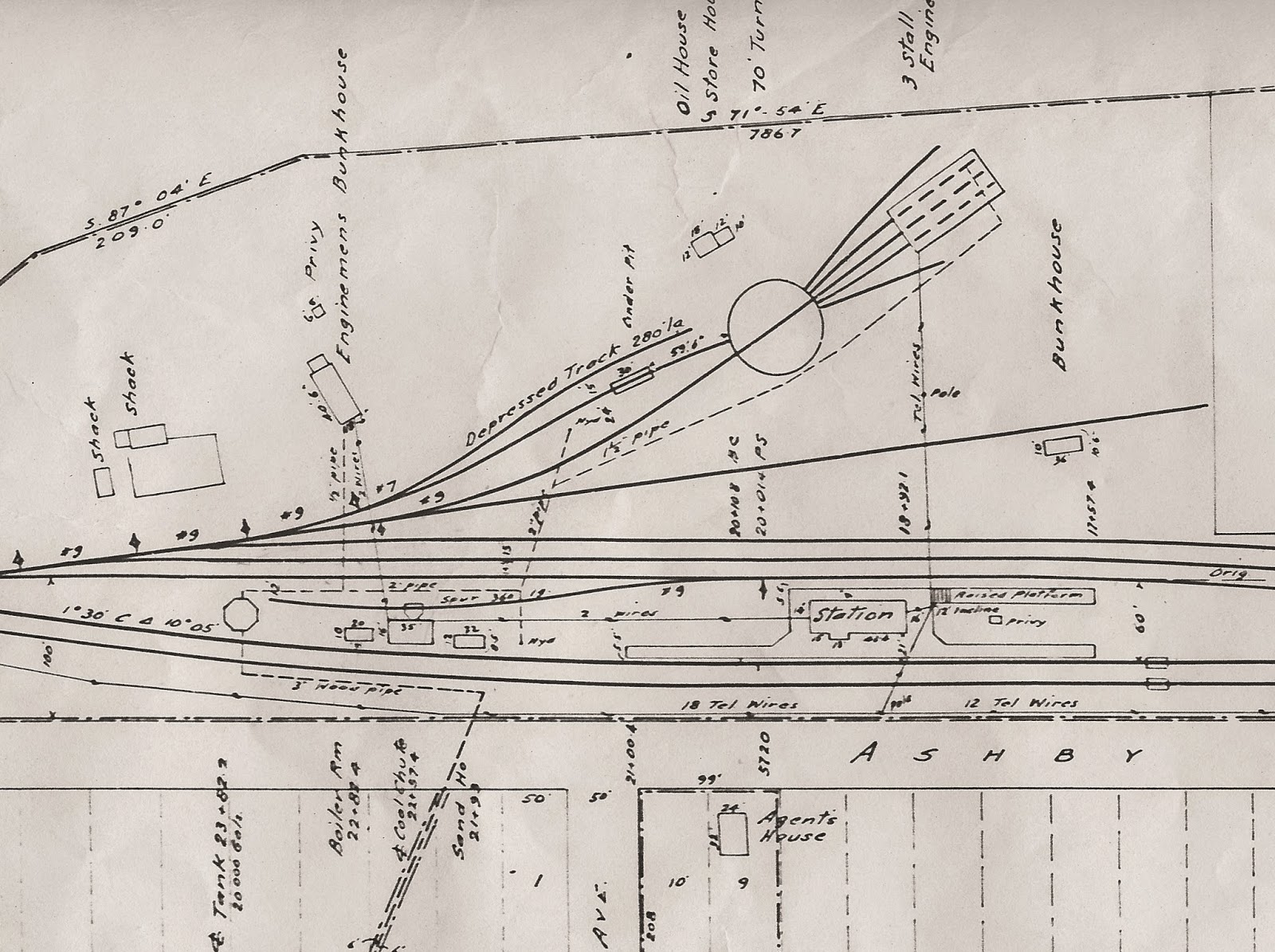 The service track for the coal and sand was slightly elevated as can be seen in the following photograph which dates from the 20's.  The yard tracks in the picture appear to be of a different alignment than the drawing of five or ten years later.  The sawmill in the foreground burned in 1925 according to Smuin.  There are some concrete foundations in this area today which could well be those of the mill.  Photographer unknown. 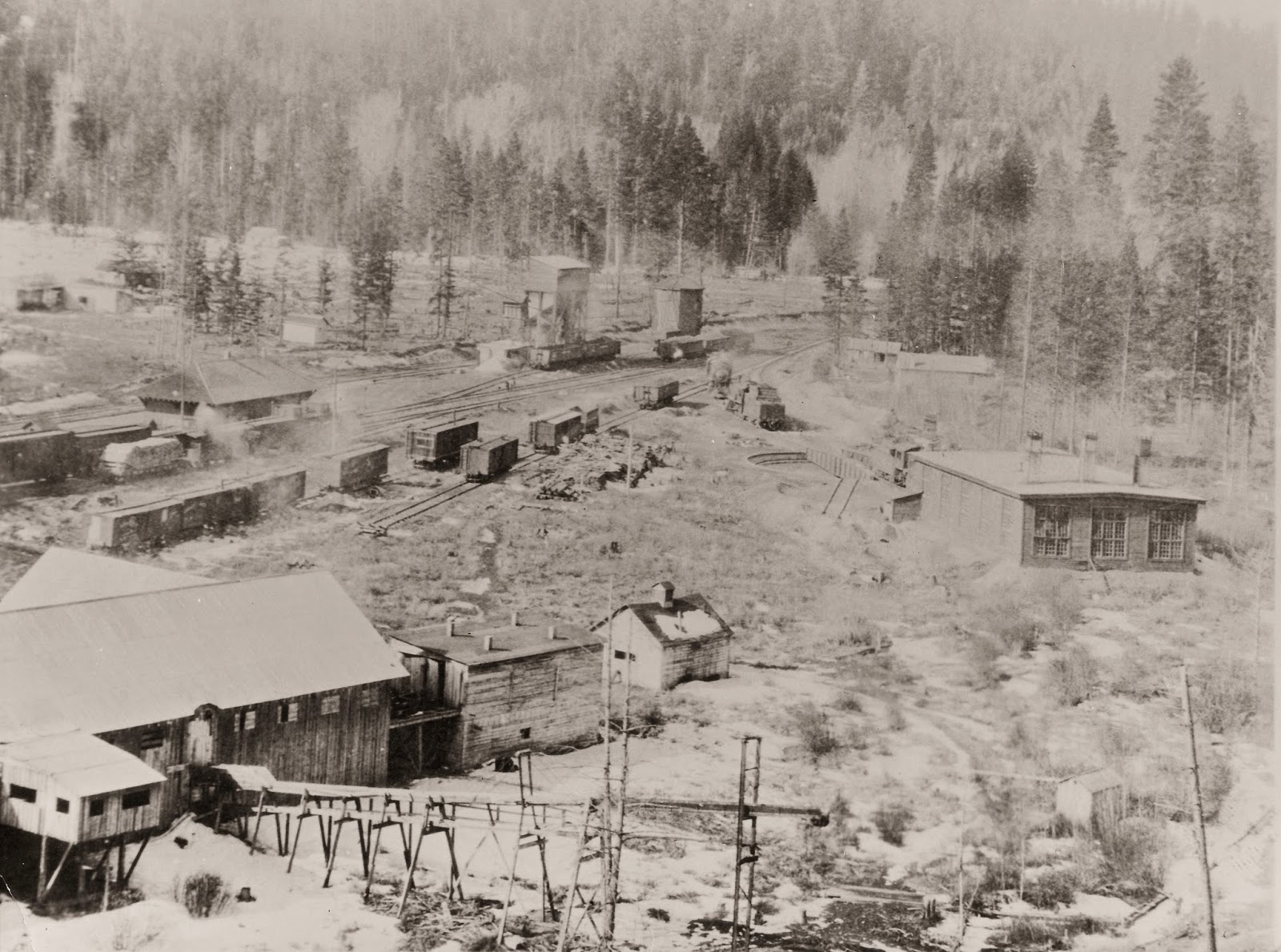 From the archives of the Okanagan Archive Trust Society, here is a shot of the Brookmere enginehouse.  The photographer is standing next to the Station building to his left.  The old freight cars have been made into crews quarters.  Taken about 1932, this is file No. KVR092 of the OATS  collection.  Photographer unknown.

Another shot from the Okanagan Archive Trust Society, being KVR 158.  It was taken by Bill Presley in 1935 and shows the Eastbound Kettle Valley Express train No. 12 waiting at the station.  The coal chute and sand house are in the background and located to serve engines on the main line as the drawings show.  They were later removed and a new coal chute built near the yard lead as will be seen in our next post on Brookmere in later steam years. 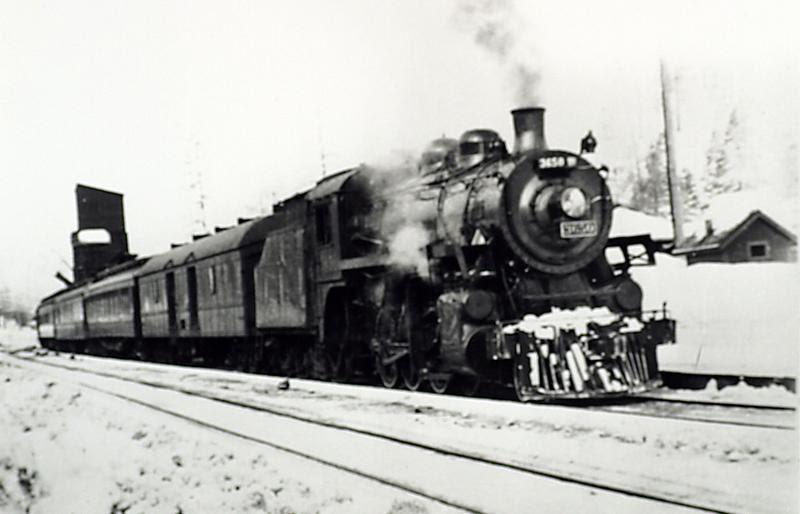