MILL GONDOLAS ON THE KETTLE VALLEY

Canadian Pacific's Gondolas went through significant evolution over the years from the typical, early wood construction with some steel components to the later all-steel versions.  One interesting Gondola Car had steel centre sills and frame, a wood deck and wood sides flanked by wood posts set into stake pockets.  They were listed in the CPR's SUMMARY OF EQUIPMENT or M.P. 14 as "Gondola, Stone", or "Gondola, Stone Sides".  Commonly called "Stone Cars".  They were basically flat cars with removable, planked sides.  Strictly speaking, not a Mill Gon but an early precursor.  Here is a drawing of one. Click on the photo for enlargement.

Nor West models produced a kit for this car some years ago but it is now out of production.  BGR models acquired the molds and masters and may reissue this kit.
Riddell's Canadian Pacific Color Guide photo of the Stone Car on page 84.  Still bearing car No. 338206 in 1970.  Riddell comments that they were used for ballast service.  I believe they were also used in cinder service.  One could be built from the Tichy Flat car kit by adding the stakes and boards in styrene.  From the photo and the drawing, one can see that the prototype had 13 stake pockets so that one of them was centered on the car.  This necessitated the steel door to be placed off centre.  My friend Len built a few from the Nor West kits and here are two of them lacking only numbers and exterior weathering. 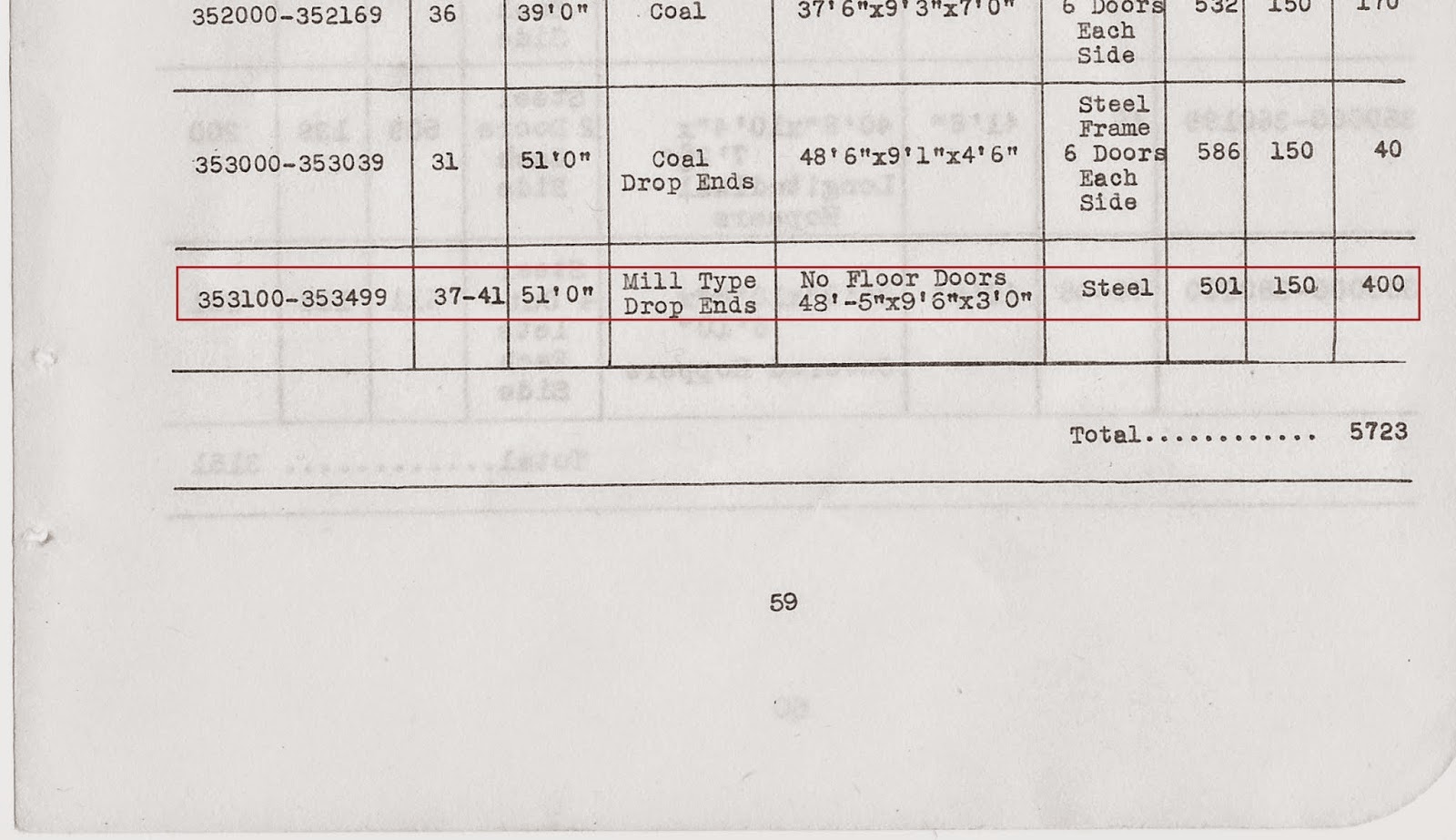 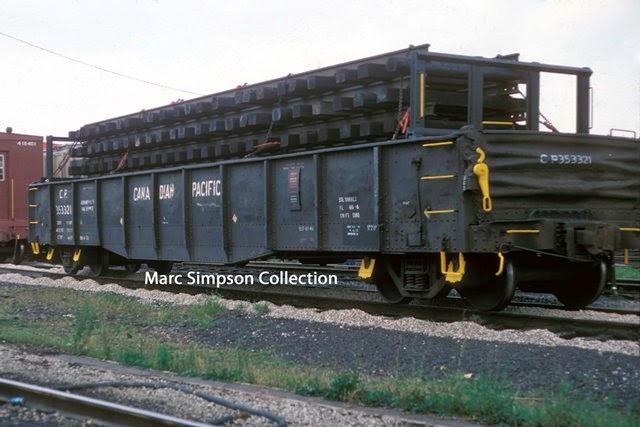 possible that they were originally built with straight side sills but later needing strengthening.  The theory is that a fishbelly reinforcement was added to these sides at a later date.
There are few photos of them but Marc Simpson Railway Photos: mlwm420@gmail.com sells this good 3/4 view of one carrying panel track sections.  Although it is in Company Service, it still carries its original number: CP 353321.  The gaudy yellow safety items were added at a much later date.  Of particular interest is the arrangement of the road name lettering.
None of these cars appear in Riddell's book.

After studying the photo and glimpses of them in other shots, I kit-bashed a few that are close enough for me and my budget.  Here is one.

This model was built from a Proto 2000 kit which were in plentiful supply at hobby shops and train shows though they are a little harder to find now.  They are fairly cheap.  It turned out that by cutting the centre panel out and reconnecting the two remaining parts, the length and width were a match for the prototype.  I cut them on my table saw with a plywood blade (80 tooth) and a very accurate sliding table - accurate in that the sliding table cuts absolutely square.  I cut a little proud of the centre of the ribs to allow for styrene melting under the action of the glue when pushing the halves back together tight to a straight edge.  A major cosmetic feature of the Canadian Gondolas is the "cut" or slope of the side sill, which sloped over only one panel instead of two which was the American practice.  To match it we must continue the level line above the trucks and then shave the sloping panel to the new angle to match.  Rivet decals could be added to the newly sloped side sill.  The main discrepancy with this kit-bash are that the ribs are "hat - section" style and they are spaced differently than the prototype which had 11 panels whereas the model has 14.  Also the interior height is only 3' - 0" and the Proto model is a bit more but this is close enough for me. The hat braces are not so delicate as the "Z - braces of the later gons.  The interior securement hoops, the positionable drop ends and the brake lever are nice features of this model and with the added details of wire grabs and stirrups, the result is a good representation.  I had a few Athearn models like this but they lacked these features, so they were sold off when these upgraded models were added to the roster.  One bonus to consider is that the Proto 2000 kits with CPR lettering can remain without modification as the car numbers are correct for this car.  The model pictured bears the stock model lettering.  The shape of the letter "C" in the reporting marks is the only deficiency in the otherwise very nice lettering. 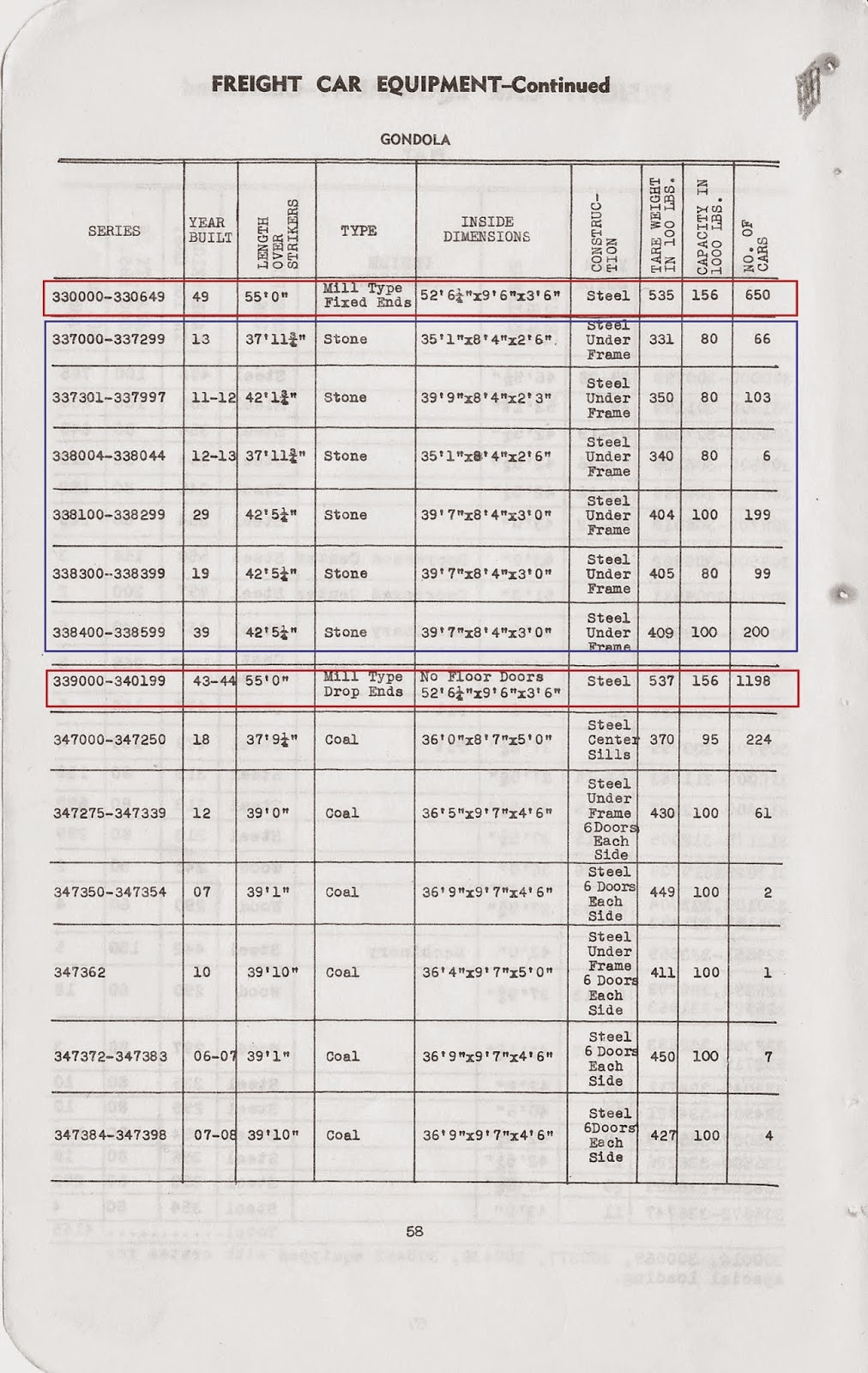 Later in the mid 1940's, the CPR managed to acquire 1200 Gondolas despite the wartime restrictions.  This batch of cars were in the series 339,000 to 340,199 and were four feet longer than the 48' - 5" car described above.  This is the car that Rapido has recently marketed.  Its "Z - brace" ribs are easily broken if handled roughly but Rapido did a fine job of a very important Canadian car which all major railways carried on their roster. They are still around in limited numbers on OCS having lived a long life despite hard service.
For our 1949 Kettle Valley layout, we kit-bashed several from the Proto 2000 kit which matches all major dimensions and details except the sides.  The ribs on the kit sides were shaved off very carefully between the end posts.  Cast resin sides by Brian Pate: http://www3.telus.net/KMR/
and a cap rail were then attached to the sides with CA glue and the usual grabs and stirrups added.  A lead weight was inserted beneath the interior floor as the steel weights supplied with the kit can be affected by uncoupling magnets.  I must admit that in the building of the models that several of these fine "Z" section ribs were broken - just like the Rapido's can be.  It is a little tedious to fix them.  But well worth it to do the model since it is an important car for the era of our chosen prototype railway.  We built these a few years ago before the Rapido model was announced.  Rapido's website: http://www.rapidotrains.com/gon.html

And a couple of interior shots I took some years ago of two different cars.  Note floor finishes.  Car Nos. unknown.  Securement hoops appear on the car on the left but not on the car on the right.  That is a ladder against the car end added more recently for accessing the interior of the car which had a service number. 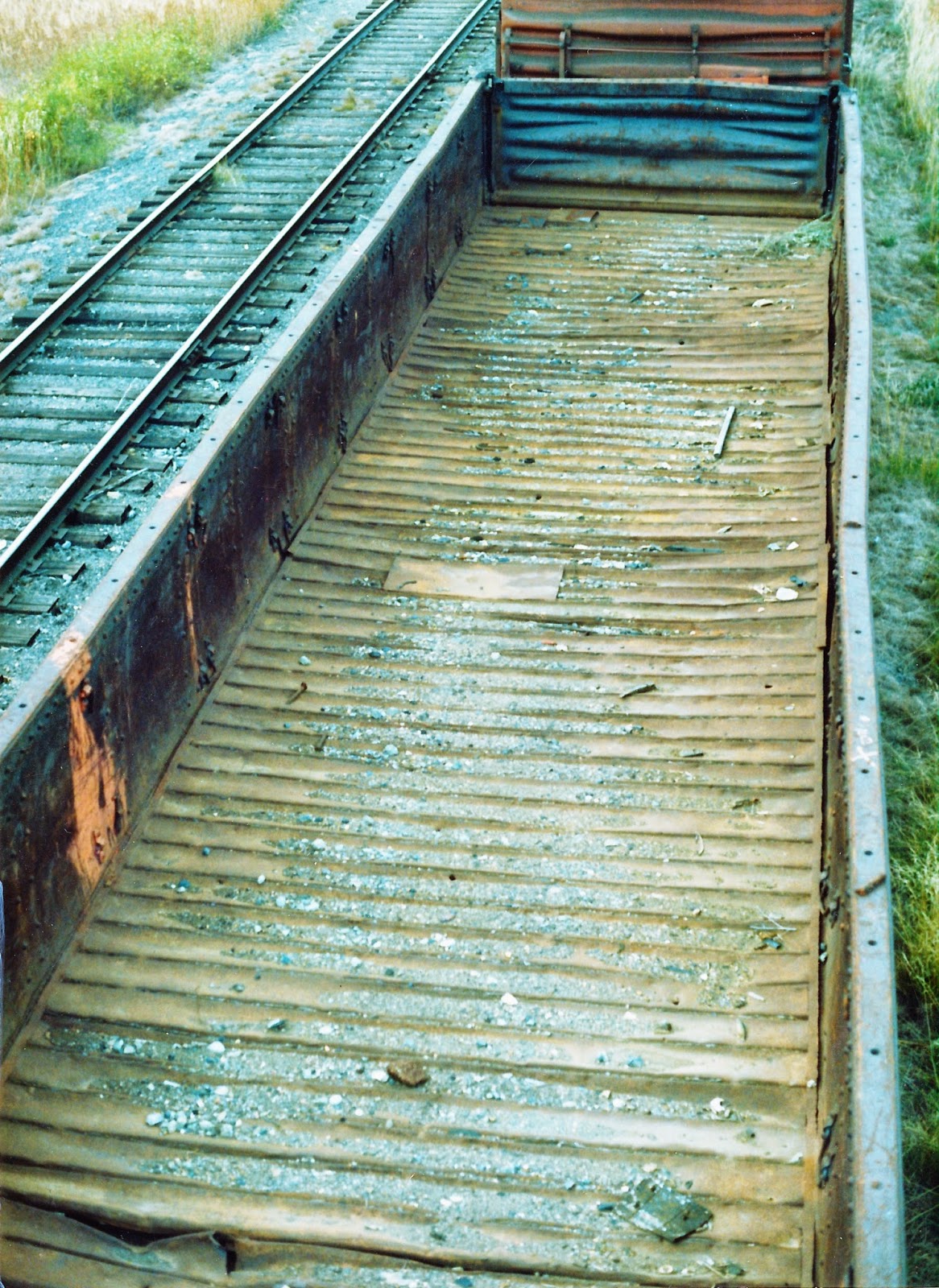 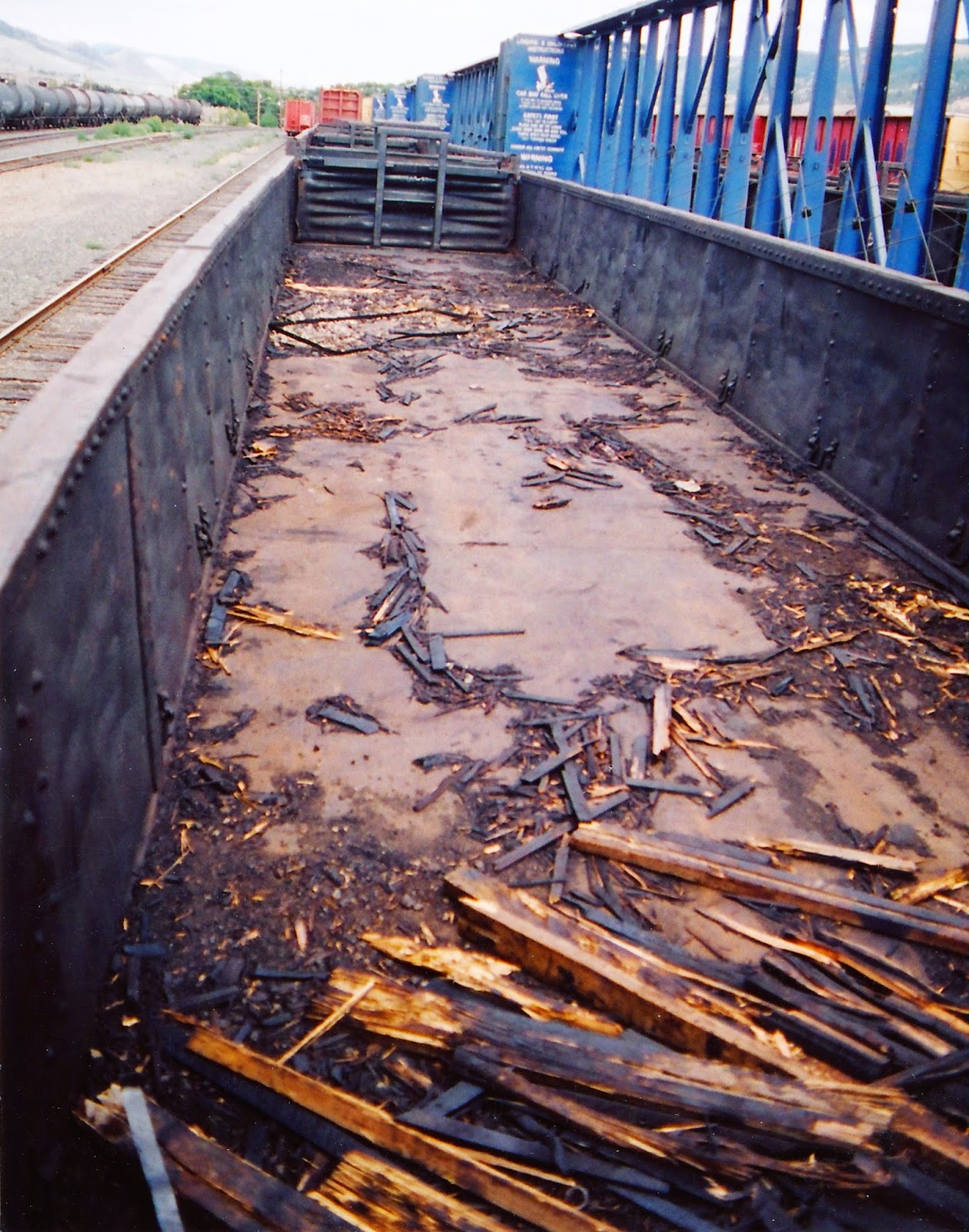 Finally, a crop from a photo that has been published several times which clearly shows Coal Gondolas of the 348000 series in service (see previous post) and the Mill Gons featured in this post.  The first 6 cars are empties probably going to Princeton and then to Allenby on the Copper Mountain Sub to transport loads of copper concentrate for the Westward trip to the Smelter in Tacoma Washington.  This seems to be the car of choice for this lading as soon as they entered service in 1948.  An average of 3 per day were filled at the concentrator and brought down the hill to Princeton for lifting by the Westbound way-freights.  (We will give some attention to the Copper Mountain railway activity in a future post.)  The lighter colour of the sides about half-way up on the interior wall suggest that they are in concentrate service due to its caustic properties that have affected the paint.  Had they been in regular coal service they would be filled to the brim and then some.
The next 5 cars are Mill Gondolas - possibly those with fixed ends - with a lading that only partially fills the car.  Again, this suggests that the mineral is a heavy one, coming up from the coast.  The most likely candidate is lead concentrate from somewhere off-shore, destined for smelting at the Cominco plant in Trail.  Old timers commented on the phenomenal weight of the carloads of lead concentrate that necessitated a short but heavy extra East during steam days.  This photo was taken by the special photographer of the CPR, Nichloas Morant in 1954.  Those nearly new Alcos seem to be handling the train well enough.  Morant took another shot of the tail end of the same train which has also been published ( see Garden p. 354; Sanford p. 116).  This photo provides solid evidence that Gondolas were prominent in the freight trains of the Kettle Valley.   For full photo See Doeksen Vol 1 p. 42; Bain Vol. vii, p. 18; Dean & Hanna p. 54. 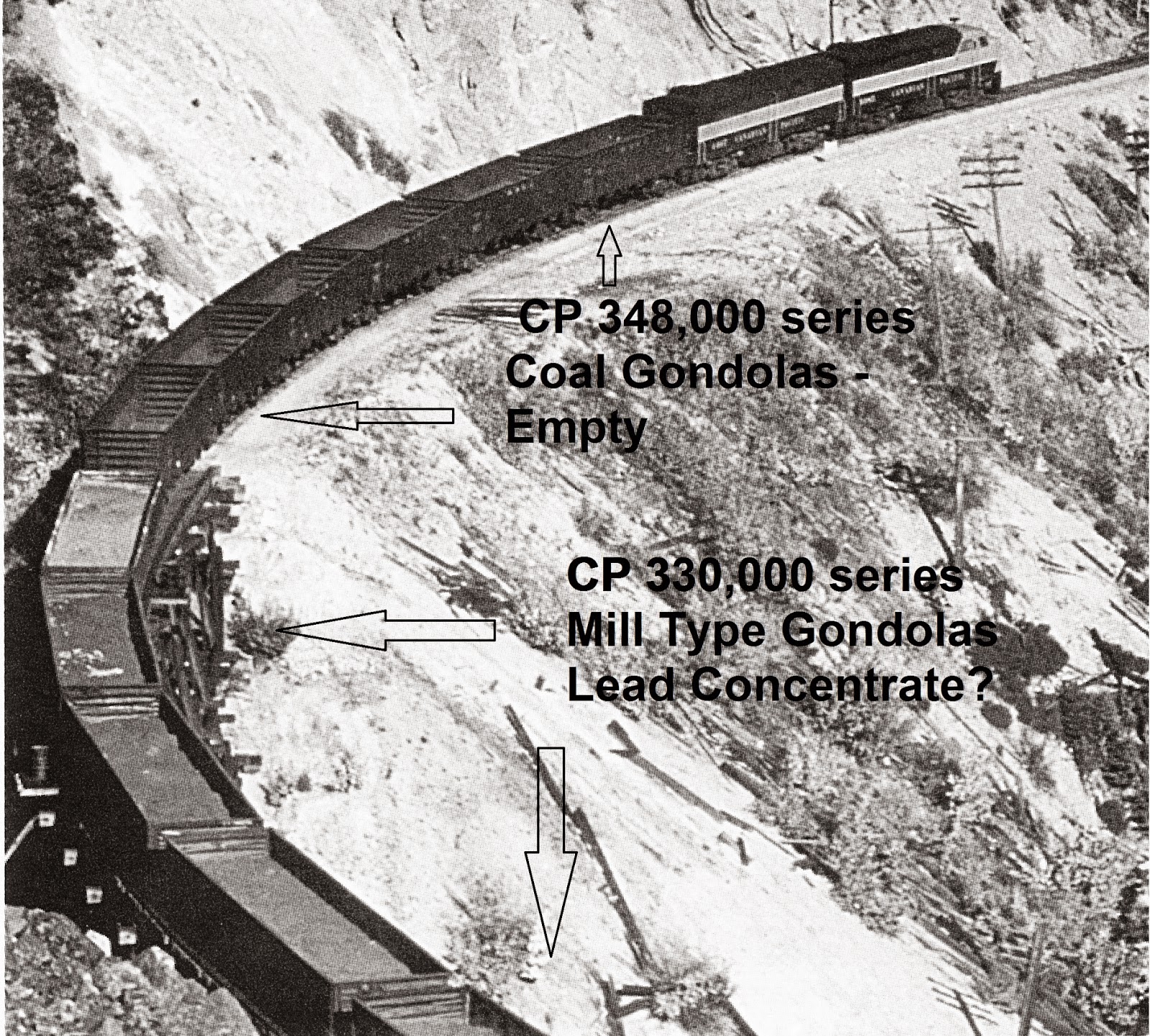 A few statistics follow on the use of Mill Gondolas gathered from the Penticton Scale Reports of 1961.  These 140 loads were all originating from on-line customers on the Kettle Valley railway, one of which was destined for an on-line customer.  "Lumber" could mean logs, poles or timbers.  "Concentrates" were all copper from Greenwood going to Tacoma.  The Silica, Quartz and Rock originated in Oliver and went to Washington State.  Most of these loads traveled Westward.  This list of course is not representative of all originating lading as no reefers of fruit or vegetables were weighed at the Penticton Scale, these commodities being weighed in the various packing houses.  Only a few loads originating in Princeton are recorded in the scale reports and no cars from the Midway and Carmi areas appear either.  Yet we know that many loads of concentrate, ties and lumber were shipped Eastward from there and were presumably weighed elsewhere such as at the Nelson scale.  Nevertheless, the scale reports do give us interesting information on car types, their movements and their ladings.


We are a bit delayed on this post as the research and tabulation required no small amount of time and effort during a time when I have been busy with work and resting from work.  Add to that a Train Show and an operating session.  So, a busy time.  This will have to do till November 28th as I have another operating session and some scenery to build for the new bridge.  I hope to make the latter, the subject of a post soon.