Recently, Tony Thompson published two articles on modeling Crossbucks, one of them appearing on his excellent blog, modeling the SP (July 11, 2020): http://modelingthesp.blogspot.com/ The other expanded article appears in the July 2020 issue of Model Railroad Hobbyist, in the Running Extra segment of the magazine: https://model-railroad-hobbyist.com/   Both provide interesting historical and technical information about this important detail for period modelers.  However, his article covers the crossbucks prevalent in the United States, specifically the Southern Pacific Railroad.  Canadian Crossbucks were a little different. 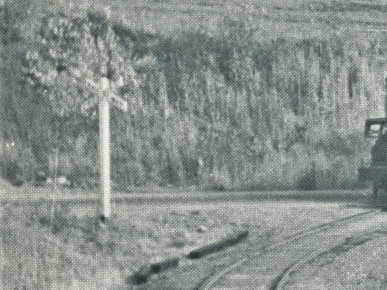 This KV post is a supplement to those articles by Mr. Thompson for Canadian modelers, providing the prototype specifications and a suggestion on modeling the Canadian version of Crossbucks which are formally denoted as "Track Signs".  Here is part of the specific page 32 from the CPR Standard Plans Book which has been in circulation for some time.  Someone edited all the pages of this book, producing a very fair copy, much improved over hard copies that are available for purchase at railroad shows throughout the country.  This fair copy can be accessed through the Canadian Pacific Historical Society at https://www.cptracks.ca/main.asp 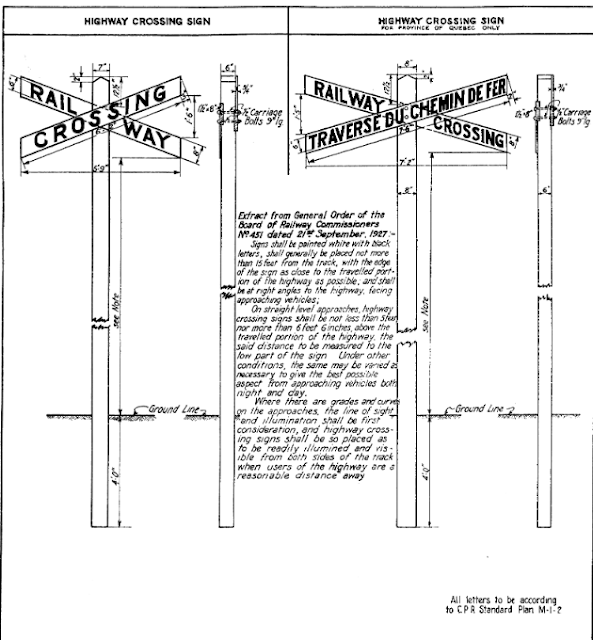 Photos of these crossbucks are hard to come by for some reason, your writer having pored over every book in his collection.  Photos of trains at road crossings do show crossbucks but usually edgewise and not frontal view.  Here is the one full frontal image from one of our books, showing a very old example with a modern additional speed limit plaque and a red-painted post.  The red paint is unusual and not to be emulated in period modeling. 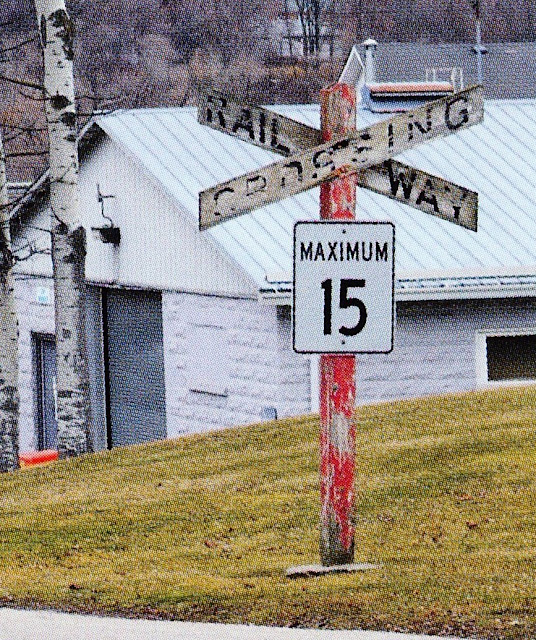 A firm by the name of Just Imagine Printing redrew the crossbuck image to show clearly the dimensions given in the plan.  We take the liberty of reproducing the redrawn image and thank them on behalf of modelers.  Under magnification the original drawing can be deciphered but here is their much clearer version. 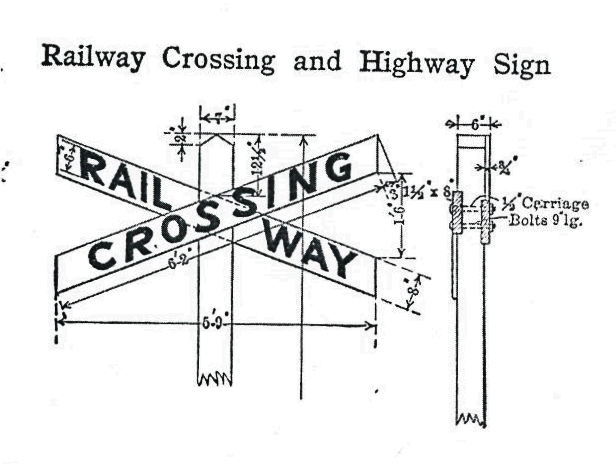 The dimensions are clear and note that the blades or arms are "let in" to the post by half their thickness.  The post and the blades were built of wood, the only metal being the bolts attaching the blades to the post.  The blades are 1 1/2" thick and 8" wide.

The other specifications for the crossbucks are written in text on the Standard Plans page and we here present them so they are legible.  The first part states that the signs are authorized by the Board of Railway Commissioners whose order would apply to all railways of Canada.   Firstly, they shall be painted white with black letters.  The diagram shows the lettering to be vertical on a slanted blade, an italic and reverse italic so to speak.  This lettering style was eventually abandoned in favor of a standard upright lettering style square to the blades.  More on that later.  Of course, they read RAILWAY and not RAILROAD which was the preferred Canadian terminology.

As to height of the signs, the Board specified:

As to location, signs: 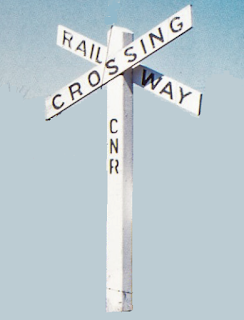 Here is a clean example of a CNR version of the traditional crossbuck sign.  Note that the lettering is only a partially "italic".  We suspect that the trend to square lettering occurred sometime in the 1950's as this example shows.  As was CNR's practice, the post is lettered with their "monogram".

Also note in this that the ends of the blades or arms are cut on the vertical (plumb cut) as in the plan.

Further development with time resulted in the blades being made of metal and the ends squared off at right angles instead of the plumb cut.  The post was still made of wood.  However, the blades were both mounted on the same side in contrast to the opposite faces of the post. 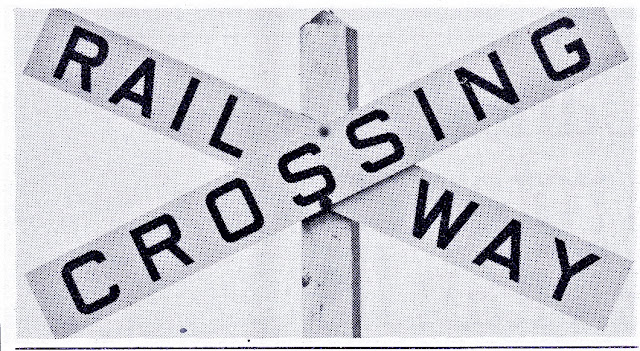 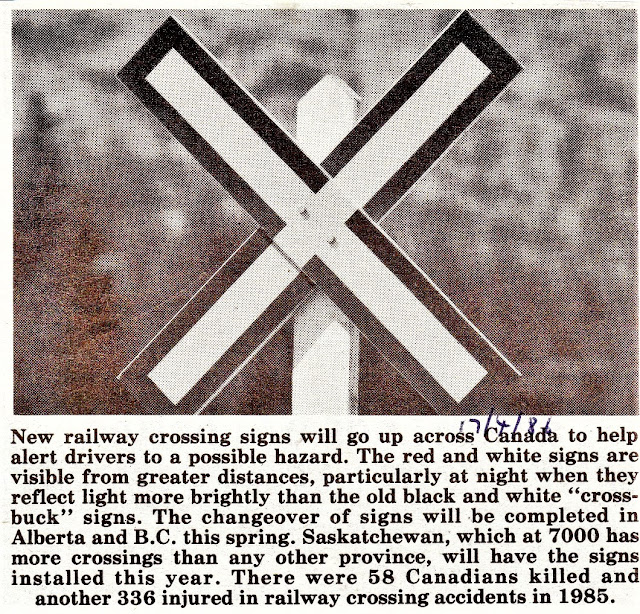 For modelers of the steam and early diesel eras, it is essential to acquire or build models in accordance with the early standard plans.  While a plastic version has been available from Tichy Train Group as part #8180, the blades are mounted on the same side of the post and the lettering is square to the blades.  They do have the correct plumb cut on the blades.  Our layout used these Tichy crossbucks for some time but eventually, we decided to build some in brass.  This was due to the crossbucks being close to the layout edge and susceptible to being broken by errant hand and arm movements - usually when cleaning track.

We decided that correct lettering was in order since we were going to the trouble of building in brass.  This would require custom decals.  While we were at it why not get decals made up for the other signs along the right of way?  So, many hours were spent going cross-eyed to compose a decal sheet in the correct sizes for crossbuck lettering, station signs, flanger signs, mileboard signs and many others.  Negotiating with Mr. Bill Brillinger was a pleasure and here is his address for those who are interested in his services.


For the sign post we used solid square brass stock @ 0.076"  made by K&S Special Shapes.  We obtained this from our LHS, Central Hobbies inVancouver.  Central has no more stock but we had some from previous purchases intended for another project.   After emailing an enquiry to K&S their answer was that the square stock is no longer available.  Nor is the strip brass we used for the blades.  We offer here a photo of our brass pieces to enable the modeler to search out their LHS for such material which might be found in their K&S dislay stand.  The Special Shapes square stock seems to be numbered S-2X?  The Special Shapes strip for the blades is numbered  #815021 and identified as Flat Bars 1/64" x 3/31".

An alternative to solid stock would be square tubing but the top would have to be filled with solder or putty or bondo.  Mr. Thompson used square tubing.  The blades could be cut from 0.015" sheet brass which is still made by K&S.  It is thin enough that the blades could be cut with shears or even a pair of sharp sciccors.  One more possibility is to use round stock for the post which was used by the prototype.  We did a couple of signs with round posts of 3/32" (0.094")  diameter brass rounds which show in the picture below on the left.  Also shown is the Tichy crossbuck on the lower right.

In order to solder the blades to the post, a jig was made out of plywood and grooves cut into the board at the right angles and depths.  A similar jig coud be built up of pieces of wood of suitable thickness.  The angles were transferred directly from the drawings.  Here is the jig we made to assemble the brass pieces for the crossbucks.  Note that the blades were soldered together and then trimmed to length and angle afterward.   The flux pen used is shown at the top. 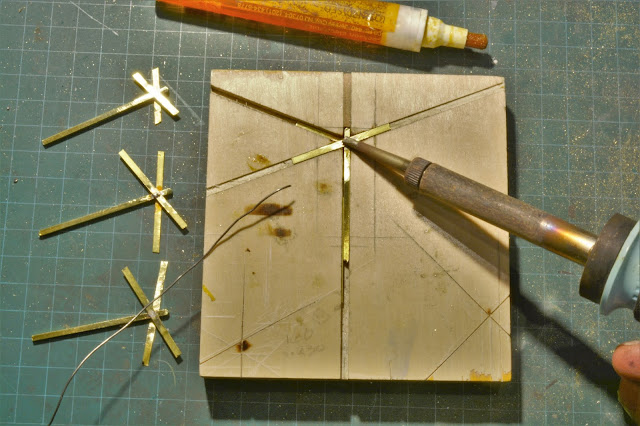 Of course these crossbucks could be made of styrene components and a jig would still be a help to fastening the blades in place properly and again trimmed to length after gluing.  the two vertical lines in  the jig to left and right of the post are the cut lines for the plumb cut of the blades.  A felt pen is used to transfer the line to the blades for the plumb cut.

This was a satisfying project to work with pleasing results.