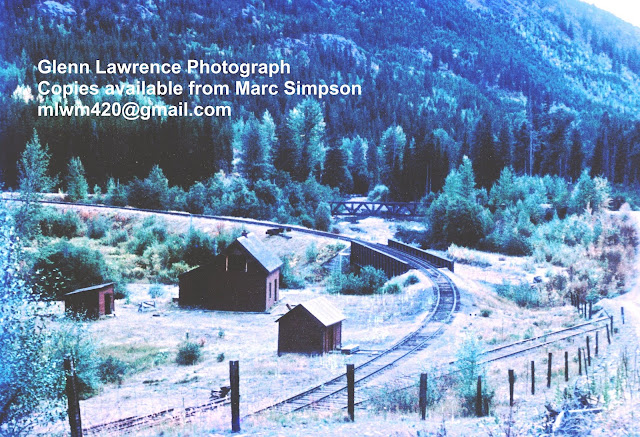 Four miles to the west and downgrade from Brookmere is the "station" of BRODIE where the Merritt Subdivision used to connect with the Coquihalla Subdivision.  This point marked the end of the Merritt Sub at Mileage 65.16.  Much farther to the west, mile "0" for the Merritt sub was the place where the track diverged from the CPR mainline at Spences Bridge.  Later on, at the time of the abandonment of the Coquihalla Sub in 1961, this Brodie junction became mileage 112.7 of the Princeton Sub.

Brodie is not much recognized as a geographical name but it can be located on Google Maps by keying in Brookmere and then moving due west towards the highway.  The loop and Girder Bridge are clearly seen in the earth view.  From Highway 5 it is readily accessed by taking exit 250 at Larson Hill.  A short winding road will take you to the Brodie loop.

The house in the photo is the Section House along with the tool shed and wood shed.  The windows of the section house have been removed.  Out-of-sight and possibly also removed is the other building identified on the drawing that follows as "house" but of this we have no other information.  We present here a few drawings, details and photos to aid the modeler in reproducing this interesting junction in the "middle of nowhere".  The photo above was taken by our late, good friend Glenn Lawrence sometime after abandonment of the Coquihalla sub.  It appears that the points and frog of the switch in the foreground have been removed which may have happened in the late 1960's or early 70's.  It is possible that Glenn took the photo on his 1968 trip to Brookmere, Merritt and the Otter Creek Valley.

Here is the title block for the "Station Ground Plan" of Brodie.  As is evident, it was originally drawn in 1934 with an update rendered in 1940.

Another detail crop from the same drawing follows showing the junction switch with the Merritt Sub already referred to. You can click on the image to enlarge it. This detail also shows the pole line with the actual placement of poles indicated.  The poles carried 17 wires according to the notation.  Note the "drop" (telephone cable) to the register booth (aka phone shack) which is close by the junction switch.  This was not really a shelter for passengers but a building for train crews to record the passage of their trains in a special book called a Train Register.  They could also contact the dispatcher if needed using the telephone located inside.  Curiously the plan denotes the building as a "station" and timetables do show that Brodie was a "flag-stop" but the question is who would have boarded or detrained here since no one except the local section gang lived in the area.

According to the drawing, the phone shack has a footprint of 10 feet by 22 feet and is set back 18 feet from the track centreline.  It does not appear in the photo above, being just out of sight to the left of the picture.  Good photos of the shack are to be seen in the collection of Lorne Bond at Hank's Trucks: http://www.hankstruckpictures.com/pix/trucks/k_duddy/2010/10-11/kettle_valley_rr/file005a.jpg  There are also other fine shots of KV steam trains and scenery.  A tiny side view of this shack is shown in Smuin's book, Mileboards on page 3-11.

Here is the detail crop from the plan showing the Bridge, the junction switch and the phone shack which is described as a "station".  Other things to note are the 4.0 milepost at the bottom of the plan and the right-of-way owned by the railway; this latter is marked out by the dashed and dotted lines.  The right-of-way is usually 50 feet from the centreline of track but in some places it is 100 feet from centreline.  An interesting detail is the switch which seems to be a curved switch with the "normal" route easing into a tangent for the Coquihalla line.  Trying to interpret the figures adjacent to the switch, it would seem that the diverging route of the switch flattens from the loop curve of 12 degrees to 4 degrees 30 minutes through an arc of 4 degrees 30 minutes then reverts to 12 degrees.  The other wye switch near the phone shack has identical figures.  See below.  For modelers, we tend to build our curved switches with full loop radius rather than flattening them through the frog as the prototype did. 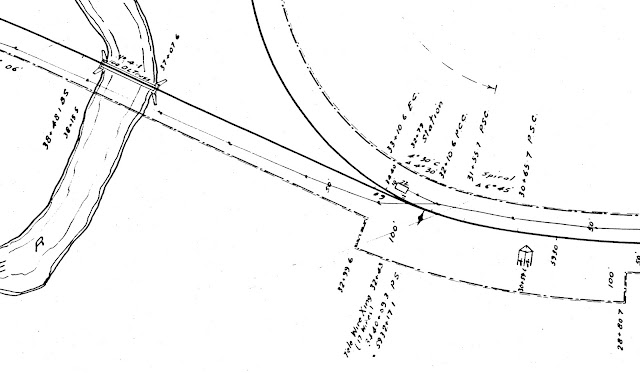 Both of the original two bridges located at Brodie were 100 foot long wooden Howe truss spans replaced with steel versions about 1932. In the drawing above, the bridge for the Coldwater River crossing at Mileage 4.1 of the Coquihalla Sub is denoted as a 100 foot long Deck Lattice Truss.  It can be seen in the background of the opening photograph.  A line drawing appears below.  This CPR line drawing is heavily edited from the original to render the image legible for modelers.  This steel truss bridge was removed some years ago presumably for environmental concerns.  The abutments are still in place although somewhat undermined by the action of the Coldwater River.  An identical truss type was used on the famous Falls Creek/Bridal Veil Falls trestle in the canyon downstream at mile 21.2.  It is still accessible to courageous hikers for measurements and photographs.  The Coldwater version employed only two trusses whereas the Bridal Veil Falls trusses were four in number for the one span.  The Tie Bill of Materials was: 108 ties @ 8" x 14" x 14'-0". 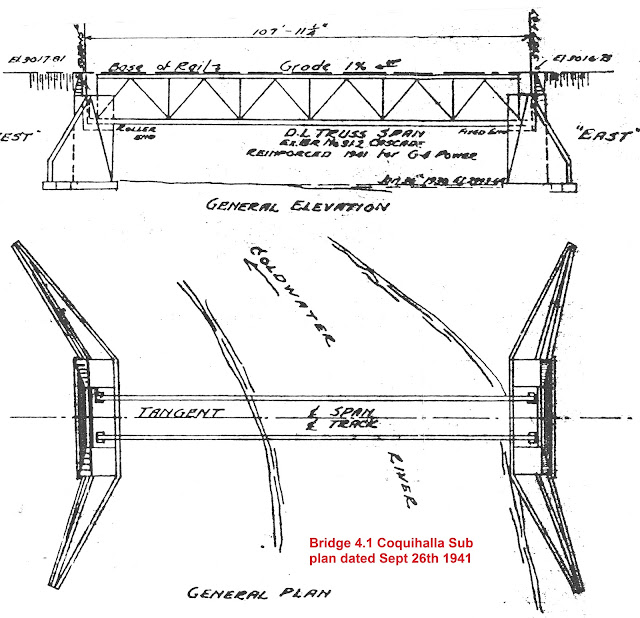 And now, a plan detail of the track, the girder bridge and the structures that show in the opening photo.  These latter are located close by the 12 degree curve of the loop from Merritt.  They were: a No. 2 standard tool house, a section (foreman's) house, a (wood)shed, two privys and the aforementioned house set back from the loop.  According to Smuin, there was a bunkhouse here in early years but no sign of it on the plan or in the photo.  Perhaps section men were given a better dwelling at some point and this is the mystery house. Dimensions of the Section House were 21.5' x 28'.  It appears to be the standard CPR/KVR No. 3 section house with the common addition of a room to the rear which usually housed the kitchen.  Again note the curved switch to the west leg of the wye junction and the back track.  And the loop curvature is described in this part of the drawing as 12 degrees which is considered a "sharp" curve in real railroading.  It turns an arc of 191 degrees 30 minutes between the spirals at each end. 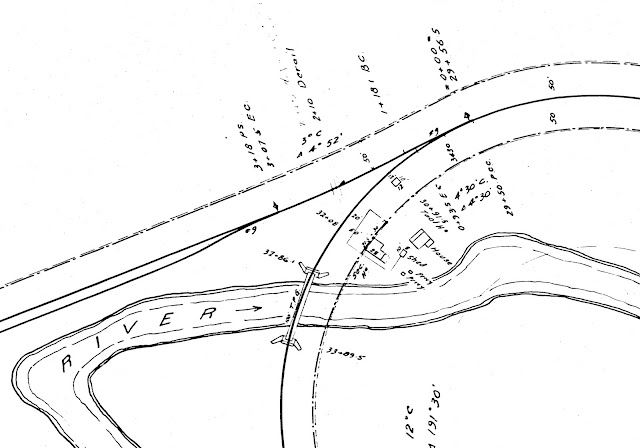 The bridge is still in place as part of the Trans Canada Trail.  It is denoted as a 100 foot long Through Plate Girder. Here is the CPR line drawing of it.  While it is denoted as Bridge 112.9 of the Princeton sub, before 1961 it was Bridge 65.0 on the Merritt sub.  A good reproduction of a drawing of a bridge similar to this one was rendered by Patrick Lawson in the October 2003 edition of Mainline Modeler.  His drawing is for a bridge on a tangent so the substructure differs a little from this one which is located on a 12 degree curve.  Comparison of the plan views will reveal the different substructure arrangements.  The bridges' widths are the same at 18 feet centre to centre for the main girders. 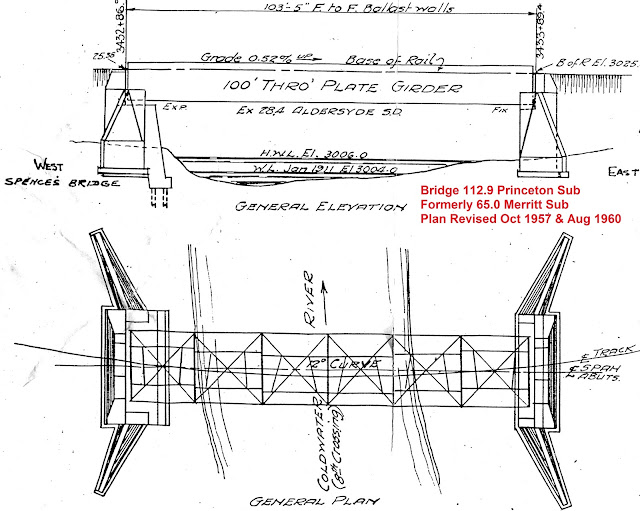 Here is the Tie Bill.  Not sure where and how the 4 odd ties were placed.

This fine photo was taken by Dave Love in the 1980's shows some detail. 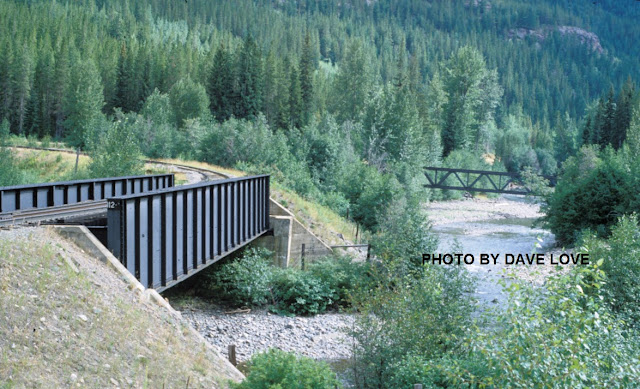 There is an excellent early photo of the Brodie Loop and junction showing the original Howe truss bridges and the section house in the background.  It is dated as 1927 and shows a passenger train crossing the mainline bridge and a work train in the foreground.  It gives a very good overview of the whole track arrangement and of the scene with the high fills.  This photo is from the wonderful collection of vintage photos preserved by the Okanagan Archive Trust Society.  Here is the link to the Brodie photograph:
http://www.oldphotos.ca/archivos/displayLargeImage.php?tableName=photos&imageID=229951233


For completeness, we present the entire plan of Brodie station.  The Rule at the bottom is scaled to the plan where one unit equals 100 feet.  The original plans were drawn in a scale of 1 inch equals 100 feet and the scale at the bottom was produced when the CPR Engineering Department put their historic plans on Microfiche slides. 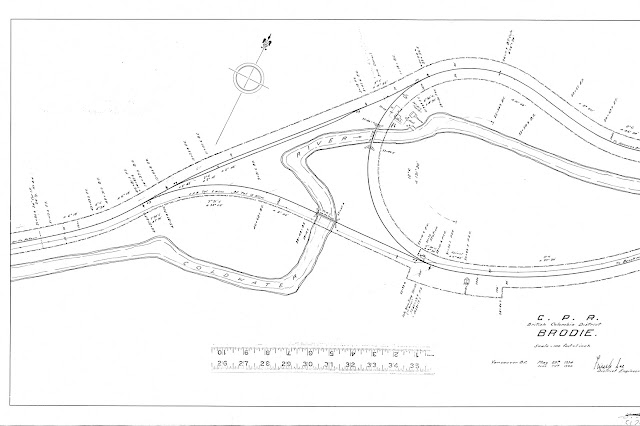 We hope that this subject is helpful to modelers and railfans.  We could treat in detail some other stations on the Coquihalla Subdivision if there is interest.   We part here with a shot of conductor Hicks returning to his caboose after registering his Westbound Extra at the Brodie phone shack on the Kettle Valley Model Railway.

Hopefully the next post will not take us a year to publish but a little feedback would help in that regard.

Update on March 20: A reader has sent us a photo of his work on his KV layout which is very much worth sharing with readers and modelers.  Here is his incomplete but very impressive scale version of Brodie.  The scene is very recognizable and reflects well the view seen at the top of the page.  The section house is superb with its "insulbrick" siding. 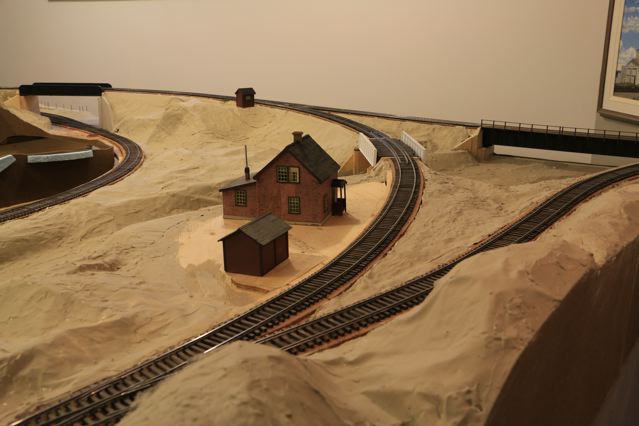