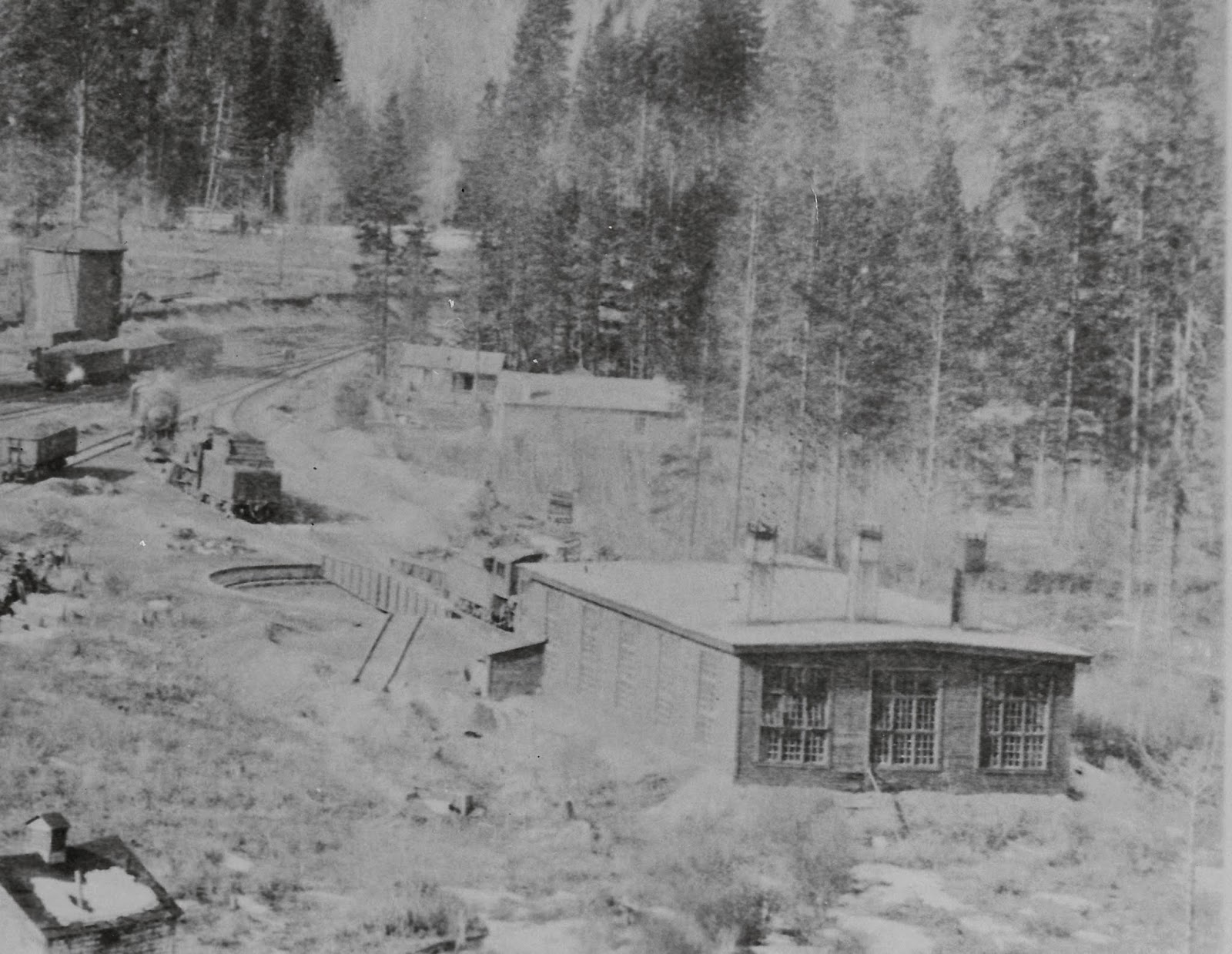 There were three different "roundhouses" erected in Brookmere over the years.  We will describe them a little with a view to helping model railroaders construct miniatures of these gems.  The first of these was a three stall rectangular structure that of course was not really a roundhouse.  Actually, the CPR term in all cases was "enginehouse" but we will use the terms interchangeably here in our posts.  This first one was built fairly soon after the KVR established itself there in 1916 according to Joe Smuin's Kettle Valley Railway Mileboards.  Here is a close up of the enginehouse from a photo published previously in the post for December 12, 2014.


From the same post, here is a close up of the station ground plan.  Note that there are engine tracks either side of the enginehouse itself.  These changed somewhat over the years according to local needs.  Sometime in diesel days, they were removed.  There is a cinder pit thirty feet long on the north engine lead and a depressed track for loading the cinders into gondolas.  The bunkhouse to the east was an old car body assigned to house the watchmen and wipers.  Somewhat less than a one star hotel.  The engineman's bunkhouse was hardly better though it had a water supply and a telephone.  At least they had a privy unlike the watchmen on the lower end of the scale. 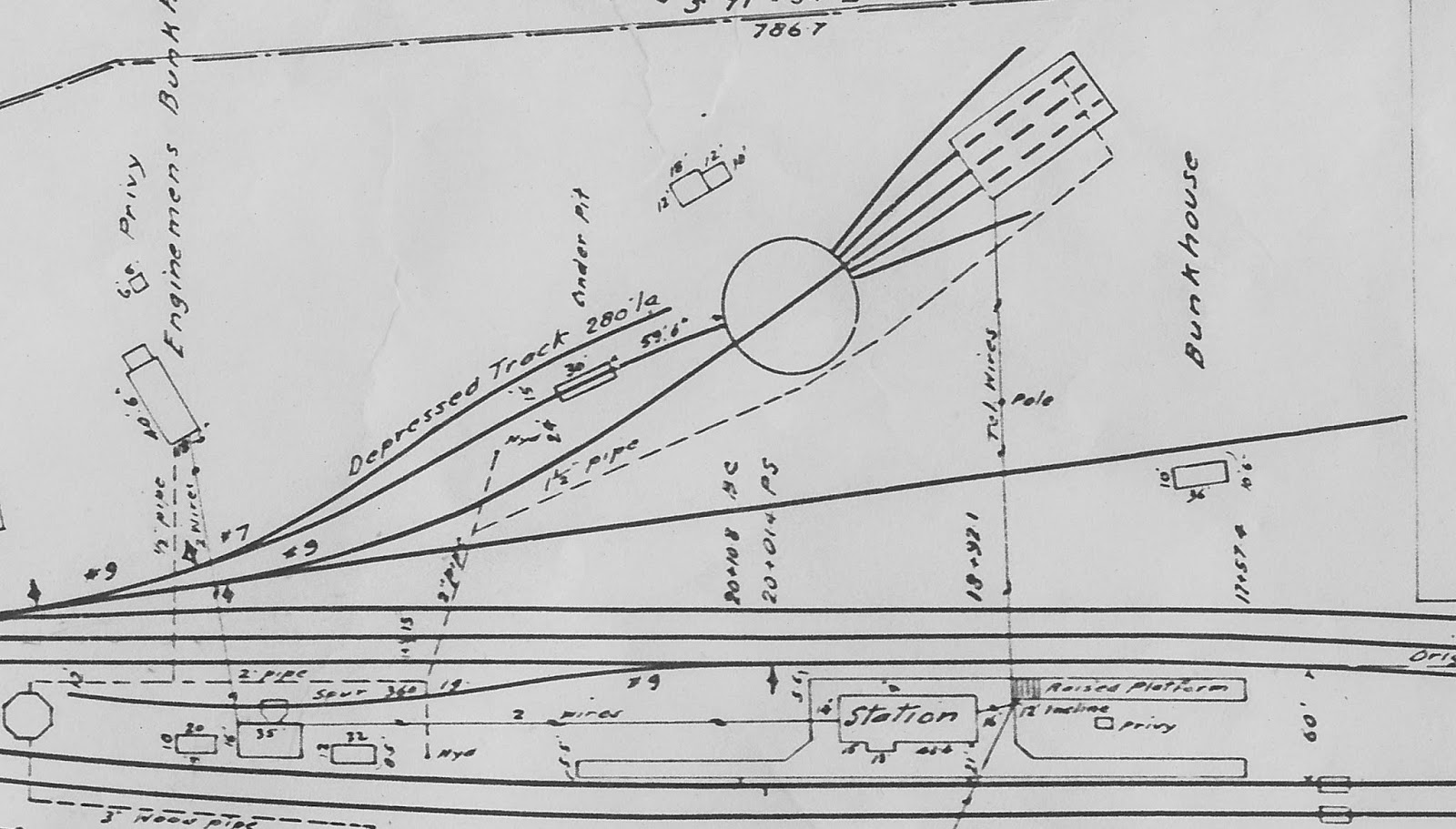 There are some dimensions given on the plan and the turntable is 70 feet long.  From these the size of the enginehouse could be reasonably estimated.  Note the telephone wires that run to the building from a junction near the Station.  At some point, an office for the locomotive foremen was fitted into the rear of the station.  Later on the foreman's office was moved to the new bunkhouse which was built in 1945.

Here is another shot provided by the Okanagan Archive Trust Society also published previously in the same post.  This shows the side of the enginehouse with the tall windows and tall smoke stacks.

There are several photos in KV books which show the front of the enginehouse, notably Robert Turner's Steam on the Kettle, p. 60 (uppermost photo), and p. 58.  The photo caption erroneously identifies this enginehouse as the one destroyed in the explosion in 1949.  Another photo is to be found in Hal Riegger's The Kettle Valley and it's Railways, p. 215.  The front of the enginehouse seems to be identical to the one at Hope which is shown below in another shot from the Okanagan Archive Trust Society.  The locomotives appear to be of the D-9 class which were 4-6-0's, numbered 560 to 597 and were often used in passenger service in the 1920's.

The original Brookmere enginehouse was dismantled and a four stall house was built in 1944.  The date on the drawings is 1936/7 but because of complications arising from the joint track arrangement with the GNR, construction was not undertaken until 1944 according to Joe Smuin's very reliable sources.  One of these sources supplied a very helpful photo of the enginehouse and attests to its date of birth.  The first recognition feature of this second Enginehouse is the placement of the window in  the side wall close to the front doors.  Otherwise, this house does not look much different than the one that replaced it in 1949.  Compare this photo with with the similar image in the following post on BROOKMERE ROUNDHOUSE III. 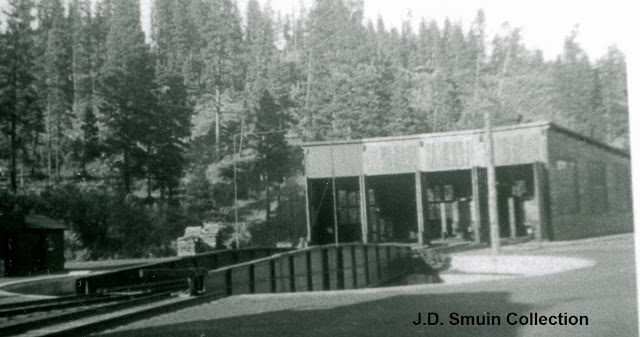 The building was 90 feet long and each of the four rear walls was 27 feet wide.  The front walls were 26 feet high and the rear walls were 19 feet high.  In the upper part of the first drawing are seen the posts and girders that were erected between the stalls.  Note the size and spacing of the "purlins" (roof joists).  The size increases as the span increases from front to rear while the spacing decreases.  To the purlins were affixed a roof of 2" x 3" 's on edge.  These members were nailed hard to each other so that the roof was solid wood, 3" thick. It should be noted that solid wood is actually an effective fire resistant component; i e, it takes fire a long time to burn through.  This was a common practice in construction of the time.  Even up to the 1960's, fire walls in wood-frame apartment buildings were constructed in the same manner, but usually of  2" x 4" 's and sometimes 2" x 6" 's.  The roof membrane is specified as Tar and Gravel although we cannot confirm its actual use.  In the lower part of this first page, the faint outline of the original enginehouse from 1916 can be discerned. 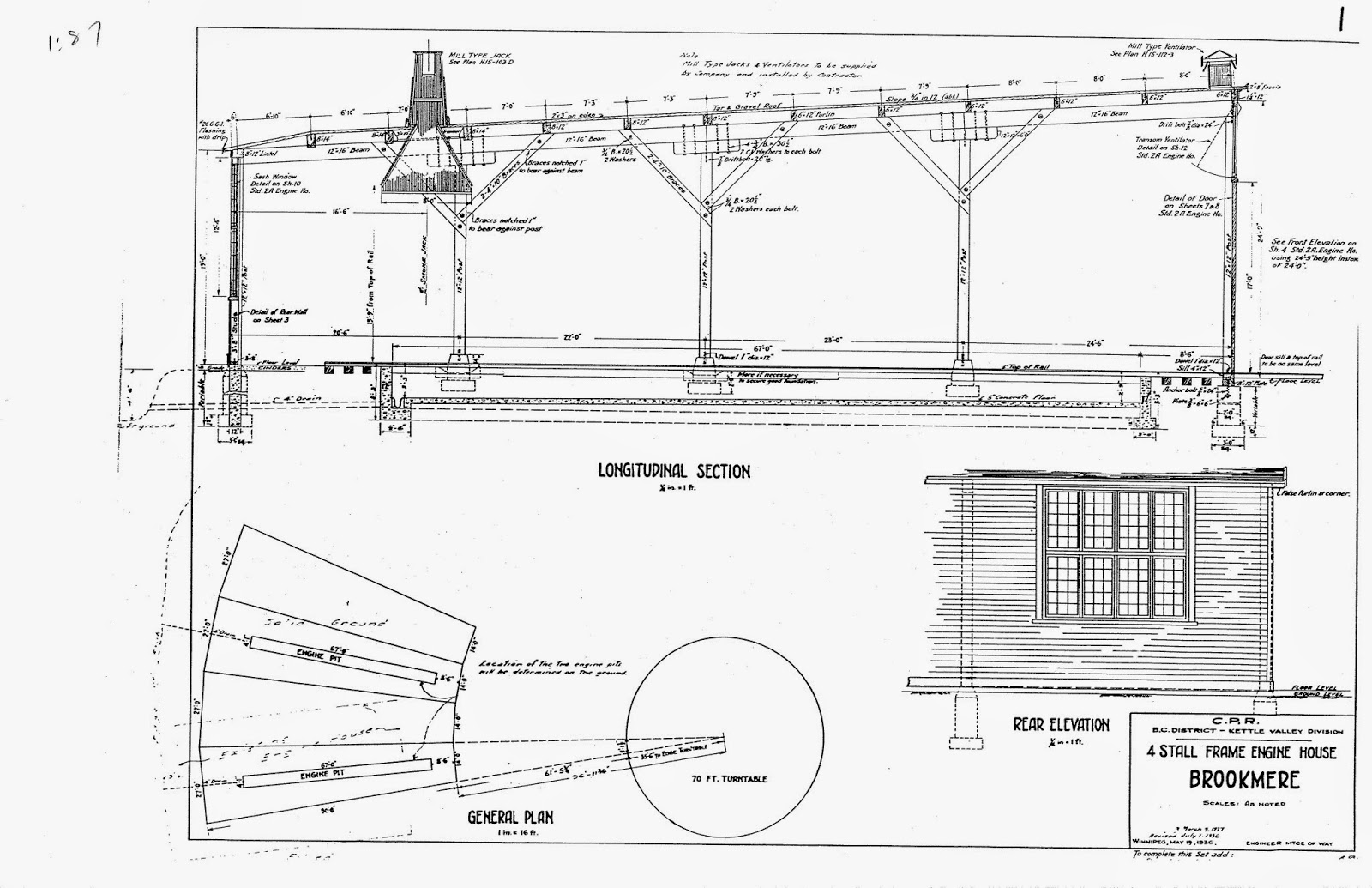 Page 2 is the plan view.  The building's walls were constructed of 3" x 8" plates and studs on 24" centres.  There were two engine pits that were concrete-lined.  Otherwise the floor was made of cinders.  Only the tops of the piers for the posts would show.  Purlins are set at right angles to the centre lines of the tracks on top of the main Girders which were 12" x 16".  Many of the construction details will be made clearer in the next post with photos of the third enginehouse. 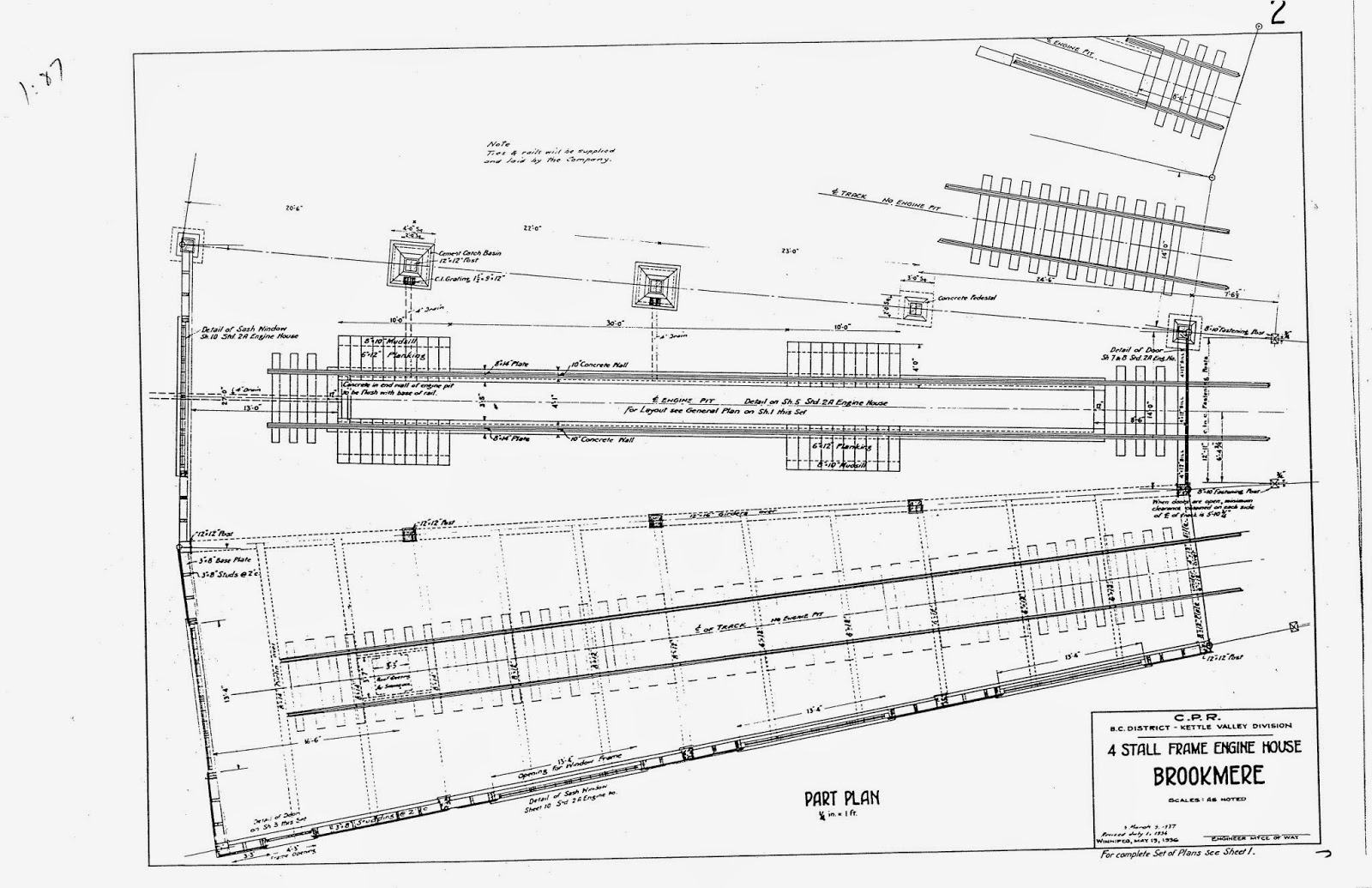 This third sheet shows the outside wall (called "end wall" on the drawing) with internal framing that is similar to the posts and bracing shown in the first sheet.  Many windows are provided for as there was no electric light available.  Wall sections and details are also provided. The wall studs would be exposed as there would be no internal wall finish.  No insulation other than two layers of building paper between the ship-lap and the 6" drop siding (a k a novelty siding).  Heating would be provided by whatever locomotives had a fire going.  Oh, how we don't miss the good old days!  Can you imagine working on the iron horses with large steel wrenches and other heat-drawing tools in your hands in sub zero weather - even with gloves on? 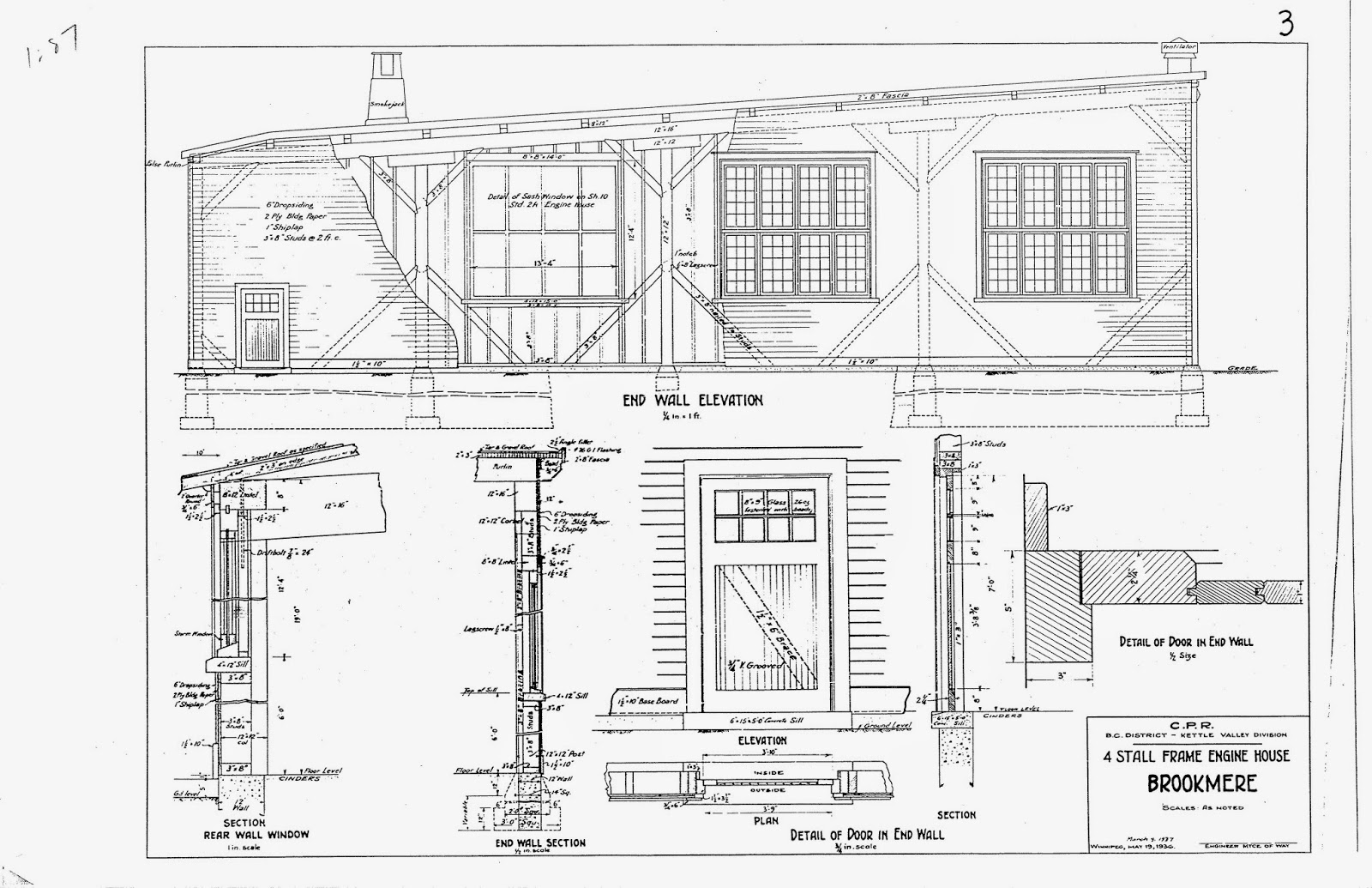 Here is a drawing of a smoke jack that predated the one shown in page 1.  It differs principally in not having tapered sides but this drawing is included here to help with dimensions and to illustrate the methods of construction and installation.  This item would be built up of solid 2" x 2" lumber in the various sections shown on the right side of the drawing. 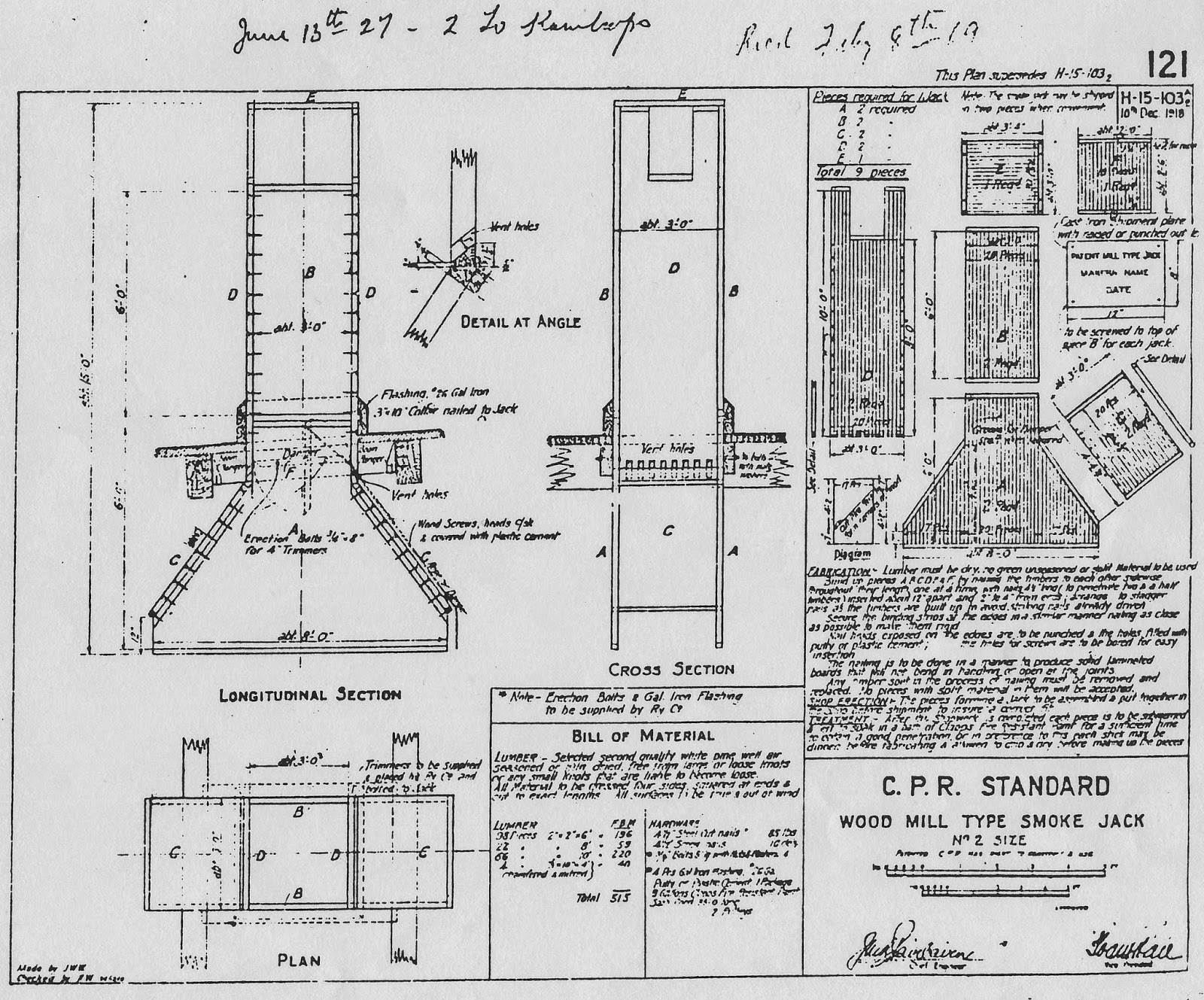 Our final drawing is from another source and shows all the detail for "standard" enginehouse doors. It is dated 1945 and would probably be correct for this enginehouse.  Placement of the "wicket door" (man-door) might vary with the local situation.  The glazed door was not an option to be found on the Brookmere roundhouse. 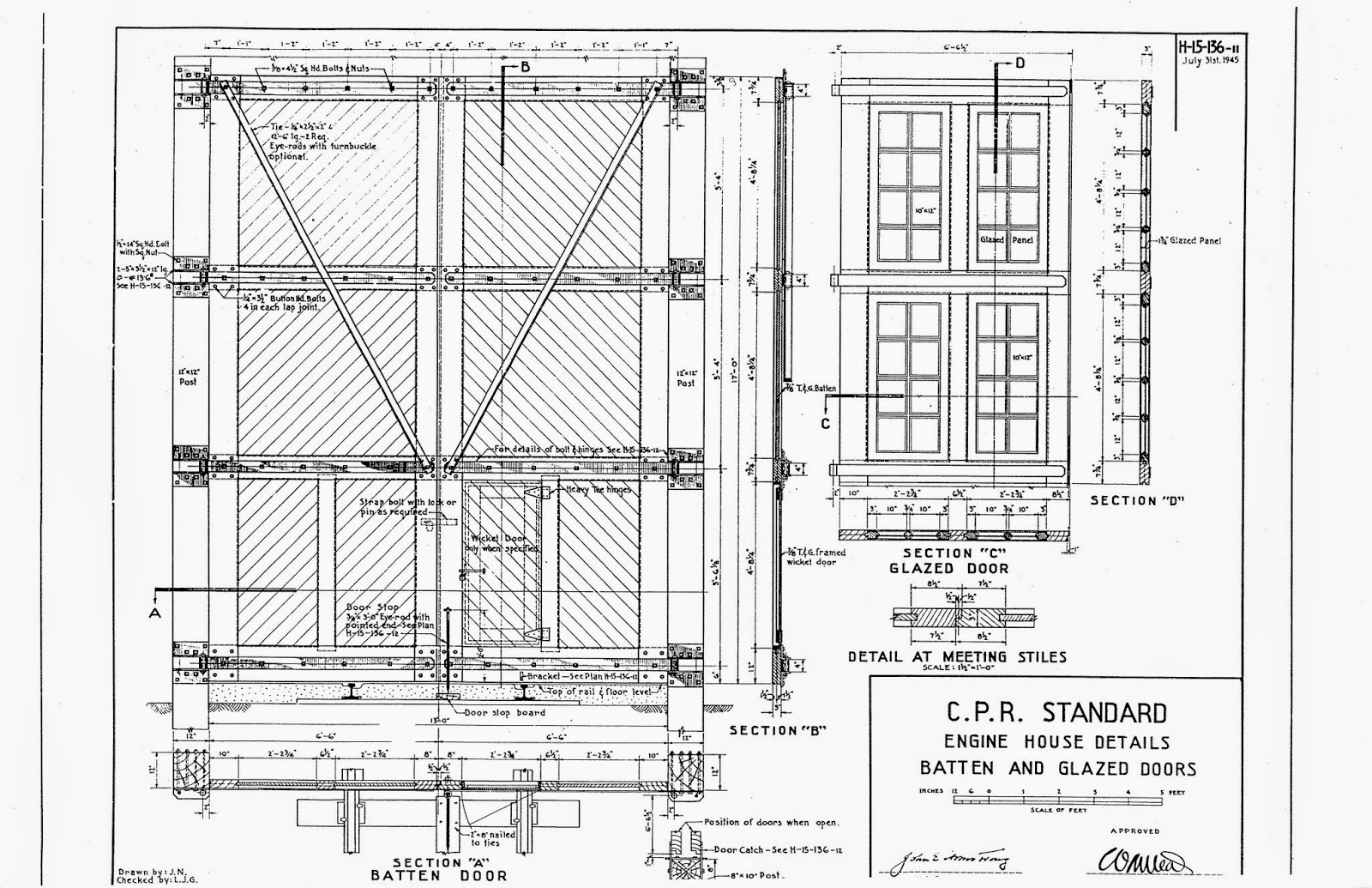 This is the roundhouse that was destroyed in the boiler explosion in March, 1949.  A distant shot of it can be seen in Turner's book on page 60, the middle photo.  There is a photo of the damaged roundhouse in Joe Smuin's other book, Canadian Pacific's Kettle Valley Railway, published by BRMNA, p. 28.  On page 29 is seen the third enginehouse.

Next week we will continue with a drawing and photos of the third roundhouse for Brookmere.  It is similar in many of the details to the one presented here although slightly longer at 100 feet.  And perhaps our model will be ready for presentation.  We have been busy with building it and then a trip to the Bayrails Operations meet in San Francisco.  So, we have been a little short on time for the blog.