Brookmere was a busy Division Point both during and immediately after the war years until the end of steam in 1954.  Today we look at the layout of Brookmere during this period.  As mentioned in the previous post, after dieselization in 1953, the train crews were much reduced and terminal activity suffered substantially due to the efficiencies of the diesel locomotive.  But for the "golden age" of steam railroading under consideration, it was a very interesting time and the veterans talked warmly of this part of their service time.  With the prosperity of the post war era and the technological developments taking place, the physical plant of Brookmere was long overdue for an upgrade and indeed the entire southern mainline was receiving many improvements in the 1940's (cf. Sanford, Steel Rails and Iron Men, chapter 8)
The west end of the yard tracks were redesigned with a yard lead and substantial changes made to the service tracks and buildings.  This happened most likely in late 1943 to early 1944 which is the period between the date of the track-plan shown in the last post and the date of the one reproduced today.  For further detailed information we rely on and heartily recommend Joe Smuin's Kettle Valley Railway Mileboards.
Before going further with the commentary on the drawings presented here, we should point out that there are some other fainter lines appearing in this drawing which we believe are simply draftsman's doodling; for instance there never was a wye in Brookmere as the lines suggest and there were no additional yard or service tracks added to the existing three yard tracks within the "wye".  We speculate that CPR designers and draftsmen were looking at ways to provide turning facilities for the new locomotives coming on stream for the southern mainline in the late forties.  These new locos were principally, the 5200 mikados with their large 10,000 gallon tender which made them too long to fit on the 70 foot turntable.  The drawing shows a faint circle surrounding the existing turntable and this suggests that they were considering a larger table.  This was not to be of course, and we understand that for the few occasions when a 5200 had to be turned, it was run down the grade to Brodie using the wye junction to do the deed.
There were two permanent changes to the east end of the yard that were made: yard track #3 which had formerly been stub-ended was connected to the other two yard tracks; a caboose track for the Princeton subdivision crews was built between Yard track #1 and the main line.  The interesting wavy offset to the yard tracks was retained in order to get around the station.  Track Centres are 60 feet near the Station. 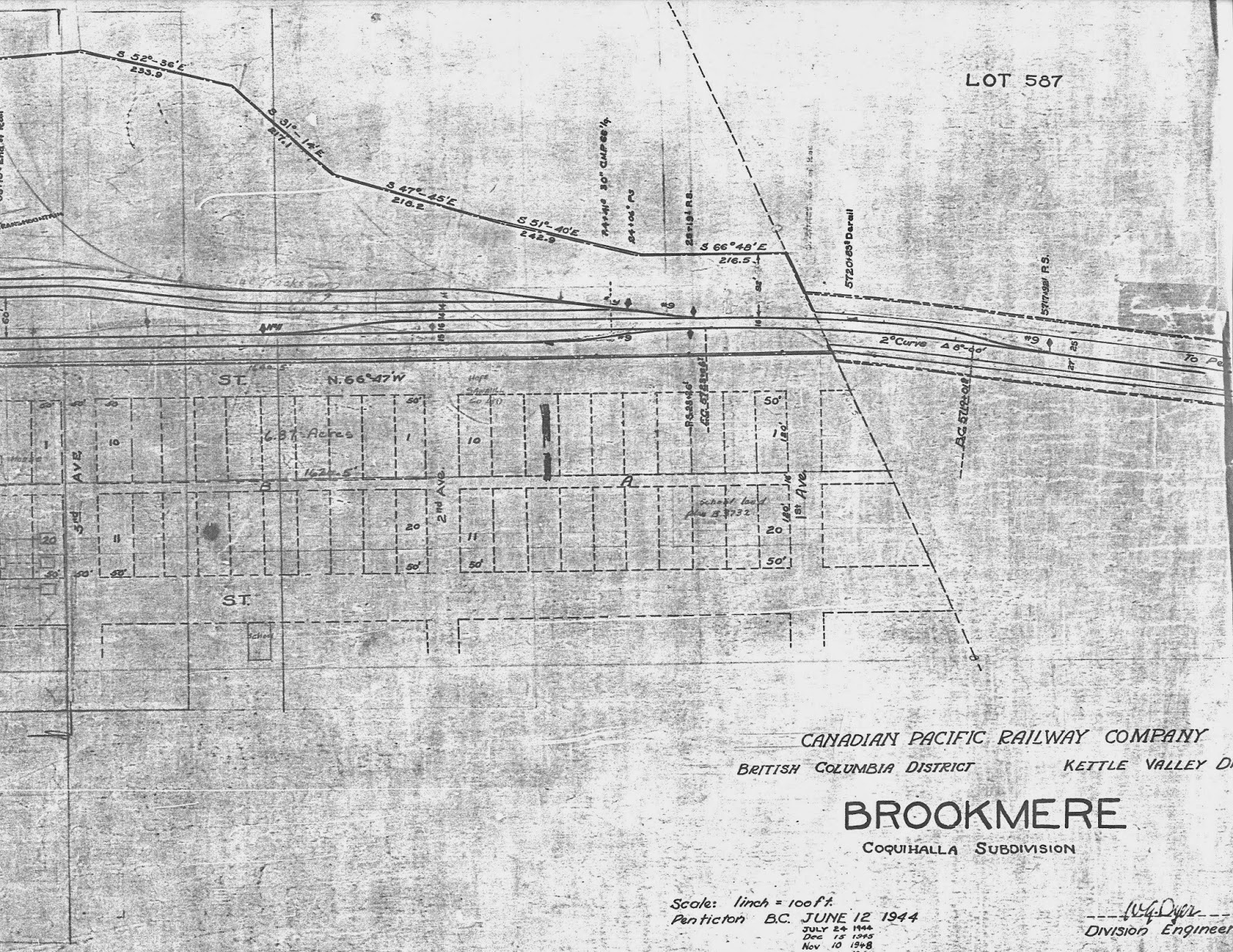 The western half of the plan shows the substantial changes that occurred between 1944 and 1949.  As mentioned above, there is now a yard lead on this end.  In addition, a service track has been installed north of the yard lead for the new coal plant and the relocated sand house.  The elevated service track has been removed and the old coal chute demolished.  There is a story behind that which we will get to eventually.  A major improvement to the working conditions of the engine crews was the erection of a vastly more comfortable Engineman's Bunkhouse.  A duplex residence was constructed for the  Locomotive Foreman.  These upgrades had probably occurred in 1944 or '45. More were to come. 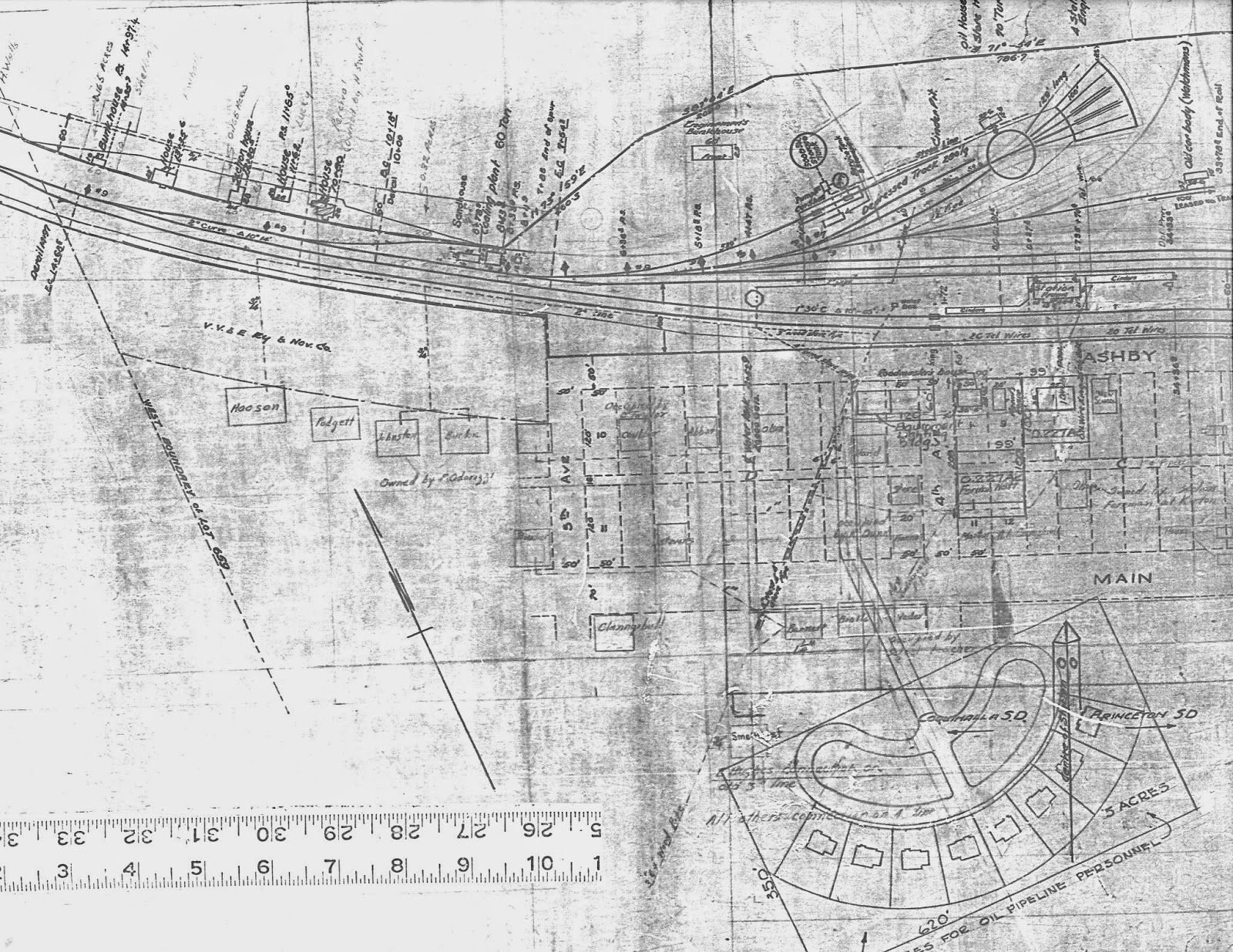 The original date on this drawing is June 12, 1944, with changes noted to April 16, 1949.  However, many items on the drawing were built later than this last date as we shall see.
There were two significant events in 1949, which are reflected in the construction of new engine facilities.  These are drawn on the plan.  The first was the destruction of the Engine House because of a boiler explosion on March 21, of that year.  A new and larger Engine House (the third one) was soon constructed to replace it.   Also in that year was begun the conversion of the Kettle Valley steam engines to burn Bunker "C" Oil.  Most locomotives had been burning coal to that point.  Although the Coaling Plant remained for a few more years, Oil Tanks and service pipes were installed along with the requisite service track and unloading shed.  Although not showing on the plan, a boiler house appears in photos of the time which would have provided steam heat to the Bunker C Oil to enable it to flow especially in cold weather.  The Sump drawings show the heating coils.  Best guess for this building is that it was a standard No. 2 Pump House [16'x32'].
The buildings and track plan can be seen more clearly on the following enlargement. 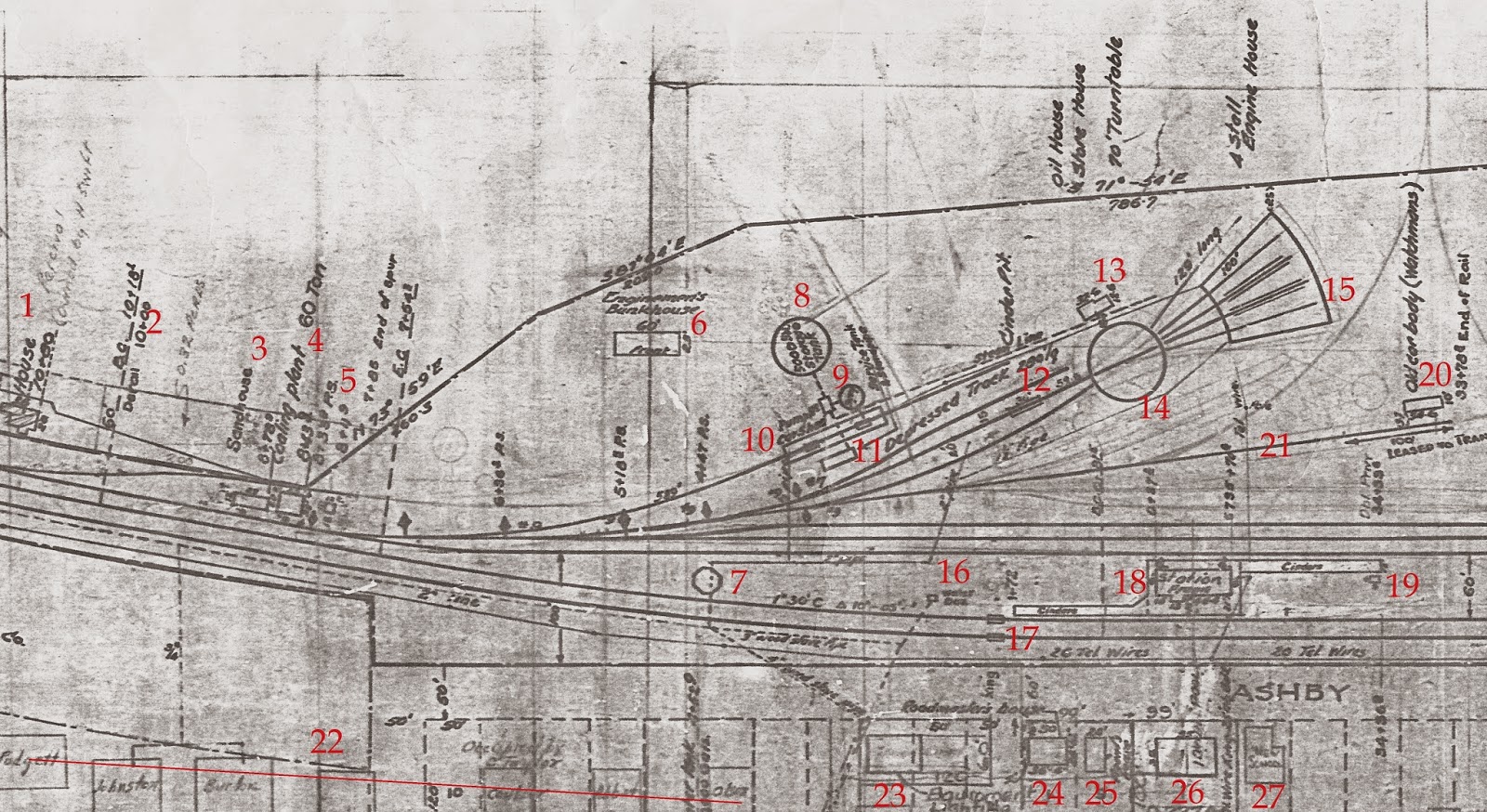 Moving roughly from left to right on this plan we will identify the buildings on the plan above:
We offer one more plan which is dated June 15, 1949.  This was part of a drawing showing the "Proposed reinforced concrete fuel oil sump and unloader at Carmi & Brookmere".  The word "Proposed" is important when it comes to interpreting CPR drawings as sometimes the proposed structure would not be built at all or at least major details or dimensions varied.  In the case where the work was carried out, eventually the drawing would be updated and the word "Existing" would be substituted to show this.  However, this last drawing does reflect what was actually built and the detail is not obscured by a draftsman's doodles.  Unfortunately, as with the previous drawing, some of the dimensions are impossible to decipher.  Curiously, the Engine House does not appear.  Perhaps the CPR was undecided about how to replace the one destroyed in the boiler explosion a few months earlier. 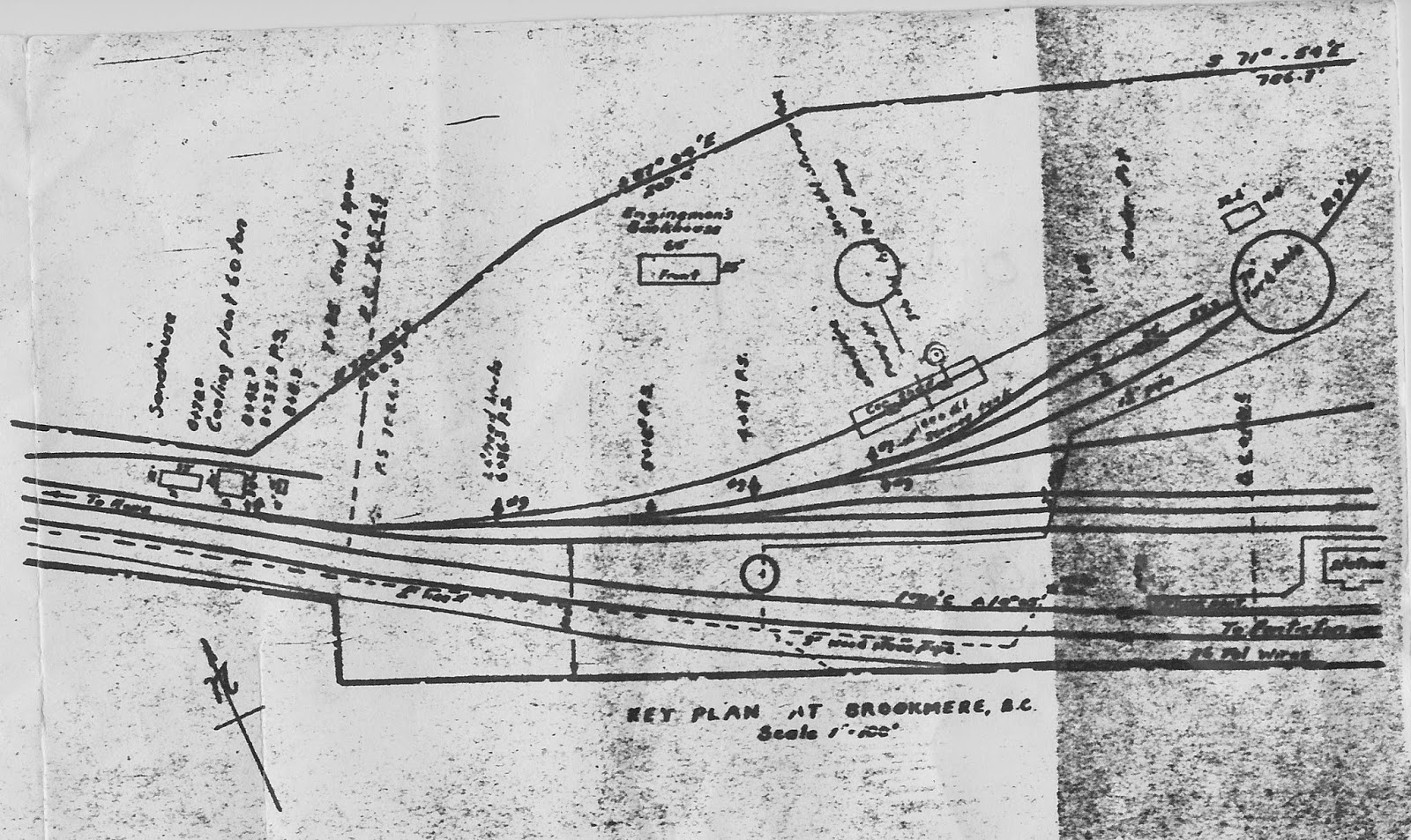 We will continue our look at Brookmere Division Point in later years with some photos and details on the track layout and buildings in the next post.