In the summer of 2003, Robert Schleicher of Railmodel Journal came to Vancouver looking for potential layouts to feature in the magazine.  Making contact through one of the local hobby shops, he arranged to view the layout in my basement.  After the shoot, we talked of an article and captions to accompany the photos and the result was published in November of that year.  This was part of the lead-up to the NMRA convention in Seattle in 2004.  It turned out that several Vancouver area layouts hosted operating sessions and tours in association with the Convention.

Recently,  we have had a few inquiries about the layout and its trackplan and herewith we post a scanned copy of the RMJ article in response to those requests.  The layout has been substantially developed and expanded since the article appeared and eventually, this blog will treat of the expanded trackplan which is an interesting development in its own right.  Today's post should provide an initial answer to the question.

The RMJ article had at one time been made available on the internet at: http://www.trainlife.com/magazines/pages/177/12799/november-2003-page-1  Unfortunately, the site no longer reproduces the article.  Here is the entire layout tour article with some additional comment.  Readers can click on the images for larger views of the pages and pictures.

This cover shot shows No. 11, the Kootenay Express exiting the west portal of tunnel no. 1 at Mileage 19.7.  Engine 5120 has been modified since the photo was taken to bring it more into conformity with its prototype.  See the post at: http://kettlevalleymodelrailway.blogspot.ca/2014/10/the-passenger-trains-of-dave-hanas.html 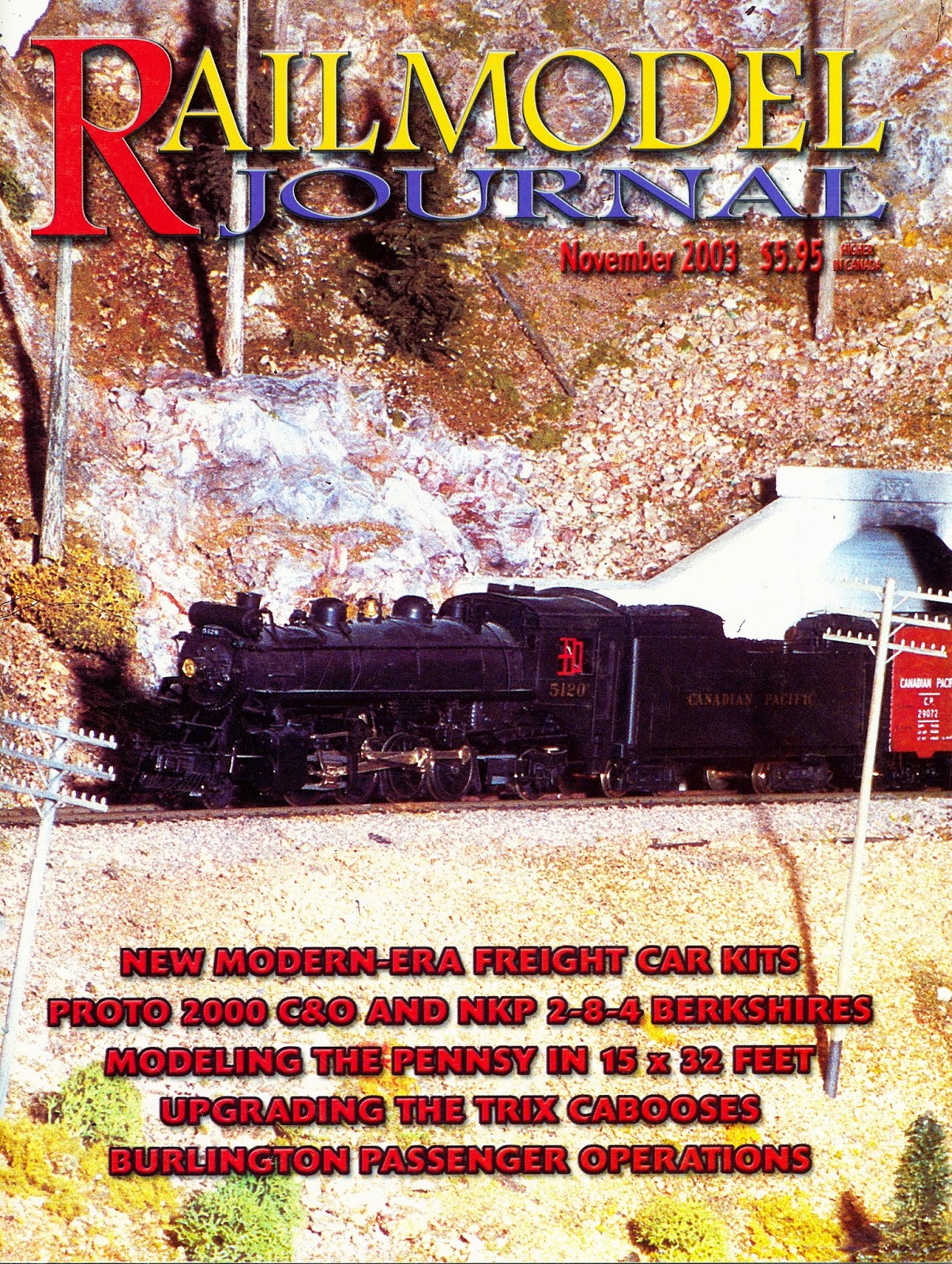 A small error crept into the text in the middle column of page 29.  It should read,"The members are usually made of 3 1/2-inch wide "boards" cut from 5/8-inch plywood."  These plywood boards are more stable than solid stock and usually less expensive.  In a few cases we used solid maple hardwood for longer spans.  The caboose was built from a Juneco kit but has long been retired after the purchase of Trueline Trains versions.  The green "beach-ball" on the ground is a marker for a Kadee uncoupling magnet and should have been removed for the photo. 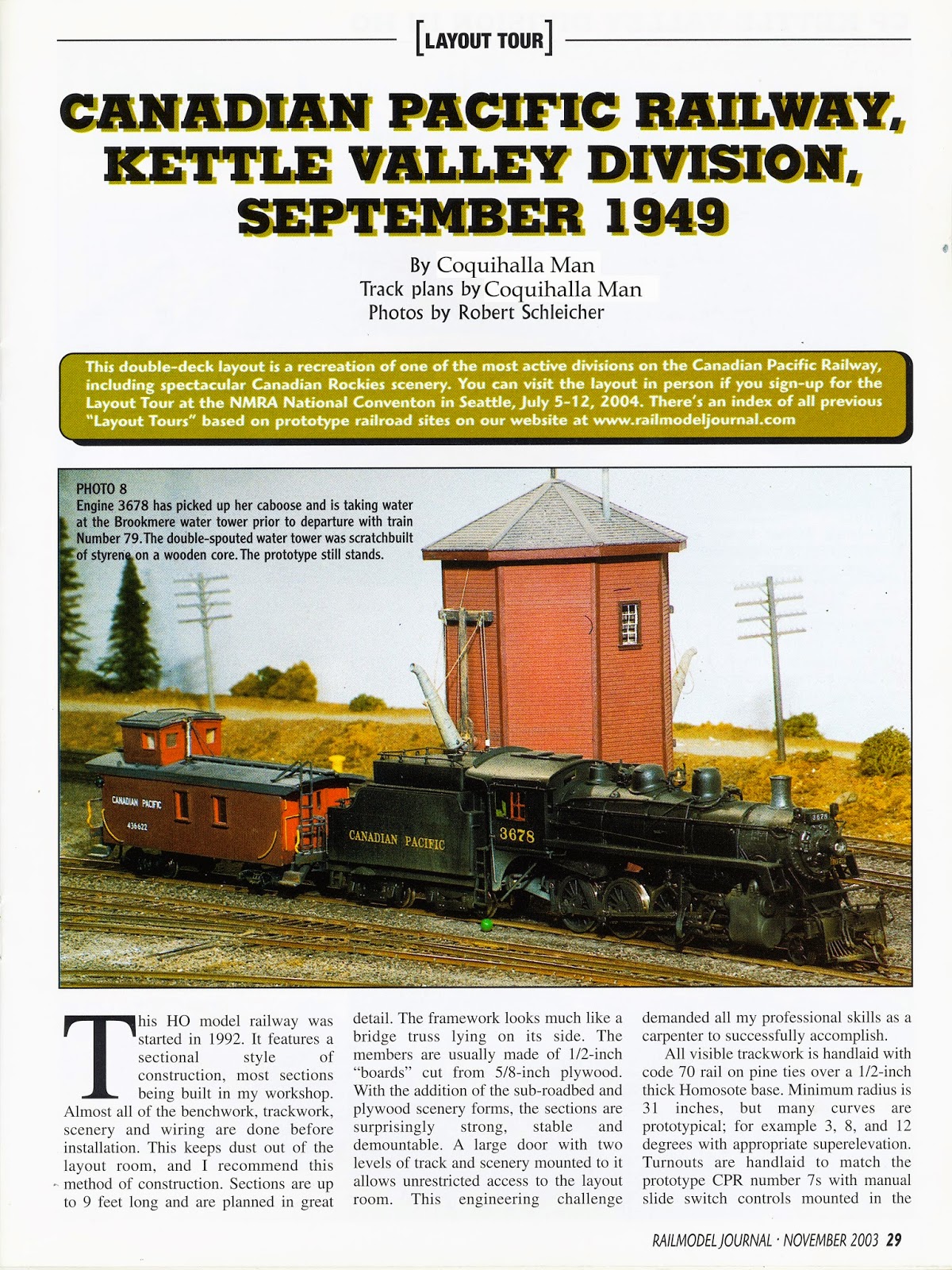 Page 30 has two photos taken from opposite ends of the room.  Photo 1 shows Brookmere railyard looking east.  The Coquihalla sub is on the upper level and this same view looks west on the upper level.  For operations it would have been better to have a consistent east and west orientation.  This is one small drawback of a two level layout with a helix in the middle.  It is a small price to pay for doubling the length of the mainline and allowing additional scenic possibilities. 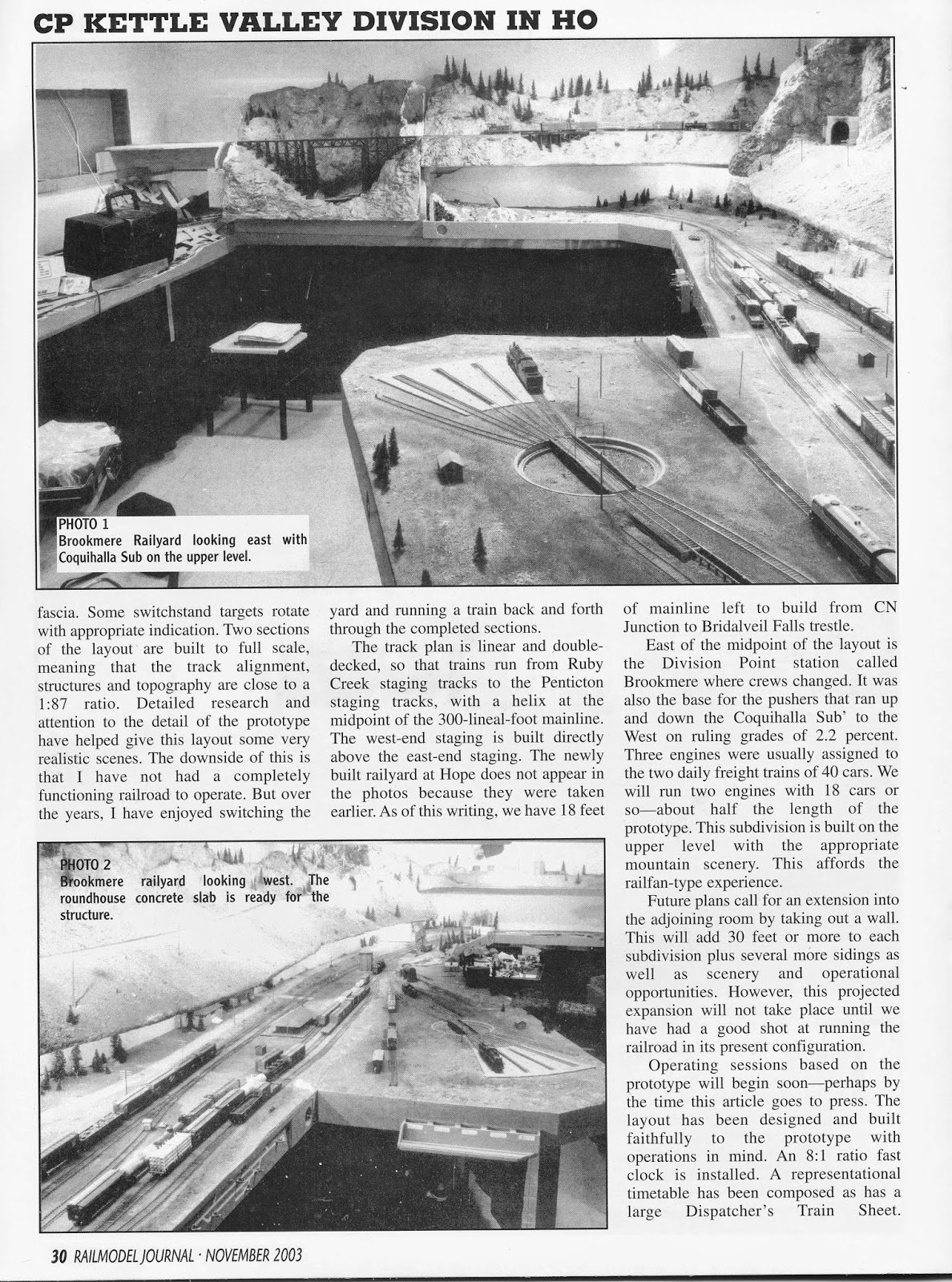 The first of the trackplan pages follows and shows Coquihalla summit with its Wye for turning pushers and work trains.  To the left of the wye is the entry into the helix.  Beside the camera symbol #16 is a line designating the hinge side of the entry gate.  The other brown line suggests the leading edge of the gate and its swing line.  The caption for photo 9 refers to the absence of "extra flags" which is no longer the case.  Extra flags and green flags for a "following section" have only recently been brought into use for our operating sessions.  They are a nice detail that is rarely modeled and have the added operational feature of being removable. 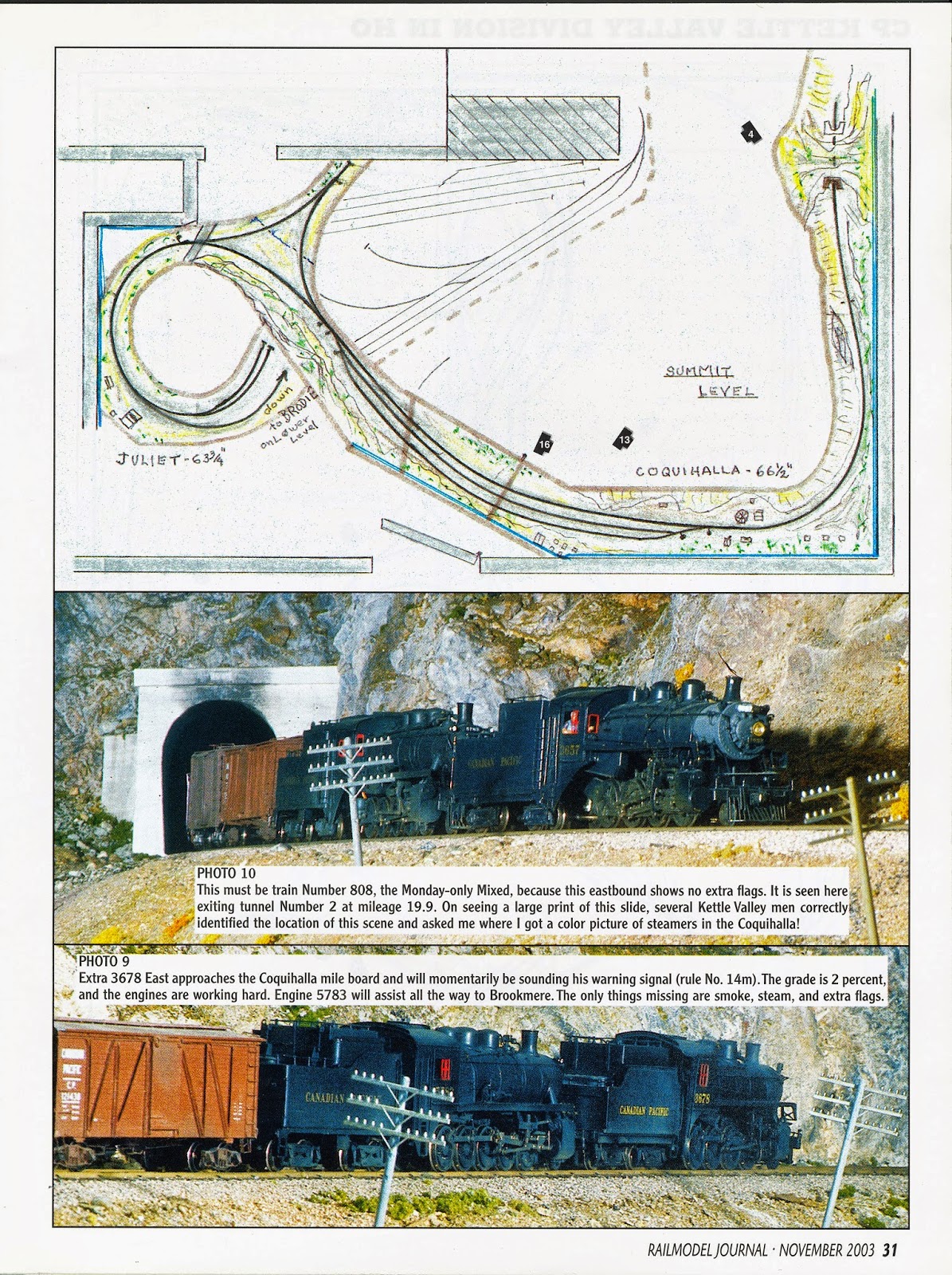 The upper level track plan is shown on page 32.  At the time of Robert Schleicher's visit, part of the upper level was unbuilt so it does not show in the photos (#1 & #4).  The Wye at Hope connects with the lead for the staging tracks and is useful for turning trains between sessions as well as functioning as the real one did for turning pushers.  It may not be evident immediately, but the helix is not connected with the track in this level.  The mainline to the staging tracks circles the outside of the helix tub.  These turn-back loops are not objectionable as they are out of sight and circle the tub making very efficient use of the space. 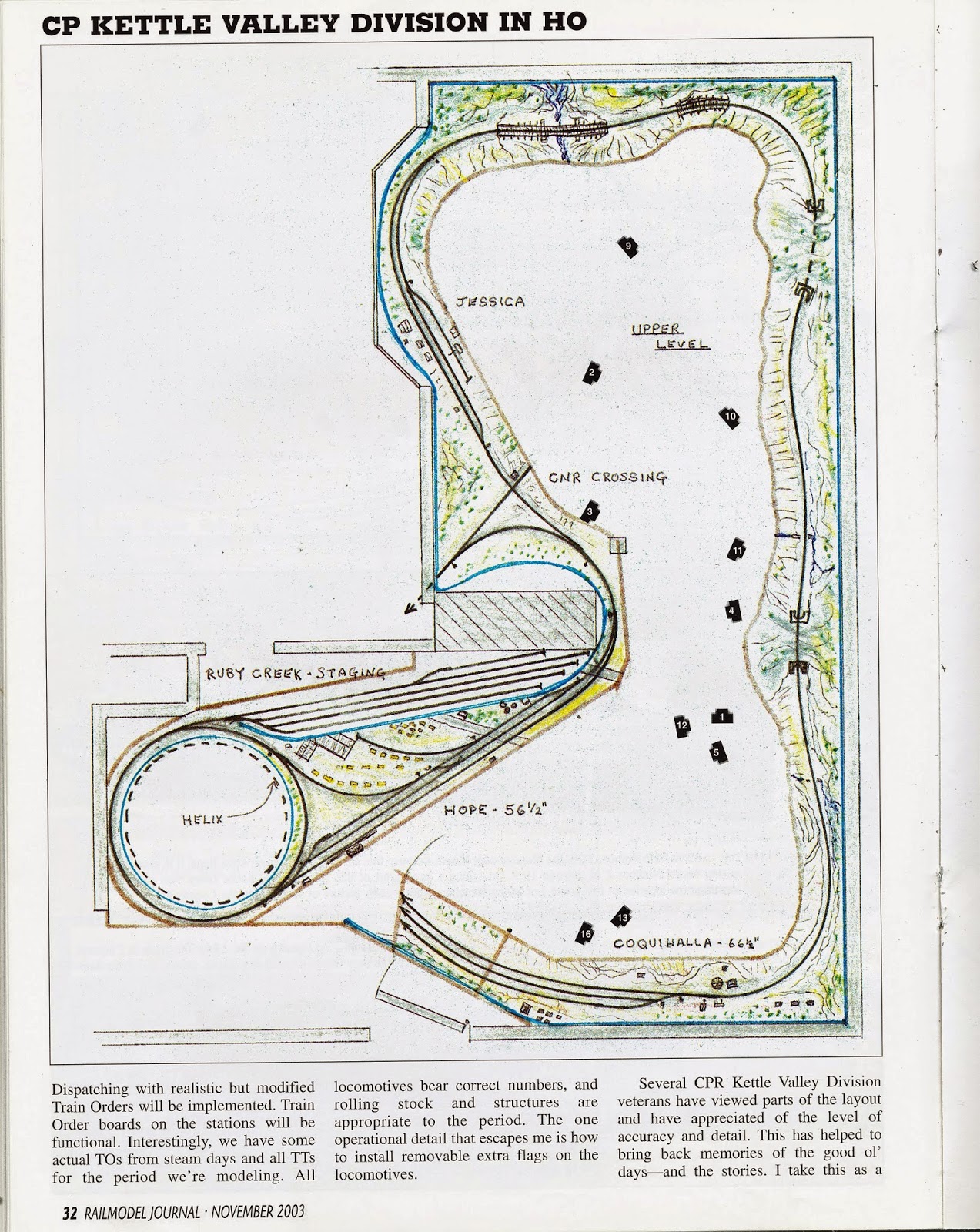 Here is the lower level. The Brookmere railyard is very close to the original track layout in 1949, only diverging in length and the end curves.  And the location of one switch near the water tower has been slightly altered due to the compression that comes with modeling.  Interesting that one veteran railroader spotted the alteration early in his viewing of the layout.  But engineman,  Dick Brocola, complimented the accuracy of the track alignment and scenic elements saying that they truly reflected his memories of working in Brookmere.  We will have more to say on this subject when we treat of Brookmere in depth in a future post.  To the left of Princeton town is the helix tub.  Entry to the main line helix is from the junction switch at Brodie.  Taking the left or normal route the track enters the helix on a 2.2% grade up to the summit at Coquihalla.  The track traverses 4 1/2 turns on a radius of 31" or diameter of 62".  Most of the topmost turn is visible and sceniced.  A train will travel 1.2 scale miles while in the helix.  The elevation gain is 22 1/2" from Brodie to Coquihalla.  The track that diverges from Brodie junction represents the Merritt sub and travels down on its own one-turn helix below the mainline to two staging tracks. 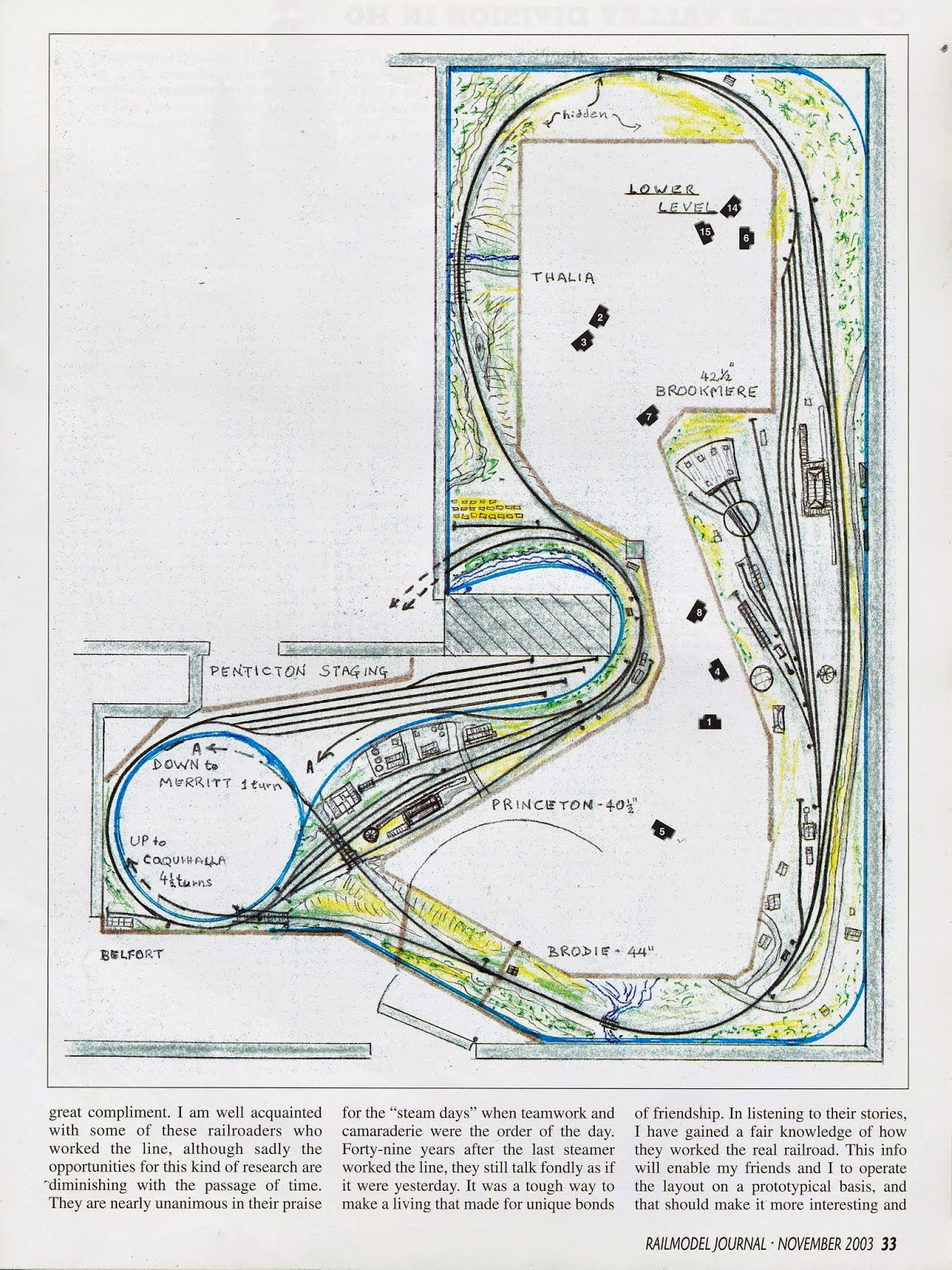 Pages 34 and 35 were a centre spread that has been stitched together by a follower friend.  Thank you Colin.  This is an overview of the Brookmere Railyard looking west.  The caption continues:


"This division point serves as a base for the pushers and is the crew change point between the Coquihalla and Princeton Subdivisions.  The new roundhouse foundation has been poured as part of the plan to rebuild the roundhouse which had been destroyed in a boiler explosion early this year.  The modeling in this scene is very close to full scale in all three dimensions." 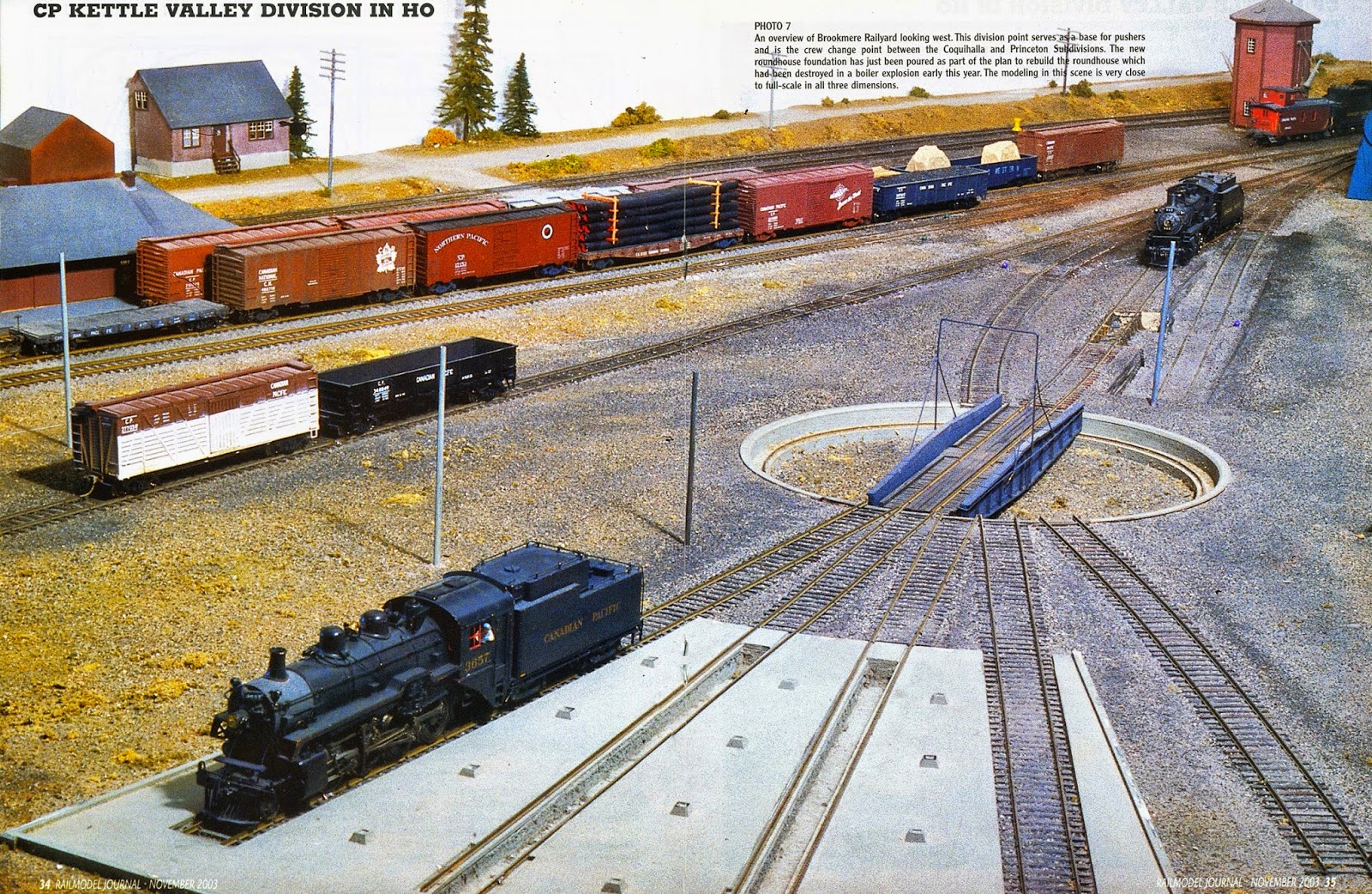 Various shots of the layout are on page 36, photos 4 and 5 trying unsuccessfully to illustrate the entry gate to the layout room.  Photo 5 wrongly denotes the gate as being in the closed position when in fact it is open and in photo 4 it is closed.  Photo 3 is not Coquihalla siding but mileage 19.7.  Brookmere yard is below. 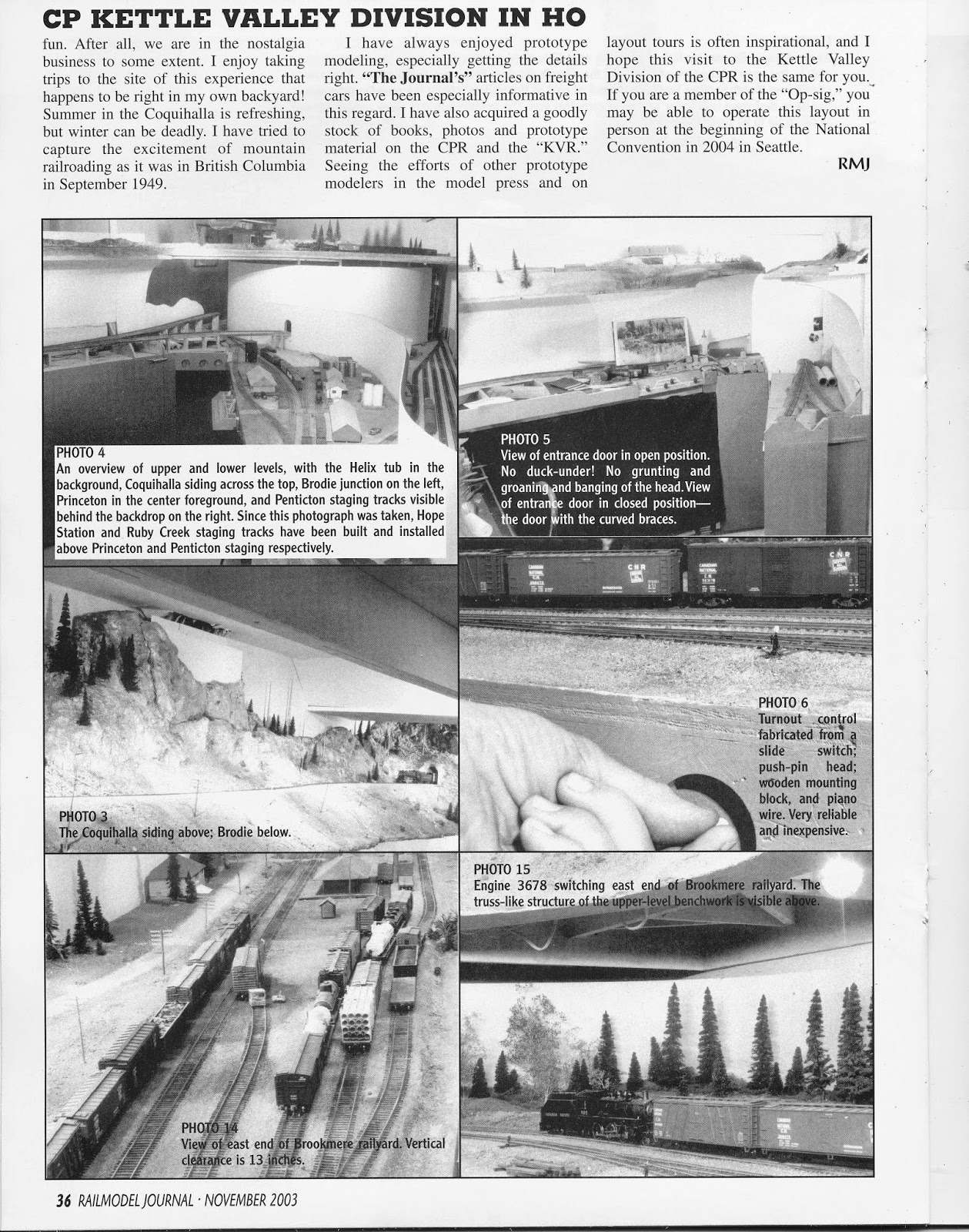 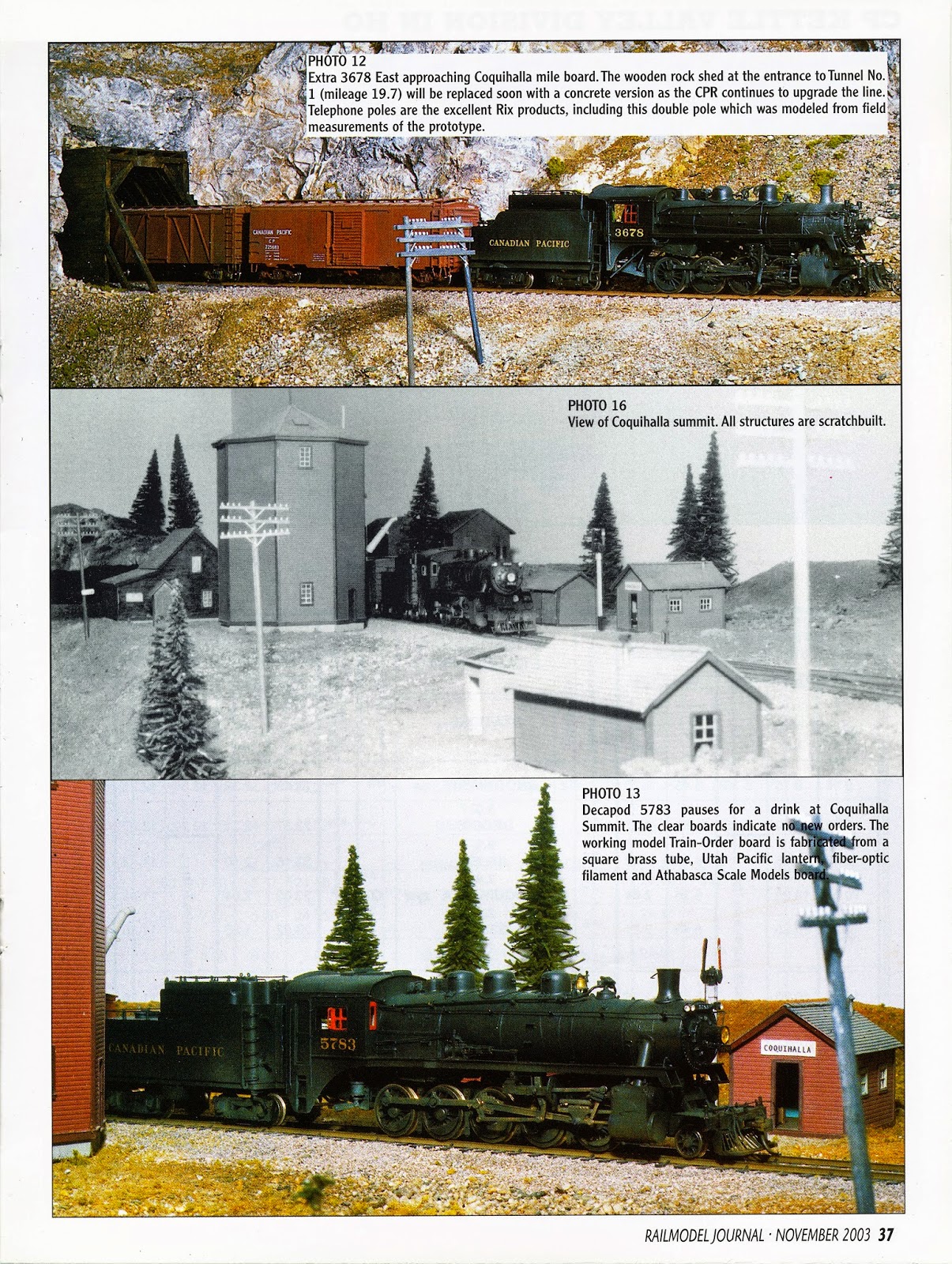 Another two page spread, stitched together again by my friend Colin..  The modeled Timetable here has been superseded by Timetable No. 94.  This model trestle, Mileage 20.6, was built from a timber off the original one, all the wood components being milled in our shop. 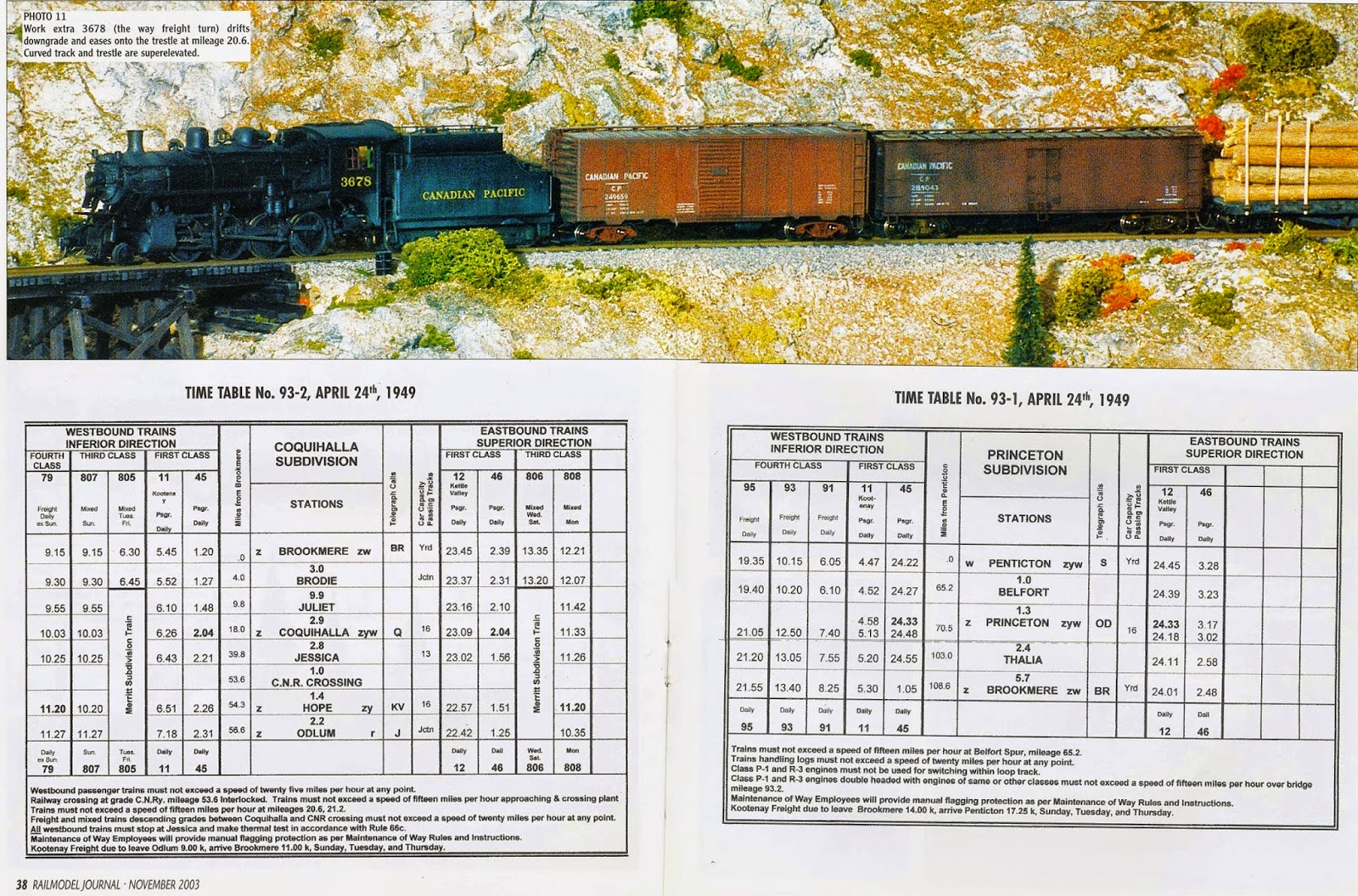 This concludes the article.  Thanks to Robert Schleicher and his inspirational model railroad magazine.
Now that I am un-retired, we will think in terms of bi-weekly posts, meaning that the next post will probably be on Dec 12.
Not sure what the future brings but it will inevitably concern detail on aspects of the prototype Kettle Valley railway and our efforts to represent it in scale.