We continue with our look at logging and the unique log flats of the Kettle Valley railway.  This post will be heavy on photos.  (One day I will acquire a better camera but for now we get by with 6 mega pixels.)  First a magnificent shot of a string of 13 or so log flats waiting to be lifted by the next Westbound way-freight.  Going by the topography, we believe this to be the spur at Mileage 10.2  of the Carmi Subdivision.  The A-frame can just be detected at the right of the photo which we saw in full view in the previous post.   Again we acknowledge the Oliver Museum and Archives for providing this valuable image for our modeling purposes - and to help preserve an interesting bit of history.  A few things of interest to note: the closeness of the loaded cars to the mainline; the height of the log stacks which are somewhat higher than the stakes; the pile of ties nearby; the derail and its sign; the large number of logs stockpiled. 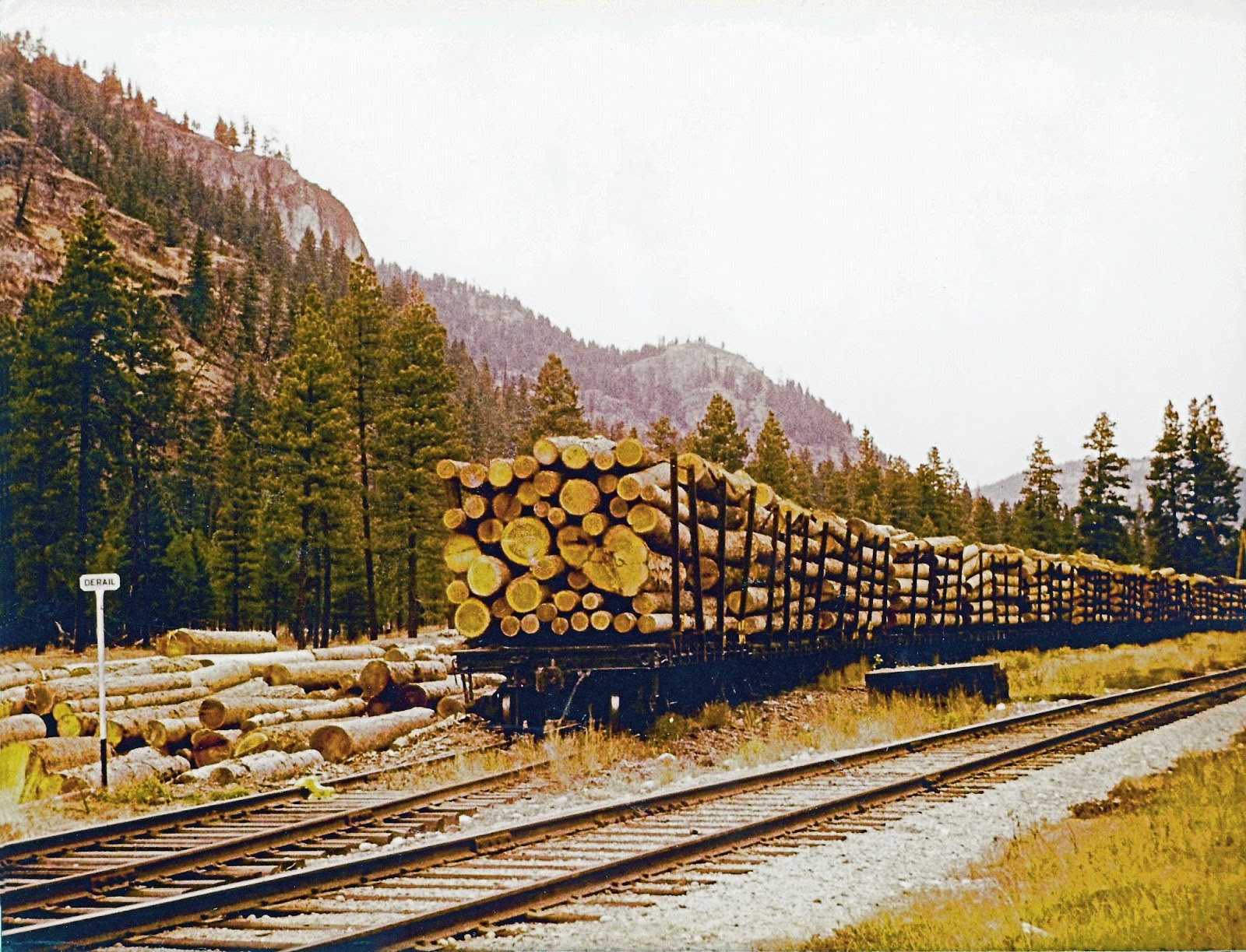 Some of the books and publications on the market provide photos of train consists in which are seen cars laden with lumber, ties and logs in the consists of Kettle Valley trains.  This is what led me to search out the facts - just the facts, ma'm.  Here are some photo sources:


In the shot below, taken in 1920, a Passenger train has just overtaken a locomotive working with a set of log cars which are in process of being loaded.  It appears that the logs are merely rolled and dumped directly onto each flat which presumably would add considerably to their wear and tear - not a desirable eventuality for the owner of the cars.  This also entailed the locomotive spending considerable time while the loggers did their work.  Photo courtesy of the Okanagan Archives Trust Society.

THE LOG FLATS are built from Tichy kits with some modifications.  Just as in the prototype, these log flats were rebuilt from ordinary flat cars of many different series.  Here is a photo of the kit with most of the extra details I use: 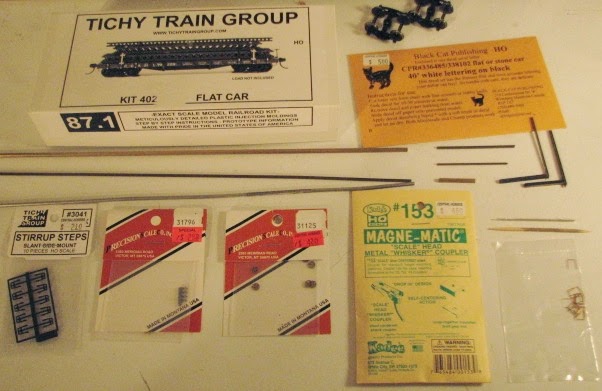 Missing from the photo are the extra weights that are added to the underside of the floor and the cut levers which are made from wire and eyebolts.  On the right beneath the decal package are the pieces used to build the bunks which are made from code 70 or 55 rail and 3/32" brass squares.  These are soldered together and blackened and "rusted up" a little.  The trucks are Accurail's Bettendorf with Intermountain's semi-scale wheelsets.  Wire grabs, wire staff, brass brake wheel and delrin stirrups last much longer than the kit's styrene originals.  I add the retainer valve to the car side as on the prototype.
The end result - with and without the removable load:

I built a few of these cars in days of budget constraints from Athearn flats whose side sills were trimmed off and the sub-frame modified.  As far as I know, no flat cars with fish-belly side frames were converted to log flats so the Red Caboose model would also need the side sills trimmed off.  But the better candidate is the Tichy (or Nor-West) model.  Here is the Athearn:

Note that his one has 11 stake-pockets, whereas the Tichy has 12.  I have seen photos of both.  There were also CPR flat cars with 13 stake-pockets which Nor-West models used to make.  Also note the lack of reporting mark (CP) and the split placement of the car number.  This is necessitated by the narrow space between the stake pockets which did not allow the full six-digit number as in the Tichy example and thus I ran out of space for the reporting mark.  Future models from the Tichy kit will have the appropriate two stake pockets per side separated a little more than usual to accommodate the six-digit number as it is difficult to squeeze them in.  In the case of both models, a recess accommodates the brake-wheel which is lowered during the loading process.  I do not know if the brake-wheels were raised by the brakeman for travel.

Finally, here are three photos that I took of a flat car sitting in the yard at Port Coquitlam many years ago.  Thirteen stake pockets.  Cars like these would have been candidates for conversion to log flats. 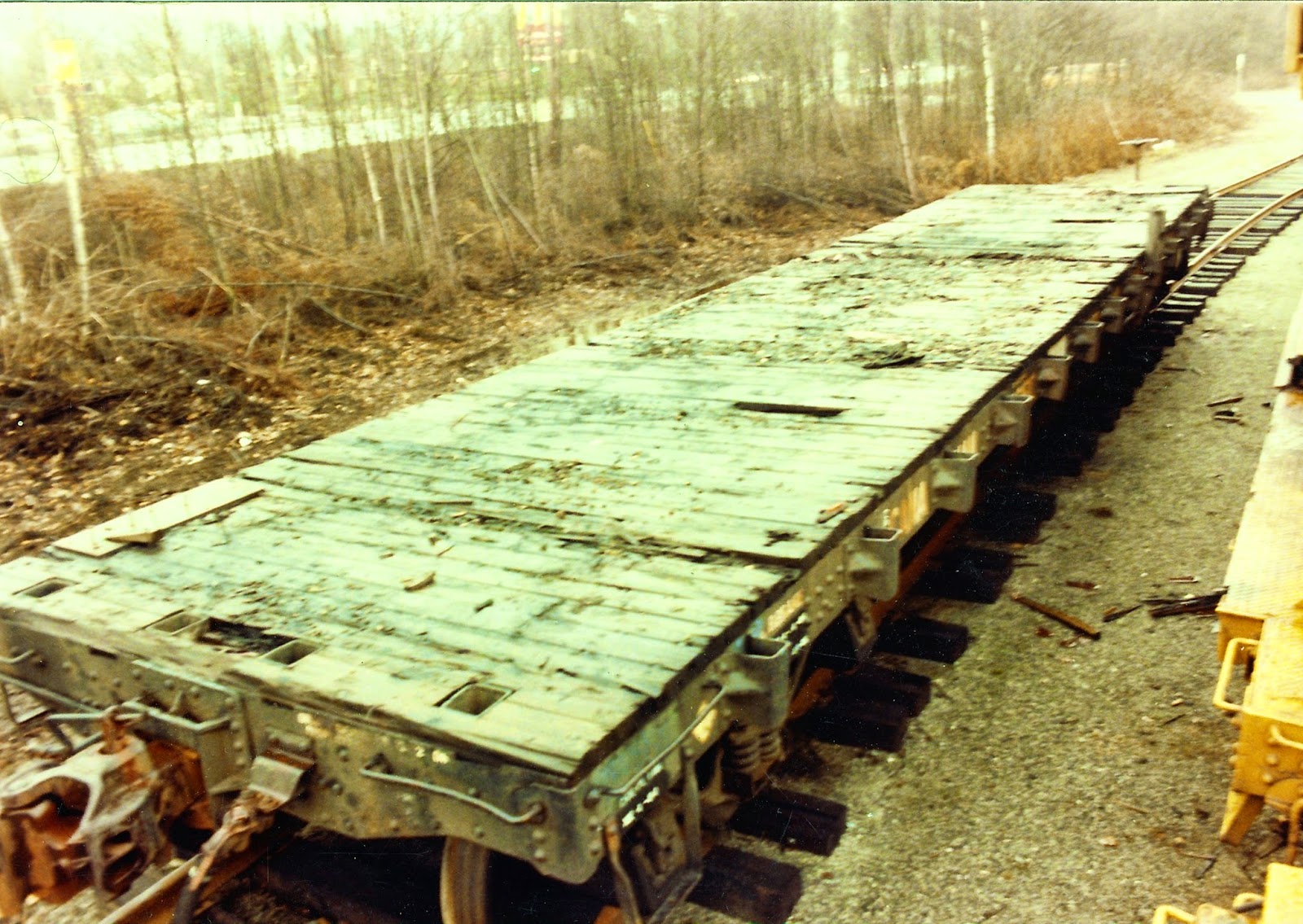 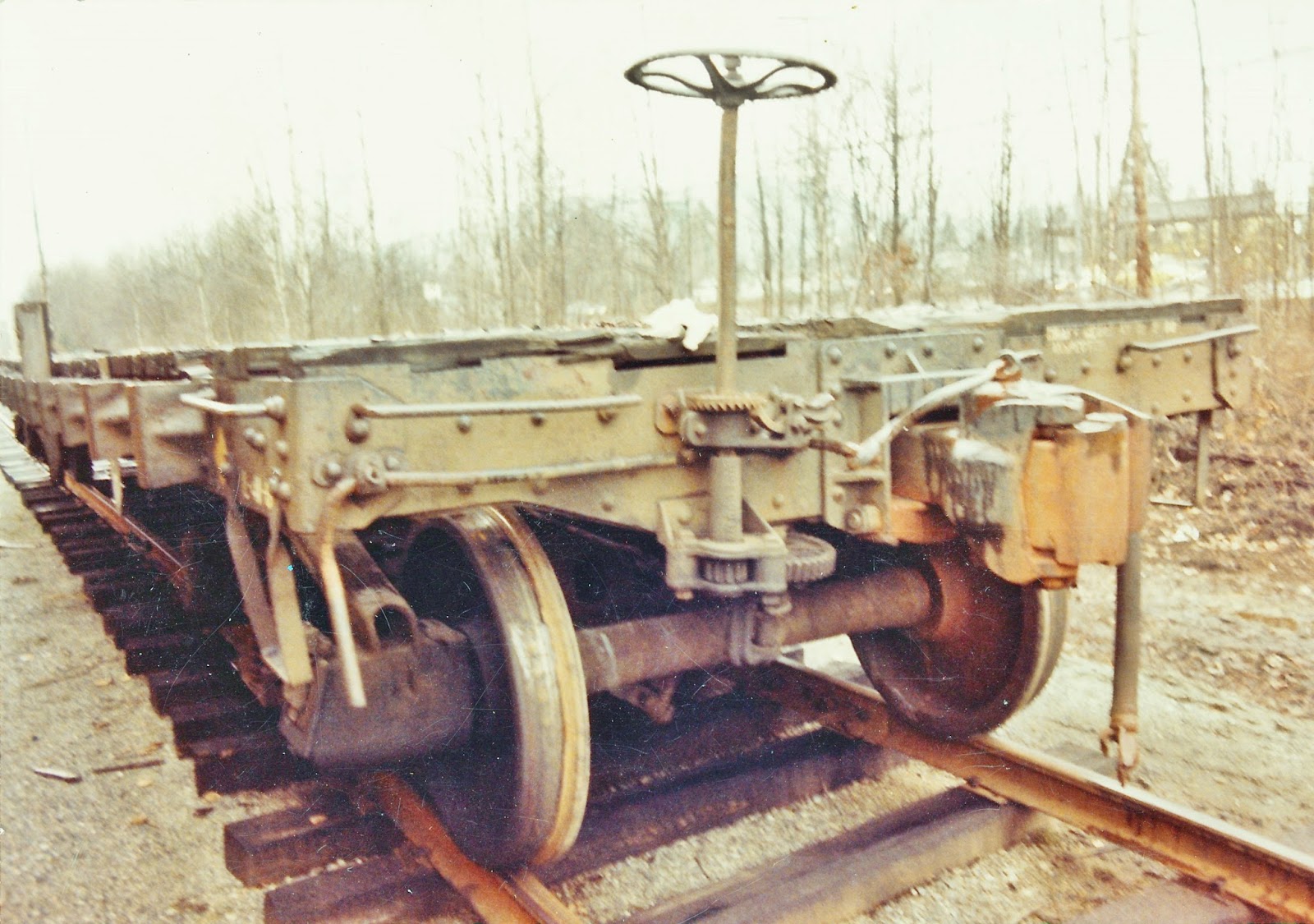 And a drawing of one with 12 stake pockets: 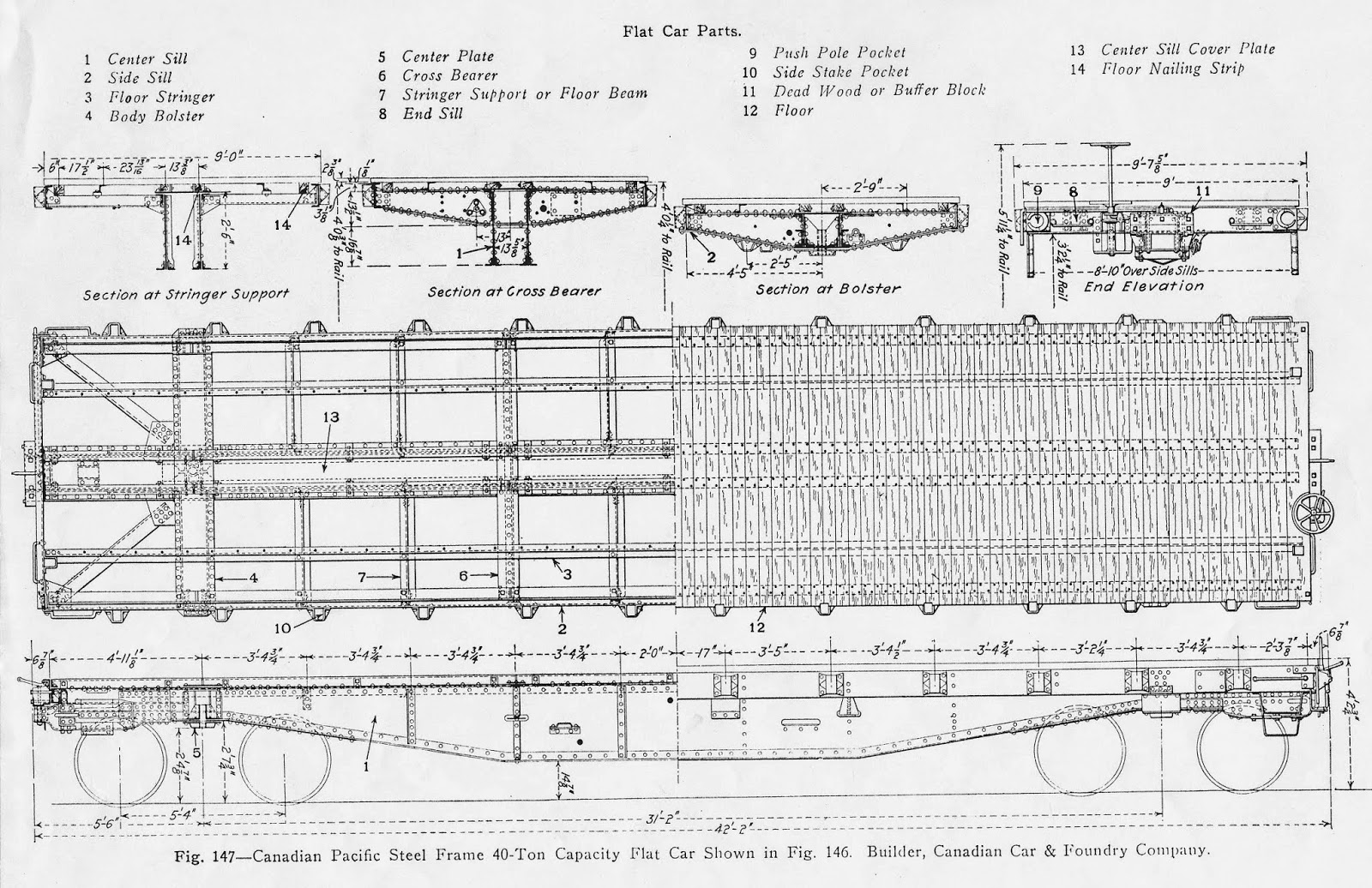 While the car in the drawing may appear at first glance to have fish belly side sills, in fact, the sides are straight and the fish belly is in the centre.  This is quite evident in the section views.  Note also that the pockets are unequally spaced.

Next week we hope to conclude our series on logging, log flats and the K V railway.